Unarmeytsy will show their talents in the technical competition

March 13 2019
45
Unarmeytsy will take part in the All-Russian scientific and technical competition. The event will be implemented at the initiative of the Foundation for Assistance to the Development of Small Enterprises in the Scientific and Technical Sphere. 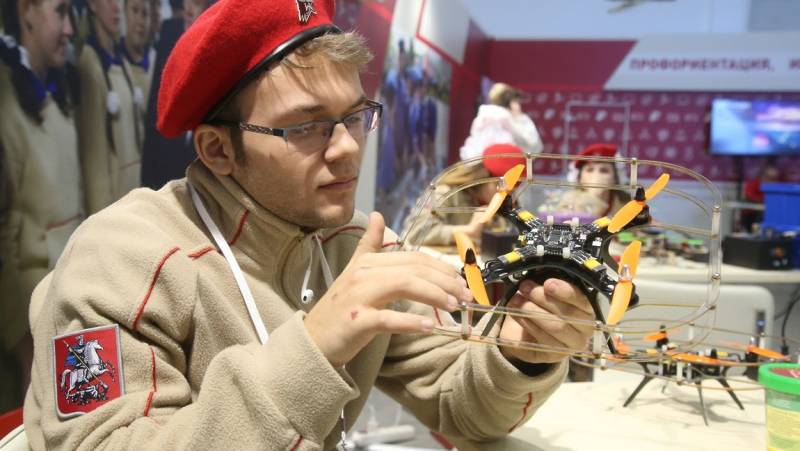 The competition for such a modern theme is intended to involve participants in the multi-media movement in scientific and technical creativity. The children will be able to realize their creative potential, to realize innovative projects for solving modern military and civil tasks with the help of high technologies. The event will also help increase the attractiveness of engineering education. Competitions will be held in three stages: correspondence, full-time and rewarding. The first stage will be conducted by the heads of the regional headquarters of Unarmia together with the regional representatives of the Foundation, it will be completed on March 31. The winners of the absentee regional stage will go to Tula to participate in the second stage, it will be held in May of this year. Awarding of the competition's laureates will be held within the framework of the International Festival of Innovative Scientific Ideas “Start to Science”

According to the rules of the competition, the competition will be held by age groups: the younger group is the 5-8 classes and the older group is the 9-11 classes, as well as in several areas: space reconnaissance, materials science, robotics, UAVs. The last two areas are now very popular with young people: children are happy to attend exhibitions of robots, go to circles for robotics.

We have a lot of guys on the move who are interested in robotics, modeling, design. In the future we will see scientists, researchers, designers from various fields. This could be the army, medicine, ecology and more.

- said Roman Romanenko, Chief of the General Staff of Yunarmia.

Also, the participants of the unarmeysky movement will soon have the opportunity to see high technology in practice: the Ministry of Defense offered to create sections, circles and clubs of technical creativity at the enterprises of the military-industrial complex. A letter with a request to organize such work has already been sent to defense enterprises.

Recall that the youth movement "Yunarmiya" was created in 2015 at the initiative of Defense Minister Sergei Shoigu, and today its number is more than 340 thousand members. The youth association is carefully organized: it has its own symbols, structure, hymn. A special bright and comfortable summer and winter uniform was developed for the participants, which became the hallmark of the movement. At the same time, Yunarmiya is developing on a voluntary basis, with the support of regional and municipal authorities, public patriotic associations, historical societies, deputies and sponsors. By joint efforts, detachments are organized, where any student aged 7 to 17 can join, premises are allocated for events, uniforms and equipment are purchased.

Large-scale work is being carried out with the children in all areas: education, sports training, creative implementation, spiritual and moral education, and social activities. In turn, teenagers who have been through the school of “Unarmia” realize themselves as members of society with an active civic stand: they help the elderly, veterans and orphans, teach the younger generation useful skills, look after the monuments of cultural heritage. And one of the projects of the movement is “Unarmia. Mentoring ”- authorized by the President of the Russian Federation on the rights of the child Anna Kuznetsova cited as an example as an example of effective work with young people. According to the Ombudsman, such work should be implemented at the legislative level throughout the country.