Stalin as the creator of a new reality

March 12 2019
184
The red emperor literally created the future before our very eyes. For ten years, from 1930 to 1940 a year, the Soviet Union went from agrarian Russia to a highly developed industrial power, with advanced science and technology, able to withstand the onslaught of the most advanced power of European civilization - the Third Reich, which was given control of most of Europe. 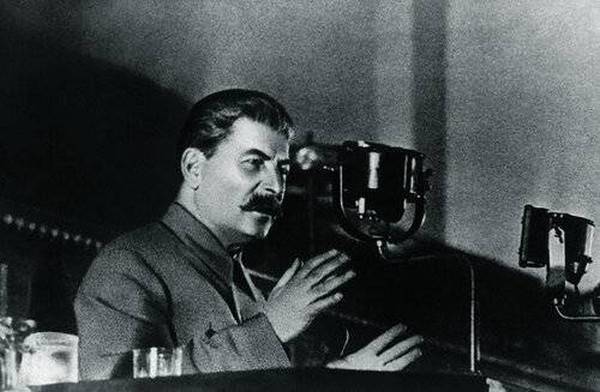 For ten years! During this period, Russia has gone from plows and bast shoes to tank T-34 and rocket artillery. From an illiterate and illiterate population to millions of scientists, engineers and technicians, mechanics and agronomists, teachers and doctors, skilled workers, pilots and tankmen, sailors and radio operators, geologists and builders. In ten years, Russia was completely rebuilt and recreated, thousands of new enterprises were built, agriculture from semi-subsistence became a large commodity, providing the country, cities and the army. In terms of industrial production, the Soviet Union came first in Europe, ahead of such advanced industrial powers as Germany, Great Britain and France, and second in the world.

I remind that The USSR sample 1920-s is a dead end. Finished country, doomed to new unrest and collapse, and external intervention, the division of Russia into spheres of influence and colonies by the leading world powers. According to all analytical calculations, it was coming to an end ahead of the USSR-Russia: either in chaos and the blood of a new unrest caused by an economic catastrophe, or after a military defeat.

At this time, the advanced powers of the West and the Japanese Empire did not stand still and developed rapidly. And in the USSR of the 20s, not a single large-scale industrial or transport project was implemented. Part of the mining industry, oil fields, etc., was transferred to Western concessions. "Official friends" of Soviet Russia like the famous A. Hammer robbed the country, exporting historical and cultural values ​​of the Russian people.

The country's economic mechanism was an ugly symbiosis of administrative planning and the speculative market. Finance for development was not. The gold reserves of the Russian Empire were plundered and plundered by the joint efforts of the white, red commissars and foreign predators. Part of the gold, finance, was taken out of the country under the king. A huge amount of private gold, silver, precious stones, other valuables, cultural and historical monuments were removed and stolen during the civil war. Nobody gave loans. The West blocked foreign trade.

There were no advanced industries. The whole world went to the future. The industrial era has come. And in the USSR there was no engine building, automotive industry, tractor construction, instrument engineering, radio engineering, aircraft manufacturing and shipbuilding, developed metallurgy, and the chemical industry. The country required complete electrification of the industry. The industrial backwardness of Soviet Russia from developed countries became monstrous, deadly. A little more and the army of the western industrial powers and militarized Japan would easily have crushed the Red Army, which remained in the past - carts, cavalry, very few cars, armored vehicles and airplanes, at the same time obsolete models, trophies of the First World War. Without advanced engineering and heavy industry, Russia was waiting for death. Strong and dangerous enemies for backward agrarian Russia were not even such great powers as Germany and Japan, but Poland and Finland.

Soviet cities were drowning in poverty, street children, and unemployment. The dominance of the bureaucracy, which was experiencing a new flourishing, the decline in the quality of management led to an increase in officialdom. The criminal world flourished. The chaos of two wars (world and civil), a revolution led to a criminal revolution. NEP created an economic and social base for crime. In 1920, a whole wave of theft and fraud took place. Suffice it to recall the famous novel “The Golden Calf” by Ilf and Petrov. There was a link of corrupt bureaucracy, the party-state, economic apparatus with the criminal world. A similar picture will occur in the country during the late Gorbachev and early 1990-s.

Agriculture was abandoned in the Middle Ages, where horses or own hands were used instead of tractors and mechanical machines. The former large farms (landowners) were crushed, new ones could not be created. Marketability plummeted. The village returned to subsistence farming, most of the farms worked only to feed themselves.

In 1927, the grain harvest crisis began. The apparent stability of NEP collapsed. Cities with outdated, weak industries could not meet the needs of the village. In response, the village refused to give bread. Had to enter food cards. Over the country again became the ghost of a new peasant war, famine. The USSR in the late 20-s crawled to a new bloody distemper. To a new confrontation between the city and the village, the collapse of the "independent" Bantustans, a wild massacre of Russians on the national outskirts.

Moreover, the psychology of the people was distorted by the three-century domination of the “Russian Europeans,” the Romanov dynasty. The division of the people into masters and serfs. The bloody First World War, which claimed the lives of millions of the healthiest men. The catastrophe of 1917 of the year, the fratricidal civil war - the real inferno (hell) on earth. He left his mark on the terrible famine of the 1921-1922 years, comparable in its deadly consequences to the medieval "black death". In this terrible time, the ethics of work and morality were forgotten. People are used to death and violence. It seemed that violence was a universal and very effective means to solve any problems. There were entire armies of people in the country who were accustomed to violence: professional revolutionaries who only did what they destroyed throughout their conscious lives; the intelligentsia, which was initially brought up in hatred of Russia (tsarist, generally “this country”), which could only criticize, subvert, and discredit - great powers (empire), Christian faith and religions in general, “obsolete morality”, old art and history, etc .; heroes of the civil war, veterans of the Red Army, and the defeated former white, green, nationalists, bandits, basmachi, former Socialist-Revolutionaries, anarchists, etc. Thus, human capital in the country was at an extremely low level. It was wildness and decay. People were ready to steal, kill, but forgot how to build, produce, forgot about order and discipline.

At the same time, with the new internal turmoil, it was worth waiting for the invasion of the whites, who still retained the cadres, organization and combat effectiveness in Europe and China, and waited for an opportune moment to return. The interventionists would come on their shoulders again - the Japanese, the Poles, the Finns, the British, the French and the Americans. Soviet Russia had no friends. The great powers of the West and Japan planned to dismember Russia, to get its wealth at its full disposal. Finland, Poland, Romania and other neighbors dreamed of creating great powers on the ruins of Russia. The old world, and then it was almost the entire planet, was hostile to the Soviet, new world. Soviet Russia was planned to be destroyed, crushed.

With the preservation of NEP in Soviet Russia, the implementation of programs of the left or right opposition within the party or even the program of the White Project (who was defeated in the civil war), death was inevitable. The war against the developed West or Japan, or the new peasant war, between the city and the countryside, which was lost to the developed West or Japan, became the detonator of disintegration, disaster. Thus, in the 1920s a new civilizational catastrophe was brewing, the collapse of the country could occur in the 1930s. Giant sacrifices in this case were inevitable. The question was whether they would not be in vain and would not lead to the complete and final destruction of Russian civilization. Or will they still allow to materialize a new reality, a new world-civilization of the future, and repel the impending strike of the old, predatory capitalist world? Create a Soviet superpower and start promoting the Soviet (Russian) global project to create a fair world?

Stalin, the Russian Communists set the task of building the world - the creation of a new world, the civilization of the future based on social justice, ethics of conscience and labor. Society of knowledge, creativity and ministry. It was a Soviet (Russian) globalization project. The Western project to create a global slave-owning civilization, a society of slave owners and consumer slaves, received an alternative.

However, it is not enough to set a goal, it is necessary to materialize it. Create a fabric-infrastructure of a new reality: middle and high schools, houses of creativity and culture, design bureaus and research institutes, factories and plants, collective farms and machine and tractor stations, rebuild cities for new housing and urban transport, build roads and railways, water and oil and gas pipelines, power plants and much more. Create the material basis of the new world. There was practically nothing of this in the USSR after the Civil War. That which was there was destroyed, ruined, plundered.

Stalin understood this very well and brilliantly solved the infrastructure problem. During the implementation of the first five-year plan, 4 February 1931, the Soviet leader said at the First All-Union Conference of Socialist Industry Workers: “To keep up the pace means falling behind. And the backward are beaten ... Would you like our socialist fatherland to be beaten and that it lose its independence? But if you do not want this, you must in the shortest possible time eliminate its backwardness and develop the true Bolshevik pace in the construction of its socialist economy. There are no other ways. ... We are behind the advanced countries by 50 – 100 years. We must make good this distance in ten years. Either we do it, or they will crush us. ”

Summing up the first five-year plan 1929-1933, Stalin said that in the USSR there was no ferrous metallurgy (the basis of industrialization), the tractor and automotive industries — now there is. For the production of electricity, for the production of petroleum products and coal, we stood at the very last place, now moved to the first places. From a country that was weak and unprepared for the defense, the USSR became a mighty military power.

By the beginning of World War II, the red emperor was able to create the second most powerful economic power of the planet. Thanks to this economic and military foundation, the USSR won a brilliant victory in the Great Patriotic War, returned the “debts” of the First World War to Germany and Japan. Thanks to this foundation, the country in a few years recovered from the worst war in the history of mankind. It became a superpower, which successfully opposed the whole of the West, that is, the union of the most developed (in the technological, military-economic sphere), advanced countries on Earth. It was then that the vast majority of industrial enterprises were built and laid, the foundation of developed agriculture was laid, transport infrastructure was created, cities were built, and the country's defense was built. We still live by the fruits of that great Stalin era.

We are in Yandex Zen
Keys and swords of "Beelzebubs". From the history of the Corps of Mechanical Engineers
Service history "Admiral Lazarev" - "Red Caucasus"
184 comments
Information
Dear reader, to leave comments on the publication, you must to register.