March 19 2019
23
He lay facing the country of the Spanish Moors,
So that Karl said his squad glorious,

That Count Roland died, but he conquered!
(Song of Roland)

When the Moors consistently smashed the Christian kingdoms in Spain, they failed to destroy them to the end. On the southern slopes of the Pyrenean Mountains, the world (or reserve) of the Christian faith continued to exist, represented by several small but nevertheless quite self-sufficient kingdoms, with Navarre playing the main role. By the middle of the XI century, when the Muslim city of Tudela was captured in 1046, it actually reached its borders. After this, Navarre’s military efforts were aimed at assisting other Christian states outside its territory and preserving their own independence, both from Muslims and from fellow Christians. 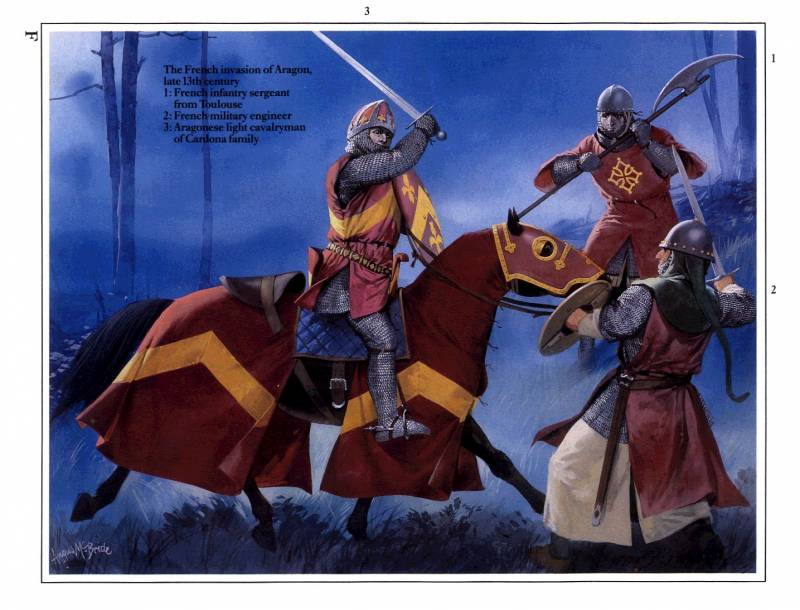 Figure of Angus MacBride, depicting a Spanish knight of the XIII century. He is opposed by two infantrymen, one of whom has on his surco a Toulouse cross.

By the beginning of the XII century, the kingdom of Aragon also already existed, being the western part of the French county of Barcelona. Unlike Navarre, Aragon tried to push its possessions south even after reaching a common border with Castile in 1118. A century later, Aragon completed its part of the Spanish Reconquista, capturing the Balearic Islands (1229 — 1235) and the Dénia Peninsula (1248). All this, as well as the absorption of Catalonia by Aragon in 1162, strengthened the position of the Aragonese not only on land but also on the sea. Soon they began to compete with the "Angevin Monarchy" for control of Sicily and southern Italy. 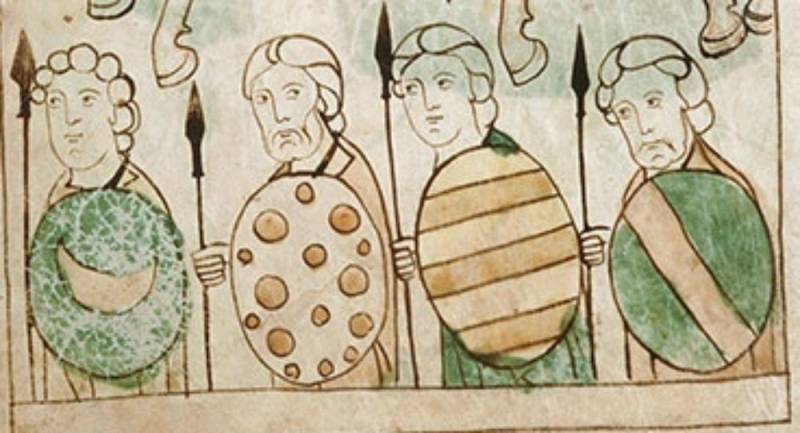 Miniature depicting the warriors of the kingdom of Navarre from the Navarre Illustrated Bible, dated 1197, Pamplona, ​​Spain. (Amiens Metropol Library)

As for Catalonia, in the first half of the 11th century it was divided into at least eight counties, and all were theoretically vassals of the French crown. By the time of the First Crusade, they were largely united and able to take part in the Reconquista, moving south as far as Tortosa, taken in 1148 year. The main thing to emphasize is that all these kingdoms were under strong military influence from southern France since the eleventh century. However, there were clear differences between different regions in Northern Spain. So, Navarre, being almost exclusively a country of mountains and valleys, never sought to break into the plains of central Iberia. That is why the main role in her army was played by infantry. Moreover, Navarre infantrymen, armed with long spears, were highly valued and used as mercenaries in many parts of Western Europe in the 12th century. The same applies to the neighboring and militarily similar Basques and Gascons. About the latter it is known that they often used bows instead of darts. Navarre infantry was popular in the XIV century, when the kingdom of Navarre itself began to use mercenary Muslim troops, perhaps from the Tudela region. It is believed that these very horsemen were the forerunners of the later Spanish cavalry ginet, dressed in chain mail and armed with short spears, swords and shields. 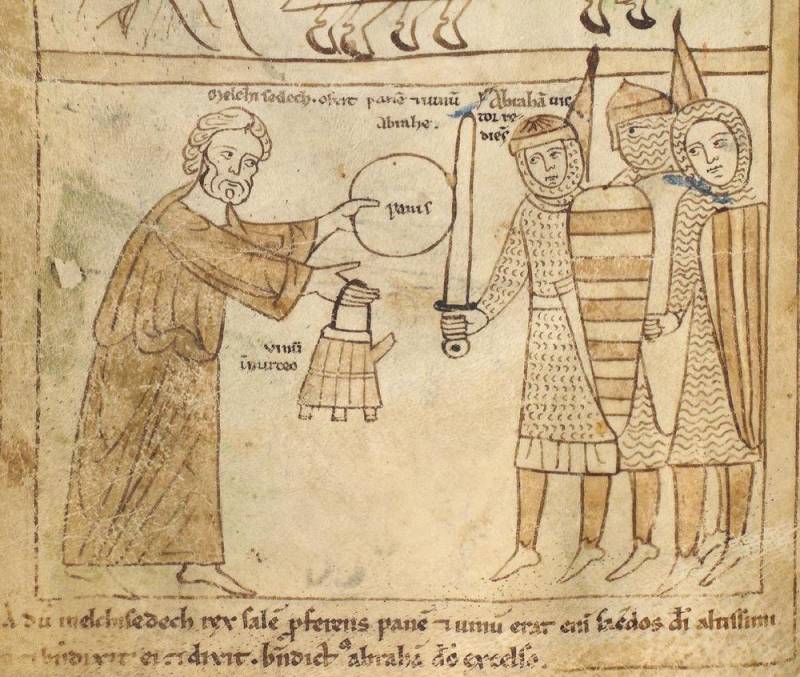 Spanish warriors from the Pamplona Illustrated Bible and the Life of Saints, dated 1200 (University of Augsburg Library) 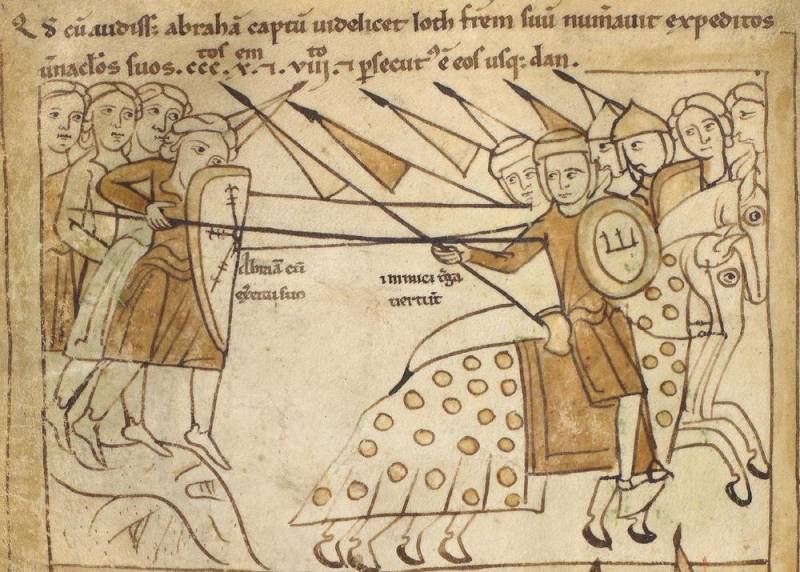 The same source. Image of riders fighting with infantry. Note the unusual shape of the pennants on the spears and the fact that the horses are already covered in blankets.

In Aragon, light cavalry also began to play an important role, as the kingdom began to expand its holdings along the Ebro plain. In the meantime, most of the Aragonese mercenaries who fought outside the Iberian Peninsula were also all infantry. The most famous and characteristic of such Aragonese troops were the Almogavars or “scouts”. Almogavars are known to have fought besides Spain as mercenaries in Italy, the Latin Empire and in the Levant during the XIII-XIV centuries. Almogavars were originally from the mountain regions of Aragon, as well as Catalonia and Navarre. They usually wore lightweight helmets, leather armor, breeches and half-ades of sheep and goat skins; there are coarse leather sandals on their feet. 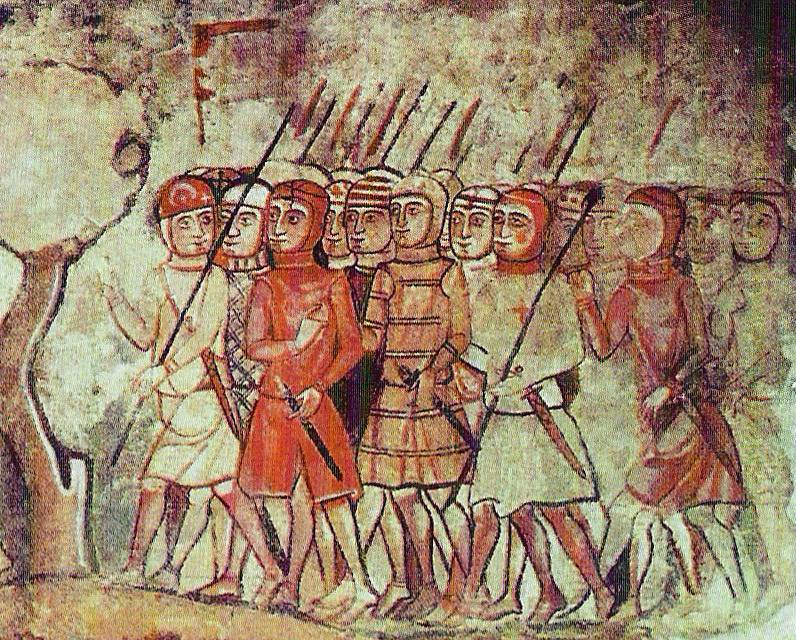 Almogavar troops during the conquest of Mallorca. Gothic fresco from Salo del Tinel (The Throne Hall of the Royal Palace) in Barcelona. 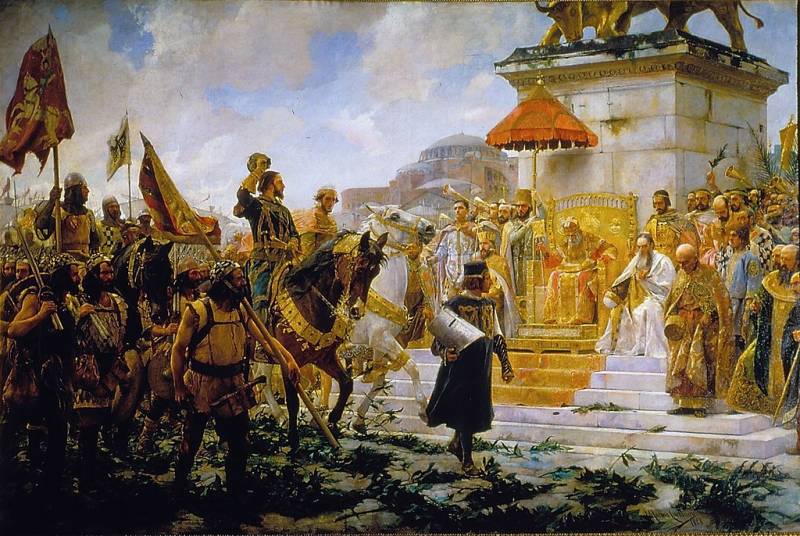 H. Moreno Carbonero. The entry of Roger de Flore into Constantinople (1888). Almogavars are in the foreground.

The almogavars were armed with short spears used for throwing, or lighter darts, as well as a wide cleaver, an analogue of felchen, hanging on a leather belt along with a shopping bag or a bag for small things like flint and tinder. For a decent fee, they served the cities, the monarchs, and the churches, and it is not surprising that both the Swiss mercenaries and the same landsknechts appeared later. Previously, they did not have such a need, and besides, the same Swiss cantons did not start serious wars at the beginning. And the mercenaries were supplied by states such as Scotland, Ireland and ... Navarre with Catalonia, and Aragon! 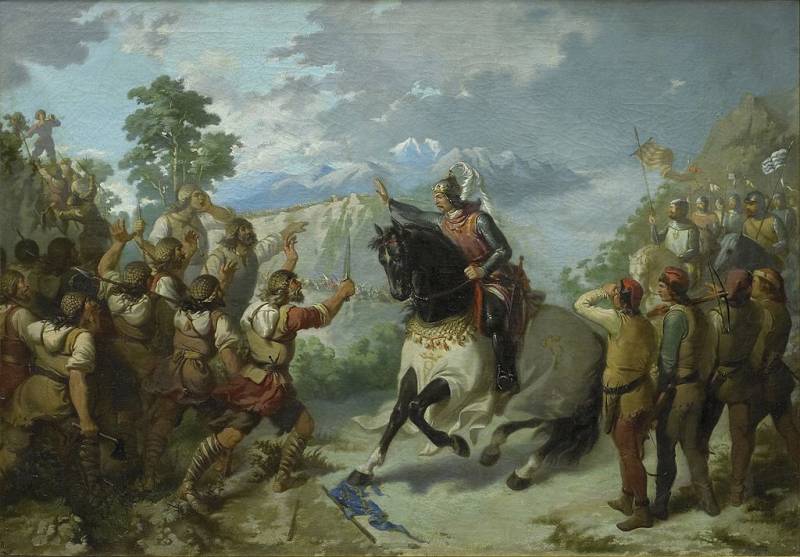 As for the cavalry, for example, it is known that the Catalan horsemen still served as mercenaries in the Muslim armies of Murabita at the beginning of the XII century, but by the XIII century, the crossbowmen were the most valued among professional Catalan soldiers! The fact is that both the Catalans and the Aragons actively fought at sea, and here the use of the crossbow has acquired particular importance. In addition, its use against Muslims did not fall under the restrictions of the Christian Councils, and this was important. The soldiers of that time were devout people and remembered that hell and fire hell await sinners, so they tried to fight as much as possible, but not sin! Gunshot weapon in Spain began to be used quite early. For example, it is known that in 1359, Aragon used bombers to protect one of the ports.

Fresco depicting the Battle of Portopi, approx. 1285 - 1290 from the palace of Berenguer d'Agilar in Barcelona, ​​which today is stored in the National Museum of Art of Catalonia in Barcelona. 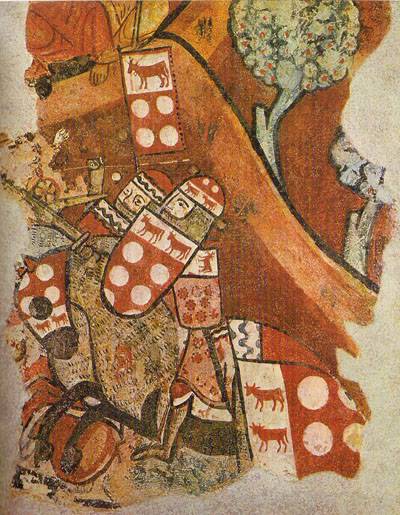 Fragment of fresco depicting the Battle of Portopi. It depicts Guilhem Ramon de Moncada or Guillermo II, the lord of Montcada and Castelvi de Rosanes (in Catalonia), Viscount Bierna, Marsan, Gabardana and Broulois (in the south-west of modern France). On its shield, surco, a helmet and a horse blanket, the front of which is made of chain mail (!), Shows the coat of arms of Moncada and Bearn.

Interestingly, the Almogavar infantry went into battle with the Catalan battle cry "Desperta Ferro!" (Wake up, iron!). At the same time, they also sparks from stones and rocks, hitting them with spear tips and darts! The first mention of this cry is found in the description of the Battle of Galliano (1300), and it is also reported in the Chronicle by Ramon Muntaner. Other variants of the battle cry were appeals: Aragó, Aragó! (Aragon, Aragon!), Via Sus! Via Sus !, Sant Jordi! Sant Jordi! (Saint George! Saint George!), Sancta Maria! Sancta Maria! (Holy Mary! Holy Mary!). 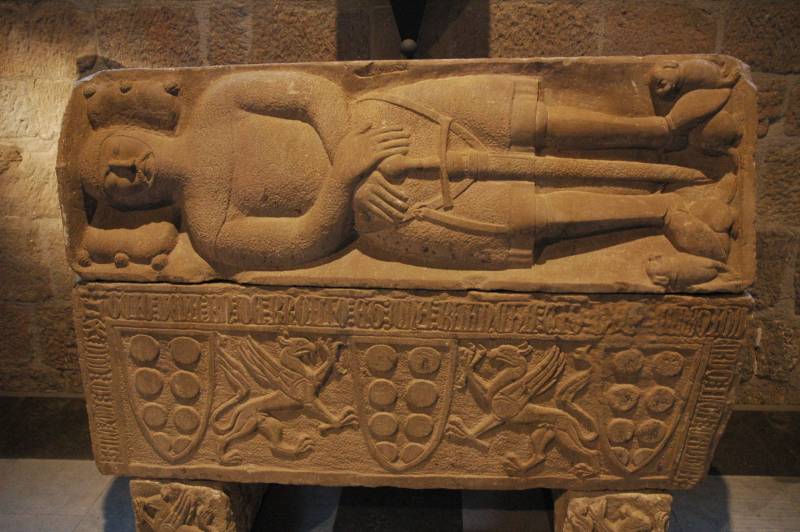 Bernat de Brulle Effigia, 1345 (Church of Sant Pere de Valferos, Solsana Catalunya). For some reason, there is no surcoat on it, but the chain mail hood with a hood and chain mail gloves with fingers are clearly visible. On his feet plate greaves.

There are quite a few efigy in Spain, which allows us to imagine quite well how the Spanish knights of 1050 - 1350 were armed. For example, the effigy of a member of the Castellet family, approx. 1330, from the Basilica of Santa Maria, in Villafranca del Penenes in Catalonia. There is a complete similarity between it and the image of the Christian warriors depicted on the wall painting "The Conquest of Majorca." The most noticeable detail is the surcoat kaftans with medium sleeves and decorated with heraldic images, worn over the armor. By 1330, the Catalan knight also wore plate gauntlets with bell cuffs and plated greaves. 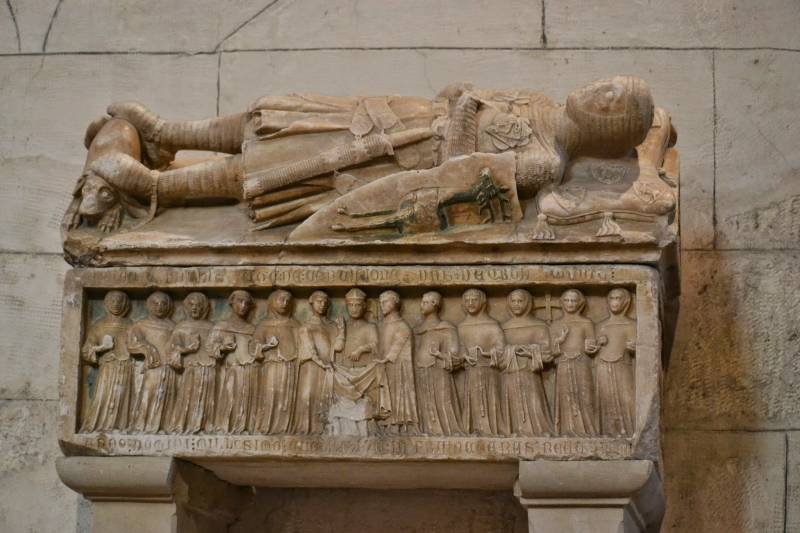 Effigia Bernado de Minorisa, Catalonia, ca. 1330 (Church of Santa Maria de la Seo, Manresa, Spain), on the contrary, shows us a knight who wears the latest European weapons and armor. And he really looks more like the knights of eastern France and Germany than of his Spanish compatriots. His mail hood is put on a soft base, because of which his head seems almost square, and why this, by the way, is clear - this is necessary so that it is more comfortable to wear a large helmet with a flat top on your head. He does not have lamellar armor on his hands, and the only sign that he can wear anything else besides a chain hauberk is his surcoat, which may well hide additional armor from the plates. Legs are covered with greaves, and sabatons are on the feet. He has a very big sword in his hands, and a dagger is hung on the belt to the right. 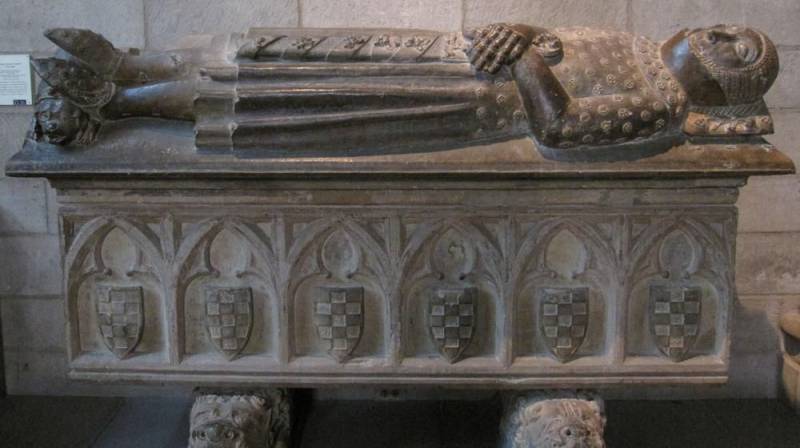 But the most remarkable specimen among all Spanish effigy is a sculpture on the sarcophagus, owned by Don Alvaro de Cabrera the Younger from the church of Santa Maria de Belpuy de las Avellanas, in Lleida, in Catalonia. It has a number of distinctive features characteristic of Spanish, Italian, and, possibly, Byzantine-Balkan weapons. First of all, it concerns plate gorget to protect the neck, attached to the collar, lying on the shoulders. For the time of making effigy, it was a very modern thing. In the decoration of the collar used the same floral motif, which is visible on the rivets on the top of the surcoat, and on the sabatons of the figure. Almost certainly, this suggests that under the fabric there was some kind of metal or leather lining of scales, or metal plates, which, however, this fabric hides. 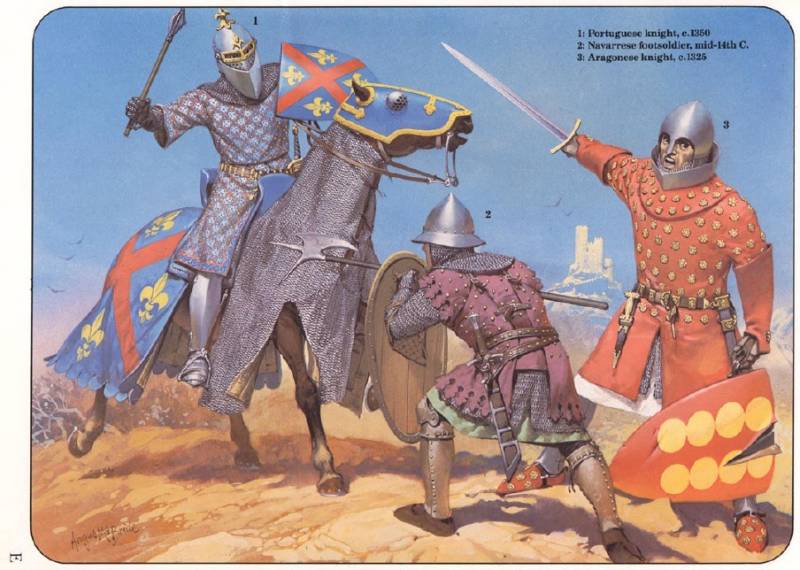 Reconstruction of the appearance of the armor of Alvaro de Cabrera the Younger (in the figure on the right). Fig. Angus McBride

Among other features of interest, one should note mittens with surprisingly long cuffs, which, in fact, replace such an important part of plate armor as wambras. Although it seems that they are metal, but most likely they were made of leather. Greaves have hinged attachments and are therefore almost certainly made of iron. Sabatons of the plates, while the rivets have a floral pattern, comparable to the pattern of rivets in the surco.