March 11 2019
36
Scientific and design organizations of the United States continue to work on the creation of promising hypersonic weapon systems. Recently appeared next news about one of these projects. DARPA and the relevant authorities of the United States Air Force reviewed the received technical proposals for the Tactical Boost Glide program and selected the most successful project to be developed. The contract for the execution of the necessary work was given to the company Raytheon.


5 March, the press service of the company "Raytheon" and announced the victory in the competitive part of the promising program Tactical Boost Glide. Agency for Advanced Study DARPA has entered into a contract with the company worth 63,3 million dollars. Now Raytheon, DARPA and the US Air Force should jointly continue research and development, the result of which is expected to become a prototype, and then a full-fledged promising model of weapons. 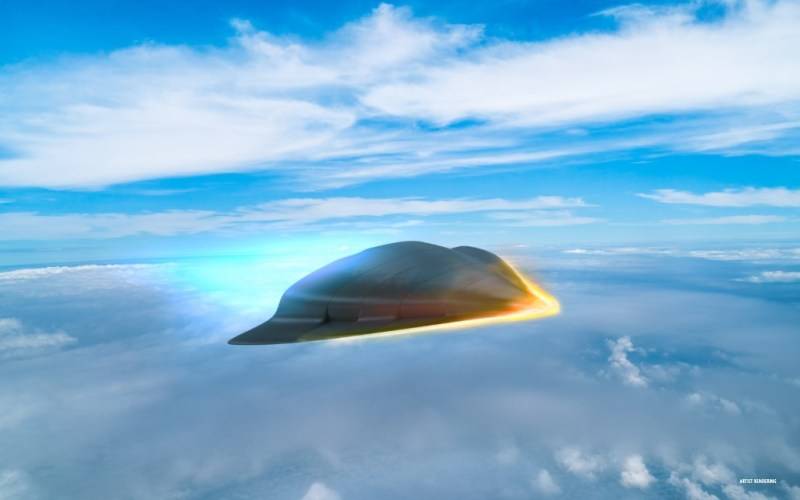 In a press release about getting a contract, the words of Thomas Bassing, vice president of Raytheon Advanced Missile Systems, are quoted. He noted that the new order from DARPA is joining a growing number of hypersonic programs implemented by Raytheon. The company works closely with its customers, which is necessary for the rapid creation and implementation of new developments. The goal of all this, according to T. Bassing, is to provide the armed forces with new tools suitable for responding to current threats.

Unfortunately, DAPRA and Raytheon do not provide any new technical or organizational details. Also, the expected completion dates and their prospects in the context of real rearmament remain unknown.

The first reports of the new DARPA agency program called Tactical Boost Glide (“Tactical planning winged combat unit”) appeared last summer. Then it was reported that the Agency plans to attract several defense enterprises for the further development of promising hypersonic weapons. In the coming years, it was planned to conduct the necessary research and development work.

According to foreign press reports, the goal of the TBG project is to create a missile system, including a booster rocket and the actual planning combat unit. The latter should reach the speed of the order of M = 5 and show the range at the level of 500 nautical miles (926 km). Some of the features of the project were not disclosed.

Last summer it became known that Lockheed Martin and Raytheon were willing to participate in the TBG program. In mid-July, the publication Aviation Week wrote that in "Raytheon" refused to discuss the company's participation in the new project DARPA. It was noted that negotiations are already underway, the results of which will be a necessary decision. Information of this kind about the Lockheed Martin project did not become public knowledge.

Some information about the TBG program is provided in a short note on the DARPA official website. Official material recalls that weapons systems with flight speeds greater than 5 sound speeds have a high combat potential, since they are capable of covering large distances in the shortest time. Such weapons can provide a significant increase in the strike power of the American army, including in conditions of increasing enemy capacity.

Tactical Boost Glide is a joint program of DARPA and the USAF. The goal of this program is the study and development of technologies, on the basis of which in the future it will be possible to create new types of hypersonic airborne tactical weapons. Such weapons will be made in the form of a complex, including a booster rocket and a planning combat unit.

According to DARPA, the TBG program has three main objectives. The first is confirmation of the fundamental possibility of creating an aircraft with the desired characteristics. It is necessary to substantiate at the theoretical level the possibility of implementing a project that meets the requirements of the customer. The second task is to confirm the effectiveness of advanced weapons in the intended conditions of use. The third task is to ensure accessibility. As a technology demonstrator, future serial warfare products should not be expensive or difficult to operate.

The TBG program is divided into two stages. During the tests it is planned to carry out checks on the ground and in the air. This will allow to work out the critical technologies and show the real capabilities of the system created on its base. It is proposed to use a systematic approach for the formation of the appearance of the demonstrator and the subsequent work on the combat system.

In the framework of the new TBG project, DARPA specialists propose using the already mastered technologies created in the framework of previous programs. So, the source of the necessary solutions can be the Hypersonic Technology Vehicle 2 project (HTV-2), also known as the DARPA Falcon Project.

March 2, a few days before the news of the contract with Raytheon, the director of the DARPA agency Stephen Walker revealed some of the plans for the current 2019 year. According to him, this year DARPA will conduct a mass of tests of hypersonic weapons. The exact types of products planned for testing were not mentioned. S. Walker also said that the leadership of the United States provides insufficient funding for the development of hypersonic technology.

Taking into account all the available data on the project Tactical Boost Glide, you can make an approximate picture of events. The program started last year, and to date, two US defense companies have prepared their versions of preliminary projects. The most successful DARPA and the Air Force considered the development of Raytheon Advanced Missile Systems. Now this company will have to master 63,3 million dollars and submit a new version of the project. Whether the newest contract provides for construction and testing of prototypes is unknown. Perhaps these works will be carried out under the following agreement.

Of great interest is the concept of weapons proposed by DARPA for implementation in the TBG program. We are talking about an aviation missile system of a tactical or operational-tactical level, built using a planning combat unit. From an architectural point of view, this will be a typical boost-glide weapon (“acceleration and planning”), including two main elements: a rocket and a planning warhead. Known wishes of the customer in terms of flight performance.

The name of the project mentions the tactical scope of the use of promising weapons, which may be a hint of some of its technical features. It can be assumed that the TBG complex will have limited dimensions and mass, which will allow it to be used with front-line aircraft aviation. However, the finished product can be larger and heavier, which is why tactical missiles will have to be used by strategic bombers.

If the assumptions about the small size of the complex correspond to reality, then Raytheon will have to solve a number of complex problems. First of all, it is necessary to adapt existing technologies for a new project with its characteristic limitations. A similar reworking of existing solutions in the field of guidance and control tools is also needed. If the task of reducing the size is missing - the project still will not be easy.

Modern projects of hypersonic systems offer the use of conventional and special combat units. Size restrictions may lead to the fact that the TBG combat unit will be able to carry only a conventional charge. In addition, it is possible to use a kinetic method of hitting the target. DARPA and Raytheon are not in a hurry with explanations on this topic.

The US is openly talking about the development of hypersonic shock systems as a response to similar projects in Russia and China. In this regard, our country should create not only its own advanced weapons, but also means of protection against foreign threats. In the context of the TBG program and other projects of this kind, creating effective remedies can be extremely difficult.

It is considered and constantly mentioned that the hypersonic planning combat unit is a unique weapon in its properties. Its interception is a very difficult task for any air and missile defense. High flight speed reduces the possible response time to a threat, and also complicates or eliminates the interception of an anti-aircraft missile.

It is easy to calculate that the TBG product at speed M = 5 is in theory capable of flying to a maximum range in less than 10 minutes. The loss of speed when planning a flight will slightly increase this time. Thus, to combat such weapons, an air defense system is required that can detect a threat at the maximum possible range and then intercept a target moving along an unpredictable trajectory with hypersonic speed. Probably the most convenient way to deal with such a threat is to intercept carrier aircraft, which also has its own difficulties.

How Russia and China will respond to the potential threat in the form of Tactical Boost Glide from DARPA and Raytheon is unclear. In our country, the development of promising air defense missile systems and missile defense systems, which are expected to differ from their predecessors with enhanced technical and combat characteristics, is underway. It cannot be ruled out that, for example, in the C-500 project, the possibilities for combating hypersonic aerodynamic objectives were initially laid.

The United States is not the first year to conduct research in the field of hypersonic technology, as well as build and test new types of prototypes. Another program of this kind has recently reached the signing of a contract with a contractor. Now the company "Reyteon" to develop the proposed ideas and bring them to the stage of technical design. Then, one should expect her to build and test TBG prototypes. In the case of obtaining the desired results, the product is adapted for use in the armed forces.

The recent news about the appearance of the next agreement between DARPA and Raytheon, as well as the expected consequences of this event, are a serious signal for other countries whose relations with the United States are far from ideal. Russia and China, which the United States regards as competitors and potential adversaries, should take into account the latest news and take measures to protect their interests.