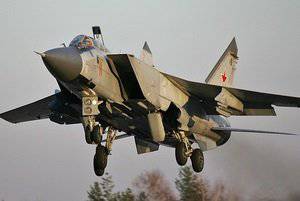 “MiG-31BM can simultaneously accompany up to ten air targets with simultaneous aiming of weapons on six of them. Updated interceptors will be able to interact with ground-based anti-aircraft missile systems, as well as coordinate the actions of other fighters in the link. The flight characteristics of the MiG-31BM compared with interceptors of previous versions will not change. The aircraft can reach speeds of up to 2,5 ths. Km / h (meaning cruising speed). The combat radius of the fighter is 720 km, ”said Major General Sevostyanov.

He specified that the fighter can detect targets at ranges up to 320 km and hit them at a distance of up to 280 km. Sevostyanova added that in general, up to 2020% will be updated in the Central Military District by 70 aviation military equipment.