March 5 2019
198
On February 20, in the next message to the Federal Assembly, Russian President Vladimir Putin again spoke about promising domestic developments in the field of armaments. Along with other products, the promising anti-ship Zircon missile was mentioned. The head of state did not disclose all the data on this product, but the announced information was enough to launch numerous discussions and disputes. Your opinion about Russian weapons voiced by specialists, politicians and the media.

The existence of a new anti-ship missile with special characteristics called "Zircon" became known several years ago. Since then, officials and anonymous media sources have managed to reveal some of the details of the project, although the development as a whole has remained secret. 20 February in the framework of the presidential address to the Federal Assembly sounded new official data on the "Zircon". 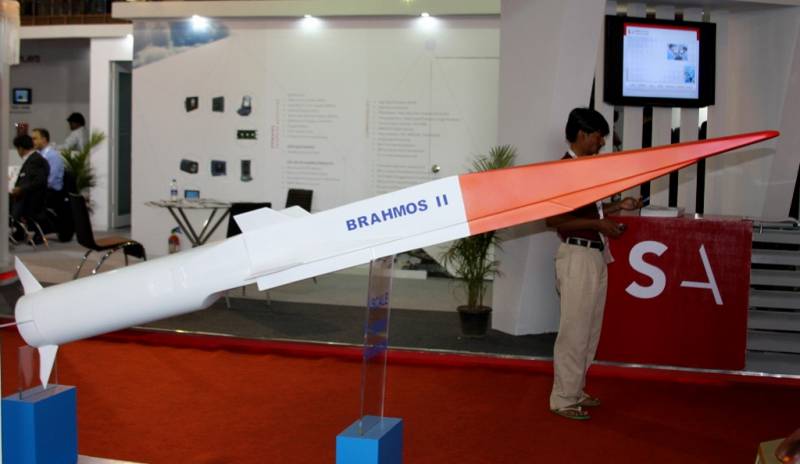 Model of the BrahMos II rocket, in the past associated with "Zircon"

Vladimir Putin said that work on the new anti-ship missile project is currently ongoing, the expected success has been achieved, and the weapon will be ready in the planned time. The Zircon project provides for the creation of a rocket with a flight speed of about M = 9 and a range of more than 1000 km. Carriers of such a missile will be surface ships and submarines equipped with Caliber complexes. The use of standardized launchers will reduce the cost of introducing new weapons. The Zircon product will be able to attack both surface and coastal targets.

The president did not disclose any other information about Zircon. However, in the context of all promising weapons, he outlined goals and objectives. Thus, Russia reserves the right to develop and deploy new types of weapons for their protection. The targets of such weapons should be both the areas and objects from which the immediate threat emanates, as well as the “decision centers” on the use of dangerous weapons for us.

For several days after the speech of V. Putin, US officials did not comment on the new information on advanced weapons. At the same time, it was Washington’s reaction that was of particular interest, since it was disagreements with it that force Moscow to create new weapons to destroy “decision-making centers” and other dangerous objects.

The first comment about "Zircon" appeared only on February 24. CNN has interviewed US Secretary of State Michael Pompeo, and one of the questions was about new Russian weapons. The US foreign minister called the statements about new missiles and their deployment against existing targets “empty threats.” He also believes that talking about new developments is intended to cover a key call. Finally, the state secretary did not forget to mention Russian “violations of the Treaty on the Elimination of Medium and Shorter Missiles”.

US media reacted to news About "Zircon" in different ways and in accordance with its focus. The tabloids shouted about the new threat, while more serious publications tried to figure out the essence of the problem. The statements of M. Pompeo changed the tone of new publications. Now the new Russian anti-ship missile is most often viewed as a real challenge to American security, which, however, can be overestimated.

Missile strike "News of the week"

24 February, the theme of Zircon rockets was raised in the program "News of the Week" on the Russia 1 channel. The host of the program, Dmitry Kiselev, in his well-known manner spoke about the new rocket and the possible principles for its use against dangerous objects - those decision-making centers of a potential enemy. The information expressed, manner of presentation and reputation of the program did their job, and the plot attracted the attention of both domestic and foreign viewers.

The host of "Vesti Week" proposed to consider the following scenario for the use of weapons. Ships and submarines with Zircon missiles must be located 400 km from the western and eastern coasts of the United States - outside the exclusive sea zone. From such positions, the fleet must strike at key targets. Each submarine is said to have 40 Zircon missiles on board. 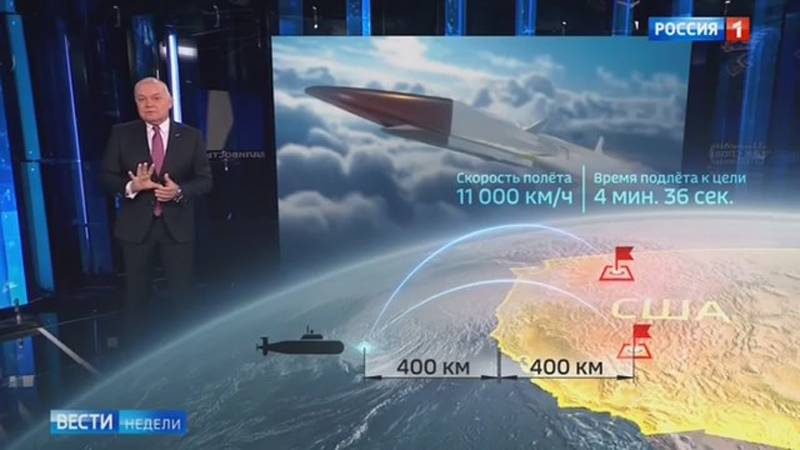 From the Atlantic submarines and ships will be able to fire at the Pentagon, the control center at Camp David, as well as objects in Fort Ritchie. From the Pacific, it is proposed to attack the control point of the nuclear forces of Jim Creek and the control of the strategic offensive forces of McClellan.

D. Kiselev calculated that the distances from the launch point to the designated targets do not exceed 800 km. With a flight speed of 11 thousand km / h, the flight time will not exceed 5 minutes. The potential of such a blow is obvious.

The foreign media outlets quickly responded to the plot of “News of the Week”. Some publications suggested preparing for the war and the catastrophic consequences of the missile strike in one way or another, while others supported the fresh statements of M. Pompeo and began to call for calm.

Of great interest is the reaction of the publication of the New York Post. It studied the list of targets “assigned” by the Russian television program and published the results of such a test. It turned out that the McClellan naval base and the training center at Fort Ritchie were closed a few years ago, and in Jim Creek there is not a command post, but a communications facility. Thus, only the Pentagon and the Camp David facilities remained real and relevant targets.

February 25 story, "Vesti of the Week" commented on the press secretary of the President of Russia Dmitry Peskov. He pointed out that the country's leadership does not interfere in the editorial policy of television channels, including state ones. Questions about the content of television stories, he recommended to address directly to the channels. D. Peskov also reminded that in his recent message, V. Putin spoke only about the deployment of weapons against potentially dangerous objects. Specific geographical locations were not called.

The other day in the domestic press widely quoted a new article by the German edition of Stern. 1 March, it published material on the Zircon rocket. In his title “Putins Zirkon-Rakete - schneller und tödlicher als vom Westen erwartet” (“Putin’s Zircon” - faster and more deadly than they thought in the West ”) reflected certain concerns regarding the capabilities of the new Russian weapons.

Considering the available information about the Zircon rocket, Stern notes that the recently announced flight performance of this product is consistent with data previously published in the Russian media. At the same time, they exceed the estimates of foreign experts. Thus, the German author refers to estimates of speeds up to 6 thousand km / h and a range of up to 500 km. 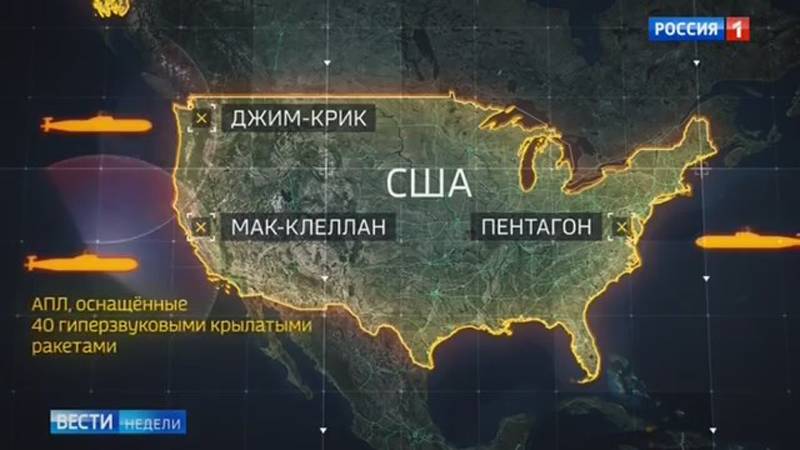 From the new information about the speed and range Stern makes obvious conclusions. It is noted that the interception of a rocket with a speed of 11 thousand km / h with the help of non-nuclear means of air defense is impossible. High speed reduces available reaction time: in just 3 minutes, a rocket at maximum speed can travel 600 km. Only combat lasers and electronic defense systems can effectively fight such attack weapons.

However, in the article Stern noted the difficulty of creating hypersonic missiles. It is required not only to ensure a high flight speed, but also to create a sufficiently robust design that is resistant to temperature loads when flying inside a plasma cloud. Maneuvering at high speeds is another difficulty.

According to V. Putin, Zircon missiles will be installed on ships and submarines using existing launchers from the Caliber complex. At the same time, the author of Stern believes that after the expected termination of the INF Treaty, one can expect the appearance of a ground version of hypersonic weapons. In addition, referring to the Russian press, the German publication writes about the possible development of a version of Zircon for use in combat aviation. Such a rocket will complement the already known products "Dagger". The use of a carrier aircraft with a certain combat radius will increase the area of ​​responsibility of missiles.

Stern also recalled the assessments of Tim Ripley, columnist for Jane's Defense Weekly, made in 2016. He noted that the high speed of the new missile reduces the time for the enemy’s air defense response. This will allow Zircons to unexpectedly attack a helpless opponent and inflict heavy damage on him. T. Ripley suggested that within the framework of the Zircon project not only an anti-ship missile could be created, but also weapons for attacking land targets. According to him, the United States should also work on such weapons. If this is not done, then Western countries may lag behind Russia and China.

Reaction to the news

In general, the statements of Vladimir Putin about the continuation of work on a promising hypersonic rocket did not go unnoticed. The reaction to this news was different, including diametrically opposite. At the same time, it should be noted that officials and the mass media commented on new messages taking into account their position and political moments.

Meanwhile, ignoring the statements of foreign persons and publications in the foreign press, the Russian industry continues to work on the Zircon project. According to the latest official reports, the project is on schedule and will be completed as scheduled. However, the military department and the head of state have not yet specified them. According to the news of the past years, experienced Zircon missiles have long enough time to go to the test, and therefore we can assume that the adoption of such a product is not far off. And this means that in the near future we are waiting for a new shaft of articles, opinions, discussions and loud statements.