Fragmentation beam for a tank of the XXI century 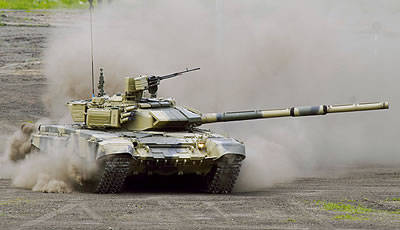 Anti-tank shells of tank guns (cumulative and sub-caliber) have undergone a period of rapid development and continue to be continuously improved. At the same time, the only type of tank shells capable of fighting tank-dangerous manpower and helicopters - the high-explosive fragmentation projectile stopped its development at the level of the 30-s of the last century. Today, such ammunition is an 125-mm 30F26 projectile with a B-429 fuse. Its low efficiency when shooting at single targets is well known and does not exceed on average 0,2. The main reason is the disagreement of the scattering density of the points of falling of the shells and the coordinate law of hitting the target. Due to the flatness of the trajectory, the ellipse of dispersion at a distance of 2000 m has a ratio of large 50: 1 axes, while at the same time the bulk of the fragments expand in the direction perpendicular to the trajectory. The relatively low filling ratio (30), low fragmentation properties of 26X0,14 chromium steel, which has a significant “saber formation” during crushing, as well as the practical exclusion of the possibility of shooting with the cap removed, i.e., reduce the effectiveness of 45F1. with the installation of the fuse for instant (fragmentation) action.


The low efficiency of tank shells with shock detonation has long been recognized abroad. Currently, Western countries are intensively searching for a promising anti-personnel anti-helicopter tank shell with a large depth of destruction. He is called a self-defense shell. tank, a tank survival shell, and even a "counterguerrilla" shell. Oddly enough, a promising scheme is considered to have centuries-old history buckshot. The United States Abrams tank was equipped with an 2004-mm XM120 projectile in 1028. The projectile contains 1100 spherical bullets made from a tungsten-based alloy, and at a distance of up to 500 m, it defeats more than 50% of the advancing infantry unit with one shot.

Received a number of patents for tank shrapnel shells.

A major event in recent years has been the development by the Israeli company IMI of an APAM tank cassette with a trajectory rupture of fragmentation combat elements. The original APAM projectile was developed for the 105-mm gun of the Merkava tank, protected by the European patent EP 0961098-2 and is mass-produced. The appearance on the market of this projectile was accompanied by a large advertising campaign. In the company's prospectus, the APAM projectile was characterized as “revolutionary”; it was indicated that it would provide the ultimate solution to the problem of protecting the tank from tank-dangerous targets. Recently, information has appeared on the development of an APAM XM329 shot for an 120-mm smoothbore tank gun. 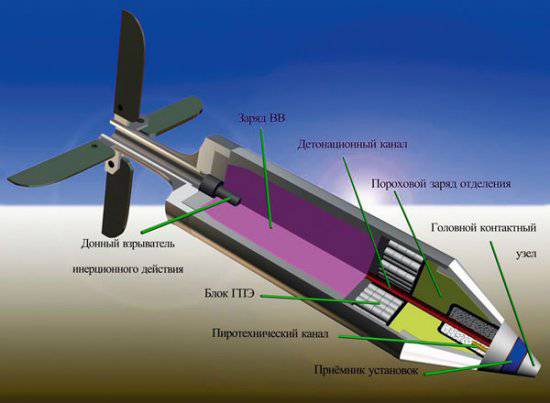 The so-called kinetic beam shells are being intensively developed. In foreign literature, they are referred to as KETF (kinetic energy time fuze - kinetic energy with a temporary fuse). These shells are currently predominantly manufactured for small-caliber installations (35-mm projectile AHEAD of the Swiss company "Oerlikon", 30-mm projectile for the new Mauser MK30-2 "Mauser" new German BMP "Puma"). The use of such projectiles that do not contain explosives for tank guns is a very controversial, but constantly debated issue.

From the analysis of the patent literature, we can conclude that the most promising tank projectile of self-defense is a fragmentation-beam projectile, which, along with a circular field, creates a field of shell fragments. The idea of ​​this projectile was put forward in MSTU. Bauman (then MSTU) in 1972, and the first patent was received by MSTU in 1994. Later, MSTU received 35 patents and various design schemes of fragmentation-beam ammunition of various classes. The projectile and its application issues were widely reported in specialized media. The model of the projectile was shown to the Minister of Defense, Marshal I. Sergeev, at an exhibition at MSTU in January, 1999. In foreign literature, the projectile was called the “Bauman charge”. In addition to MSTU, patents on the projectile were also obtained by 4 organizations.

Developed by one of the firms 125-mm tank fragmentation-beam (fragmentation shrapnel) projectile 30F54 with the fuse 3ВМ18 (Research Institute "Poisk"), was nominally adopted by the T-90С tank. Shooting was to be carried out using the “Ainet” trajectory blast system. However, in the mass production of the projectile and the fuse is not received. In the course of further calculations, it turned out that the Ainet system, neither in accuracy nor in speed of action, provides modern requirements.

Work on the projectile continues. Until now, the military has not determined whether a fragmentation beam shells should have a concrete action. If such a request is made, the head of the body should be made solid, and the fuse should be transferred to the bottom of the projectile. At the same time, the block of ready-made destructive elements (GGE) can be located both in the housing and outside the housing. The principle of operation of a trajectory fuse is not definitively defined - temporary, non-contact or command. There is no clarity on the question of how to enter a temporary installation before a shot: when flying out of the bore through induction rings, on flight using a laser or radio beam.

Great interest was aroused by reports on the development of the XM1069 Spotter fragmentation shells in the USA. During the fighting in both Iraqi campaigns, it became clear that the presence in the ammunition of the Abrams tank of four types of shells (МХNUMXА830 anti-helicopter / anti-personnel, М1 cumulative, М830 concrete-striking, М908 of a case-shot) creates serious difficulties for the crew in the protection of the fire and for the protection of the fire. in the tank manual).

The XM1069 universal projectile should replace all four of these projectiles. The projectile is made with a monolithic warhead, which provides a full concrete action. Input of installations in this temporary fuse is made on a cable in the cartridge. In the projectile, the concept of destruction of tank-dangerous manpower, which has been intensively developed lately, is realized by a dense beam of small GGEs with a mass less than 0,01. An outdoor lively unit of a given crushing is produced by the method of sequential deposition of a laser or laser electrode on a casing surface. electron beam. Adhesion of solidified droplets to each other is ensured by the interaction of semi-liquid outer layers of droplets.

The shell of the projectile is made of high-grade steel.

Along with the caliber version, the ХМ1096 also developed a subcaliber with a muzzle velocity of 1496 m / s.

There were reports about the start of production in Germany of a DM11 tank anti-personnel projectile. The layout of the unitary cartridge is the same as in ХМ1069 (bottom fuse, input of commands via the sleeve cable). The section of the head part in the illustrations is missing, however, it can be assumed that the projectile is fragmentation-beam.

Currently, the development of the Russian projectile is carried out by two organizations. Due to difficulties with financing, the work is slow and with long interruptions. Abroad projectile is not patented. There are serious concerns that, according to the assessment of the magazine Intellectual Property, one of the brightest ideas of our time in the field of armaments, the fragmentation-beam projectile may be lost for Russia as a large intellectual property object. This can not be allowed.

We are in Yandex Zen
The right shell for the right goal.
Soviet cumulative anti-tank ammunition during the war
2 comments
Information
Dear reader, to leave comments on the publication, you must to register.