February 27 2019
28
At the recent IDEX-2019 exhibition in the United Arab Emirates, for the first time, several samples of various types of military equipment were shown, including advanced unmanned vehicles. An interesting development in this area was demonstrated by the European companies MBDA and Milrem Robotics. Based on existing and well-known components, they created an anti-tank robotic complex / unmanned ground vehicle. It is alleged that this is the first in the world RTK / BNA, created specifically to combat enemy armored vehicles.


The joint work of the two European organizations was announced last year, during the Eurosatory-2018 exhibition. At this event, the European company MBDA and the Estonian Milrem Robotics spoke about their plans to create a new project of unmanned vehicles. The companies planned to combine existing developments in a new project, which should have produced interesting results. It was last year that the new development was named the first of its kind. 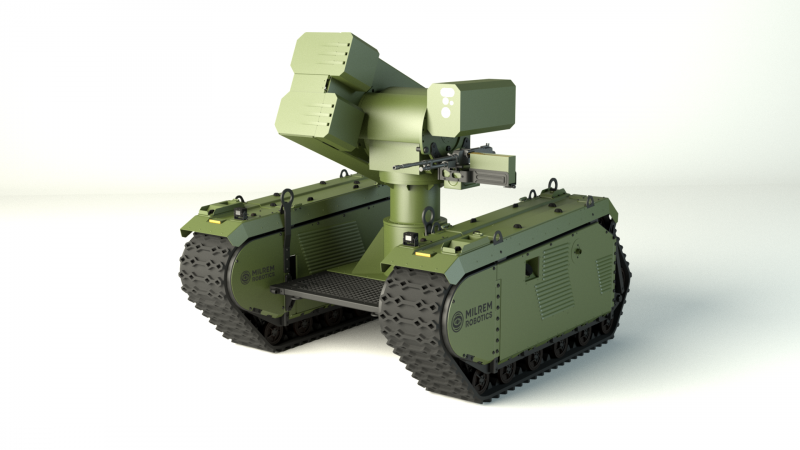 The appearance of the robotic complex, published last year

A joint project has no name yet. In official materials, he still carries the simplest name of Anti-Tank UGV - “Anti-Tank BNA”. Perhaps your own designation will appear later.

The project is based on a fairly simple idea. Estonian designers offered their multi-purpose unmanned tracked chassis THeMIS, capable of carrying various weapons or systems. The new project on this machine is proposed to mount the IMPACT combat module from MBDA. By connecting the two finished products creates a full-fledged remotely controlled combat vehicle designed to combat armored vehicles.

The mobility of the new BNA / RTK is provided by the THeMIS multi-purpose tracked chassis (Tracked Hybrid Modular Infantry System - “Tracked Hybrid Modular Infantry System”). This product was originally developed as a self-propelled platform with a remote control capable of carrying various payloads. In the case of the last joint project, a combat module with rocket-machine guns is used as a load.

The THeMIS product has a curious architecture. It consists of two lateral bodies with elements of a running gear and the central platform. It is noteworthy that all the main components and assemblies are located in the side housings and most of them are located inside the tracks. The load platform has no internal volumes. This layout simplifies the installation of a payload, including military equipment. 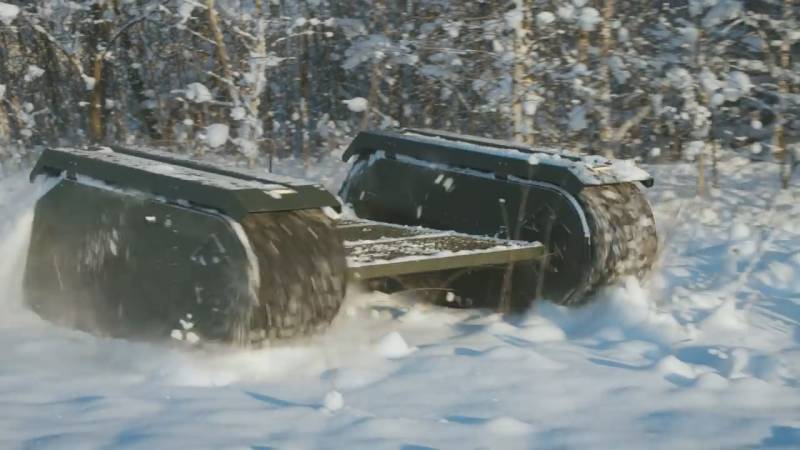 The THeMIS chassis has a hybrid diesel-electric powerplant. Inside the hulls are traction motors that are responsible for the rewinding of the tracks. The right chassis housing holds a compact diesel generator of unnamed power. In the left half of the product is the battery pack. Depending on the current need, the elements of such a power plant can be used together or separately. So, when using diesel and batteries, the chassis continuous operation time reaches 10 h. If only batteries are used, this parameter is reduced to 1-1,5 h.

The chassis of each unit has six small road wheels with a soft suspension, as well as larger guide and drive wheels. Rubber track covers main body. Above it is fixed a small nadgusenichnaya shelf with part of the instruments and equipment.

The Milrem THeMIS chassis without a payload has a length of 2,4 m with a width of 2 m and a height of 1,11 m. The car accelerates to 60 km / h. The range and range depend on various parameters.

On the central platform of the chassis can be installed various devices, devices and weapons. Earlier, the exhibitions demonstrated a robotic complex with machine-gun armament and an optical-electronic unit. Also on the basis of the existing chassis, you can build reconnaissance, transport and other VNA. The promotional materials from the developer organization feature 12 variants of military equipment based on THeMIS.

In a joint project of Anti-Tank UGV, the MBDA IMPACT combat module (Integrated MMP Precision Attack Combat Turret - “Combat turret for accurate attacks with integrated MMP) was used as a payload. This product can be used on different carriers, and the Estonian unmanned chassis is playing the role in this project. 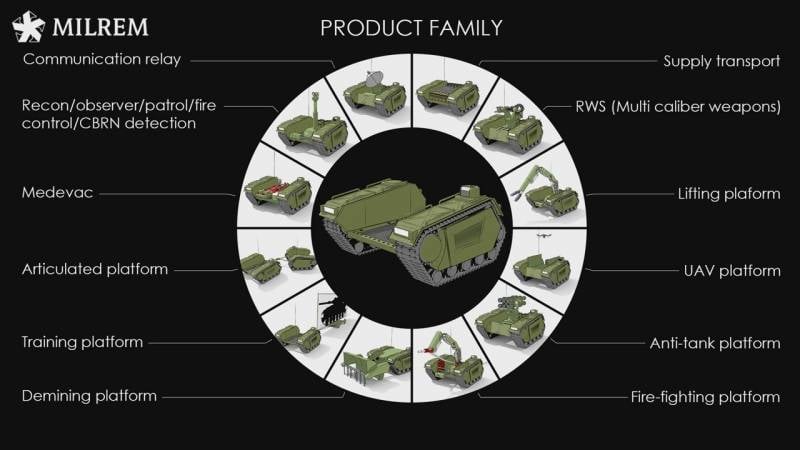 Variants of technology on the chassis THeMIS

Directly on the central platform of the chassis, a rotary support device of the combat module was installed. Due to the correct installation of the aggregates, the main devices of the IMPACT module are higher than the tracks and can be guided in any direction. The central unit of the module is placed on the turntable, on the sides of which the weapons and the necessary equipment are mounted.

On the starboard side, the installation of a light armored hull, containing two transport-launch containers with missiles, is envisaged. On the left there is a protected block of opto-electronic equipment for searching targets and targeting, as well as a machine gun installation. Rockets and machine guns can be induced in a vertical plane, but use separate drives for this. Optics during operation does not move.

The main armament of the IMPACT module is guided anti-tank missiles MBDA MMP (Missile Moyenne Portée - "Medium Range Missile"). Two TPK with such missiles are mounted on the side launcher of the module for firing into the forward hemisphere. The rocket container is 1,3 m long and weighs 15 kg. For control of rockets, standard optical devices and other devices mounted inside the module are used.

The MMP rocket is built on the basis of a cylindrical body with a diameter of 140 mm in a normal aerodynamic configuration with two sets of folding X-shaped planes. The head of the body is given under the infrared / television homing head and autopilot. In the center there is a tandem cumulative warhead and a dual-mode solid propellant engine. The tail compartment is given under the control equipment and the coil with optical fiber for connection with the launcher. The MMP missile is capable of striking enemy armored objects at distances up to 4 km and penetrating more than 1000 mm of homogeneous armor behind dynamic defense. 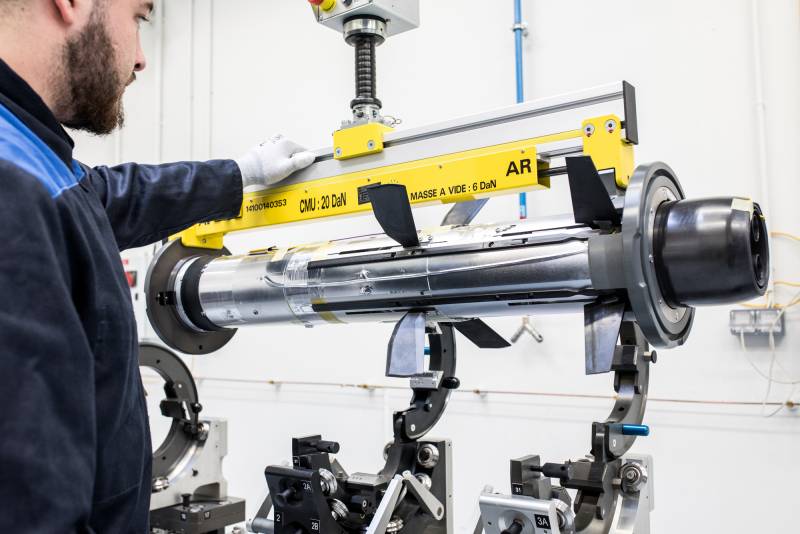 Guidance is carried out using an optical homing system capable of operating in the “started-forgot” mode. Having a connection with the launcher allows you to capture the target not only before launch, but also during the flight. In the latter case, the missile is redirected after exiting the TPC. The operator of the complex can also choose a flight profile: low-altitude with an attack of the visible projection of the target or a high trajectory with a blow to the roof.

Having your own set of optics on the launcher and the rocket increases the effectiveness of anti-tank systems. The use of the cable line, in turn, eliminates the loss of communication due to the use of electronic warfare by the enemy. The operator can make adjustments until the missile hits the target, helping the automation.

As a means of self-defense, the MBDA IMPACT combat module carries a rifle caliber machine gun. It is curious that the combat module for the recent exhibition was equipped with a PKT machine gun. Perhaps the type of small weapons for the new RTC can be determined by the customer.

First in its class?

To date, MBDA and Milrem Robotics have built at least one prototype of a promising anti-tank unmanned ground vehicle. This prototype was shown at a recent exhibition, and now it must pass the necessary tests. In the near future, orders for serial equipment are expected. 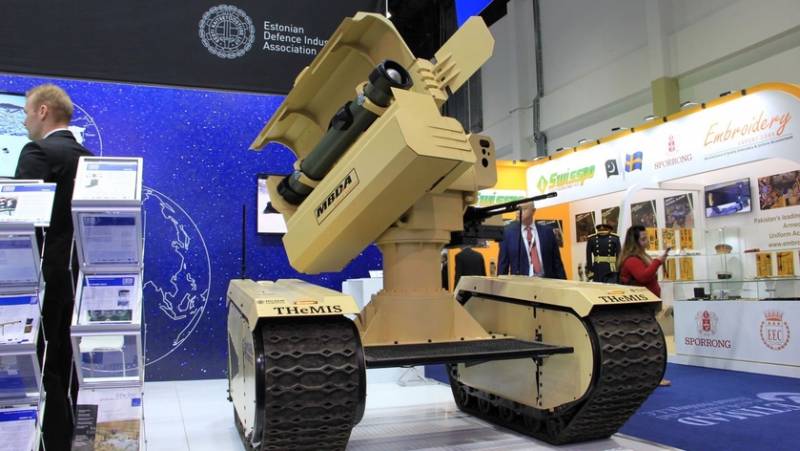 A full-scale sample of anti-tank RTK at the IDEX-2019 exhibition. Missile armor cover is open

It should be noted that the main components of the anti-tank RTK / BNA have already passed the necessary tests. Moreover, the anti-tank missile system MMP has recently confirmed its characteristics and was adopted by the French. Now it is necessary to carry out the full volume of tests of the whole complex in finished form and check the interaction of its individual components. According to the results of such tests, an unmanned vehicle can be offered to customers.

Product MBDA / Milrem Anti-Tank UGV is called the first in the world BNA, designed specifically to combat armored vehicles. Probably, such a definition is offered exclusively for promotional purposes and does not quite reflect the real state of affairs. To date, a large number of RTKs with anti-tank rocket or grenade launchers have been created in different countries. However, most of these samples of missiles or grenade launchers are auxiliary weapons. New European development, in turn, carries the MMP as the main weapon.

In the presented form, the new VNA is of particular interest both from a technical and commercial point of view. The project is based on a proposal to use several already known and tested samples, which together form the original combat vehicle. The result of such a combination of components can not fail to attract attention. Nevertheless, we should not forget that such projects are developing not only MBDA and Milrem Robotics. Many enterprises are now engaged in the creation of multi-purpose modular RTK, and in this respect Anti-Tank UGV is just another development of its class.

The proposed model combines a modern anti-tank missile system and a multi-purpose chassis with high performance, provided by a hybrid power plant. All this can be a good competitive advantage in the fight for contracts. At the same time, a potential customer can purchase not only ready-made anti-tank BNA / RTK, but also their individual components. IMPACT combat modules and the THeMIS chassis can be used not only together. Due to this, the customer can get benefits associated with the unifications of weapons and equipment. 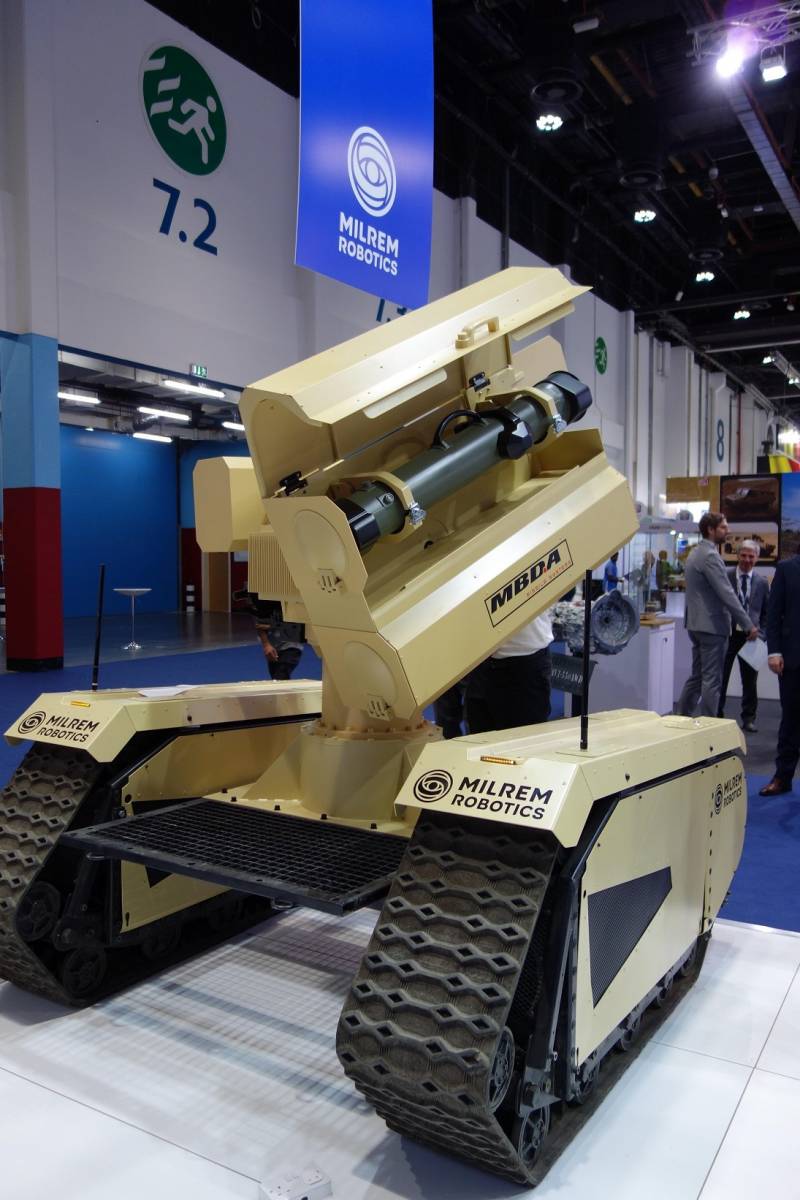 However, it should be borne in mind that the new development from MBDA and Milrem Robotics will have to face tough competition. The market of unmanned ground-based vehicles for various purposes is actively developing, and new participants and samples constantly appear on it. Any new development applying for contracts has to prove its potential. “First-of-its-kind” statements are not a real argument.

It is expected that the further fate of the original anti-tank RTK from European manufacturers will be known soon. Last year, the basic information on this project was presented, and potential buyers were able to evaluate the novelty before its appearance. At the recent exhibition IDEX-2019 for the first time showed a full-scale sample of the complex, and future customers were able to re-evaluate the project, as well as draw new conclusions.

If the new RTK / BNA could interest the military from one country or another - in the near future there may be news about negotiations and preparation for signing a contract. However, a negative scenario is also possible: the novelty will continue to be taken to exhibitions, but it will not be able to take its place in the market. While it is impossible to say with certainty which of the scenarios is more likely.

At the moment, only one thing is clear. Two European companies with serious experience in their fields combined several existing developments and created a promising robotic complex with a special specialization. How the project will continue to develop, and whether it will be able to become the subject of new contracts, time will tell.