February 27 2019
29
Since last year, American enterprises have been engaged in serial modernization of existing main combat tanks Abrams by project M1A2C. A few days ago, the first photo of a modernized tank with a full set of new equipment for various purposes appeared in the public domain. This model of the armored vehicle is noticeably different from the prototypes shown earlier. Most likely, the other modernized tanks will have the same appearance.


Recall, the M1A2C project, until last year known as M1A2 SEP v.3, provides for a significant upgrade of M1A2 tanks (including SEP v.2), aimed at increasing all the main parameters. Enhancement of protection due to new components, replacement of a part of electronic equipment, modernization of the power plant, etc. are proposed. Also in the course of upgrading should be carried out repair equipment, allowing to extend the service life. 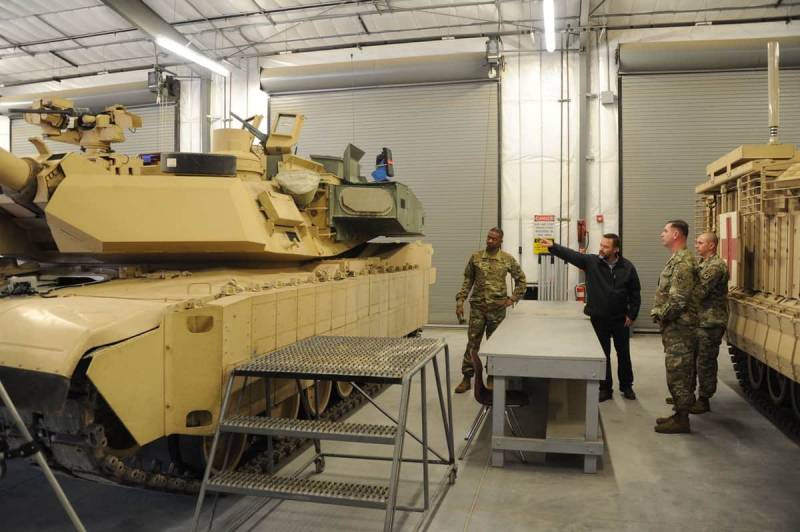 The first prototype of the tank, then still designated as M1A2 SEP v.3, was first shown to specialists and the public in the autumn of 2016. In the future, several prototypes were tested, after which contracts appeared for a massive update of equipment. To date, a number of tanks have been upgraded, and some have fallen into the camera lens.

The first known photograph of the MBT Abrams in the new configuration was made at the Hume test site, one of the main sites for testing land combat equipment. The tank was not fully captured, but this did not prevent identifying it in the right way. Soon, specialized resources turned their attention to an updated Leonardo DRS advertising brochure, in which very interesting materials were present.

The Italian organization is involved in the modernization of American tanks as an installer of active protection complexes. Not so long ago, she updated the promotional materials for KAZ of the Trophy family and added new photos to them. The reader was shown a modernized tank M1A2C, equipped with a number of additional exterior-mounted products. Technique from photos from the "Leonardo" was no different from a tank from the land of Hume.

The tanks with fresh photos have noticeable differences from the M1A2C / M1A2 SEP v.3 prototypes that were previously demonstrated. Such differences are primarily determined by the presence of additional protection systems of various kinds. Exhibition samples did not have such equipment. This means that after the first demonstrations of the technology, the modernization project was supplemented, and with a serial update the tanks will receive more new devices.

Modernization of the tank provides for strengthening the existing protection with the help of several new components of various kinds. On the frontal parts of the tower installed new overhead booking elements. The composition of these modules is unknown. Probably in the form of flat angular details made a combined booking. According to various estimates, which appeared due to the lack of official information, the use of invoice frontal armor brings the equivalent frontal defense of the tower to 800-900 mm.

Frontal hull booking is complemented by a bill of delivery on the bottom sheet. Also previously reported on the strengthening of the bottom to increase the resistance to mines. Measures are being taken to enhance the protection of the onboard projection. Almost along the entire length of the onboard screen are placed blocks of dynamic protection. They do not cover only small sections of the bead in the front and rear parts - at the level of the driving and steering wheels. The characteristics of the dynamic protection used are not specified, but it is obvious that its use has a very positive effect on the combat stability of the vehicle.

Over the past few years, the US Army has been working on the issue of mass equipment of modernized tanks with active defense complexes. Recently updated tanks M1A2C received such equipment that can speak about the successful completion of past work.

On the sides of the tower of the upgraded Abrams are placed two covers with elements of the KAZ Trophy-HV of the Israeli company Rafael. Leonardo DRS is responsible for the supply and installation of such equipment. The radar antennas of detection are located on the front and rear of the casing of the complex, and a hinged cover is provided above, under which the launcher for protective ammunition is located. KAZ is intended for the timely detection of flying anti-tank ammunition and their destruction before striking the protected tank. 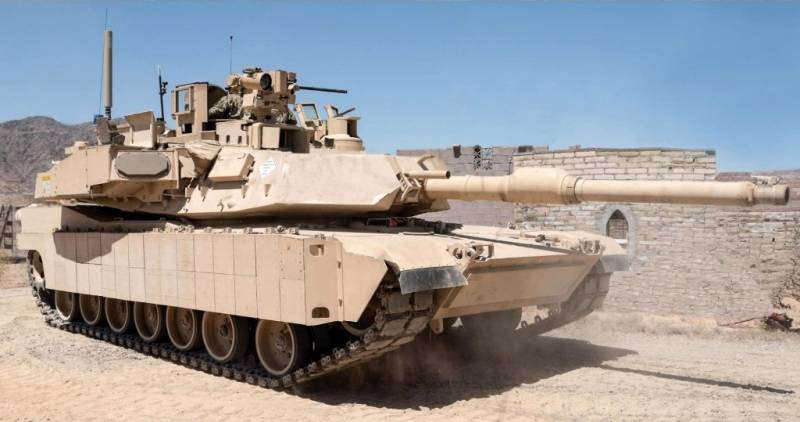 Another snapshot of the M1A2C tank. Photo by Leonardo DRS / leonardodrs.com

The Trophy-HV complex weighs 820 kg and occupies a volume of 0,69 cubic meters. The possibility of protection against attacks from all angles with the defeat of flying targets at a safe distance for the tank. It should be noted that the Israeli KAZ in the HV version can carry out interception only with the help of protective ammunition. Other modifications of the "Trophy" also include means of optical-electronic suppression.

Other changes in the design and composition of the onboard equipment are not visible from the outside. However, they are well known from the moment of publication of the first data about the project M1A2C / M1A2 SEP v.3. These improvements affect the power plant, control equipment and ammunition.

The M1A2C project provides for the use of an auxiliary power unit to power the on-board systems with the engine off. Unlike previous projects, this time the APU is placed inside the armored hull, next to the main engine, which dramatically increases its survivability. Conflicts of recent decades have shown that the initial external placement of the Ukrainian Armed Forces is a serious problem.

The opto-electronic sighting devices of the commander and the gunner are being upgraded. New sights are built on the basis of modern thermal imagers. Communications and control equipment is being replaced: new devices more effectively ensure the interaction of equipment and troops. For the first time, the Vehicle Health Management System is installed, designed to track the status of components and assemblies.

The main gun gets several new shells, including a fragmentation shot with a programmable fuse. Accordingly, the gun is equipped with a programmer to work with such devices. At the expense of new ammunition is proposed to increase the firepower of the tank, without resorting to the replacement of weapons.

Auxiliary weapons are being developed. The commanding machine gun is transferred from an open installation to a remotely controlled combat module CROWS RWS. The second machine gun remains on the loader's hatch, and for its use the tank driver needs to lean out of the hatch. Safety loader is provided with a double shield with bulletproof glass.

According to known data, as a result of modernization and installation of new units, the M1A2C tank is noticeably heavier. Its combat weight increases to 66,8 t. It is not entirely clear whether additional security measures are taken into account in the form of overhead panels, KAZ and on-board screens with dynamic protection.

According to the results of the modernization of the project M1A2C tank "Abrams" should increase all the main characteristics, with the exception of mobility. New devices in the fire control system and modern ammunition should increase firepower and combat effectiveness. APU simplifies and reduces the cost of operation. Overhead booking elements and other protection systems increase combat survivability.

Experienced tanks with the SEP v.3 update package have been tested since 2015, and in 2016, such a machine was first shown at an open event. The tests were completed in 2017 year, they confirmed the potential of the proposed "internal" improvements. At the same time, checks were carried out on the Israeli-developed Trophy-HV active protection complex. This system has confirmed the main characteristics and is now used when modifying tanks. 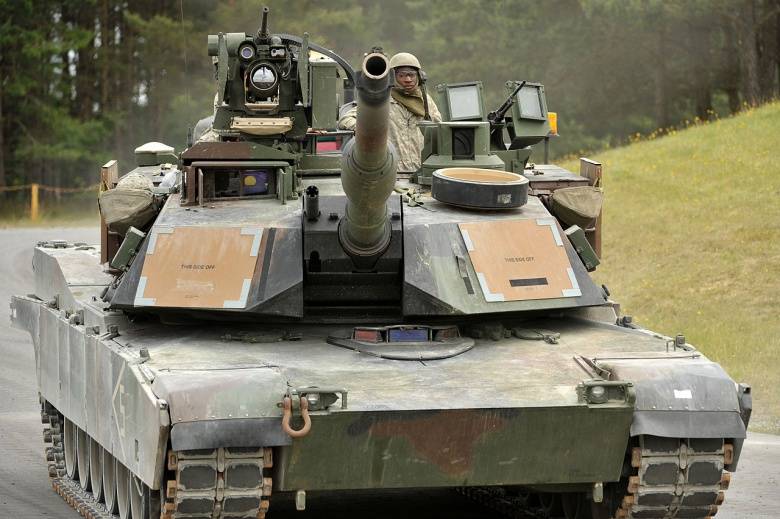 One of the pre-production tanks M1A2 SEP v.3. Photo US Army

The first pre-production batch of tanks M1A2 SEP v.3 / M1A2C was transferred to the US Army in October 2017 of the year. In addition, in the same year, the army ordered 45 tanks serial modernization; This contract cost her 270 million dollars - 6 million for upgrading one armored vehicle. The first serial M1A2C went to the troops in July last year. In the future, August, the army wants to get the last of the first batch of 45 machines. Engineering is engaged in updating the company General Dynamics Land Systems.

At the end of 2017, a framework contract with GDLS for rebuilding 435 tanks of the M1A2 model for a new project appeared. In July, 2018, the parties signed a firm agreement to supply a new batch of 100 tanks. A few weeks ago, the customer and the contractor agreed on the restructuring of another 174 armored vehicles, which should be completed before the 2021 year. Thus, there are already contracts to upgrade almost 320 tanks from combatant units.

The implementation of current orders will continue until the 2021 year, after which the next stage of the modernization of the armored vehicles can start. Already, defense industry enterprises are working on a new tank modernization project. Previously, this development was known as M1A2 SEP v.4, but since last year it has been called M1A2D. This project involves the use of developments in the previous versions of modernization, as well as the further development of fire control systems and communications equipment, the use of new projectiles, etc. Improved additional protection systems are expected.

According to known data, the prototype of the tank M1A2D may appear no earlier than 2020 of the year. It will take some time to test it, after which orders may be issued for serial re-equipment. Thus, the serial M1A2D will appear no earlier than 2021-22's. Probably, according to this project, the remaining machines of the M1A2 type, which did not have time to receive the “C” updates, will be upgraded.

In the meantime, GDLS, together with the customer, is busy with the program of upgrading existing tanks to the state of M1A2C. Such machines recently first hit the frame, and their image became public. Probably in the near future, such pictures or videos of modernized American tanks will become commonplace. The upgrade program for the new project is gaining momentum and yields the desired results. However, after a few years, the current project will replace the new one, providing for other changes in the design and composition of the equipment of tanks.