Norwegian media: Ukraine has become a hotbed of world neo-Nazism

February 27 2019
103
In Europe, they finally began to correctly understand and adequately assess the danger from the neo-Nazis of the Ukrainian militarized formations such as the Azov or Aidar battalions. According to the Norwegian edition of Fri Tanke, Ukrainian nationalists are skeptical not only about Russia, but also about other European states and nations. And Ukraine in the European Union is now rightly considered a hotbed and stronghold of neo-Nazism. 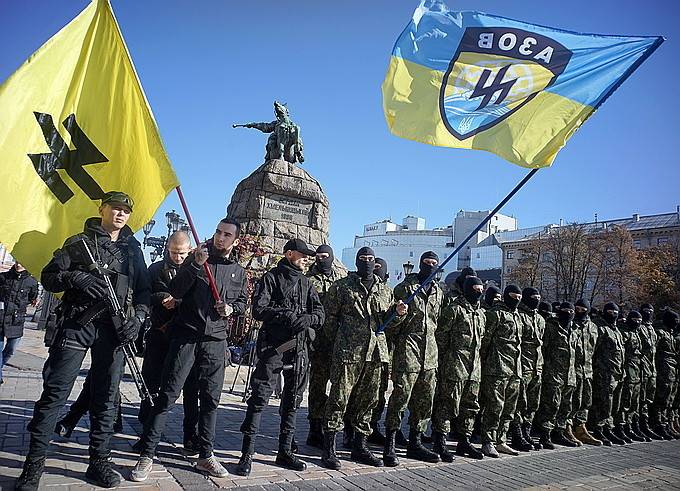 The nationalists of "Azov" hold the opinion that the countries of the Old World due to their rabid multiculturalism have lost their national identity. And the millions of refugees who flooded Europe during the migration crisis of recent years have made it an African-Middle Eastern colony. It is not surprising that the radical Ukrainians are frustrated by this situation in the European Union.

Europe actively began to show concern over aggressive Ukrainian nationalism after the recent events in Norway. It became known that one of the inhabitants of Bergen, Juakim Furuholm, recruited Western right-wing radicals to participate in a military conflict in eastern Ukraine. At first, recruited Europeans went to the Azov training base near Mariupol, and only then east to Square.

The backbone of Azov, in addition to the radicals from the EU, consists of Euromaidan activists and nationalist-minded football hooligans, popularly known as ultras. And the roots of the battalion go to the Social-Nationalist Assembly of Ukraine - an organization openly racist and anti-Semitic.

Nationalist paramilitary units of the Square were scandalously famous for the fact that there were many foreign neo-Nazi mercenaries in their ranks. In "Azov" served as a coordinator for the Swede Mikael Schillt, terry neo-Nazi and racist. Also in the ranks of the battalion were soldiers of fortune from other European countries: the French, Germans, Italians. Some of them are simple adventurers, but the overwhelming majority were ideological extremists who dreamed of a full-scale fascist coup in Europe.

The discovered Norwegian recruiter was not the only external contact of the neo-Nazis of “Azov”. As it turned out recently, over the years the battalion has established relations with many right-wing organizations in the USA and the EU. Such cooperation of Ukrainian nationalists became interested even in the FBI. According to their data, the US "white nationalists" were trained at the Mariupol military base of "Azov". And the secretary of the aforementioned military unit, Elena Semenyaka, visited the countries of Western Europe many times and contacted the extreme right there.

Among the American partners of Azov, you can find organizations such as the Atomvaffen Division, the Richard Rando movement “We will be higher”. Both "offices" profess racial intolerance and violence for the sake of violence. Many members of these extremist groups have been convicted of murder and other crimes. And the Norwegian recruiter of the Ukrainian battalion, Juakim Furuholm, was part of the Norwegian radical formation “Vigrid” and idolized the Muslim mass murderer Anders Breivik.

Therefore, in Europe, they rightly consider Ukraine a stronghold and breeding ground for neo-Nazism. In Mariupol, on the basis of Azov, radicals from the EU undergo primary military training, and then they receive combat experience in the eastern regions of the Square. At the same time, Kiev does not struggle with manifestations of extreme nationalism. On the contrary, local neo-Nazis are supported at the highest level: Ukrainian President Petro Poroshenko and Interior Minister Arsen Avakov are patronizing Azov.