Will IM-SHORAD be able to put on Pantsir-С1 blades? While time plays in our favor

February 20 2019
14
Against the background of an unprecedented glut of theaters of military operations of the XNUMXst century with such promising aerospace attack weapons as operational tactical ballistic missiles, guided missiles, guided aerial bombs, tactical and strategic cruise missiles with reduced EPR, as well as inconspicuous unmanned reconnaissance and strike drills aviation complexes, customers (defense departments and armed forces of economically developed states) continue to put forward stricter requirements for the well-known concern-developers of modern highly mobile military defense systems, giving a new impetus to the "competitive battle" between the military-industrial complexes of regional and global superpowers. 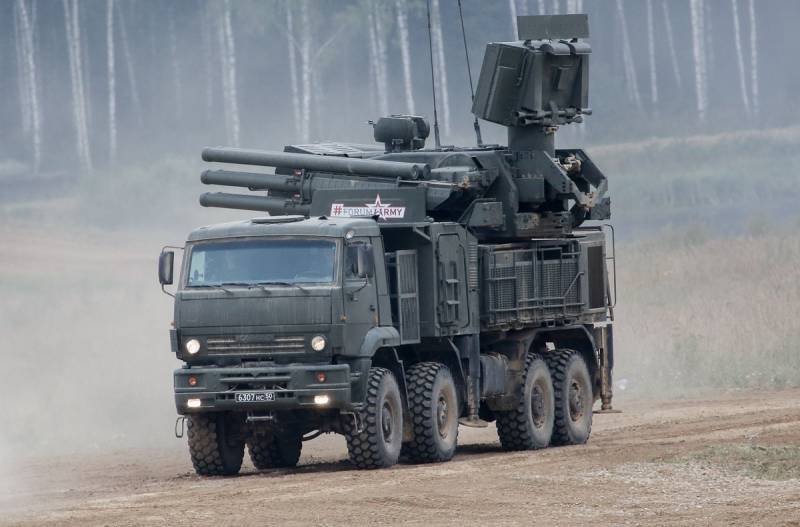 Features of meeting these requirements are no longer only in reducing the response time and expanding the target canal of self-propelled anti-aircraft and anti-aircraft missile and artillery systems, but also in equipping the latter with several targeting channels to achieve the highest noise immunity, as well as the ability to intercept enemy low-altitude air targets hiding behind the natural objects of the terrain (beyond the line of sight). The tactical surprise phenomenon, which (as applied to modern theaters) may involve the unexpected appearance of enemy mechanized units of reconnaissance and sentry vehicles with reduced infrared and airborne forces, also contributes to the expansion of the spectrum of requirements for the developers of troop anti-aircraft missiles. radar signatures equipped with anti-tank weapons with a range of 4 km and more. In this case, the need arises to endow self-propelled anti-aircraft missile systems with the additional possibility of firing at ground (surface) objects.

Against the background of the above trends, the fact that the US defense department is hastily preparing to conclude a contract with the Lockheed Martin and Fire Control unit for the supply of 144 short-range IM-SHORAD (Initial Maneuver-Short-Range Air Defense) air defense systems to the US Army ), which was announced in the first half of February 2019 by the Federal Bussiness Opportunities portal, citing military and diplomatic sources in the Pentagon. Some Russian military-analytical and news sources, including Military Parity, hastened to christen IM-SHORAD as "American" Shell "with the" Stingers ". But what are the true capabilities of the combat module placed on the Stryker-A1 chassis, and are they commensurate with the capabilities of the combat module of the Pantsir-C1 air defense system when intercepting air targets, as well as when hitting ground targets?

If you take a close look at the technology sketch demonstrating the latest version of the IM-SHORAD complex, announced by Federal Bussiness Opportunities and Defense News, you can pay attention to the presence of 4 decimeter multi-function RPS-42 pMHR radar overview of the front, rear and "side" hemispheres with an area in 360 degrees in the azimuthal plane (a similar configuration of the "continuous redevelopment" is embodied in the ship's MRLS "Polyment", AN / SPY-1D and APAR, which has a positive effect on the response time s and air defense system, ensuring its reduction). 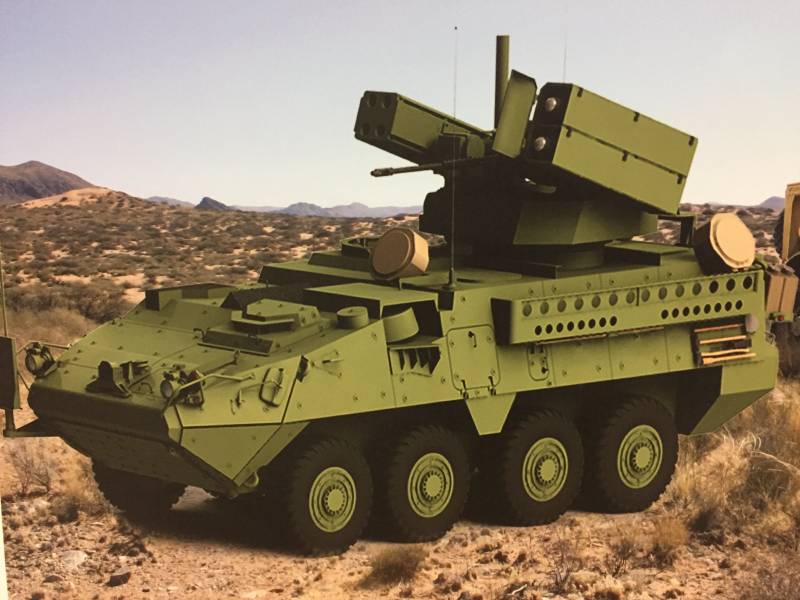 There is also the possibility of installing an 5 (vertically oriented) antenna module (currently not confirmed) being pulled out of a container integrated into the left part of the upper armor plate of the Stryker-A1 case. Its main purpose can be a full-fledged overview of the upper hemisphere, with overlapping of the 40-degree zone of the “dead funnel” formed by an insufficient elevation sector of the review (from -10 to + 70 degrees) of the four above-mentioned RPS-42 radars. Each 504 mm pHMR antenna module (developed by Israeli company RADA Electronic Industries) is represented by an AFAR based on gallium nitride microwave transistors providing higher energy modes with a fighter-type target detection range (EPR around 1 sq. M) of the order The 25 — 30 km, the “ultra-small-sized drone” 3,5 — 4 km, and the “artillery / mortar mine” —5 — 10 km (depending on the caliber). Armored vehicles (BMP, BTR, MBT) can be detected at a distance of 17 — 20 km.

On the sketches, as well as on the IM-SHORAD exhibition demonstrators, there is a multi-band turret optical-electronic sighting system, represented by a TV viewfinder, as well as a high-resolution infrared matrix photoreceiver, which are designed to detect and track air and ground objects in difficult interference environments (when pHMR radar minimized). As you can see, the total level of noise immunity of the IM-SHORAD radar and opto-electronic guidance systems from powerful noise, defensive, imitation response, and optical-electronic interference is almost no different from the indicators demonstrated by the 1PCXNNXX / 2PC1- radar tracking complexes The 2E “Helmet”, as well as the 1EC10-E optical-electronic reticle, mounted on the Pantsir-С1. However, at a high level of noise immunity, all the similarities between IM-SHORAD and "Shell-С1" ends.

While RPS-42 pHMR multifunction radars (or their higher energy versions RPS-72 eMHR and RPS-82 ieMHR) are capable of tracking aerial targets with flight speeds of the order of 1482 km / h (the data are shown on the developer’s official website - www .rada.com), the Pantsir-С1 radar equipment has a limitation of 3600 km / h! Consequently, IM-SHORAD (even without taking into account the use of FIM-92C / E missiles) has much more mediocre ability to intercept high-speed multi-purpose air-to-surface missiles, anti-radar missiles, single missiles and other means of air attack, moving at speeds more than 1,4M. Let's go to the "Stingers". The use of FIM-92C / E Block I "Stinger" as interceptor missiles exacerbates the situation with the low antimissile potential of the IM-SHORAD complex, because, despite the use of POST-RMP dual-band IR / UV homing heads with excellent target selection capabilities against the background infrared traps and background noise, the ability to "capture" targets with a minimum infrared signature (mortar mines, free-fall and guided bombs) is reduced to zero.

The possibility of intercepting anti-radar missiles and other 2-3-flywheel targets, whose radomes and planes possess certain infrared radiation in connection with aerodynamic heating, is also not ensured due to the heating of the own optical-transparent fairing of the GOS, as well as due to the speed limit of the target to be hit. in 1500 - 1700 km / h. Conclusion: the bundling of IM-SHORAD with FIM-92E anti-aircraft missiles will ensure the possibility of hitting only low-speed targets with a certain infrared signature due to the use of sustainer turbojet engines (tactical long-range missiles, strategic cruise missiles, and UAVs equipped with turbojet engines and having a speed not higher than 1,4M).

As for our ZRPK "Carapace-S1" their high-speed missiles 57E6 with high-security radio command guidance system (4680 km / h against 2500 km / h at FIM-92E) at the moment of interception purposes do not rely on highly specialized IR / UV-GOS “Sharpened” only for “capture” of warm-contrast targets, and for all ranges of operation of a television-optical viewfinder (long-wavelength IR range with a wavelength 8 — 14 μm, TV range using a CCD / CMOS sensor), as well as target tracking radar and guidance missiles 1PC2 / 1PC2-1E "Helmet", thanks to it happens the destruction of ASD, and even the MLRS rocket 9M22U type shells "Grad". Against this background, FIM-92E does not have a radio command guidance channel, due to which the possibility of targeting and correcting the trajectory according to data from the RPS-42 radar pHMR is absent; all bets are made exclusively on highly specialized IR / UV-GOS.

The indisputable advantage of the IM-SHORAD self-propelled air defense missile system can be considered as the ability to fire at ground targets at a distance of 7 - 15 km using anti-tank / multipurpose missiles of the AGM-114L "Hellfire-Longbow" families (equipped with ARGSN millimeter W-band), as well as more long-range JAGM (with dual-band GOS, represented by a similar millimeter W-band sensor and infrared photoreceiver). Shooting can be conducted both at targets that are in the line of sight (in this case, the television optical sight and radars RPS-42 located on the combat vehicle of the IM-SHORAD complex will be used as targets), as well as “behind the screen "Objects (this method provides for obtaining targeting to the network-centric data exchange terminals of the IM-SHORAD complex from third-party radar, radio and optical-electronic reconnaissance).

According to this criterion, a highly mobile shtatovskiy SAM (a more logical solution would be to rank this product as “multifunctional missile systems”) is significantly ahead of the Pantsir-С1. But you should not get upset here, since the Hellfire / JAGM family of missiles have a serious “genetic flaw”, which consists in an extremely low marching and flying speed in 1600 — 1300 km / h, which can be intercepted by the same “Pantsrey And Thors. From active protection complexes that can be installed on any type of armored vehicles (from BRDM to combat robotic complexes), these missiles are also not insured (especially since each IM-SHORAD in the latest version is equipped with only two armored TPK for AGM-114 / JAGM) . The IM-SHORAD modification, equipped with a transport-launch module with promising M-SHORAD Future Interceptor antimissiles, which successful field tests of which were announced back in December 2018, may pose a greater threat. Being a constructive analogue of the CUDA / SACM-T anti-missile missile designed to build the US tactical airborne tactical missile defense line from enemy air-to-air missiles, M-SHORAD "Future Intreceptor" received a unique moment-based gas-dynamic control system based on the 200 "belt" impulse engines located in the front part of the product case.

Such a constructive solution, together with the presence of ARGSN Ka-band, opens up for operators "Shoradov" horrendous hitherto to destroy super-maneuverable small-sized air targets using the kinetic method, which Pantsiri cannot do due to the radio command guidance system. In the same turn, the time spent on developing and integrating into the Pantsirey-C1 family of new missiles with an active radar guidance system, allowing not only to expand the target canal and accuracy of the complexes, but to ensure the destruction of targets outside the line of sight, from Tula Instrument Design Bureau "(Possibly with the help of the Agat Research Institute), is still there, because the coming arrival of M-SHORADs with Stingers in the American army already points to a certain" technological slip "with interceptors" Future Int eceptor ".