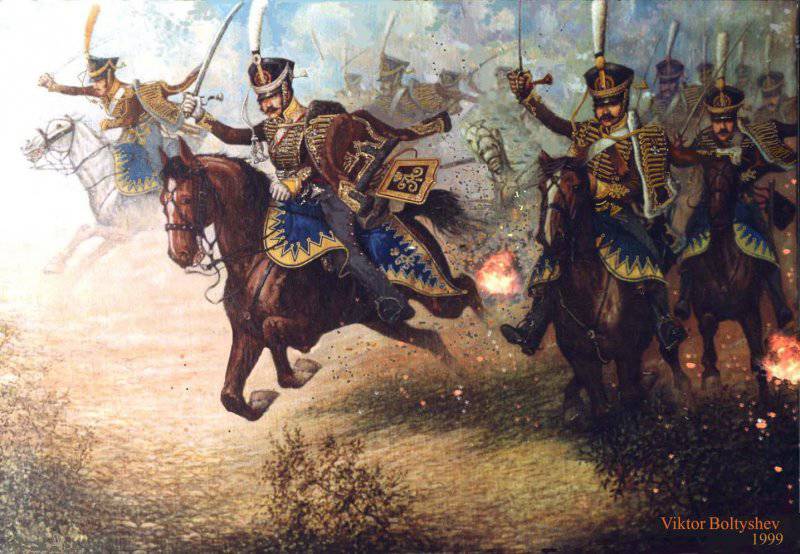 Boltyshev Viktor Nikolaevich. Davydov in the battle at Saltanovki. Xnumx

“Our mother is huge Russia! Will not everything, whether it be found alive or inanimate, on the broad path of a hurricane ... our army, the first in the world in its courage, discipline and structure, be demolished by ashes from the face of the earth?
Even Russia did not rise in its gigantic growth, and woe to its enemies, if it ever rises! ”
Denis Davydov

Denis Vasilievich Davydov, famous poet - partisan, was born on July 16 1784 in the family of brigadier Vasily Denisovich Davydov, who served under the command of A. V. Suvorov. The brightest impression of childhood is a meeting with the legendary commander who predicted the boy: “It will be a military man ...”. Parents gave their son an excellent home education. With the help of his father, he soon joined the military, brilliantly mastered horse riding. But he suffered because he was short, snub-nosed, ugly. In 17 years he already served as a cadet in the Cavalry Guard Regiment, a year later he received the rank of cornet. The officers loved the wit, modesty and charm of the personality of this small-growth military. From 1807, Davydov was appointed adjutant of Prince Bagration. Together with him he took part in battles with the French, the Swedes, the Turks, showing himself to be a desperately brave warrior. By the beginning of the 1812 war, he was already a lieutenant colonel of the Akhtyrsky Hussars, who were in the vanguard of General Vasilchikov's troops.
Just a few days before the Borodino battle, watching the soldiers dismantle his father’s house in the village of Borodino, where his childhood was spent, Davydov suggested the expediency of guerrilla actions behind enemy lines. He borrowed this idea from the Spanish partisans (Guerillaces), whom Napoleon could not defeat until they had joined the regular army. Davydov filed a report with Bagration asking him to provide him with people to create a partisan detachment. Under his beginnings, he received 50 Hussars and 80 Cossacks, and the first began to use guerrilla methods in fighting the enemy. 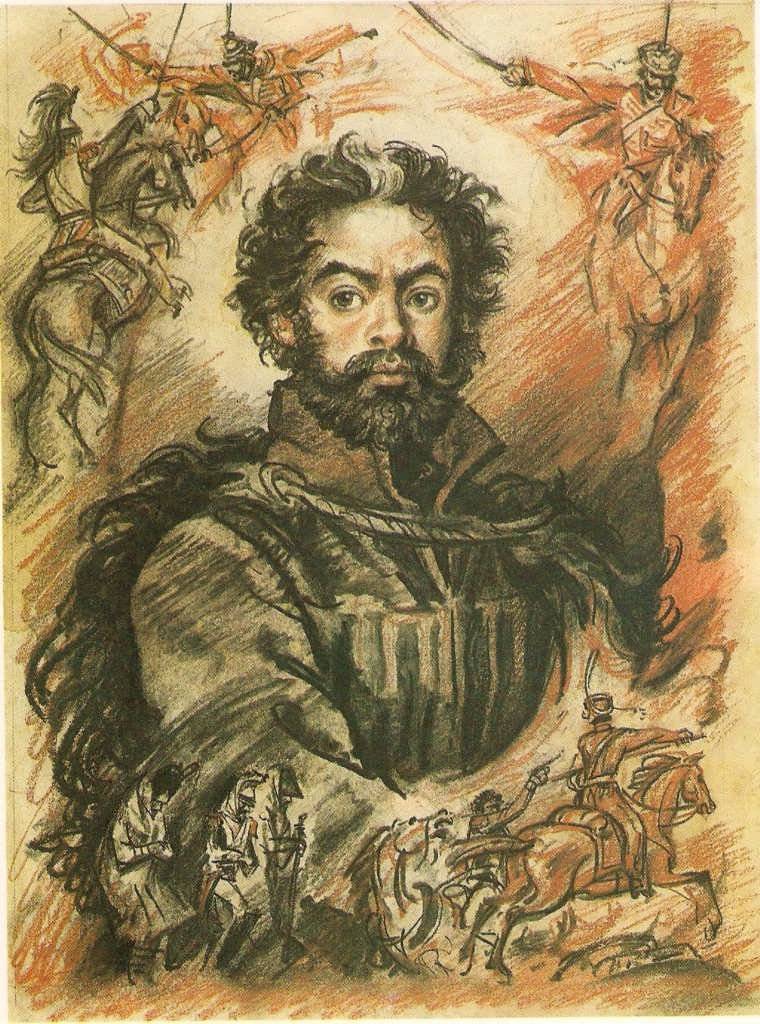 It was Davydov’s successes in the partisan struggle that convinced Kutuzov that the people in his deep rear could be beaten by the people, and the commander gave it a wider development. Davydov's outstanding feat was a battle near the village of Lyakhov, when he captured 2 000 soldiers from the unit of General Augereau. Successful actions of the detachment under the command of Denis Davydov led to the liberation of the city of Grodno, for which he was promoted to colonel. It is known that Napoleon fiercely hated Davydov and ordered him to be shot on the spot during his arrest. The Emperor singled out a special squadron in 2 000 riders with 8 chief officers and 1 headquarters officer to capture the first partisan. However, Davydov with his thousandth detachment lured the French into a trap and captured with all the officers.

Davydov fought no less successfully after the border was crossed by the Russian army, differing in almost all the battles in which he took part. So, with the vanguard, he occupied the city of Dresden and was put under house arrest for it, since he acted without an order. All of Europe laid down legends about a brave partisan, and residents of the cities occupied by Russian troops took to the streets to see Davydov. In 1815, he was given the rank of Major General for a battle near Paris, where 5 horses were killed near Davydov, but he nevertheless broke through to the French battery and hacked a servant, deciding the outcome of the battle. He had to fight and later - in 1827, he successfully fought against the Persians, and in 1831 he suppressed the performances of the Polish insurgents. In the same year he received the rank of lieutenant general, and a year later he retired on conditional duty, being in service until his death in the 1839 year. 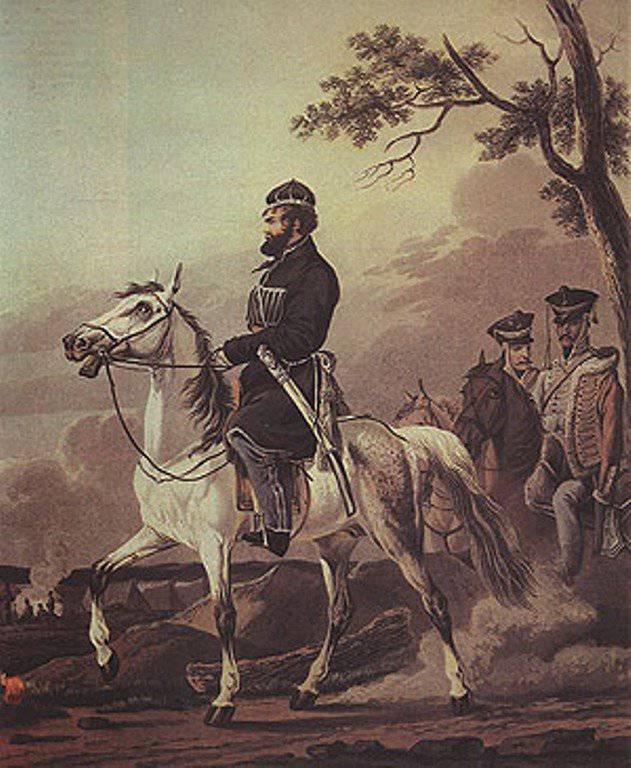 D.V. Davydov. The painted engraving of M. Düburg according to the original by A. Orlovsky. Xnumx

Davydov described his military adventures in his memoirs “The Diary of Partisan Search for 1812 of the Year” and “Military Notes”, left memories of A.V. Suvorov, N.N. Raevsky, M. Kamensky. But his main work is a unique book, The Experience of the Theory of Partisan Action, published in 1827 year. She entered the military history Russia as the first study of the theory of "small war", created by the Russian author in Russian material.
Davydov was the first to point out that by the beginning of the 19 century, the European armies had become numerous and complex in design, but vulnerable in the area of ​​the rear. And Russia can easily make guerrilla warfare the main state defense policy, because it has two factors that give an advantage over European countries. These factors are the presence of "true" light cavalry - the Cossacks (the Cossacks combined the military art of the East and West, possessing high combat qualities) and the vastness of the territory, giving the opportunity to retreat, evading enemy strikes, as in 1812 year. For the convenience of controlling the partisan detachments, Davydov proposed dividing them into three categories. Detachments of the first category conduct combat operations in the rear of the enemy army, detachments of the second category act on enemy communications, and third category conduct searches on supply lines of enemy troops. Formed and "emergency" party guerrillas as a operational reserve. The main tactical action of the partisans, noted Davydov, should be a sudden attack from an ambush. In addition, Davydov also considered important the choice of a partisan commander, whose role in a guerrilla war is much more responsible than the role of an ordinary officer. The book Davydov still demanded by interested readers.

In his personal life, Davydov was as lucky as in military affairs. He ardently loved his wife Sofia Nikolaevna, who bore him 9 children. The last years of his life the poet-partisan was an exemplary family man, striving from everywhere to his wife and children. He conducted an extensive correspondence, had a huge number of friends, was close to Pushkin, was associated with many Decembrists, who appreciated his political poems, but refused to join the secret society. In the history of Russian literature, Davydov is the creator of the “hussar lyrics”, whose hero is a young military man, who loves a riotous rampage, love adventures, delete my life and at the same time is opposed to personal violence, a free-thinking man. 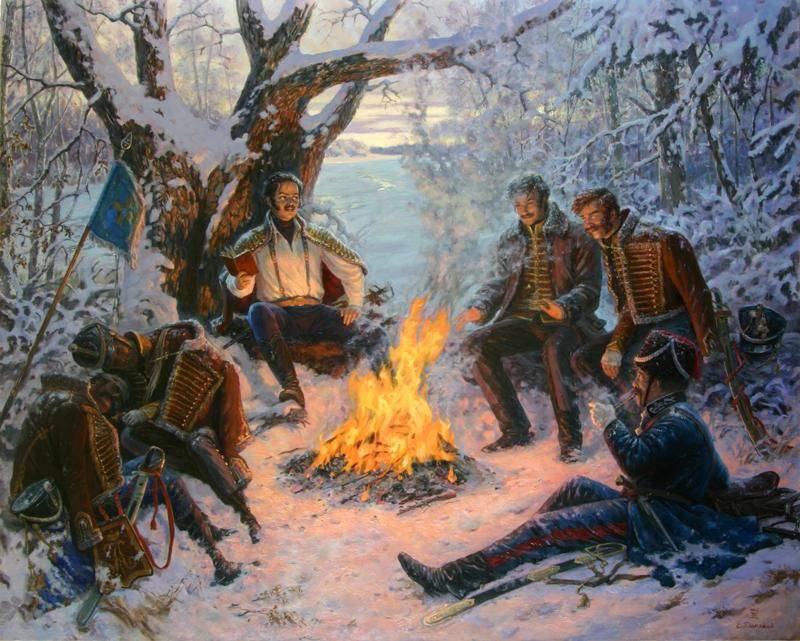 All those who knew this person noted his unchanging "youth of heart and morals," a cheerful character that infects others, he was always the soul of friendly meetings.

Denis Vasilievich Davydov remained in the memory of the Russian people as a Hero of the Patriotic War, an original author of military notes, a talented poet who enjoyed fame and attention during his lifetime and was not forgotten after his death. It should be noted and another merit Davydova to Russia. It was on his initiative that the ashes of Prince Bagration were reburied in the Borodino field. And by the centenary of World War 26 August 1912, the Akhtyrka hussars regiment was named after Denis Davydov. 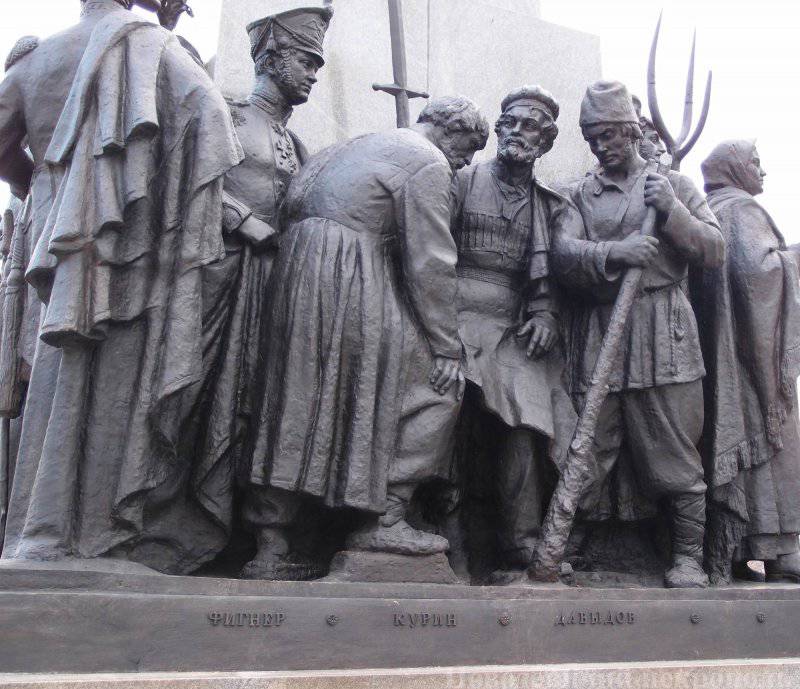