Microsoft will open a research and development center in the Skolkovo Innograd. The opening agreement was signed by the President of the Skolkovo Foundation Viktor Vekselberg and the Vice-President of Microsoft Kirill Tatarinov. Steve Ballmer’s company will invest several tens of millions of dollars for which the center will conduct research and participate in the development of Microsoft Dynamics business systems. By 2015, it is planned to attract more than 100 Russian specialists to work at the center.

The American company Microsoft is one of the major foreign partners of Innograd, which also include Boeing, Intel, Cisco, Dow Chemical, IBM from the USA. In addition, Skolkovo’s partners include world giants such as Finnish Nokia, German Siemens and SAP, French Alstom, Swedish Ericsson, EADS from the Netherlands, and Technopark Zurich, a Swiss technopark. 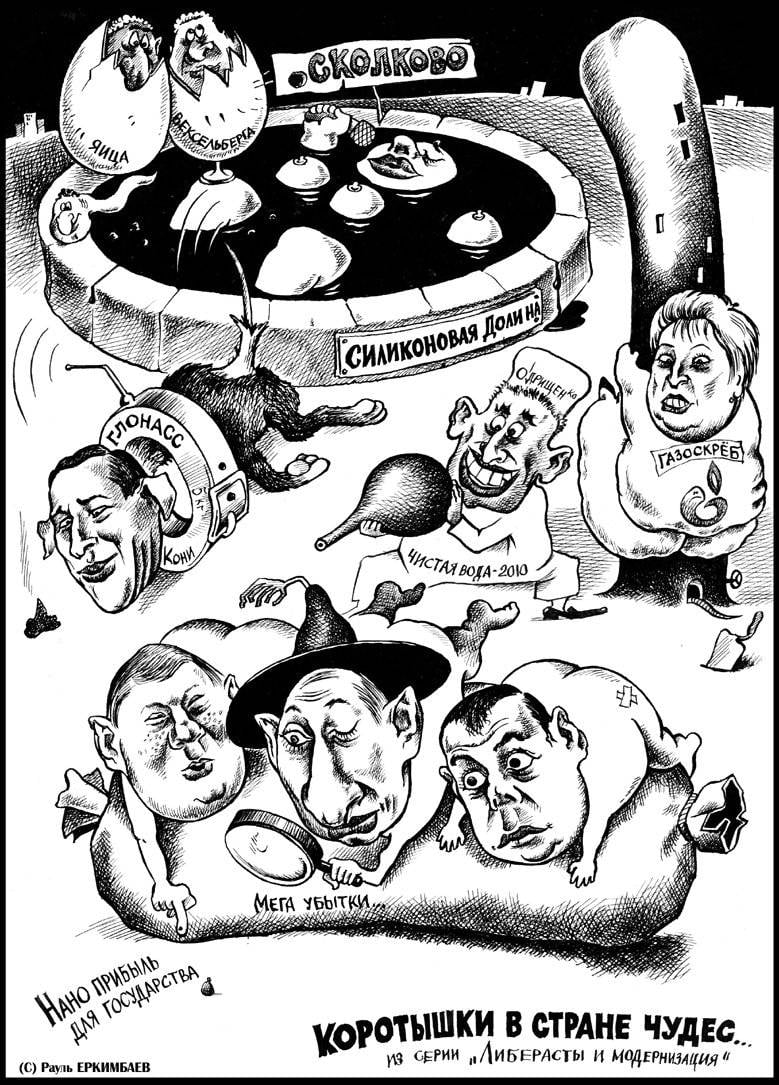 The Skolkovo Innograd in the Moscow Region was conceived as the Russian equivalent of Silicon Valley in the USA, but now it is actually becoming its branch. Foreign partner companies are planning to open at least 16 their research centers in Skolkovo. And of the largest “conditionally Russian” companies, only KamAZ “announced” so far. Why "conditional"? Yes, because the major shareholders of KAMAZ are the offshore company Avtoinvest Limited (24,5%), the German Daimler AG (11%), the company KAMAZ International Management (4,25%) is also of offshore origin and the European Bank for Reconstruction and Development (4%). Apparently "Innograd" in this case should be read from the word "foreign."

Foreign companies will begin to invest in Skolkovo, naturally, in order to provide themselves with new technologies, not the Russian economy. At the same time, they will buy labor of Russian scientists and specialists several times cheaper than it can be bought in the same Silicon Valley, where salaries and the cost of maintaining developers are more expensive at times. It turns out that Vekselberg and the company have created a good export trading business with the most expensive kind of Russian “raw material” - intellectual and will cut the “natural rent” from this. Moreover, as it turned out, Skolkovo was established as a “foreign branch” quite officially and even documented.

According to the "Regulations on the Assignment and Loss of Status of a Skolkovo Project Participant, the project submitted by the applicant company" involves the participation of a foreign specialist who has considerable authority in the investment or research environment. In this case, the consent of the alien to participate in the project must be confirmed by a written statement. And do not buy the wording “assumes” - the requirement of foreign participation is categorical. The representative of the investment service of the Skolkovo Foundation, Petr Lukyanov, answering questions on the official website, explained that the presence of a foreigner in the application is an obligatory condition; without it, the application will not even be accepted.

As Aleksey Beltyukov, director of development and planning of the Skolkovo Foundation, said during the hotline at Rossiyskaya Gazeta, “Foreigners are needed for Skolkovo participating companies to be included in the international scientific and investment community. So that there is no such thing: we do something in our small “garden”, we don’t show it to anyone, we don’t communicate with anyone and we know everything best of all. We tried it several times already, and somehow it doesn't work very well. Therefore, a very thoughtful and reasonable decision was made: a company that the state will support as a Skolkovo member must necessarily present its foreign partner. ”

Beltyukov is especially upset when he is constantly asked: why is such an obstacle being introduced for Russian companies? “This is not an obstacle, but, on the contrary, a new opportunity,” explains the director of the fund. - This is a plus, not a minus. As long as people think that attracting foreign specialists is a minus, until then we will continue to hang out in our own sandbox and never go global. This is very unpleasant to realize, it is not consistent with our post-Soviet scientific and technical mentality. But otherwise, Skolkovo would not have been created. ”

It’s just not clear why the Americans buried themselves in their “sandbox” in the “Silicon Valley” and didn’t show anything to anyone. Scientists in the "valley" work primarily for the United States, and foreign experts are invited solely in order to develop American companies. But on the contrary, priority is given to foreign participation in projects.

And here the main question of Skolkovo arises - about the ownership of scientific inventions, models and patents for them. Who exactly will own these patents, in whose interests scientific developments and inventions will be used? The scientific intellectual capital of Russia is expensive, so we need an answer to the question in whose particular interests discoveries and inventions will be made, and who exactly will be able to use them from a commercial point of view. However, the answer to these questions is securely hidden in contracts and investment agreements for the production of scientific research in the territory of Skolkovo, concluded by the fund with foreign companies.

In the end, is it possible that only Vekselberg and a number of foreign companies will be able to take advantage of Skolkovo? What a huge public money will be “privatized” intellectual capital, which can not be realized on the territory of Russia. So far, no clear answer has been given to all these questions either from Vekselberg or Dmitry Medvedev, who oversees Skolkovo, heading its Board of Trustees. But to look into the constituent documents of the Skolkovo Foundation, agreements and agreements with foreigners will not work - a trade secret. So what is Skolkovo?

The Fund for the Development of the Center for the Development and Commercialization of New Technologies Skolkovo is a non-profit organization created on the initiative of the former President of Russia Dmitry Medvedev in September 2010. The activity of the center is regulated by a special law that provides its residents with special economic conditions.

Vekselberg immediately announced the need to develop a special legal regime at Skolkovo and tax holidays for businesses on 5-7 years, but the authorities went even further. According to Elvira Nabiullina, when she was head of the Ministry of Economic Development, “It is proposed that the peculiarities of the legal regime in Skolkovo be established by a separate law. This law would introduce the following features: first, tax and customs benefits. Secondly, simplified urban planning procedures. Thirdly, the simplified rules of technical regulation. Fourthly, special sanitary rules and fire safety rules. Fifth, lightweight conditions for interaction with the authorities. ” Assistant to the President of Russia Arkady Dvorkovich added that it is planned to introduce not even 7-summer, but 10-summer vacation on income tax, property tax and land tax, and the rate of social contributions should be only 14%. Two bills on the working conditions of the Skolkovo innovation city, submitted to the State Duma by President Medvedev, were accepted by the deputies in the fall of 2010, but experts still have questions about Skolkovo ...

“The concept of the Skolkovo innovation city initially raised great doubts in me, primarily due to the transfer of more than 300 hectares of expensive land near Moscow to it,” said Andrei Bunich, President of the Union of Entrepreneurs and Tenants of Russia, told “SP”. - After all, no one thought of building a "Silicon Valley" in Beverly Hills, and we still have only to place the territory of the innovation city on the ruble. Maybe that is why the emphasis is on foreign companies that can buy or rent property under the center in such an expensive place as Skolkovo near Moscow. This “special regime” of the work of the innograd also causes doubts - beyond the line of Russian legislation, I remember, someone even suggested that English law be maintained there. All this is very similar to another internal offshore, which is much closer to the capital than Chechnya or Ingushetia. In addition, in Skolkovo there is a palace of the main curator of the project - Igor Shuvalov, a palace that Harun al Rashid would envy, and Shuvalov’s wife owns large tracts of land there.

So we can safely say that this project is being done either for corruption purposes - for cutting state money, or for sale to foreigners, or both. In any case, it is not only unhealthy for the country's economy, but even harmful. Because billions of state budget money creates an infrastructure that will be used by foreign companies for their own benefit. In addition, there will be selling Russian "brains", and cheaper. As they confessed to Boeing, a member of Skolkovo, it is much more profitable and convenient for them not to take out Russian scientists to work in the company in the USA, but to make their center here and let it work as an outsourcer. Microsoft does the same thing ...

In the meantime, experts believe that a full-fledged innograd with a laboratory base, experimental production, a technopark and a social infrastructure is simply impossible to place on an area of ​​only 375 ha. And for comparison, the science city of Dubna, with an area of ​​7100 hectares, not to mention the American "Silicon Valley" - about 400 thousand hectares. True, Vekselberg appealed to First Deputy Prime Minister Igor Shuvalov with a request to add 103 hectares to the existing ones, and the government commission on housing development determined that this would require ... redeeming the land of Olga Shuvalova. Here you have a "family contract".

Ctrl Enter
Noticed a mistake Highlight text and press. Ctrl + Enter
We are
We've been waiting for this for twenty years.Grief without difficulty. What eats away the gills of the nation?
31 comment
Ad