"James Webb": what will see the most advanced telescope in the world


One day someone said: the creators of Hubble need to erect a monument in every major city on Earth. His merits are very, very much. So, for example, with the help of this telescope, astronomers obtained a picture of a very distant galaxy UDFj-39546284. In January, 2011, scientists found that it is located further than the previous record holder - UDFy-38135539 - approximately 150 million light years. Galaxy UDFj-39546284 is removed from us on 13,4 billion light years. That is, Hubble saw stars that existed more than 13 billion years ago, through 380 million years after the Big Bang. These objects are probably no longer “alive”: we see only the light of the long dead luminaries and galaxies.

But for all its merits, the Hubble Space Telescope is a technology of the past millennium: it was launched in the 1990 year. Of course, over the years, technology has leaped forward. Hubble telescope appeared in our time, its capabilities would have enormously surpassed the original version. That's how James Webb appeared. 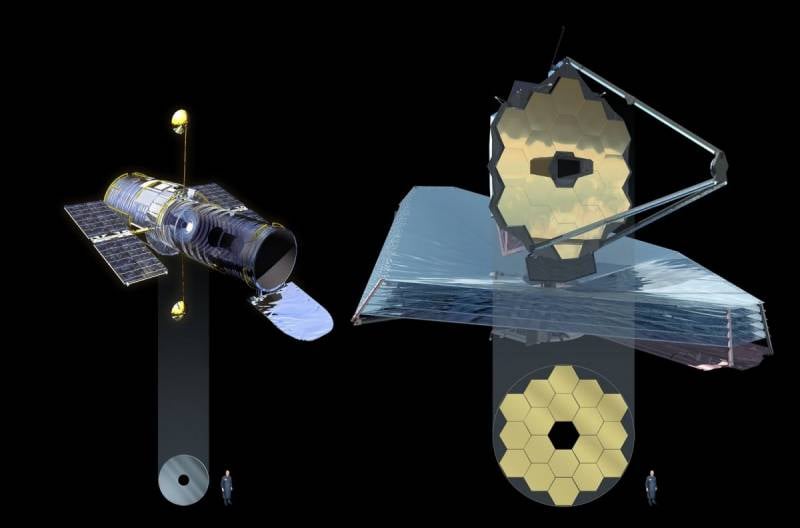 What is useful "James Webb"

The new telescope, like its ancestor, is also an orbital infrared observatory. This means that its main task will be the study of thermal radiation. Recall that objects heated to a certain temperature emit energy in the infrared spectrum. The wavelength depends on the heating temperature: the higher it is, the shorter the wavelength and the more intense the radiation.

However, there is one conceptual difference between telescopes. Hubble is in low Earth orbit, that is, it rotates around the Earth at an altitude of approximately 570 km. “James Webb” will be launched into halo orbit at the Lagrange point L2 of the Sun-Earth system. It will rotate around the Sun, and, unlike the situation with the Hubble, the Earth will not disturb it. The problem immediately arises: the further the object is from Earth, the more difficult it is to contact it, therefore - the higher the risk of losing it. Therefore, "James Webb" will move around the light in sync with our planet. In this case, the removal of the telescope from the Earth will be 1,5 million km in the direction opposite to the Sun. For comparison, the distance from the Earth to the Moon is 384 403 km. That is, if the equipment of "James Webb" fails, repair it, most likely, will not work (except in a remote mode, which imposes serious technical limitations). Therefore, a promising telescope is made not only reliable, but also extremely reliable. This is partly due to the constant postponement of the launch date.

There is another important difference with James Webb. The equipment will allow him to concentrate on very ancient and cold objects that Hubble could not have considered. So we will know when and where the first stars, quasars, galaxies, clusters and superclusters of galaxies appeared.

The most interesting discoveries that a new telescope can make are exoplanets. To be more precise, we are talking about determining their density, which will allow us to understand what type of object is in front of us and whether such a planet could be potentially habitable. With the help of "James Webb" scientists also hope to collect data on the mass and diameter of distant planets, and this will open up new data on the native galaxy.

The equipment of the telescope will allow detecting cold exoplanets with surface temperatures up to 27 ° C (the average temperature on the surface of our planet is equal to 15 ° C). “James Webb” will be able to find such objects located at a distance of more than 12 astronomical units (that is, distances from the Earth to the Sun) from their luminaries and remote from the Earth at a distance to 15 light years. Serious plans relate to the atmosphere of the planets. Telescopes "Spitzer" and "Hubble" were able to collect information about about a hundred gas shells. According to experts, the new telescope will be able to investigate at least three hundred atmospheres of different exoplanets.

A separate point is to highlight the search for hypothetical stellar populations of type III, which should constitute the first generation of stars that appeared after the Big Bang. Scientists estimate that these are very heavy luminaries with a short lifetime, which, of course, no longer exist. These objects had a large mass due to the absence of carbon, which is necessary for the classical thermonuclear reaction, in which heavy hydrogen is converted into light helium, and excess mass is converted into energy. In addition to all this, the new telescope will be able to study in detail the previously unexplored places where stars are born, which is also very important for astronomy. 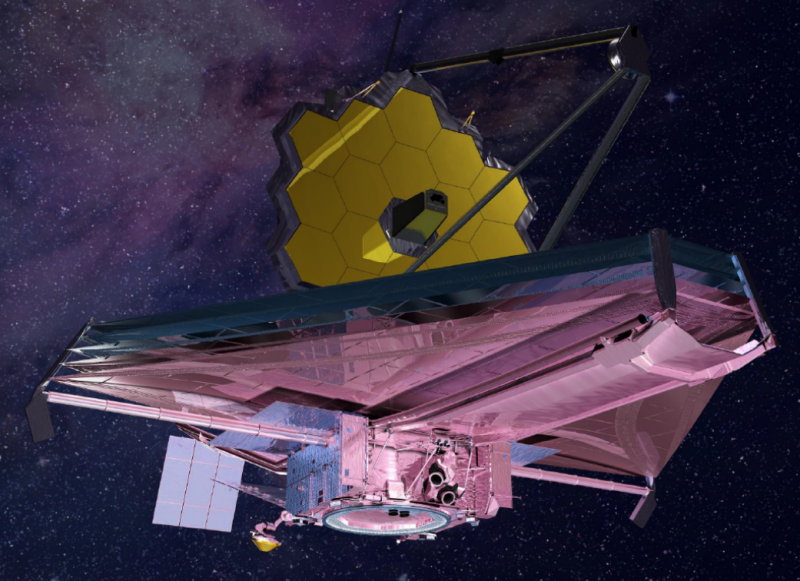 The main tasks of the new telescope:

- Search and study of the most ancient galaxies;
- Search for earth-like exoplanets;
- Detection of stellar populations of the third type;
- The study of "star cradles"

The device was developed by two American companies - Northrop Grumman and Bell Aerospace. James Webb Space Telescope is a work of engineering. The new telescope weighs 6,2 T - for comparison, the Hubble has a mass of 11 T. But if the old telescope can be compared in size with a truck, then the new telescope is comparable to a tennis court. Its length reaches 20 m, and its height is like that of a three-story house. The largest part of the James Webb Space Telescope is the huge anti-sun shield. This is the basis of the whole structure, created from a polymer film. On the one hand it is covered with a thin layer of aluminum, and on the other - metallic silicon.

The sun shield has several layers. The void between them fills the vacuum. This is necessary to protect the equipment from the "heat stroke". Such an approach makes it possible to cool supersensitive matrices to –220 ° C, which is very important when it comes to observing distant objects. The fact is that, in spite of the perfect sensors, they could not see the objects due to other “hot” details of “James Webb”.

In the center of the design - a huge mirror. This is a “superstructure” that is needed to focus light beams - a mirror straightens them, creating a clear picture. The diameter of the main mirror of the telescope “James Webb” is equal to 6,5 m. It includes 18 blocks: during the launch of the carrier rocket, these segments will be in a compact form and will open only after the apparatus leaves into orbit. Each segment has six corners - this is done to make optimal use of the available space. And the round shape of the mirror makes it possible to best focus the light on the detectors.

For the manufacture of the mirror, beryllium was chosen - a relatively hard metal of light gray color, which, among other things, is characterized by high cost. Among the advantages of this choice is that beryllium retains its shape even at very low temperatures, which is very important for correct collection of information. 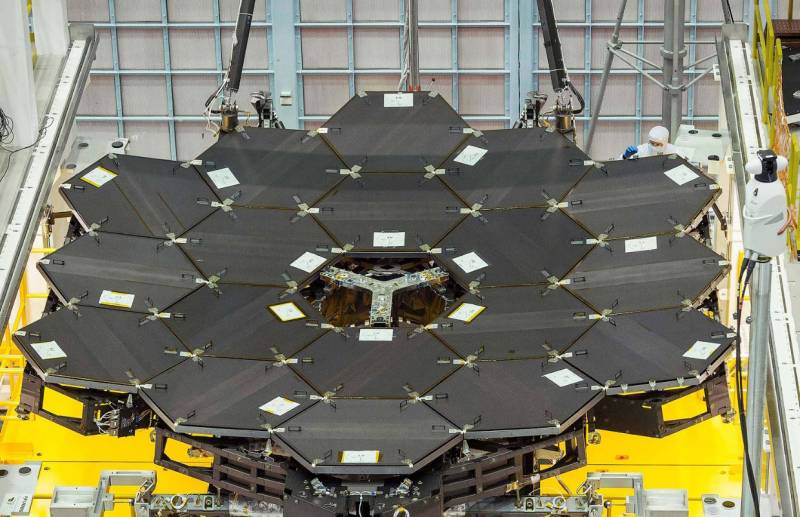 An overview of the perspective telescope would be incomplete if we did not focus on its main instruments:

MIRI. This is a mid infrared device. It includes a camera and a spectrograph. The structure of MIRI includes several arrays of silicon-arsenic detectors. Due to the sensors of this device, astronomers hope to consider the red shift of distant objects: stars, galaxies and even small comets. Cosmological redshift is the lowering of radiation frequencies, which is explained by the dynamic removal of sources from each other due to the expansion of the Universe. What is most interesting, it is not just about fixing a particular remote object, but about obtaining a large amount of data about its properties.

NIRCam, or the near-infrared camera, is the main telescope imaging unit. NIRCam is a complex of mercury-cadmium-tellurium sensors. The operating range of the NIRCam device is 0,6-5 µm. It's hard to even imagine what secrets NIRCam will help solve. Scientists, for example, want to create a dark matter map using it, using the so-called gravitational lensing method, i.e. finding clots of dark matter in their gravitational field, noticeable in the curvature of the trajectory of nearby electromagnetic radiation.

NIRSpec. Without a near-infrared spectrograph, it would be impossible to determine the physical properties of astronomical objects, such as mass or chemical composition. NIRSpec can provide medium resolution spectroscopy in the wavelength range from 1 to 5 µm and low resolution with a wavelength of 0,6-5 µm. The device consists of a set of cells with individual control, which allows you to focus on specific objects, “screening out” unnecessary radiation.

FGS / NIRISS. This is a pair consisting of a precision pointing sensor and a near-infrared imaging device with a gapless spectrograph. Due to the precision guidance sensor (FGS), the telescope will be able to focus as accurately as possible, and at the expense of NIRISS, the scientists intend to conduct the first orbital tests of the telescope, which will give a general idea of ​​its state. It is also assumed that the imaging device will play an important role in observing distant planets. 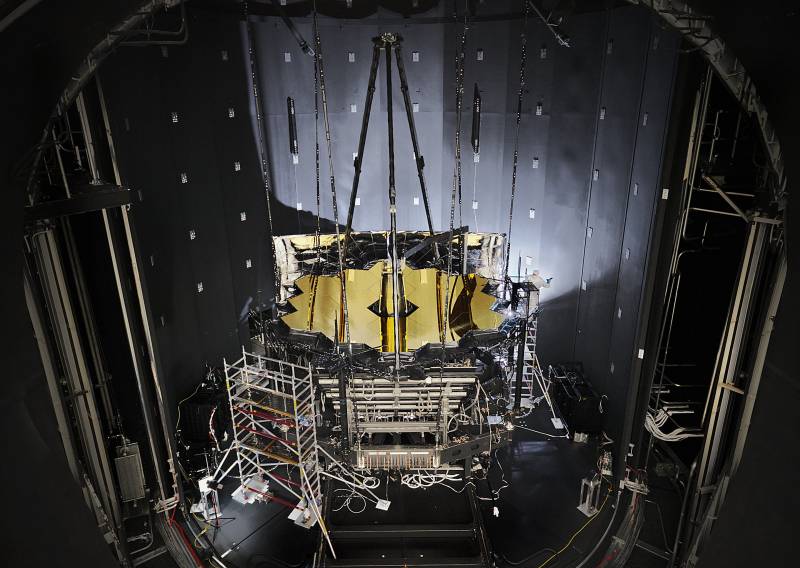 Formally, the telescope intends to operate five to ten years. However, as practice shows, this period can be extended indefinitely. And “James Webb” can provide us with much more useful and simply interesting information than anyone could have imagined. Moreover, it is now impossible to even imagine what kind of "monster" will replace the "James Webb" itself, and what astronomical sum will cost its construction.

Back in the spring of 2018, the project price increased to an unthinkable $ 9,66 billion. For comparison, NASA's annual budget is about $ 20 billion, and Hubble was worth $ 2,5 billion at the time of construction. In other words, James Webb has already entered history as the most expensive telescope and one of the most expensive projects in the history of space exploration. Only the lunar program, the International Space Station, the shuttles and the global GPS positioning system cost more. However, “James Webb” is still ahead: its price can still grow even more. And although experts from 17 countries participated in its construction, the lion's share of funding still lies on the shoulders of the States. It must be assumed that this will continue.

We are in Yandex Zen
Russian challenge to Ilona Mask. S7 Space Company
I can see everything from above, and you know
19 comments
Information
Dear reader, to leave comments on the publication, you must to register.