Battle for the North Caucasus. CH 5. Capture of Kizlyar and the Terrible


Most of the defeated 11 army fled - part to Vladikavkaz, most - to Mozdok. East of the 12-I army occupied the region of Grozny and Kizlyar, covering the only path of retreat - the Astrakhan highway. In the area of ​​Vladikavkaz there were also the Reds — units of the North Caucasian Republic and highlanders. Thus, the Reds had about 50 thousand people in the North Caucasus. True, they were poorly organized, for the most part already demoralized and lost their fighting capacity, had serious supply problems. To restore the Red Army’s combat capability in the North Caucasus, it was necessary to regroup, replenish, restore iron order, and establish supply.

The White Command, in order not to allow the enemy to recover, continued to develop the offensive with the aim of the final destruction of the Red forces. The Volunteer Army (YES) was reorganized in January 1919 - after the creation of the Crimean-Azov Volunteer Army on the basis of the Crimean-Azov Corps, YES received the name Caucasian Volunteer Army and was headed by Wrangel. It consisted of all the troops standing on the front from Marvelous to Nalchik. The immediate task for the army of Wrangel was the liberation of the Terek region and access to the Caspian Sea. On January 21, after the occupation of Georgievsk, the Cossack division Shkuro from the Pyatigorsk-Mineralnye Vody region was sent to Kabarda and on January 25 captured Nalchik, and January 27 - Cool. From the area of ​​the Cool 3 Army Corps of Lyakhov, which included the Shkuro and General Geiman divisions, was sent to Vladikavkaz, and the 1 Horse Corps, which led Pokrovsky, along the railway line to Mozdok - Kizlyar. To cover the Astrakhan direction and Stavropol Wrangel left a detachment of Stankevich on Manych and a division of Ulagay at the Holy Cross.

Pokrovsky's cavalry pursued the 1 and 2 rifle divisions, the Kochergin brigade and the 11 armored train, which retreated along the railway line to Mozdok - Kizlyar. Bypassing maneuvers, White constantly threatened the flank and rear of the retreating Red forces. The White Guards tried to intercept the path of retreat, surround and destroy the red group in the area of ​​Mozdok. The withdrawal of troops 11-th army was largely spontaneous. The bulk of the troops threw guns, huge transports and tried to get to Astrakhan. People were killed by severe frost and mowed down by typhoid. Lagging groups sought Cossack and Kalmyk troops. 28 January Pokrovsky defeated the Reds in the area of ​​Mozdok. The White Guards captured thousands of prisoners, many people drowned in the Terek during the flight.

The retreat of the defeated troops of the 11 army tried to cover with the help of the forces of the 12 army. 28 January 1919, the battalion of the Lenin regiment of the 12 Army arrived in Kizlyar. The rest of the regiment battalions were to arrive after him. It was late assistance from the 12 Army, which could no longer change the overall situation of the disaster. 1 February 1919 The Leninsky regiment took up positions at the turn of the villages of Meken and Naur. The rearguard also included the Kochubey Cavalry Brigade and the Communist Cavalry Regiment. Also, they should have been reinforced by the Derbent Rifle Regiment of the 1 Division, which retained the greatest organization and fighting capacity of the rest of the troops.

February 1 Leninsky regiment repelled two white attacks. February 2 White resumed the offensive, trying to bypass the Reds position at Meken and reach the Terek station. A stubborn battle broke out. The white cavalry reached the Terek station, causing panic there among the running troops of the 11 Army. At the same time, White attacked the positions of the Reds at Meken and Naur. The Lenin regiment, supported by the attacks of Kochubey's cavalry, met the enemy with strong fire and successfully repulsed the first attacks of the enemy. In the afternoon of February 2, the Wrangel men pulled up heavy artillery and opened heavy fire on the Naur and Meken. The White Guards surrounded the Naursky reserve, but the reserve of the Lenin regiment, thrown into the counterattack, the 3 th battalion, temporarily rectified the situation. However, soon the white cavalry attacked the Communist cavalry regiment in Nadterechnaya from the rear and broke into Meken. The position of the Red forces became critical. Lenin's regiment in a fierce battle lost half its composition. At night, the Reds moved in an orderly manner to the Terek station, and then to Kizlyar. 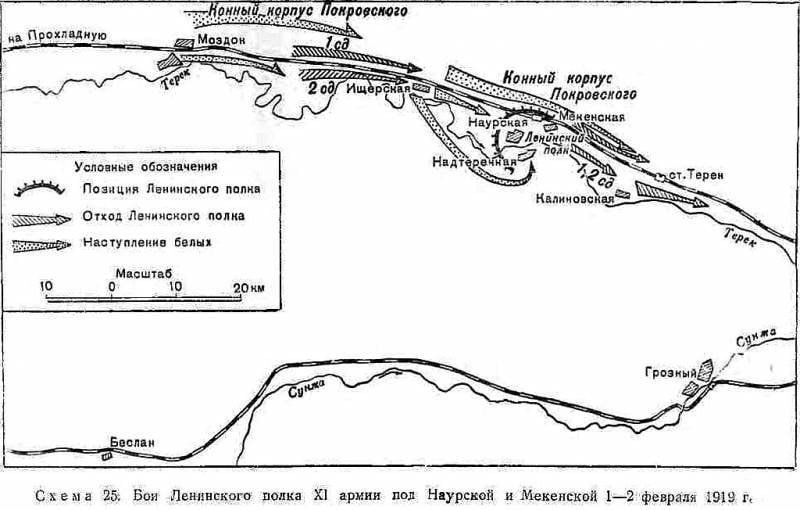 The heroism of individual units that retained combat capability — the Leninsky regiment, the Kochubey brigade, could not change the position of the 11 Army. Winning two days could not restore order and the fighting capacity of other troops. 3 - February 4 red command, not seeing the opportunity to organize a defense in the region of Kizlyar, decided to leave for Astrakhan. The remnants of the 11 Army were to have a 400-kilometer route through a bare, waterless desert, in winter conditions, without provisions and places to rest. Only near Logan, Promyslovoy, Yandykov, halfway to Astrakhan, were they able to provide some help to the fugitives. The organization of assistance involved in the Kirov. However, food, medicine and doctors were extremely few to help everyone. The epidemic of typhus continued to rage, which affected almost everyone and spread to the surrounding villages.

Thus, the retreating red troops, reaching Yandykov, after overcoming the extremely difficult 200-kilometer route from Kizlyar were still in a very difficult situation: there was nothing to feed them, there were no medicines and medical staff, there was nowhere to warm people and to give the necessary rest to continue the hike. About Astrakhan got about 10 thousand sick people. On February 15, by order of the RVS of the Caspian-Caucasian Front, the Revolutionary Military Council of the 11 Army was liquidated, and the Red Army of the North Caucasus ceased to exist. From the remnants of the 11 Army, two divisions were formed: the 33-i Rifle and 7-I cavalry, which became part of the 12-y army.

February 6 Kizlyar occupied the cavalry of Pokrovsky. The Wrangelists established a connection with Khasavyurt with the Terek Cossacks of General Kolesnikov, who were stationed in Petrovsk. The remnants of the Reds were scattered over the mountains, several thousand carved north of Kizlyar. White and red terror in the Civil War were commonplace. The Whites, successfully advancing, in the occupied villages, massacred the captive and wounded Red Army soldiers (many joined the White Army under the threat of death), massacred civilians, who were noted in cooperation with the Bolsheviks. Typhus, winter and desert killed others. Few, pathetic groups of hungry, freezing and sick people got to Astrakhan.

The typhoid epidemic may have killed more people than the fighting itself. Wrangel recalled: "In the absence of order and properly organized medical care, the epidemic assumed unheard-of dimensions." The patients were filled with all the available premises, the cars standing on the sidings. There was no one to bury the dead, still alive, left to themselves, wandered in search of food, many fell and died. The railway from Mozdok and beyond was filled with abandoned guns, carts of carts, “mixed with horse and human corpses”. And further: “At one of the crossings, we were shown the train of the dead. The long line of cars of the sanitary train was completely filled with the dead. There was not a single person in the whole train. In one of the cars lay several dead doctors and sisters. ” White had to take emergency measures to prevent the spread of the epidemic, to clear the road, railway stations and buildings from the sick and the dead. Looting flourished, the locals stole the abandoned property of the deceased army.

According to Wrangel, whites captured more than 31 thousands of captured 8 armored trains, more than 200 guns and 300 machine guns. The Red Army in the North Caucasus, except for units in the Sunzha valley and in Chechnya, ceased to exist. Wrangel ordered Pokrovsky to remain with part of the troops in the Kizlyarsky Division, believing that one division was enough to pursue the Reds retreating to the sea, and sent other forces under the command of General Shatilov south to the mouth of the Sunzha and Grozny River to intercept the enemy retreating from Vladikavkaz.

The only part that retained the operational status was the Kochubey brigade. However, he was not lucky. He came into conflict with the authorities, saying that the catastrophe of the army is associated with treason. As a result, Kochubey was accused of guerrilla and anarchy, the brigade was disarmed. Kochubey with several soldiers fled across the desert towards the Holy Cross, where he hoped for help from another famous red commander of the Redneck. However, in the Holy Cross were already white, Kochubey grabbed. The celebrated commander was urged to go over to the side of the White Army, but he refused. 22 March he was executed, the last words Kochubey were: "Comrades! Fight for Lenin, for Soviet power! ” 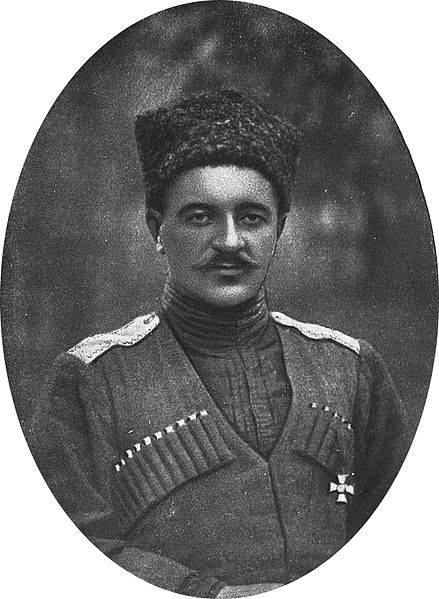 Capture of the Terrible

In order to intercept the Red troops, retreating from the region of Vladikavkaz, Wrangel sent a division of Shatilova to the south to take Grozny. In addition, the White Command received the news that the British want to limit the advancement of the Volunteer Army, retaining the oil fields of Grozny beyond the local "independent" state entities, such as the Highland Republic. That the British, having landed in Petrovsk, began to move to Grozny.

Concentrating the troops at the village of Chervlennaya, Shatilov marched on Grozny. The terrain was severely ravaged by prior hostilities. In the Terek district, Cossacks and highlanders were massacred to death. Cossack villages, which turned out between the Chechen villages, mercilessly cut. The Cossacks responded in the same way, the villages of the highlanders that were between the villages were destroyed. Not a single resident in these villages remained, some were killed, others were taken prisoner or fled to their neighbors. In fact, the war between the times of the conquest of the Caucasus resumed between the Cossacks and the highlanders. The mountaineers in conditions of anarchy and distemper dissolved, created gangs, returned to the old craft - raids, looting and hijacking people in full. The Highlanders joined with the Bolsheviks in order to fight the White Cossacks, then they fought with the Reds.

Grozny’s oil fields have been burning for a long time. They were set on fire by the mountaineers as early as the end of 1917, during an attempt to seize the city. The Bolsheviks could not put out a strong fire. As Shatilov wrote: “Already with the approach to Grozny, we saw behind him on the heights a huge flame and a high cloud of black smoke. This burned part of the oil fields. By negligence, or there was intent here, but a few months before our arrival these fires began. ... The fire from burning gases and spilling oil reached such a force that it was completely light in Grozny at night. ”

4-5 February 1919 of the year after a two-day battle, White took Grozny. Artillery destroyed the wire with high voltage current around the city. Then the whites broke into the city from several directions. Particularly fiercely fought was a company of Chinese-internationalists from the Separate Detachment of the Cheka Pau Tisan. She fell almost entirely. The remnants of the red garrison fled to Sunzha, to the west of the Sunzha valley to meet the red, retreating from Vladikavkaz. 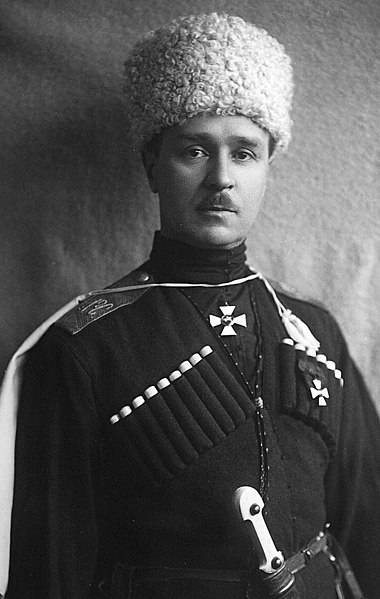 Commander of the 1 Cavalry Division of the Volunteer Army, General Pavel Nikolaevich Shatilov