February 7 2019
12
The suppression of the anti-Soviet Terek uprising strengthened the position of the Red Army in the North Caucasus. However, in general, the strategic initiative remained with the White Army. In addition, the Soviet troops had a serious problem with the logistics. After Stavropol was lost and the Reds were pushed back to the eastern part of the Stavropol Gubernia, the supply situation deteriorated further. Astrakhan was far away and the connection with her was unreliable. Thus, in October, 1918 from Astrakhan, via the 500-kilometer-long desert route through Yashkul to the Holy Cross and then by rail to Georgievsk-Pyatigorsk, a small amount of ammunition was delivered (100 thousand cartridges per week). New regiments arrived in Astrakhan and formed significant reserves, but they could not transfer them further to Astrakhan and Kizlyar.


In whites, however, the situation has improved with the capture of vast and rich areas of the Kuban, the Black Sea coast and parts of Stavropol. In addition, in November - December 1918, the Entente fleet appeared in the Black Sea. Denikin's army was supported by the Anglo-French imperialist predators who incited the fratricidal Civil War in Russia to dismember and plunder the Russian lands.

New reorganization of the Red Army

After the defeat at Petrovsky, the commander of the 11th Army Fedko was replaced by V. Kruse. In December 1918, an independent Caspian-Caucasian front was formed from the Southern Front, consisting of the 11th, 12th armies and the Caspian flotilla. The front was headed by M. Svechnikov. At the same time, the 11th Army was again reorganized: the previously formed 4 infantry and 1 cavalry corps were transformed into 4 rifle and 2 cavalry divisions, 1 reserve and 2 cavalry brigades. The total composition of the 11th army in mid-December 1918 was about 90 thousand people, of which two-thirds of active fighters.

The new reorganization failed to strengthen the Red Army in the North Caucasus. The main part of the troops was on the front line in the battles, that is, the units could not fully replenish, arm, give them a rest. The supply problem has not been resolved. In addition, the Red Command failed to fully utilize its significant cavalry formations. The cavalry remained an appendage of rifle units. The cavalry was scattered on the front, was subordinated to the commanders of rifle divisions, which were used to strengthen the infantry. As a result, the Reds could not organize massive strikes of horse-drawn joints in the main directions. 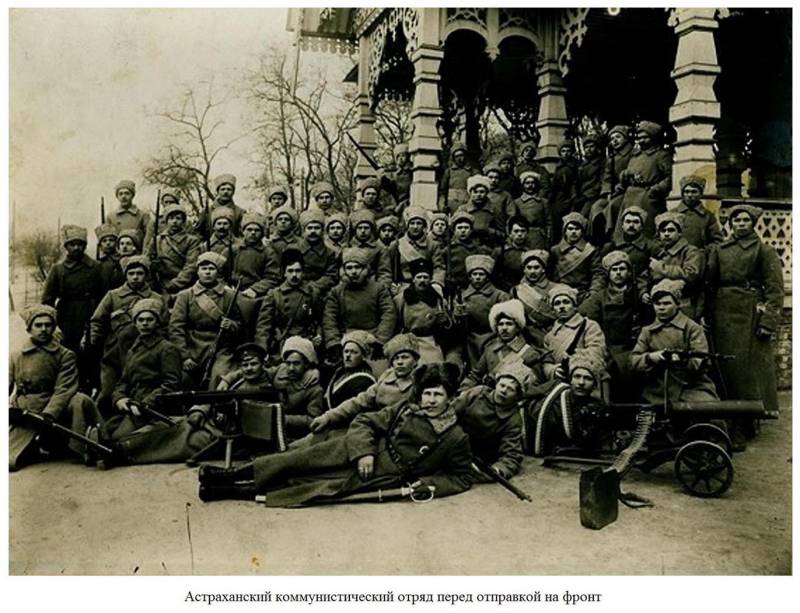 November 28 1918 of the Year The Revolutionary Military Council of the Caspian-Caucasus Division of the Southern Front ordered the main forces of the 11 Army along the Vladikavkaz Railway in the direction of Armavir - Kavkazskaya Station to divert some of the White forces from Tsaritsyn. This was already the fourth order of the 11 Army for assisting the 10 Army in the Tsaritsyn area, which resisted the onslaught of the Don Army (the White Cossacks of Krasnov). In August 1918, the entire Red Army of the North Caucasus was ordered to be taken to Tsaritsyn; in September, 1918 seized from the army of the North Caucasus and transferred to Tsaritsyn the most efficient "iron" division of the Redneck; 24 September RVS Southern Front demanded to organize an attack on Stavropol and Rostov-on-Don, which led to the hardest defeat in the Stavropol battle.

It is obvious that the RVS of the Southern Front, ordering the 11 Army, which had just experienced the hardest defeat at Armavir, Stavropol and Petrovsky, again went on the offensive in order to save Tsaritsyn, the position of the Red troops in the North Caucasus was poor. 11-I army could not immediately organize a new attack, and even during the next reorganization. However, fulfilling the order of the High Command, units of the 11 Army in December launched an offensive from the Kursavka area to Nevinnomyssk. The 2-Infantry Division and the Kochubey Cavalry Brigade (formerly part of the 9-th column and troops of the Nevinnomyssky Combat Division) operated on this sector. And the main attack in the direction of Batalpashisk - Nevinnomysskaya was to be inflicted by the 1-Infantry Rifle Division Mironenko (before the reorganization - the 1-I Shock Sharia column), which showed high combat capability during the defeat of the Terek Uprising.

1 December 1918 of the Southern Front RVS ordered the troops of the 11 and 12 armies to seize the ports of Novorossiysk on the Black Sea and Petrovsk on the Caspian Sea, the entire Vladikavkaz railway, the Tikhoretsk-Novorossiysk iron line, creating a base for further advance to the north and south-east . After the capture of Novorossiysk and Petrovsky was ordered to develop an offensive on Yeisk, Rostov, Novocherkassk and Baku. The troops of the 12 Army were to occupy the Gudermes-Petrovsk, Kizlyar-Chervlennaya railway, creating conditions for an offensive against Baku.

Thus, the Red Army in the North Caucasus was faced with a daunting task of liberating the entire North Caucasus, the Stavropol gubernia, the Kuban, and the Baku oil region. For this, it was necessary to crush Denikin’s army, which created conditions for the armies of the Southern Front to dismember and destroy the Don Krasnov army. In reality, the troops of the 11 and 12 armies could not implement such a strategic operation. Suffice it to say that the command of the new Caspian-Caucasian front did not even have data on the composition and grouping of Denikin’s army in the North Caucasus and very poorly represented the real position of the 11 army. The headquarters of the 11 Army, B. Peresvet was appointed as its head, and M. K. Lewandowski was appointed the head of the operational intelligence department in the beginning of December, just like the reconnaissance divisions. And data on the state of the enemy's army was collected only by the beginning of 1919, when the situation had already changed dramatically.

Meanwhile, the White Command also planned an offensive. 7 December 1918, the year Denikin instructed the corps of Wrangel, who was subordinated to the Stankevich detachment, to smash the Stavropol Reds group, throw it over the Kalaus River and seize the area of ​​Holy Cross. The corps of Kazanovich struck at Grateful, and thus covered the southern flank of Wrangel. Corps Lyakhova had to attack on the front of Kislovodsk - Mineralnye Vody. As a result, during December 1918, the oncoming battle of the 11 Red Army with Denikin’s army broke out.

As a result, a stubborn oncoming battle broke out. On the railroad, Soviet troops supported 5 armored trains with artillery and machine-gun fire. In battles in the Kursavka district, the command of the Kommunist armored train especially distinguished itself. The village of Vorovskol'skaya, attacked by the Kochubey cavalry, passed from hand to hand several times. 1-I Caucasian Cossack Division Shkuro, which was advancing from the left, then from the right side of the railway to Kursavka, tried to get to the rear of Kochubey's brigade. But the white cavalry was repeatedly thrown off by the red infantry. Only by December 16 did the whites reach the site north of Kursavka, and they took its 27 th attack from the raids with the support of armored trains and the advance of Shkuro's cavalry to the rear in red.

Against Denikinians, who were attacking from the direction of Batalpashinsk to the Kislovodsk-Pyatigorsk region, were being defended by part of the Kislovodsk military sector, headed by Kozlov. 14 - December 15 white cavalry suddenly attacked Kislovodsk, but was repelled. The enemy retreated to Batalpashinsk. Until December 17, whites continued their attacks, but without much success.

In the Stavropol direction, the 1 Army Corps of Kazanovich began an offensive on the Aleksandrovskoye-Donskaya Balka sector. December 15 Denikinians captured the village of Dry Buffalo, Vysotsky, Kalinovskoe. Red - 3-I Tamansky rifle and cavalry divisions, put up stubborn resistance. But they were crowded and December 22 volunteers seized the large villages of Aleksandrovskoye and Kruglolesskoye. White could not break through.

The main blow was delivered by Wrangel's cavalry corps. The main forces of the corps were advancing on the Wine-making, Derbetovskoe, and the Stankevich detachment on the Divnoye. By December 14, the Wrangel had broken through the defenses of the 4 rifle and 1 th cavalry divisions (formerly the Stavropol Corps). White captured the area Petrovskoe - Winery. Wrangel, confident of the defeat of the Reds and of the fact that they did not pose a threat in the near future, surrendered his command I settle down and drove off to Ekaterinodar. However, December 18 counterattacked the Reds, discarded the Stankevich detachment, captured Derbetovskoye and Vinodelnaya. To help the squad Stankevich was thrown 2-I Kuban division Ulagay. White whacked on the flank of the opponent and threw the Reds to Divnoye. 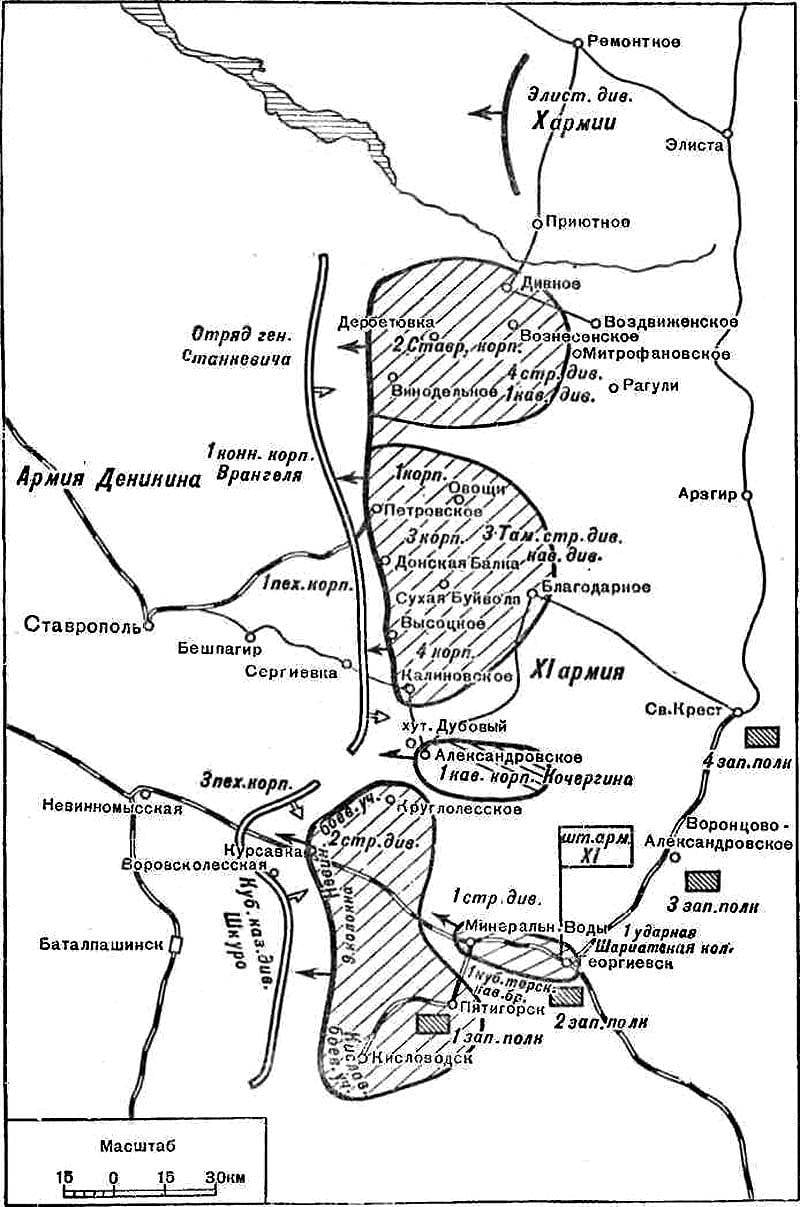 The fighting continued until December 22 1918, but the White Guards could not break the resistance of the Reds and suffered serious losses defended. A feature of these battles was their winter character - in conditions of ice, blizzards and frost. Both sides tried to occupy large settlements in order to find a warm hearth, lodging for fighters, food and fodder. There were no permanent defensive lines. The only exception was the Kursavka area, where near the Vladikavkaz railway the red infantry prepared permanent positions.

18 December 1918, the Caspian-Caucasian front again gave the order to attack Ekaterinodar - Novorossiysk, Petrovsk, Temir-Khan-Shura (now Buynaksk) and Derbent. However, 11-I army did not have ammunition for the offensive, stocks were depleted. So, on the operating weapon was only on 10 shells troops and 10 in arsenals. The units had 10 - 20 cartridges for a rifle, and the army reserve did not even provide one cartridge for one rifle. And ammunition coming from Astrakhan could arrive only at the end of December 1918 of the year - the beginning of January of 1919. Therefore, the attack of the 11 Army was postponed to the end of December 1918.

How the British created the Armed Forces of the South of Russia
How to restore Soviet power in Ukraine
How Petliurists led Little Russia to a complete catastrophe
How defeated Petliurism
Give the boundaries of 1772 of the year!
Battle for the North Caucasus. How to suppress the Terek Uprising