Uprising on the battleship "Potemkin"

14 2012 June
36
June 14, 1905 on the newest ship of the Russian Imperial fleet the squadron battleship "Prince Potemkin - Tauride" rebellion broke out.

The all-Russian armed uprising that the RSDLP was preparing for was to begin in the fall of 1905. Preparing for it under the leadership of the Bolsheviks and the sailors of the Black Sea Fleet. However, on the battleship Potemkin a spontaneous rebellion began much earlier. 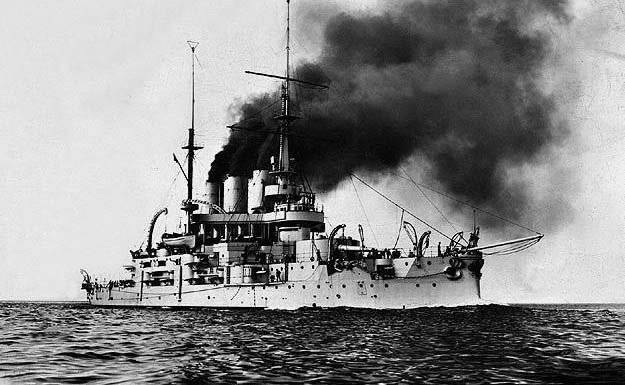 The battleship was on the roadstead, the team tested the guns and was engaged in the provision of shooting. The cause of the uprising served as a fatal incident. On June 14 the sailors of the armadillo refused to have dinner, resenting about the spoiled meat. The command of the ship tried to stop a riot on the vine, but the sailors quickly disarmed the officers. During the shooting that broke out, several people from the battleship command were killed, including the captain of the ship. The rest of the officers were taken hostage.

The Bolshevik G. N. Vakulenchuk took over the leadership of the insurgent sailors. But during the shooting he was mortally wounded, and another member of the RSDLP, AN N. Matyushenko, stood at the head of the revolutionary uprising.

After the battleship was captured, the sailors chose their commanders, the ship's commission, determined the rules of protection. weapons, the ship and those arrested. Destroyer team number 267 also raised the revolutionary red flag of the uprising. 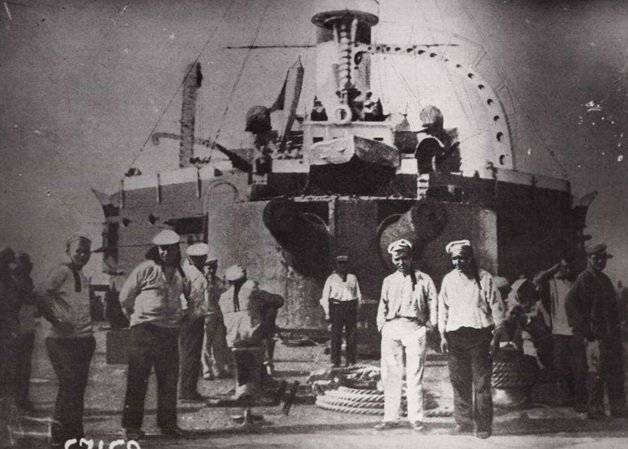 The emperor rightly considered the uprising on “Potemkin” a very dangerous signal. The commander of the Black Sea Flotilla, Vice-Admiral Chukhnin, was ordered to immediately suppress the uprising by any means, up to flooding the battleship, along with the team that violated the sacred military oath.

17 June squadron, consisting of the battleships "St. George", "Three Saints", "The Twelve Apostles" and the mine cruiser "Kazarsky", went to sea to pacify the rebels. However, the first meeting of the revolutionary ship with government courts ended in an unexpected victory for the Potemkin. On the morning of June 18, a rebellious battleship stood on the outer roadstead of Odessa. A squadron of 11 ships approached him: six destroyers and five battleships. She was commanded by senior flagship Vice Admiral Krieger. The rebels, going out to sea towards the government ships, did not plan to open fire first. The sailors believed that the crews of these ships would decide to join the uprising. Daring Potemkin refused to negotiate with the fleet commander and went to the ram "Rostislav" - the flagship of Krieger. At the last moment, the rebels changed course and marched between Rostislav and the battleship of Rear Admiral Vishnevetsky Three Saints, cutting through the squadron system and holding the admiral ships under the guns of their guns. And the squadron teams refused to shoot at the rebels and greeted the Potemkin team with shouts of “Hurray!”, Despite the bans of the commanders. 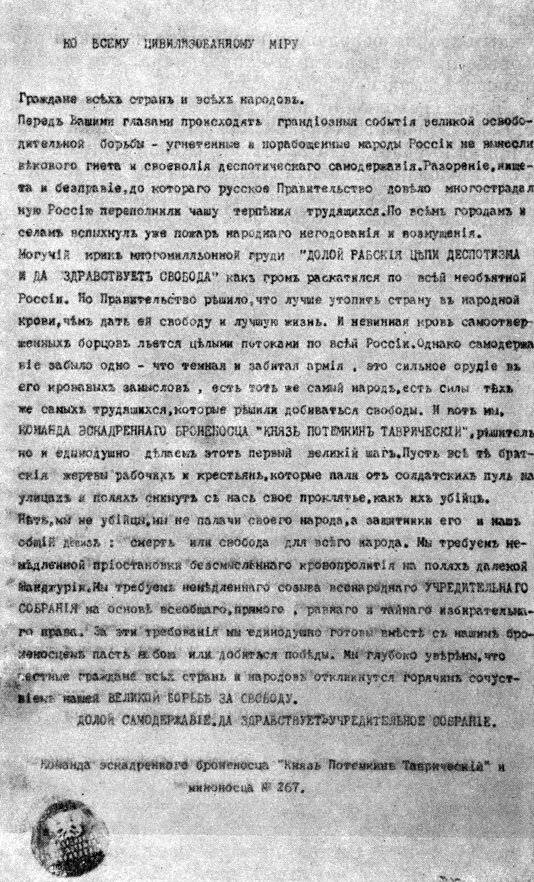 Appeal to the commands of the battleship Potemkin and the destroyer No. 267 - "To the entire civilized world"

Feeling the mood of the crews of the ships, Krieger at high speed led the squadron into the open sea. However, the battleship George the Victorious did not follow the admiral's ships: his team talked with the Potemkins and supported them, putting their officers under arrest. But later among the rebels on the "Pobedonosets" there was a split, and he surrendered to the authorities.

After this meeting with the command of the fleet, the Potemkin returned to Odessa, but could not get water and provisions there. The team decided to go to Romania. The battleship and the accompanying destroyer No. 267 came to Constanza on June 19, but the local authorities also did not give the rebels any fuel, food or water. Before leaving the Romanian waters to Feodosiya sailors - revolutionaries published appeals in newspapers under the headings “To the whole civilized world” and “To all European powers”. In them they tried to explain the causes and goals of their rebellion.

The position on the battleship has become critical. The boilers had to be fed with outboard water, which destroyed them. "Potemkin" came to Feodosia in the early morning of June 22, but gendarmes and regular troops were already waiting for the rebels. The rioters decided to return to Romania. 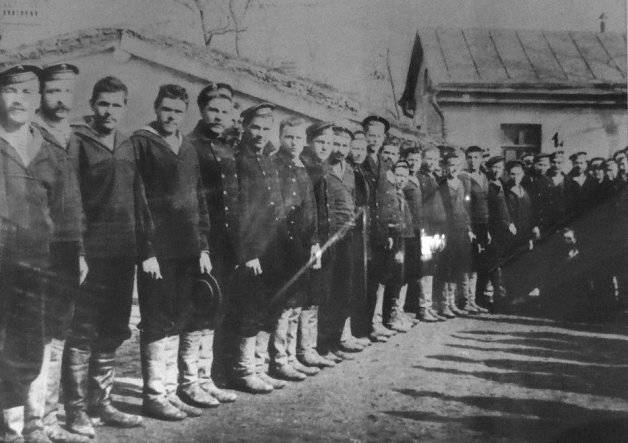 Arrested sailors - participants in the uprising on the battleship "Potemkin"

Arriving in Constanza on June 24, the rioters considered it an honor to hand over their ship to the Romanian authorities. The next day they lowered the red flag and went ashore as political emigrants.

The ships of the Black Sea Fleet arrived on the Romanian coast 26 of June in order to return to Russia the Romanian squadron battleship Prince Potemkin - Tavrichesky the next day.

After the October coup "Potemkin" became known as "Fighter for Freedom". The rebellious ship awaited an unenviable fate. In 1918, he was captured by the troops of the Kaiser, and later joined the army of General Denikin. When the Red Army was preparing to storm the Crimea, the ship, which became the first symbol of the Russian distemper, blew the Anglo-French invaders leaving Sevastopol. 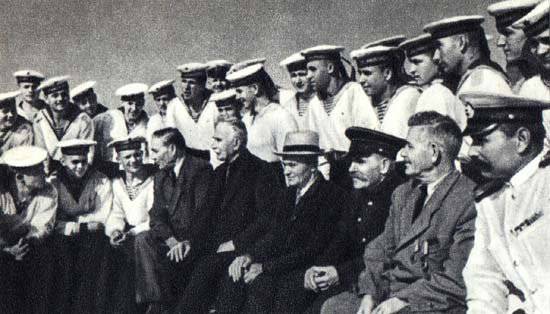 Participants in the uprising on the battleship Potemkin, the Prut training ship and the battleship George the Victorious. From left to right: I.A. Lychev, I.P. 60th, M.P. Panfilov, A.I. Swan, A.F. Tsarev (1955, Sevastopol)