Knights and chivalry of three centuries. Knighthood and knights of England and Wales. Part of 2

February 9 2019
17
“There is something about which they say:“ look, this is new ”;
but it was already in the centuries that were before us. ”

About military stories ancient as well as medieval England can be briefly said as follows: it was woven from a thousand sorrows. Whoever landed on its green shores, who only conquered it! First, the indigenous inhabitants of the island (except for the Scots and Picts who lived in the north) were conquered by the Romans. Then the Romans left, and the Anglo-Saxon conquest of Britain began, in which utes and friezes also took part, which lasted 180 years and ended only at the beginning of the 7th century. However, from VI to IX century there were also internecine "wars of the seven kingdoms", and by 1016, all of England was conquered by the Vikings. 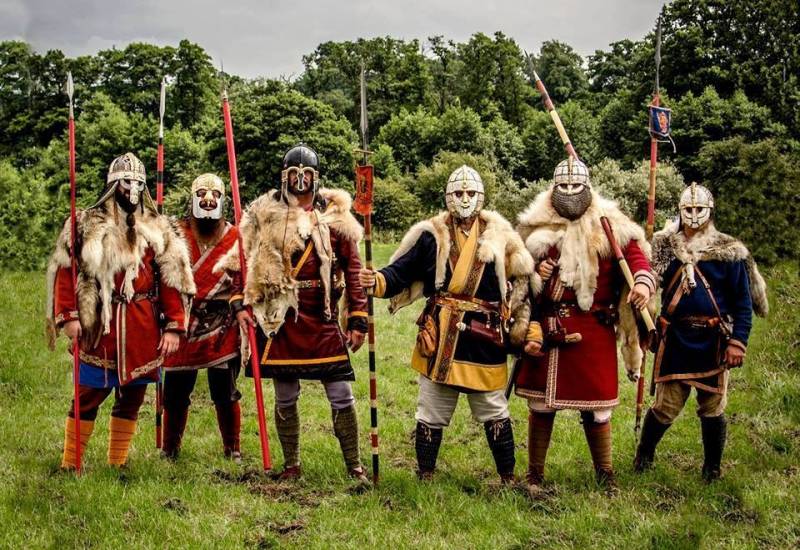 Perhaps this is what the Saxon warriors looked like before the Norman conquest of Britain. Modern reconstruction.

50 years passed, and in 1066, the Normans, led by Guillaume Bastard, descended from the very same Viking king of Rollon, landed there. All of these events have caused profound military, social and cultural changes in England, although the degree of continuity between the Anglo-Saxon and Anglo-Norman military institutions remains the subject of discussion. However, it is obvious that Wales retained its originality until the Anglo-Norman conquest of the country. 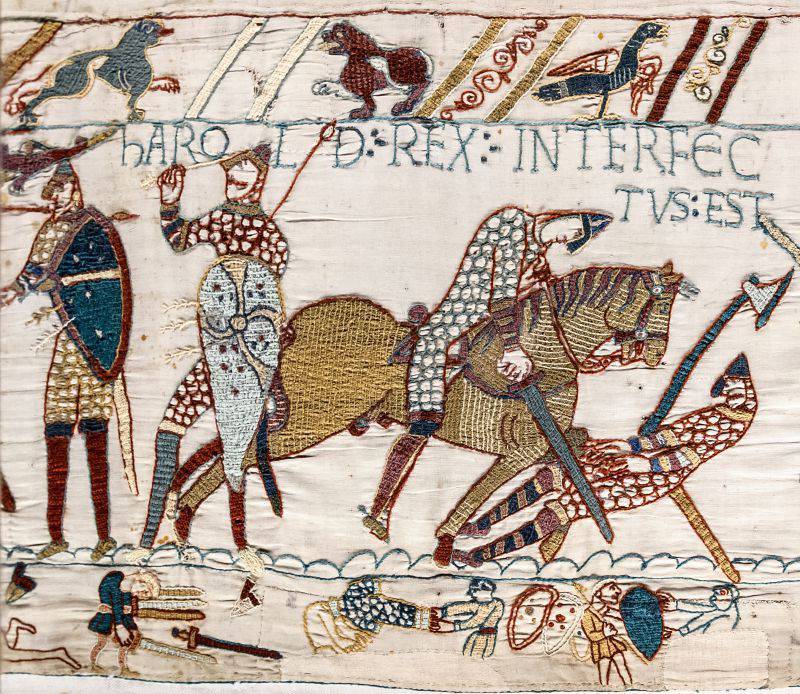 Although the helmets of the ancient Angles and Saxons had masks and took them, the warriors of King Harold and even Harold himself had the simplest helmet with a pouch and paid for it. During the battle of Hastings, he was struck by an arrow in the eye. The inscription embroidered over his head reads: "Harold-King is killed here." 57 scene (excerpt). Photos of embroidery from the “Carpet Museum”, Bayeux, France). 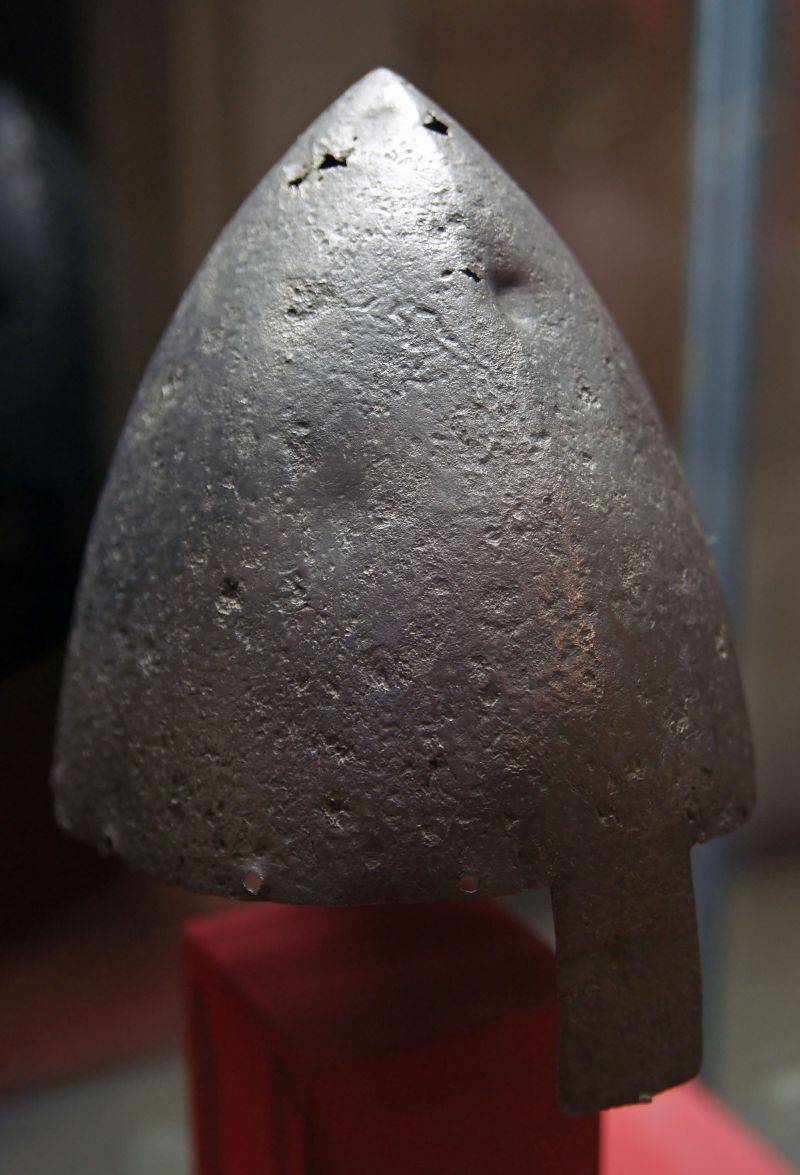 Such helmets were on the head of the soldiers at the Battle of Hastings. (Around the XI century. Found in Moravia in the town of Olomuc in 1864 (Kunsthistorisches Museum, Vienna)

Interestingly, the Anglo-Saxon military formations of the mid-11th century were very different from the early Saxon ones. Ironically, on the battlefield of Hastings met the "British", who were more Norman than the Normans themselves, the descendants of ... the Normans. The fact is that the majority of the country's population was largely demilitarized, while the kings used mercenaries widely, so we can say that the concept of "chivalry" already appeared in England, that is, there were professional soldiers who were paid for from the treasury. 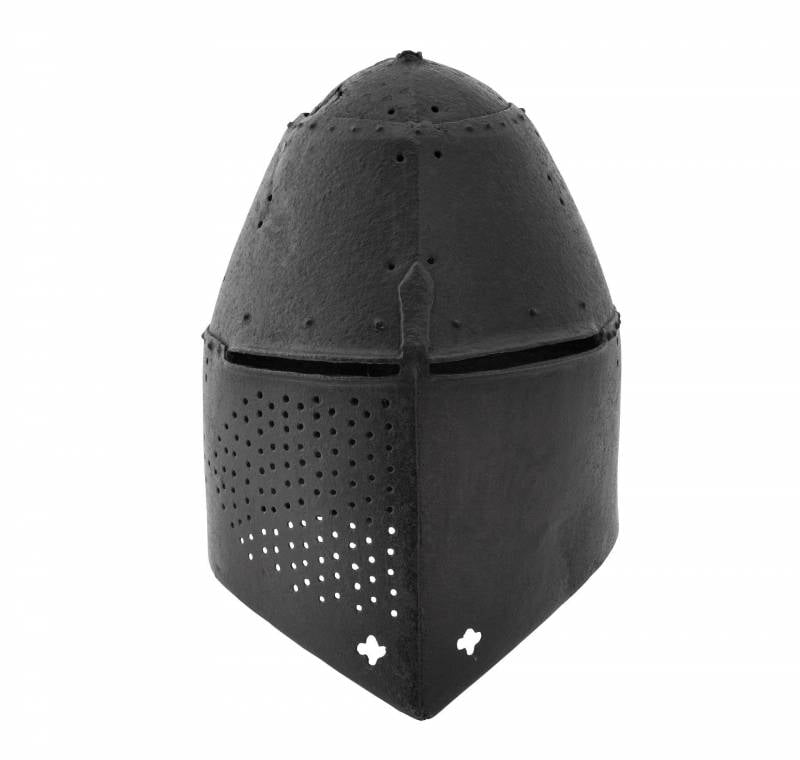 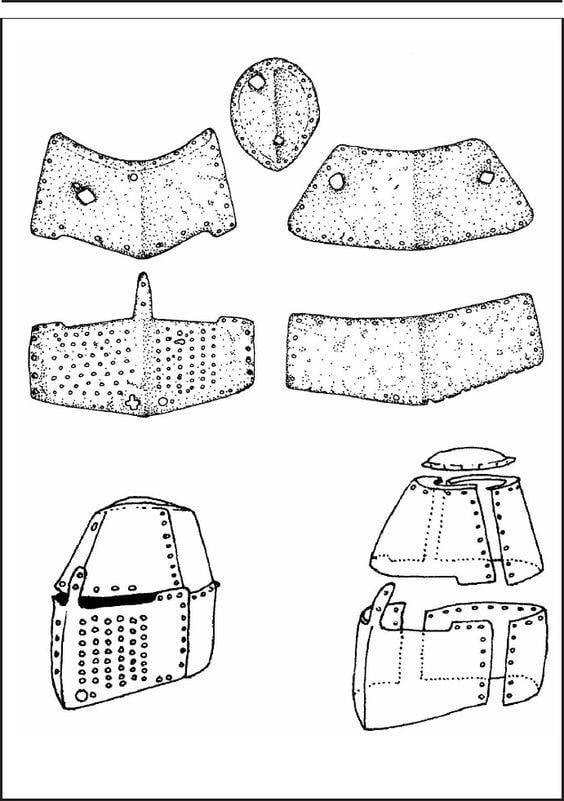 Diagram of the device "big helmet" from the castle Dalechyn in the edge of Vysocina (Czech Republic).

At the same time, battle tactics continued within the framework of the Nordic or Scandinavian tradition, which emphasized the role of infantry, and not cavalry. One of the hottest controversial issues in the study of the medieval war is whether Anglo-Saxon warriors fought on horseback. It is possible that the most typical Anglo-Saxon warrior of that time was a mobile equestrian infantryman, who rode on horseback, but then dismounted for battle. In Anglo-Saxon Britain of the XI century, there was a special royal guard of the Khuskerl (the term is of Scandinavian origin and initially meant something like a domestic servant, just like the first samurai in Japan), created in England during the reign of King Knuth the Great and its conquest by the Danes. Up to the Norman Conquest, the Khuskerla was the main fighting force of the Anglo-Saxon kings, that is, it was their royal squad. During the reign of King Edward, they were also actively used to carry out garrison service as a "national guard" supporting order in the kingdom. Of course, with their armaments and combat experience, the squadrons of the Khuskerl were superior to the traditional Anglo-Saxon militia of the Fyrdas and the troops of the tens, small and medium-sized landowners, but their numbers were generally small. Therefore, in those cases where large-scale hostilities were planned, a fyrd was also necessarily convened.

Robert Berkeley Effigia 1170 from the Cathedral in Bristol. This is one of the earliest British efigiyy, showing there the complete knightly equipment of the time - a chainmail hauberg with a hood and surcoat cashier clothes.

Anglo-Saxon tactics prescribed to begin battles with throwing weapons. In the course went like spears, axes, and also, judging by the "embroidery from Bayeux", also maces, which also threw at the enemy. Of course, there should have been an archery. However, the Anglo-Saxon archers for some reason are absent.

The effigia of Geoffrey de Mandeville First Count of Essex, who died in 1144, although she herself is older and refers to the NUMX year. Temple Church, London. Differs cylindrical helmet (helmet-pan ") with a chin, known for the miniature of the end of the XII century. depicting the scene of the murder of Thomas Becket. (British Library, London).

Between the 1066 and 1100 years, the Anglo-Saxons still continued to play an important role in the Anglo-Norman army after the conquest, but they very quickly adopted the tactics and armament of their conquerors and in general became similar to the soldiers of north-eastern France and Flanders. Fird now no longer played a role. So the military history of the Anglo-Normans was militarily very similar to the history of other European nations of this period. However, there were differences.

The famous effect of William Longspe, 1226 Propulsion Cathedral in Salisbury. One of the first effigy with the image of the coat of arms on the shield. The upper part of the shield, which was rounded off on older shields, is also clearly visible.

Thus, even under Henry II, England was not oriented toward war, like many of its neighbors, or at least it could not be described as "militarized feudal society." Mercenaries, both local and foreign, increasingly took on the brunt of the hostilities, most of which lasted for a long time, but also occurred outside of England. It is clear that the value of ordinary people in the war at the same time fell heavily, but still remained a legal obligation, which later could be renewed. Already in the XII century, her famous archers appeared in England, and in the XIIIth free peasants, of whom there were quite a few in England, they were simply obliged to learn to master the “great English bow”. For shooters there were competitions well described in popular ballads about Robin Hood. Most of the shooters came from the northern districts or Kent, Sussex and other forest regions. Crossbows at first became conventional weapons, although they were used mainly in the king’s army because they were too expensive for the peasants. However, over time in England, his popularity fell markedly, and this is very different from other European countries.

John de Valkungham, mind. 1284 St. Felixskerk Church in Felixskerk (north of York). The size of the shield has decreased even more, the knees are protected by convex kneecaps. Below the chain mail you can see vertically quilted gambizon.

Speaking about the military equipment of the knightly cavalry of the British after 1066, it should be noted that it was changing towards increasing its effectiveness. The chain mail armor began to protect practically the entire rider’s body, not only among the kings, but also among the rank-and-file warriors, and the tips of the spears became narrower and more penetrating. This process took place in the XII and the beginning of the XIII century, while the invoice "armor", as well as from the "boiled skin" and iron began to appear in the second half of the XIII century. The professionalism of the cavalry elite was followed by a comparable professionalization of the infantry, and even the earlier modest archer. 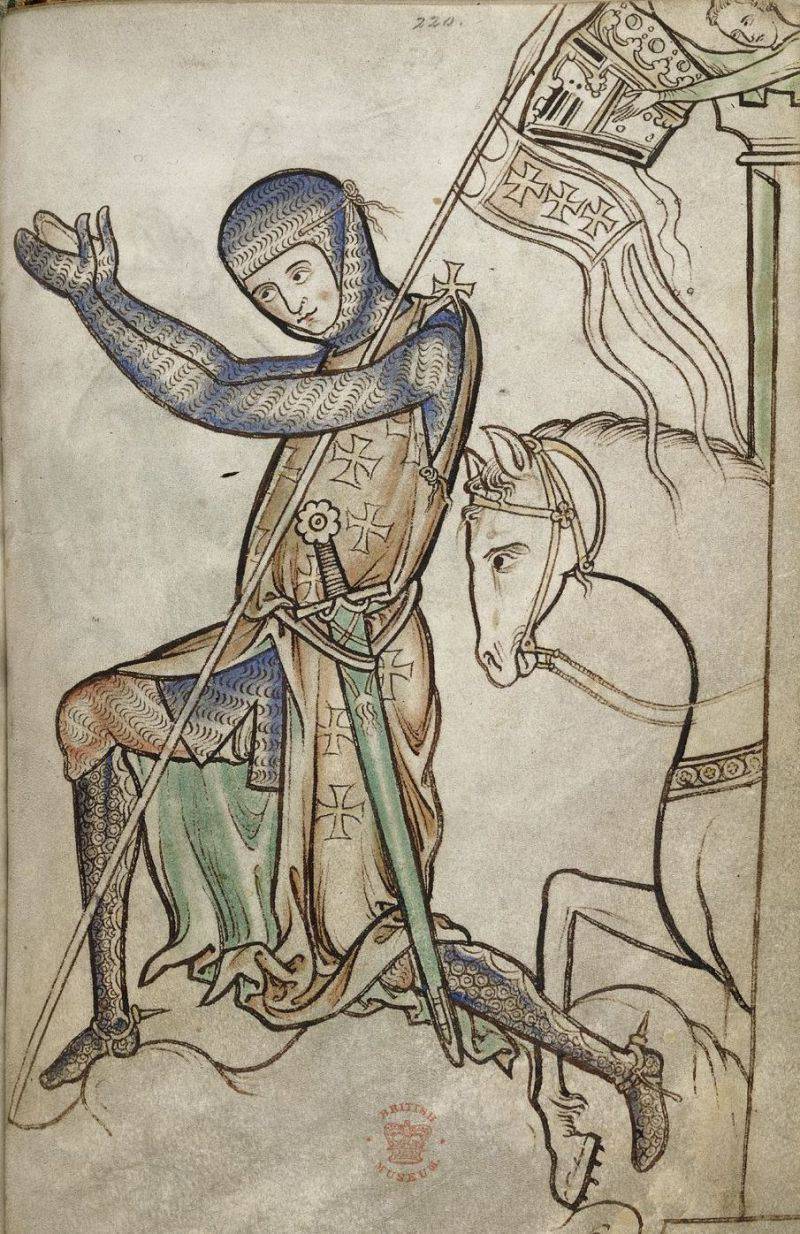 The Praying Crusader is a miniature from the Winchester Psalter. Second quarter of the 13th century It is shown in a typical for its time protective armament: a chain haberge with a hood and highways on the front part of the leg from metal disks. It is possible that the cross on the shoulder has a rigid base under it, well, let's say it could be a shoulder strap of a cuirass made of leather, which is covered by a surco. "Grand Slam" we have vertical slots for breathing and decorated with embossing. Unfortunately, to our time, such helmets have not survived and they are not in museums. (British Library, London).

John de Henbury, mind. 1303, but he did not have a knighthood before 1300. Nevertheless, the armor had and served knightly service. Buried in the Church of St. Velburha in Henbury.

And the most significant figure in the military history of Britain was precisely, although, of course, he was fighting far from the way the horse archers of the East fought. In the XIV century, during the years of the Hundred Years War, it was under the long arrows of the English peasant archers that the lush ranks of the French knightly cavalry mixed in, the answer to whose victories was their passion for handguns and artillery.

William Fitzralf, mind. 1323. Pembrash County Church. The brass tombstone is a bras, with carefully traced details of armor, including patch plates on the arms and on the legs.

In Wales, the development of military affairs followed a parallel but distinctive course, which for many centuries was characterized by a highly stratified society of warriors. Unlike the Welsh of the early Middle Ages of northern Britain, the Welsh of Wales did not have equestrian culture. Therefore, at the end of the XI and the beginning of the XII centuries, they had to learn the cavalry war from the Norman conquerors, and they achieved some success, although they developed mostly lightly armed cavalry. A large number of Welsh soldiers served in the English army of the XIII and XIV centuries as mercenaries, in turn directing the "modern" military influence back to Wales. It was the Welsh who delivered the first contingents of the archers to the English king Edward I with whom he made his campaigns against the Scots. 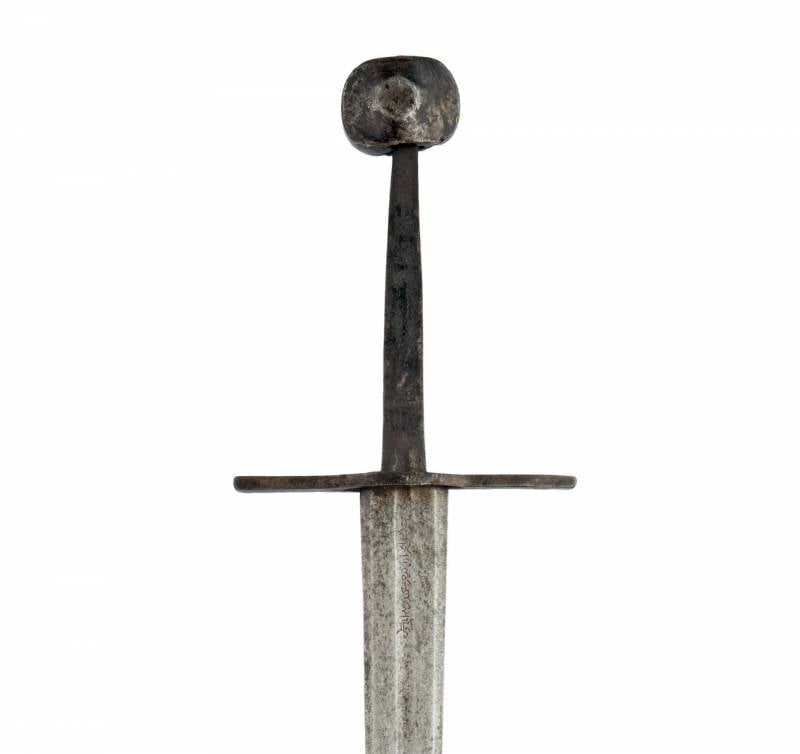 Another Celtic region of the British Isles, which had its military traditions, was Cornwall. There is evidence that the early forms of the Celtic military organization even survived the conquest of Cornwall by the Anglo-Saxon Wessex in the 814 year and persisted until the Norman conquest itself. Well, already in the years of the Hundred Years War, all the local military differences in England were almost completely mixed, except perhaps distant and proud Scotland.

John Leverik Effigy. Mind. 1350 Church in Asha. On his head is a helmet bascinet with plates on the rim. Instead of surcoat, there is a short Jupon on it, in the slots of which one can clearly see the shell of metal plates that overlap one another. That is, at that time armor made of solid-forged iron plates already existed, but they were not visible under the padded clothes!

Note that the British and their historians were very lucky in that despite the revolution and the civil war there, unlike neighboring France, no one specifically destroyed the monuments, although some of them were damaged as a result of the German aviation during the Second World War. Therefore, in English churches and cathedrals, many sculptural tombstones - effigies - have been preserved, which allow us to examine in detail the weapons and armor of soldiers of one time or another, starting from the very moment the fashion for these sculptures appeared. Unfortunately, due to the specifics of their position, it is almost impossible to examine them from the back, the work of the sculptors themselves is not always of equal quality, however, as a historical monument, these sculptures are almost priceless.

Author:
Vyacheslav Shpakovsky
Articles from this series:
Knights and chivalry of three centuries. Knighthood and knights of northern France. Part of 1