Kolerov: “We must respect the choice of the peoples of the Baltic and Transcaucasia, even if it leads them to death” 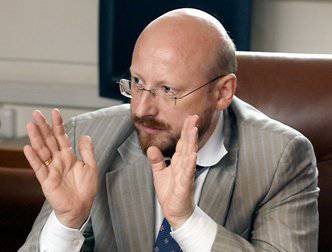 Standards of bilateral Russian-Latvian relations are set in Riga, not in Moscow, and this hinders the political dialogue between the countries, considers political analyst Modest Kolerov of the Russian Federation 1 class. "The Latvian ethnocracy is building a nation that is not built without an enemy image," he said, speaking at a meeting in Riga organized by the Baltic Forum. By the way, Kolerov predicts coming to power in Latvia of the radical-nationalist party “All - Latvia!”, Read the premiership of the leader of this party Raivis Dzintars and, accordingly, the deterioration of Russian-Latvian relations, a REGNUM correspondent informs.


The meeting with Modest Kolerov and Deputy Editor-in-Chief of the REGNUM news agency Igor Pavlovsky was held in the conference hall of the Avalon hotel. A collection of articles "The pulsation of empires" published in Riga was presented to its participants. It contains fresh articles by Kolerov. Having told about stories the cooperation of the Baltic Forum with Kolerov and the publication of the collection; the Executive Director of the Baltic Forum, Alexander Vasilyev, gave the floor to the Moscow guest.

Kolerov himself introduced himself as a representative of the right-liberal part of the Russian political spectrum, which, according to him, is becoming more and more close to the Franco-German model of the welfare state, which has experienced its imperial fall, but is not capable or daring to experience itself. “We are not soldiers of power. We are soldiers of the state,” said Kolerov. According to him, a number of historical laws operate in the Eurasian space. "I am a professional historian, but only after 25 years of my activity I began to recognize what I had challenged before - the geopolitical and geo-economic framework of the existence of states. No one ever guaranteed to any survival society. The historical path is littered with skeletons of civilizations. That we are alive is not it means that we will win. No one is immune from defeat, which may be the result of political mistakes of politicians, blindness of society, genocide, "said Kolerov.

Kolerov described his vision of the current moment as follows: "We are the last Romans who are moving through the ruins of the empire." Therefore, his statement was sounded strange and contradictory to such a pessimistic introduction: "Of course, we will survive and win." Russia has to fight, according to Kolerov, not with an external enemy - the struggle goes with itself: "We remember that the main reason for our defeats is not the notorious Washington Regional Committee, but the betrayal of our own political elite and the stupidity of our own intelligentsia."

In turn, the main western neighbor of Russia - the European Union - Kolerov called the new empire, doomed to collapse. The European Union is an incarnate example of double standards, an example of the connection of multi-level and heterogeneous civilizations. "If the EU uses on its eastern fringes as weapons affirmation of "European values" nationalism, apartheid and pro-Hitler revisionism, this is evidence that the European Union is an empire entering the final stage of its economic and political crisis, "he explained. According to Kolerov, this contradictory combination of tolerance and apartheid is a weapon - nationalism, apartheid and pro-Hitler revisionism - implies the attitude towards the EU’s eastern neighbors as “barbarians.” But the main challenge to the European Union, according to Kolerov, is an internal challenge - the Islamization of Europe approaching demographic catastrophe of old Europe.

According to him, this process is a serious source of threat to Russia: "If the EU collapses quickly, Russia will be very difficult. We do not need the EU to collapse quickly. The longer the damping empire - the European Union - decays, the easier Russia will be."

Kolerov doesn’t have faith in the fact that the European Union will cope with economic difficulties: "The EU will not survive economically. It will dump bad assets in the form of entire countries." Commenting on Latvia’s aspirations to enter the eurozone by all means, Kolerov said: “There is a special pleasure to jump into the last car of the train falling into the abyss. But [Latvian Prime Minister Valdis] Dombrovskis does this, for aesthetic reasons and calculations to pursue a career in Brussels. "

Kolerov conducted the geopolitical borders of modern Russia along the western border of Belarus, which historically separates it from Poland and along the southern and eastern borders of Kazakhstan (“the internal border between Kazakhstan and Russia does not exist”) separating Russia from “global Afghanistan” and China. This is the source of Moscow’s efforts to create a Eurasian Customs Union, which, according to Kolerov, serves as a limit to the desires and possibilities of Russia. Ukraine cannot be part of the Customs Union due to its internal division, Kolerov believes. Such as it was made by Stalin and Khrushchev, Ukraine is not viable, he argues. “God forbid, it will begin to break up, and an unprofitable, energy-intensive and inefficient Donbass will fall on our shoulders!”, Kolerov stressed Russia's disinterest in splitting Ukraine de facto.

“Russia doesn’t need anything else (except Belarus and Kazakhstan - REGNUM) from the periphery of the former Soviet empire, and it is deadly for it,” Kolerov confirmed once again that Russia doesn’t have neo-imperial claims, which they do not get tired of accusing in the capitals of the Baltic states.

A wave of protests in Russia around parliamentary and presidential elections Kolerov was silent about. However, the very first question that was raised after his introduction was related to recent political upheavals in Russia of the last time. However, Kolerov does not consider anti-Putin speeches in Moscow and St. Petersburg to be a serious movement, although he believes that this phenomenon has deep roots in the history of Russia: "All three distempers in Russia had a middle layer as their base, which was not represented in power." Kolerov stressed, however, that Bolotnaya Square has no positive program, and drew attention to the fact that the movement, which he called the “glamorous revolution”, enjoys deeply echeloned media and technical support within the government and from abroad. In another place, Kolerov said that the multimillion mass of private owners does not follow the "glamor opposition": the ruling elite in Russia is split, and society is consolidated, because it is multinational, and the multinational society is more protective of the inner world.

Counting damage "from the Soviet occupation," renewed by Lithuania, no matter how anecdotally it looked, Kolerov considers a big problem for Russia. In his opinion, this is done not at all from the desire to tease Moscow, but from the desire to "drink the same tea twice and even three times": make money, build a nation, and show yourself more Europeans than the Europeans themselves. On the question of whether the West is preparing a new Nuremberg, but now already over Russia, he replied in the affirmative: "Nuremberg is preparing for Russia over the West."

Answering the question of whether a referendum on granting Russian the status of the state language was noticed in Russia, Kolerov said: “The language referendum in Russia was noticed, but, unfortunately, was not supported by all available means. [...] The referendum on language is a local initiative, and they didn’t support him, because no one in Russia could warm up his hands on this. " According to him, for the Russian community of Latvia the referendum was the only reference way to declare their interests and the existence of the problem. "There is no other way. It will not be possible to circumvent the February 18 referendum results," he stressed. On another occasion, Kolerov said that Russians in Latvia, according to the “first EU standards,” have the right, at a minimum, to have a regional status for their language. According to him, the position of Russia on the issue of language and statelessness in Latvia would be more principled and more weighty if Russian business did not go to "insider transactions" with the Latvian political class. But Russian business is not patriotic, Kolerov complained, in the opinion of which Russia should support the Russian school and the press in Latvia with money on quite legal grounds. "Now this is done sluggishly, since it leaves less opportunity for theft," he added.

“Russia had no colonies in the literal sense of the word. On its head, it did not drain resources from the suburbs, but invested in them,” Kolerov noted, answering another question. According to him, the desire of South Ossetia to join the Russian Federation is the will of the people of South Ossetia, which Russia has to reckon with, even if from a political point of view Russia is unprofitable. In turn, he recognized the recognition of independence of South Ossetia and Abkhazia as the main achievement of the presidency of Dmitry Medvedev. As for the strategic alliance of Russia and China, China does not need allies and does not recognize them, it is self-sufficient, Kolerov said.

Responding to a question sent to him by a REGNUM correspondent by Igor Yurgens, director of the Russian Institute of Contemporary Development, why intensive economic and cultural ties between Latvia and Russia are not continued at the level of political dialogue, Kolerov said: "Jurgens is cunning. If everything depended only on him, then relations would be very good, even family relations. However, standards for Russian-Latvian bilateral relations are set here in Riga. Latvia is building a nation that is not built without an enemy image. So this survey to the local political elite, which, instead of a political dialogue builds the image of the enemy. "

In this connection, Kolerov’s forecast on the development of Russian-Latvian relations was as follows: “Given that Raivis Dzintars (“ All is Latvia! ”- TB / DNNL) will most likely be the next prime minister, relations between Latvia and Russia will not improve.” In response to the outrage of one of the journalists representing the Latvian media, on what basis Kolerov makes advertising a marginal policy (Dzintars - co-chairman of the VL-TB / DNNL association, which has eight seats in the 100-local parliament and is the third in terms of popularity by a political force in the country (IA REGNUM), he replied: "Let's see what you say when Dzintars takes 20% in the elections. I do not advertise to him. These are your children. You choose him because he is in the radio It expresses a certain general opinion, and until it (the opinion) reaches the wall, it will not be abandoned. "

When asked by REGNUM why, recognizing the existence of a geopolitical and geo-economic framework among states, he excludes the Baltic framework, which objectively is part of the economic system of the East European Plain, from such a framework of Russia, Kolerov answered: "Russia recognizes the national consensus in the Baltic and Transcaucasian countries. They we have made our choice. We must respect it. If we intervene, we will always lose and we will be guilty. People have made their choice and must go their way to the end. Even if it leads them to death. "

Ctrl Enter
Noticed oshЫbku Highlight text and press. Ctrl + Enter
We are
Modest Kolerov: Russia expects an explosion of three "K" - Kurdistan, Karabakh and KazanModest Kolerov: Talking about the exchange of Russian recognition of independence of South Ossetia - lies
49 comments
Information
Dear reader, to leave comments on the publication, you must to register.