January 24 2019
11
In early January, 2019 of the year, Russia planned to withdraw from orbit its military satellite Kosmos-2430, which was part of the Oko missile attack warning system (SPRN), the system operated from 1982. This was first reported to the North American Aerospace Defense Command (NORAD). After that, this event was one of the most discussed topics in the Russian media. This was facilitated by the fact that the satellite’s falling frames were broadcast on a television broadcast of a cricket match in New Zealand, and then spread around the world.

The Kosmos-2430 military satellite was put into orbit in 2007 and operated until 2012, after which it was removed from the orbital constellation of the Russian Federation, the representatives of the military department specified. This satellite was part of the satellite system for detecting launches of intercontinental ballistic missiles from the continental part of the United States - Oko (UC-KS) that operated from 1982 to 2014 for the year. This system was part of the space flight SPRN - missile attack warning system. This system included the first-generation US-K satellites in high-elliptical orbits and a US-CS in the geostationary orbit. The satellites located in the geostationary orbit had a significant advantage - such spacecraft did not change their position relative to the planet and could provide continuous support to the constellation of satellites in highly elliptical orbits. At the beginning of 2008, the group consisted of only three satellites, one 71X6 “Cosmos-2379” in geostationary orbit and two spacecraft 73Д6 “Cosmos-2422”, “Cosmos-2430” in high-elliptical orbits. 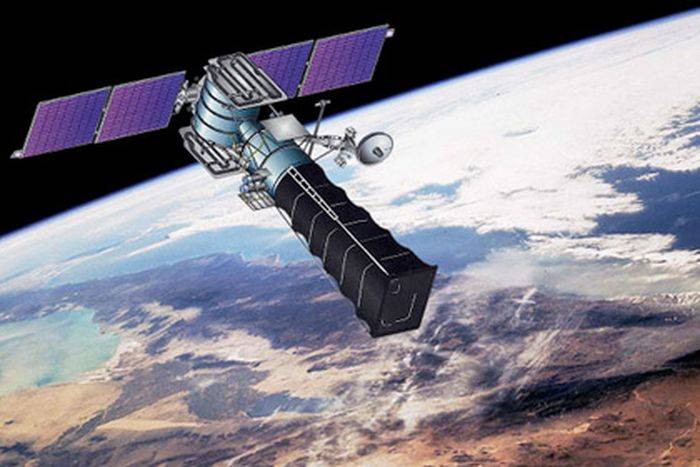 Since February 1991, the Oko-1 system from the second-generation 71X6 satellites located in geostationary orbit has been parallel deployed in our country. Satellites of the second generation 71X6 US-KMO (universal control system of the seas, oceans), in contrast to the first-generation satellites of the Oko system, also made it possible to record ballistic missile launches from submarines made from the sea surface. For this, the spacecraft received an infrared telescope with a mirror with a diameter of one meter and a solar protective screen measuring 4,5 meter. The complete constellation of satellites was supposed to include up to 7 satellites located in geostationary orbits and about 4 s satellites in high elliptical orbits. All satellites of this system had the ability to detect ballistic missile launches against the background of the earth’s surface and cloud cover.

The first spacecraft of the Oko-1 system was launched on February 14 of the year 1991. In total, the 8 US-KMO apparatuses were launched, thus, the satellite constellation was never deployed before the planned sizes. In 1996, the “Oko-1” system with US-KMO spacecraft in geostationary orbit was officially put into service. The system operated from 1996 to 2014 year. A distinctive feature of the second generation 71X6 US-KMO satellites was the use of vertical observation of the launch of ballistic missiles against the background of the earth's surface, which made it possible to record not only the fact of launching missiles, but also to determine the azimuth of their flight. The last satellite of the Oko-1 system of the Ministry of Defense of Russia lost 2014 in April, the satellite because of the arisen malfunctions, worked in orbit only two years from the planned 5-7 years of operation. After the last satellite was decommissioned, it turned out that the Russian Federation remained for about a year without any working satellites of the missile attack warning system until 2015 had launched the first satellite of the new Unified Space System (CEN), which was designated “Tundra”.

The Defense Ministry’s “Oko” system, which Russia inherited from Soviet times, was criticized as far back as 2005. General Oleg Gromov, who was the deputy commander of the space forces for armament at that time, ranked the geostationary satellites 71X6 and high-elliptical 73D6 to the category of “hopelessly outdated” spacecraft. The military had serious complaints about the Oko system. The whole thing was that even with the full deployment of the system, the 71X6 satellites were only able to detect the fact of launching a ballistic missile from the enemy’s territory, but could not determine the parameters of its ballistic trajectory, the newspaper wrote in 2014 year Kommersant 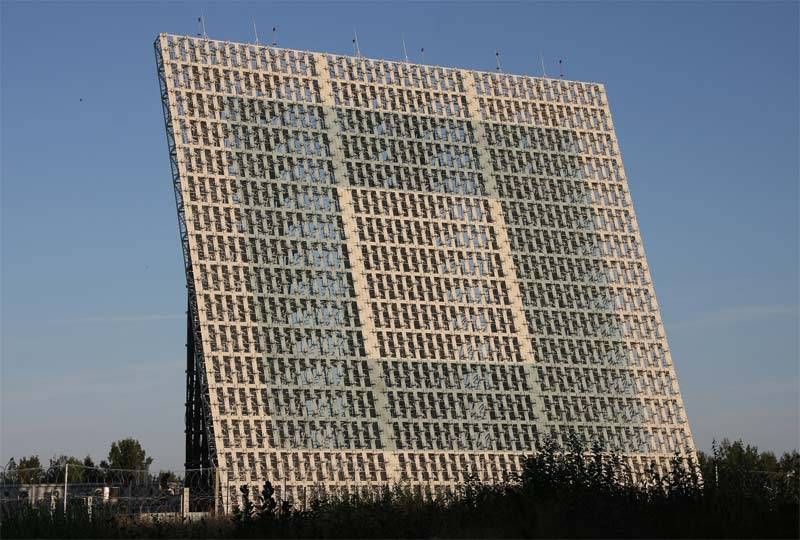 In other words, after a signal was issued to launch an enemy ballistic missile, ground-based radars were connected to work and until the ICBM was in their field of vision, it was impossible to track the flight of an enemy missile. New Tundra spacecraft (product 14Ф142) remove the indicated problem from the agenda. According to Kommersant, new Russian satellites can most likely indicate the area of ​​destruction not only ballistic, but also other types of enemy missiles, including those launched from submarines. At the same time on the Tundra spacecraft will be placed combat control system, so that, if necessary, a signal can be sent via the spacecraft to strike the enemy.

It is worth noting that the most famous case in the Soviet storieswhen a system error could trigger World War Three. 26 September 1983, the system issued a false missile attack warning. The alarm was recognized as a false decision by Lieutenant Colonel S.Ye. Petrov, who at that time was the operational duty officer at the Serpukhov-15 command center, located approximately 100 kilometers from Moscow. It was here that the TsKP was located - the Central Command Post of the US-KS Oko missile attack warning system, and from here also the control of the USS satellite was carried out.

In an interview with "Sight" Alexey Leonkov, a military expert and editor of the Arsenal of the Fatherland magazine, noted that the Oko system was once created to warn about the launch of intercontinental ballistic missiles from American territory, and during the Cold War, from Europe. The main function of the system was to fix the launches of ICBMs, to which the Russian Strategic Missile Forces were to respond. This system functioned within the framework of the retaliatory strike doctrine. Currently, a new system has been created in Russia, which has received the designation CEN. In September, 2014, Russian Defense Minister Sergei Shoigu stressed that the development of this system is "one of the key areas of development of the forces and means of nuclear deterrence." It is worth noting that the US is currently working on the same issue. The new American space system is called SBIRS (Space-Based Infrared System). It should replace the outdated DSP (Defense Support Program) system. It is known that in the composition of the American system at least four highly elliptical and six geostationary satellites should be deployed. 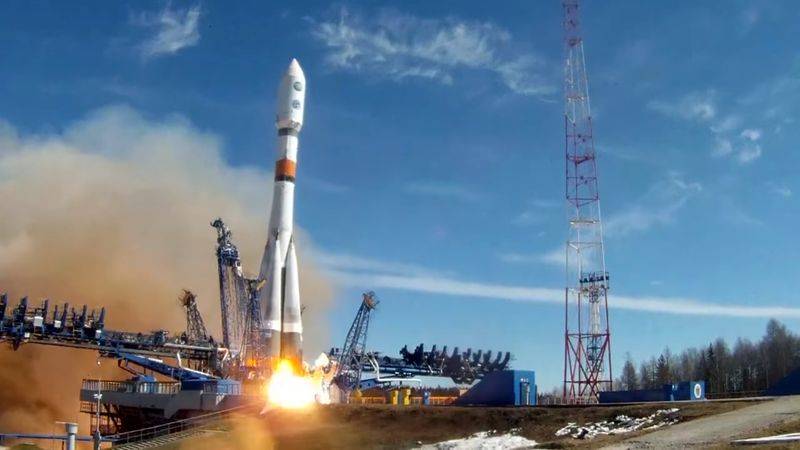 Launch of the second CEN “Tundra” satellite into the orbit of a Soyuz-2.1b rocket, shot from a video of the Russian Ministry of Defense

As Alexey Leonkov said in a conversation with journalists from the Vzglyad newspaper, the main feature of the new Russian Unified space system, which will consist of the Tundra spacecraft, is another doctrine. The system will operate on the doctrine of a retaliatory strike. New Russian satellites "Tundra" are able to track the launches of ballistic missiles from the earth and water surface. “In addition to the fact that new satellites track such launches, they also form an algorithm that allows you to determine exactly where the detected missiles can hit, and also form the necessary data for retaliation,” Leonkov said.

It is known that the first satellite of the CEN system was to be launched into orbit as early as the fourth quarter of 2014, but as a result, the launch was postponed and took place only at the end of 2015. In addition, it was previously planned that the system will be fully deployed by the 2020 year, when it includes 10 satellites. Later, these dates were shifted by at least 2022 year. According to information from open sources, currently only two satellites are in orbit - Cosmos-2510 (November 2015 of the year) and Cosmos-2518 (May of 2017), both satellites are in high-elliptical orbit. According to Russian military experts, the number of satellites put into orbit may be more than two, since the Russian Defense Ministry is reluctant to share information about which satellites are put into orbit.

According to TASS military observer, retired Colonel Viktor Litovkin, the missile attack warning system consists of several echelons. For example, on the perimeter of the country are ground stations for warning of a rocket attack. “There is a ground control system for outer space, there are optical systems, these three components together ensure the operation of the warning system,” Litovkin said in an interview to the newspaper Vzglyad. The TASS expert is confident that at present the MSSS system is fully operational.

According to Alexei Leonkov, the functions of a missile attack warning today are performed not only by spacecraft, but also by station-mounted radar detectors of the type Daryal, Dnepr and Voronezh. These stations and take the ICBM to escort. However, such over-the-horizon radars cannot be a full replacement for satellites, since they are able to detect targets only at a distance of about 3700 km (Voronezh-M and Voronezh-SM stations can detect targets at a distance of up to 6000 km). The maximum detection range is ensured only at very high altitudes, ”the expert noted. 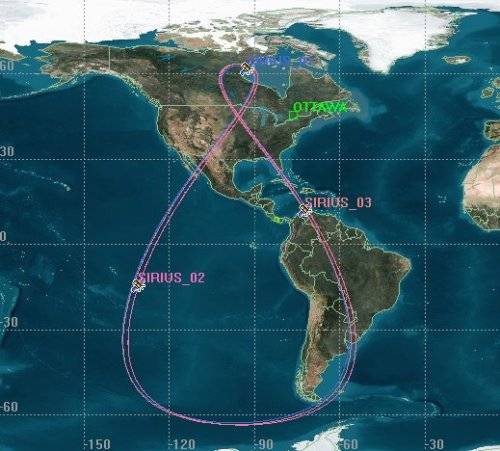 An example of the movement of the satellite in orbit "Tundra"

It is worth noting that information on modern satellites of the CEN Tundra system (14F112 product) is classified, so there is little information in the public domain about the new Russian system. It is known that the spacecraft of the Unified space system replaces the Oko and Oko-1 systems, the first launch of the new satellite took place on November 17 of the year 2015. Most likely, the name “Tundra” is derived from the name of the orbit to which the satellites are derived. The “Tundra” orbit is one of the types of high elliptical orbits with inclination of 63,4 ° and a period of revolution in sidereal days (this is less than solar days on 4 minutes). Satellites that are located in this orbit are in geosynchronous orbit, the path of such satellites most closely resembles the figure eight. It is known that the QZSS satellites of the navigation system of Japan and the Sirius XM Radio broadcasting satellites, which service North America, use the Tundra orbit.

It is known that the new Tundra satellites were developed with the participation of the Kometa Central Research Institute (payload module) and the Energia rocket and space corporation (platform development). Earlier, Kometa was already engaged in the development and design of a space early warning system for ICBMs of the first and second generation, as well as the space flight SPRN (Oko system). Also in the creation of the target equipment module of the Tundra spacecraft, engineers of the S.A. Lavochkin Scientific-Production Association took part, who developed the supporting structure elements (in particular, honeycomb panels with and without equipment, compartment frames), external and internal linkage (heat pipes, radiators, receivers, directional antennas, directional antennas), and also provided dynamic and strength calculations.

Unlike the satellites of the Oko-1 system, which could detect only the torch of a launching ballistic missile, and the determination of its trajectory was transmitted to the ground services of the early warning missile system, which significantly increased the time required for collecting information, the new Tundra system can determine the parameters of the ballistic the trajectory of the detected missiles and the likely areas of their destruction. An important difference is the presence of the combat control system onboard the spacecraft, which allows you to send a signal through the satellites to strike back at the enemy. It is reported that the management of the Tundra satellites, as well as the satellites of the two previous systems, is carried out from the Central command station of the EWS, located in Serpukhov-15.

We are in Yandex Zen
Russia’s own orbital station will not acquire in the near future
Extraterrestrial Form of Death
11 comments
Information
Dear reader, to leave comments on the publication, you must to register.