In Tunisia, a special operation on the destruction of jihadist cells

January 5 2019
7
More detailed data was obtained on the conduct of 3 on January 2019 by the Tunisian anti-terrorist special forces operation against the discovered jihadist base in the city of Jilma (Sidi Bouzid province). This city is located south of the capital. 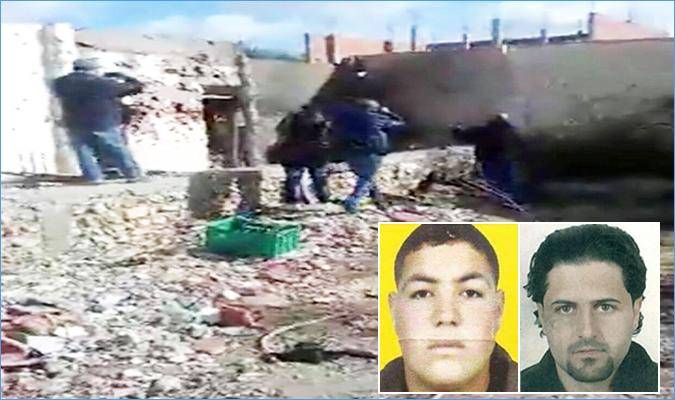 According to According to the Tunisian Arabic-language edition of Al-Sabah and other sources, in December last year in this rather troubled town (recall that it was there that the Tunisian "Arab Spring" began in 2011) was identified a group of radical Islamists, which was observed. Security forces found that the jihadists in the cell were actively acquiring weapons and explosives in order to prepare for terrorist attacks against government forces and foreign tourists.

The core of a group of Islamic extremists was 3 man and a few others were "sympathetic radicals." The Antiterrorist Department of the Ministry of Internal Affairs of Tunisia, without delay setting the solution to the problem, ordered to seize the house in which the extremists were housed.

After waiting for the moment when only those who formed the core of the terrorist cell would be in the building, the assault was launched, however, apparently, it was not possible to achieve surprise. There was a battle between the special forces and the jihadists, which lasted more than 1,5 hours, and as a result of which the seriously wounded terrorists made a suicide bombing at intervals of 20 seconds.

Officially reported about the injury of one of the security services, but, according to eyewitnesses of what happened, the loss of the antiterrorist group is actually greater.

The leader of the jihadist cell, Izz ad-Din al-Alawi (27 years), was previously known for his extreme views and that he was suspected of killing an 2 man, but could not be arrested. He was also known for being originally, in 2012-2013's. joined the Islamist organization “Jund al-Khilafa” (“Military Caliphate Militia”), which operated in a mountainous area at the Kasserin Pass. Then al-Alawi moved to the Islamist terrorist movement "Tawhid and Jihad", which also operated in Tunisia.

Later, according to some reports, in 2014-2017. he left for Syria to fight on the side of the “Islamic State” (a terrorist organization banned in the Russian Federation), and in 2018 he returned to Tunisia. True, he returned not in the usual way, not through the main aviation and the sea harbors of the north of the country, and from the south, using the routes of smugglers, while visiting jihadist structures in West Africa.

Returning to Tunisia, al-Alawi actively began to create a network of movement cells under the name "Tawhid and Jihad", acting as a representative of the "IG" * in Tunisia. According to the Tunisian security officials, the extremists planned to create “permanent jihad territory” in the desert provinces of the center and south of Tunisia, similar to areas still controlled by jihadists in the deserts of Egypt and Syria.

However, such plans were stopped in time. Even during the December 5 special operation, many of his supporters, mainly in the province of Sidi Bouzid, were arrested. And on January 2018, 3 of the year, besides the destruction of the two most active militants, were arrested by sympathizers of terrorist cells in the cities of Gilme and Sidi Bouzid. But the third jihadist from among those who made up the core of the terrorist group managed to escape for the time being; the search operation is still ongoing.

Recall that, according to international organizations, in recent years at least 3000 Tunisian citizens left for Libya, Algeria, Iraq and Syria, where they became militants of various Islamist groups, primarily IG *. Back to Tunisia, there is also a significant stream of jihadists, returning for one reason or another, mainly through the easily accessible borders of neighboring Libya and Algeria, as well as through the trans-Saharan routes from the states of West Africa. This means that the Tunisian special services will not remain without work in the near future, but our citizens should probably think several times before choosing this country for recreation.