Almost continuous wars led to the fact that the Russian economy was heavily militarized. In 1799-1803 in the Russian Empire there were 190 large mining enterprises, among which were the largest factories in the world. Russian metallurgy was the first in the world in the production of iron and iron. She gave more than a third of his world production. Russia in the field of metallurgy ahead of Britain, France and other European countries. In 1803, the Russian Empire produced 163,4 thousand tons of pig iron, England - 156 thousand tons, France - 80-85 thousand tons. Two thirds of the pig iron went to meet domestic needs. In copper production, Russia ranked second with 2,8 thousand tons, behind England - 5,9 thousand tons. France occupied one of the last places in the production of this metal.

Artillery guns and ammunition. In the arsenal of the Russian artillery at the beginning of the XIX century were smooth-bore guns. The reduction in the number of calibers and the improvement of artillery systems, which began in the 1791 year, was completed in the 1805 year. The activities of the Military Commission during the 1802-1805 period played a major role in this process. The number of calibers of the guns was established and the best artillery systems were left in service. The field army remained: 3-pound cannon, 6-pound cannon of small proportion, 12-pound cannon of small proportion, 12-pound cannon of medium proportion, quarter-feed unicorn, half-unicorn. The siege artillery was armed with 18- and 24-pound cannons, single-pole unicorns and five-ship mortars. The production of artillery and ammunition was concentrated in the factories of the northwest, the center and the Urals. The guns were cast iron and copper. At the end of 18 - the beginning of 19 for centuries, there were attempts to establish the production of "iron-steel artillery". It was noted that it has a number of advantages - it is lighter, stronger, trouble-free and, most importantly, doubles the distance of the shot. However, to establish mass production failed. 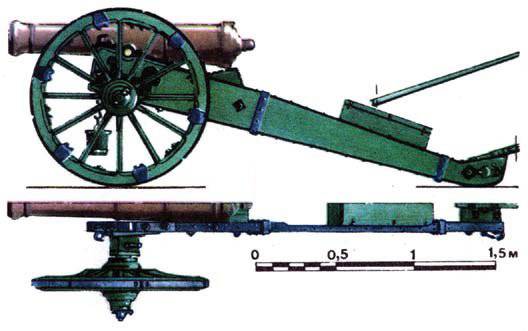 In the north-west of the empire, several large metallurgical enterprises operated. The most powerful enterprise was the Alexander Plant. Its average annual smelting was about 170 thousand pounds. Until 1808, the plant worked on coal, and after a break in relations with England on charcoal. From 1800 to 1812, the enterprise transferred 5701 guns to the artillery department. The products of this enterprise mainly went to meet the needs of fortresses and fleet. An important role was played in the northwest of the country by the Kronstadt Foundry. From 1801 to 1812, he annually produced up to 60-61 thousand pounds of shells. The Petersburg Foundry also manufactured shells; it produced up to 50 thousand pounds of ammunition per year. Northwest plants in 1811-1812 experienced a serious lack of fuel. Therefore, at this time there was a decrease in output. The government transferred part of orders to enterprises in the south and the center.

In the center of Russia stood out the Bryansk foundry. In 1806, in connection with the rearmament of artillery, the Bryansk plant was assigned to master the production of equipments for mounted companies. The plant received an order for 120 guns. In 1812, this company transferred 180 guns to the army. A number of guns manufactured and Gusevsky plant. Here in 1800, 120 24-pounders were cast for Western fortresses and the Black Sea Fleet. Since 1802, the company has produced only ammunition. Ammunition also produced plants Batasheva. In the south of the country, a large role was played by the Lipetsk and Lugansk plants. Lugansk plant in the period from 1799 to 1811 gave annually on 50 thousand pounds of ammunition and guns. In 1812, he gave out 20 thousand pounds of guns and about 90 thousand pounds of ammunition. Lipetsk plant produced only ammunition. The factories of the center and the south gave about half of the guns produced for the army on the eve and during the 1812 war. Part of the metal they received from the Urals.

At the beginning of the XIX century 25 state (state) and 133 private metallurgical enterprises operated in the Urals. Ural enterprises not only supplied other plants with metal, but also produced ammunition and tools themselves. From 1811, the Kamensky plant was the center for the production of guns in the Urals (in 1800-1810, it produced ammunition). On 1811-1813 The plant received the task to cast 1478 guns. 1415 guns were made in blanks, their drilling took place at other enterprises. The Yekaterinburg plant also cast cannons. In 1811, he gave the country 30 thous. Pounds of guns and ammunition, and in 1812 year - 87 thous. Pounds. State-owned factories could not cope with all orders, and therefore attracted private enterprises. Casting guns engaged Zlatoust plant. The Urals enterprises were even more important in the production of ammunition. In 1811, they received an order from the military ministry for the manufacture within two years of 400 thousand pounds of guns, 473 thousand pounds of ammunition. In addition, the maritime agency ordered 33 thousand tons of ammunition.

Russian industry fully met the needs of the field army in guns and ammunition. The army during the 1812 war of the year was not lacking in ammunition. Only in Kaluga, the Urals enterprises sent 49 thousand nuclei, 2375 bombs, 7734 grenades and up to 400 thousand cartographic charges. On the eve of the 1812 war, artillery parks were created to improve the organization of supplying the army with weapons and ammunition, creating the necessary reserves. A total of three lines created 58 parks. The parks of the first line had their own transport and were intended for the supply of divisions. They were located in the army dislocation zone. The second-line parks did not have their own transport and were intended to replenish the first-line parks with the help of local transport. They were located in 200-250 km from the parks of the first line. The third line parks were removed from the second line on 150-200 km and had to replenish their reserves with the help of local transport. Moving east, the army could rely on these parks. A total of three lines of parks were concentrated 296 thousands of artillery shells and 44 million live ammunition.

Small and edged weapons. There were several types of firearms in service with infantry and cavalry at the beginning of the 19 century. Light infantry (rangers) were armed with chasseurs of a model 1805 g. (16,5-mm with 6 cuts) with bayonets, non-commissioned officers and the best 12 rifle companies were armed with fittings arr. 1805 g (16,5-mm with 8 cuts). The range of their shooting was 1000 steps. Linear infantry (grenadier and musketry regiments) was armed with infantry flint rifles arr. 1805 g. (19-mm), infantry flint flint rifles arr. 1808 of the year (17,7-mm). In addition, Russia purchased a number of guns in England (from 1805 to 1812 - 90 thousand) and in Austria (24 thousand). From England imported infantry 19-mm muskets "Enfield" arr. 1802, and from Austria - infantry 17,6-mm guns arr. 1807, the officers and generals of the Russian infantry were armed with an infantry sword mod. 1798 with single-edged straight blade 86 cm long and 3,2 cm width (1,3 sheathed weight kg). Ordinary and non-commissioned officers of infantry units as a melee weapon had a cleaver arr. 1807 with single-edged blade length 61 cm and width 3,2 cm (weight 1,2 kg).

Hussars had 16 hussar light carbines and musketones on a squadron. The dragoons and cuirassiers were armed with smooth-bore guns of the 1809 model of the year (17,7-mm). They were shortened model infantry gun arr. 1808 d. In addition, in all 16 cavalry regiments, the men of each squadron had a 16,5-mm cavalry threaded choke arr. 1803

Each cavalryman of the Russian field army was armed with a pair of saddle pistols that were stored in holsters attached to both sides of the bows of the saddle. In addition to cavalrymen, equestrian gunners, infantry pioneers and officers of all military branches were also armed with pistols. The range of pistols was very significant (as in the French army), as many officers bought these weapons at their own expense. The secured officers had expensive foreign samples of the work of the leading gunsmiths of Europe. For rank and file cavalrymen, the 17,8-mm cavalry soldier pistol mod. 1809 g. In smaller quantities, the troops were supplied with an improved version of this weapon with a shortened (for relief) forearm and ramrod attached by a movable arm to the barrel (to avoid loss). These weapons were usually given to those junior commanders who did not have the money to buy their own weapons. Armed with pistols and Cossacks (at their own expense). 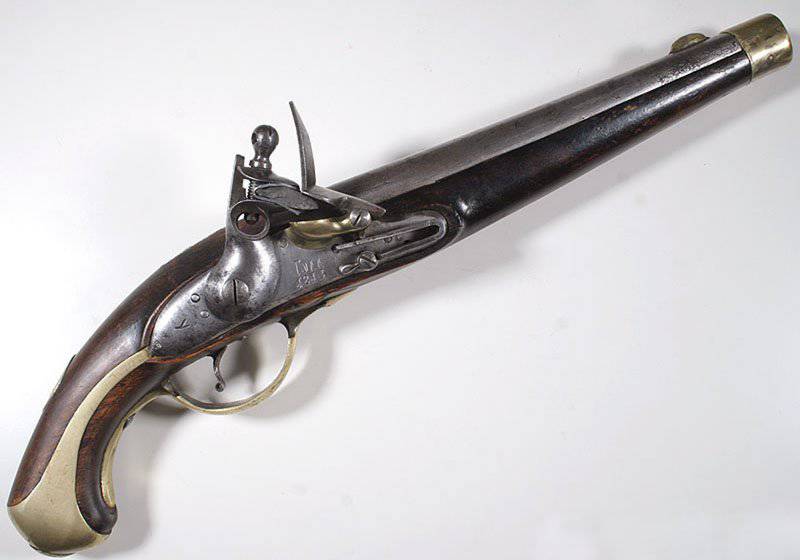 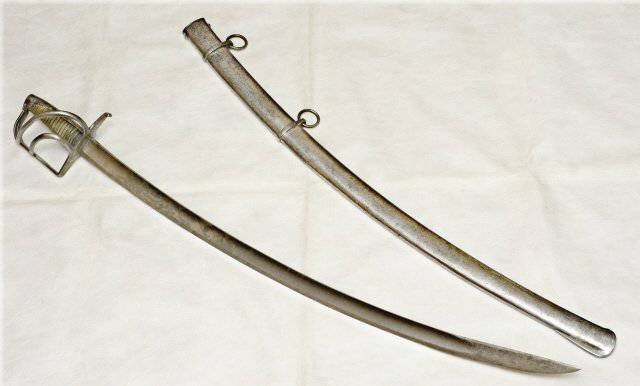 The problem was that the troops had rifles of different calibers, and the production of some was already stopped. So, the infantry guns had 28 of various calibers, the spiral ones - 13. Part of the gun park was domestic, and part of the foreign. In the 1809 year, we set the task to establish a single caliber for all types of guns - in 7 lines (17,7 mm). However, this task was not completely solved. Continuous wars, which led to significant losses of guns, did not allow the army to re-equip one-caliber weapons.

The production of small arms was concentrated in Russia at three arms factories: Tula, Sestroretsk and Izhevsk. In addition, Petersburg, Moscow and Kiev arsenals were engaged in the manufacture of guns and their repair. The main center for the production of small arms was the Tula plant - up to the year 1806, it produced annually up to 43-45 thousand guns. In 1808, the Tula factory switched to the manufacture of guns of the 1808 sample. For the plant, an annual standard was established in 59,6 thousand guns. In 1810, the outfit was increased: the plant required 59,6 thousand guns for the army and 39,3 thousand guns to the reserve. At 1812, the government set the standard for 144 thousand guns. In total, during the 1812 of the year, state workshops of the Tula factory, together with contractors (“free craftsmen”), produced 127 thousand guns.

The third center for the production of small arms was the Izhevsk plant. It began to create in 1807 year on the basis of the Izhevsk Metallurgical Plant. According to the project, after the commissioning of all facilities, the plant was to produce 50-75 thousand units of small arms and cold arms. In 1810, the plant gave 2,5 thousand guns, in 1811, about 10 thousand, in 1812 year - 13,5 thousand.

Thus, the arms factories of the Russian Empire gave annually up to 150 thousand guns. Arsenals could repair about the same number of guns. In addition, there were craft workshops. For example, Pavlov's gunsmiths gave in 1812-1813. about 1 thousand guns, they were purchased to arm the militia. The industry of Russia made it possible to solve the problem of the current provision of troops, armament of new formations, to create a certain reserve. So, on 1 in January 1812, in the arsenals and factory warehouses there were 162,7 thousand infantry guns, 2,7 thousand Kirasira rifles, 6,9 thousand carbines, 3,5 thousand dragoons guns, 3,9 thousand pairs of pistols. A significant part of these weapons went into service with the newly formed units.

Not so well with the armament of the militia. It was necessary to get in a short time 250-300 thousand guns. Military plants were not ready to arm the militia. I had to buy in England 50 thousand guns. But British guns arrived late and were incomplete. As a result, the rifles in November 1812 were sent to Arzamas to arm spare parts and militias.

Campaigns 1805-1807 showed that these stocks are insufficient. In 1807, the production of gunpowder is doubled. Powder factories produce 116,1 thousand pounds. At this level, the production kept the remaining years. By the end of 1811, the armed forces had a sufficient supply of gunpowder - 322,8 thousand pounds. In addition, up to 50, thousands of poods were available in stockpiles of ready ammunition. In 1812, the plants produced: Okhtensky - 41,9 thous. Pounds, Shostensky - 24,5 thous., Kazan - 19,7 thous., Private factories - 9 thous. Part of this powder remained for the 1813 campaign of the year.