January 5 2019
45
The nationality of our next hero is always hidden. He can be both American, and British, and Canadian. And maybe an Australian or even a New Zealander. It can be different. Perform completely different functions in different armies of the world. 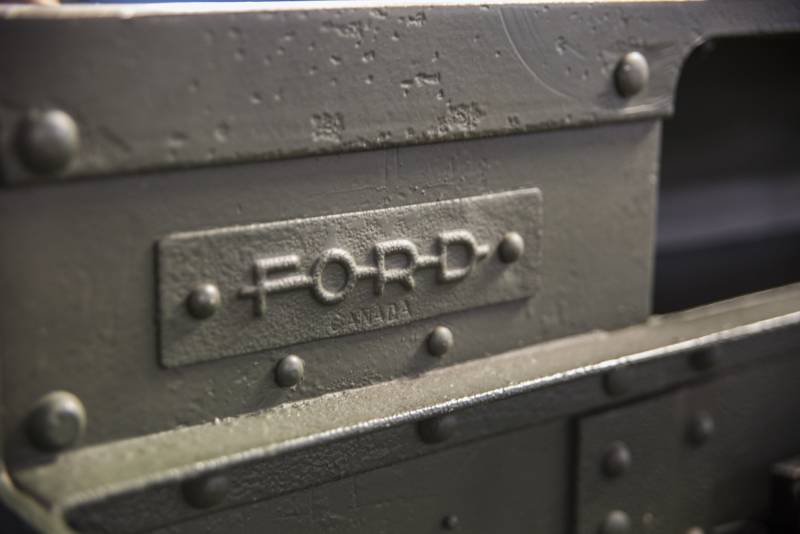 So, our story today is about the Universal Carrier multi-purpose armored personnel carrier. 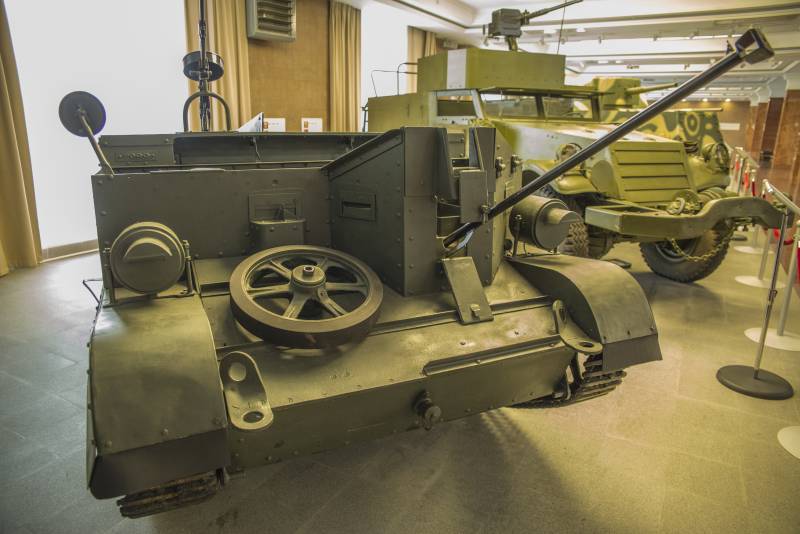 We will tell you about a car that had so many modifications that it just captures the spirit. A car that fought in the British, Australian, Canadian, New Zealand and even Indian armies. A car that fought on the eastern front on both sides. And for the Red Army and the Wehrmacht. 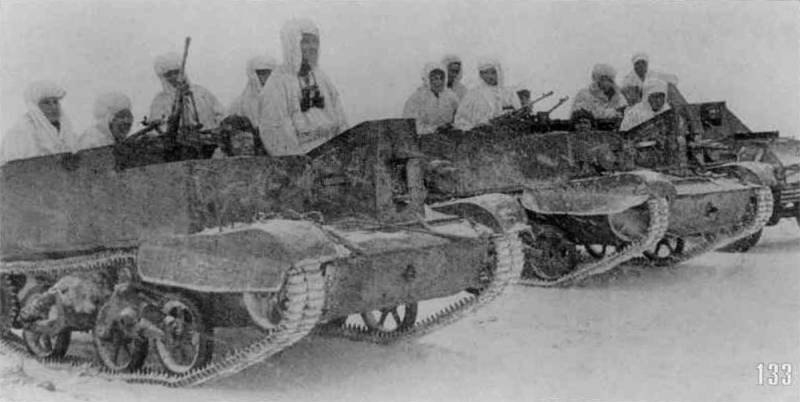 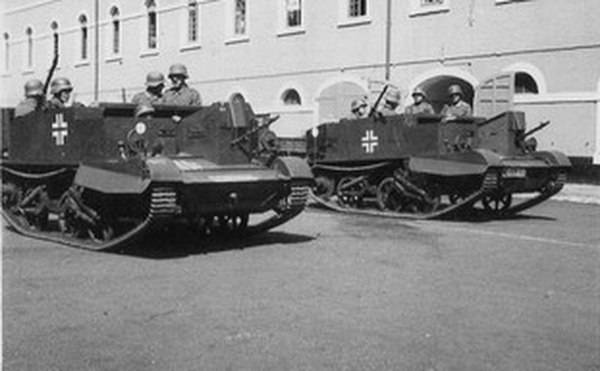 To understand this machine, you just need to know the options for use. Otherwise, it seems that completely different conveyors were made on the same chassis. Here with a list of modifications and begin.

It is this thing in many documents called as "conveyor for the machine gun" Bren "or just" Bren ". 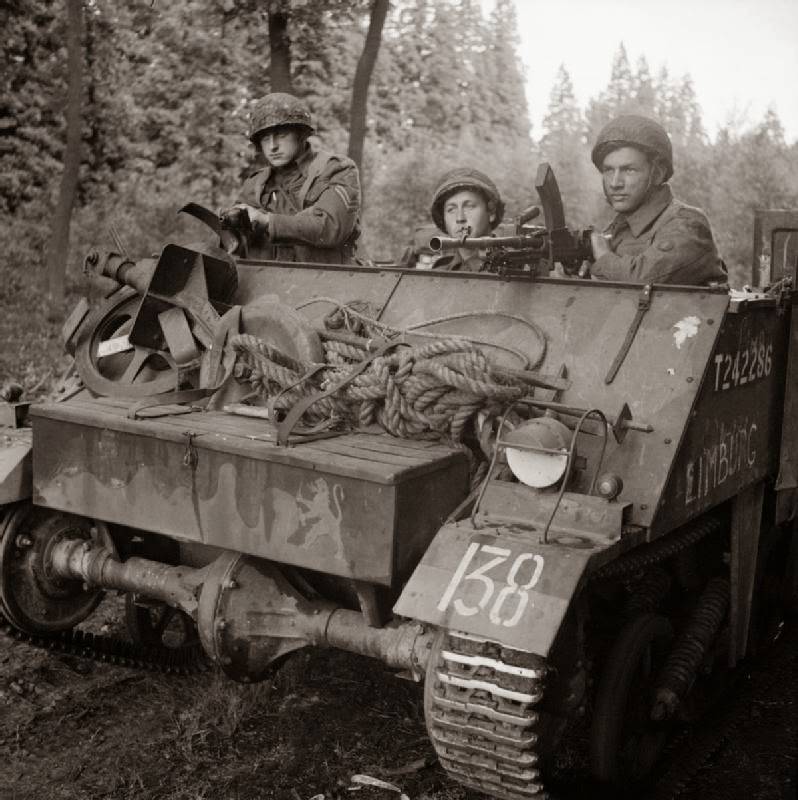 Scout Carrier - reconnaissance option. In comparison with the base, it was additionally equipped with a radio station №11 and a Boys anti-tank gun. Armored was only starboard. Crew 3 man. Manufactured by 647 units. 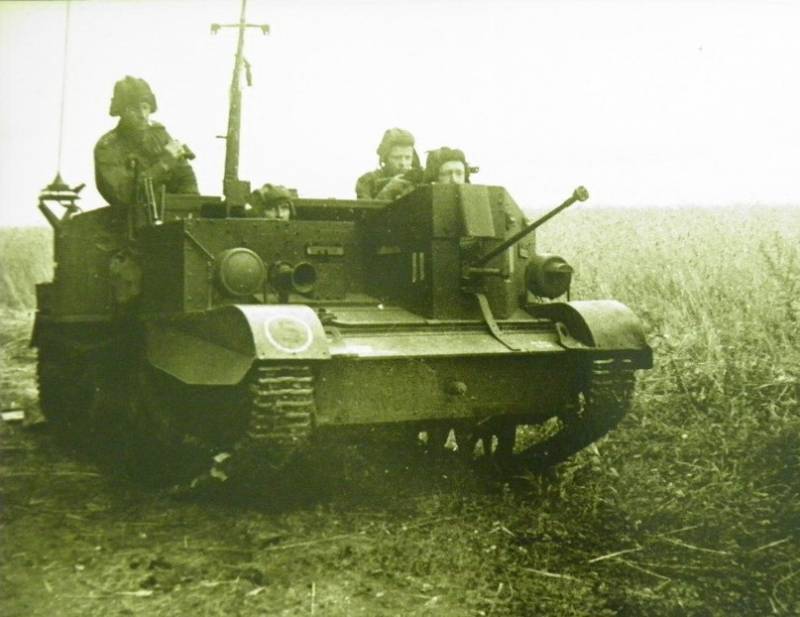 Universal Carrier Mk 1 (11, III) —The mainstream serial English version. The welded hull, open on top, is a simple rectangular shape, running gear with three support rollers. Machines of different years of release had minor differences in the design of the power plant, body and equipment. 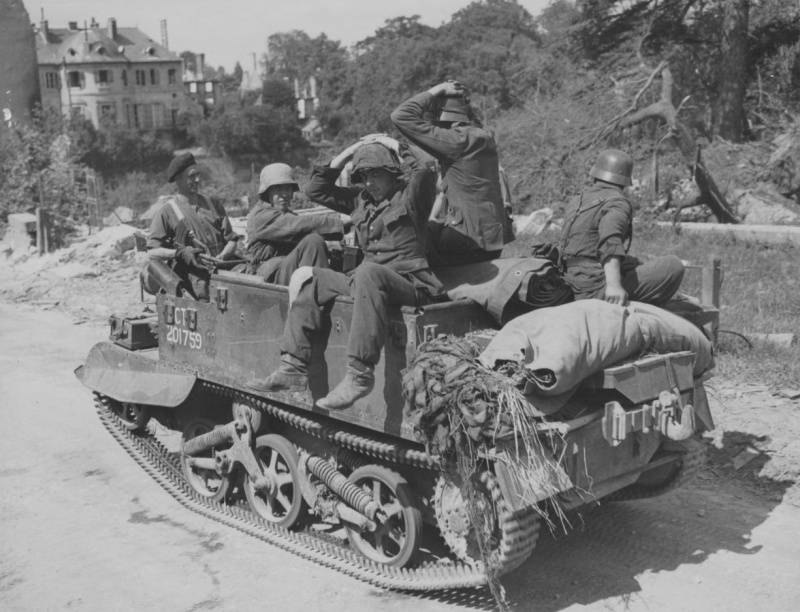 Universal Carrier Mk I * (C01UC) is a Canadian version of an armored personnel carrier, identical in design and appearance to the English version. Combat weight 3,56 t, Ford V-8 engine with 85 horsepower

In addition to the main one, the variants C21UCM (self-propelled 3-inch mortar) and C21UCG (self-propelled 2-pound anti-tank gun, manufactured by 20 units in 1942) were produced. Ford Motor Stock and Dominion Bridge Stock manufactured 1941 1945 units from 28 to 992 year.

MG Carrier (LP No. 1, 2,2А) is a variant produced in Australia. The welded body and chassis are similar to the Universal Carrier Mk I. Combat weight 3,68 t, Ford V-8 engine, power 95 hp Manufactured by 5500 units. 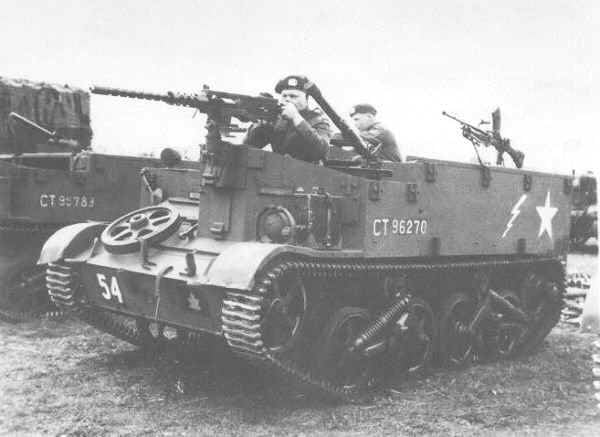 2 208 units of this armored personnel carrier were delivered to the Soviet Union. 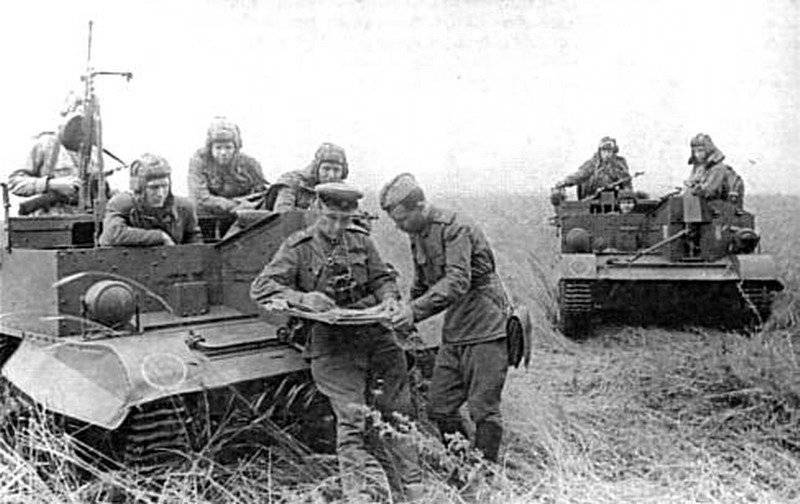 At this point, most often you have to write that there was no such machine in the Red Army. It is quite possible to agree with this, if we consider this car by its name and purpose. But ... In the USSR by this time a whole gamut of similar conveyors was developed! But they were called light tractors.

Remember the "pioneer" "Pioneer" 37 plant them. Ordzhonikidze, sample 1937 of the year. More precisely, two "Pioneers". Options B1, where the troops sat with their feet out, and B2, with the troops with their feet inward. Yes, these machines have been released for all 50 units. They did not take root in the troops due to the small capacity and instability on the turns. And the force of this tractor left much to be desired. 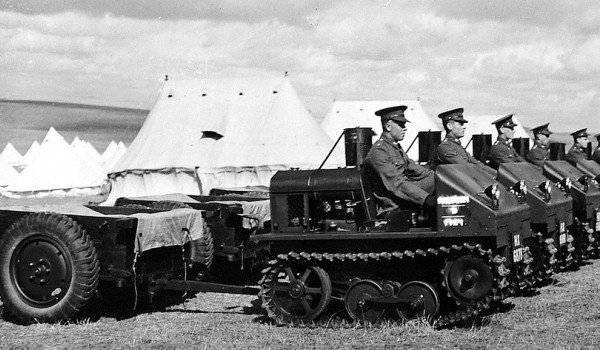 But created in the same factory at the end of 1936, the designer N.A. Asterov a full-fledged high-speed armored tracked tractor "Komsomolets" T-20 (factory index 020) was really good. 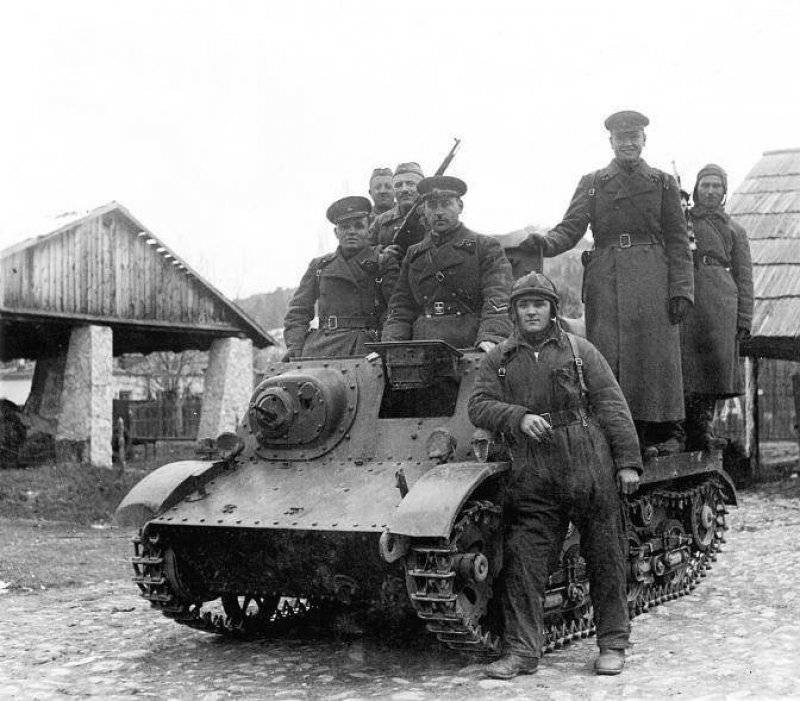 In principle, if the production capacity of the USSR would allow to release this tractor further (production stopped in 1941 year due to the need to manufacture light tanks), then its transformation into a carrier for infantry would be quite logical.

The subjunctive with regard to technical engineering and design decisions is risky. In hindsight, you can always find the right way to resolve some long-standing technical and technological problems. Yes, and "make big eyes" is the same obvious solution!

So back to our hero. Moreover, the process of "birth" of the "Universal" and "Komsomolets" is almost the same. "Parents" of these machines for a long time engaged in light tanks. And the development time of the machine is almost identical.

The first samples of the family of armored personnel carriers, created on the basis of a light tanker (wedge) "Vikkers-Karden-Loyd", were released in 1937-1938 years. These were low, open-top armored vehicles adapted for the installation of the Vickers and Bren machine guns. 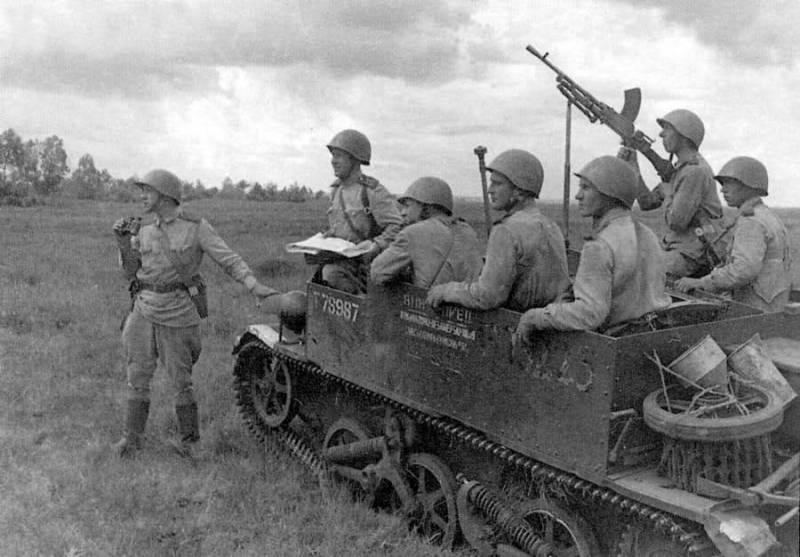 Western experts generally consider the Englishwoman a prototype for most European tankettes. But the British army did not take the car. No improvements were made to success. We can assume that this machine is unsuccessful initially.

Universal armored personnel carrier - "Universal", appeared in 1940 year. It was intended for use as a reconnaissance vehicle in infantry and reconnaissance units, a tractor for artillery systems, observation and command vehicles, transporters for machine guns, mortars and flamethrowers. 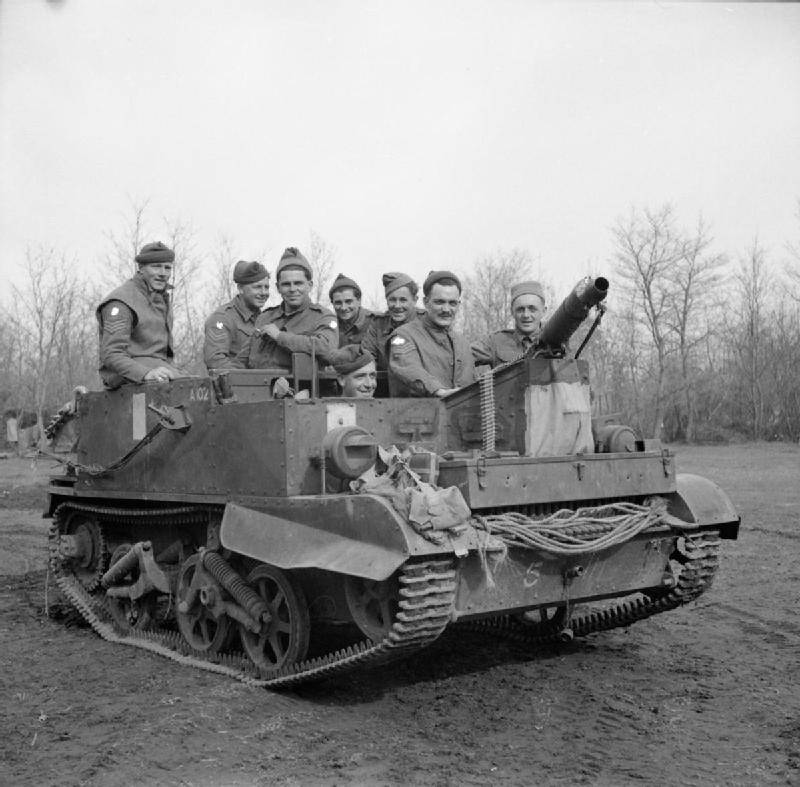 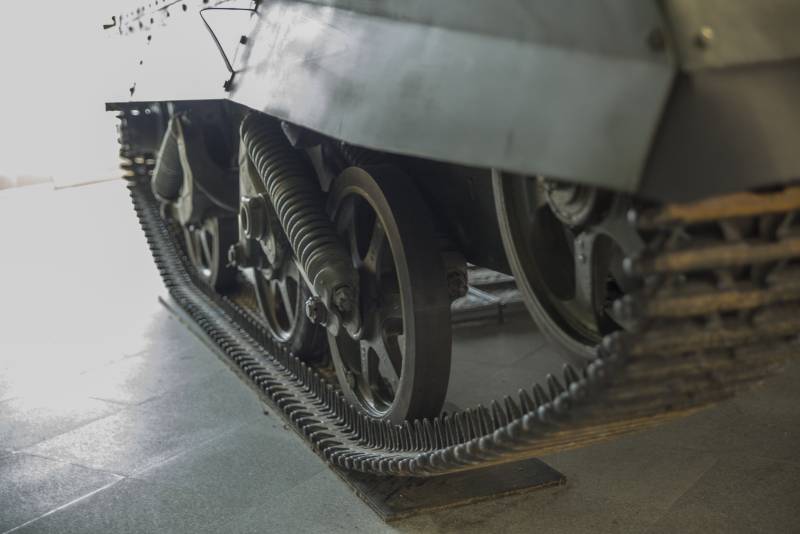 The drive was carried out from a four-stroke V-shaped gasoline engine "Ford" power 100 hp The engine was installed in the power compartment, located in the aft part of the machine, there is also mounted a manual 5-speed gearbox and side clutches. 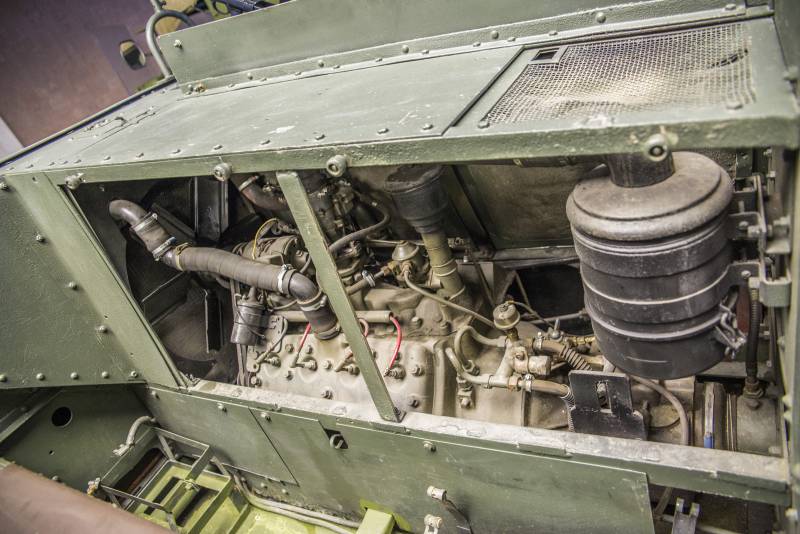 Office of command and landing located in front of the machine. Here, depending on the purpose of the vehicle, weapons, equipment or troops were deployed in the number of 3-4 people. 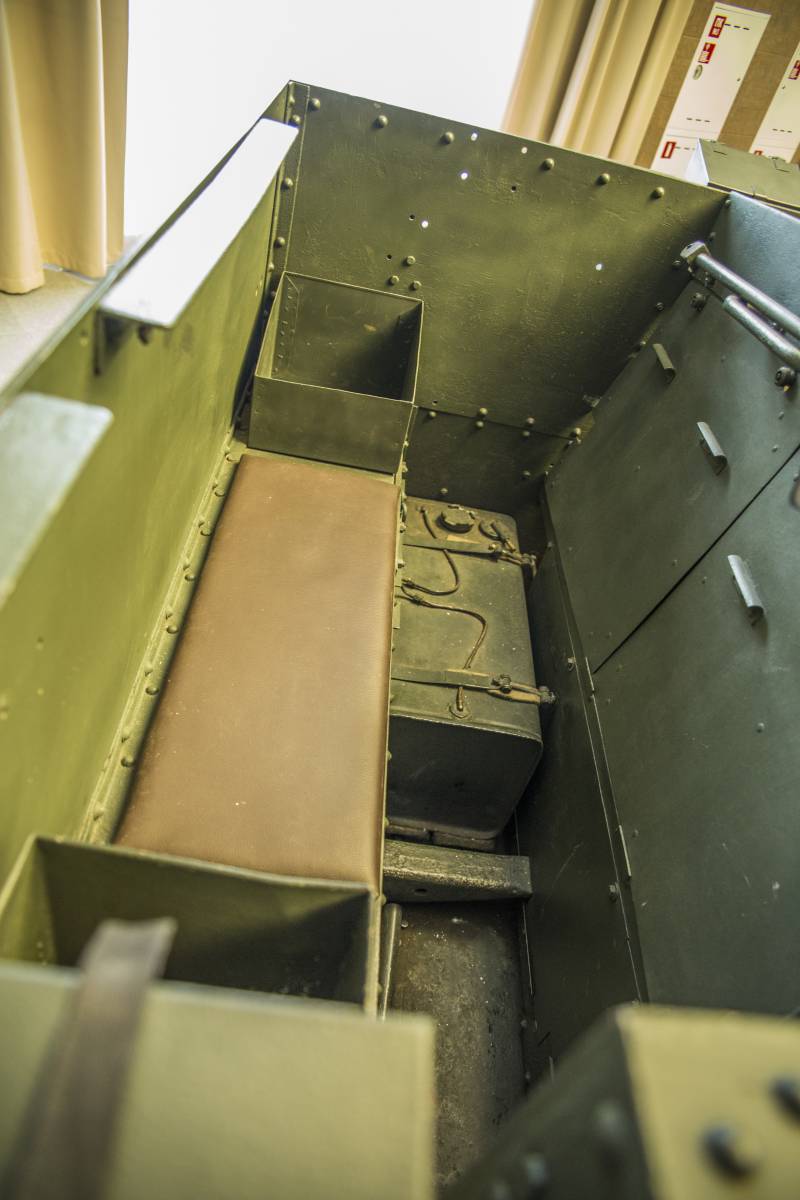 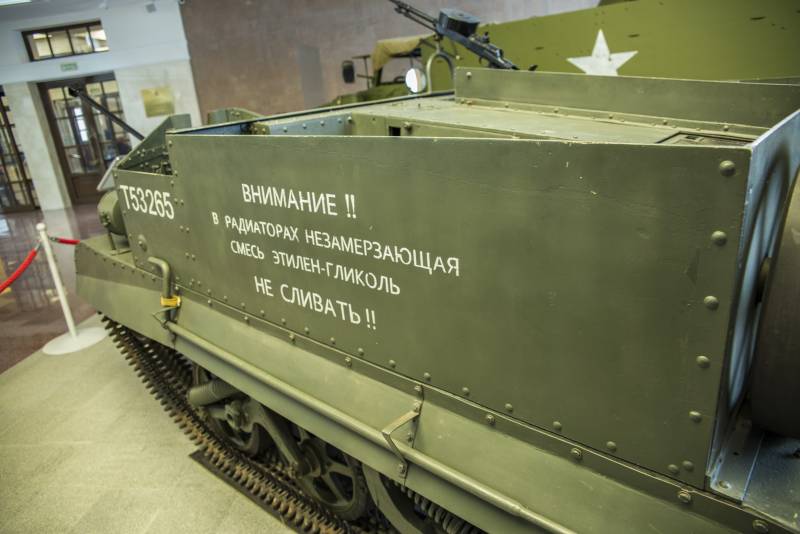 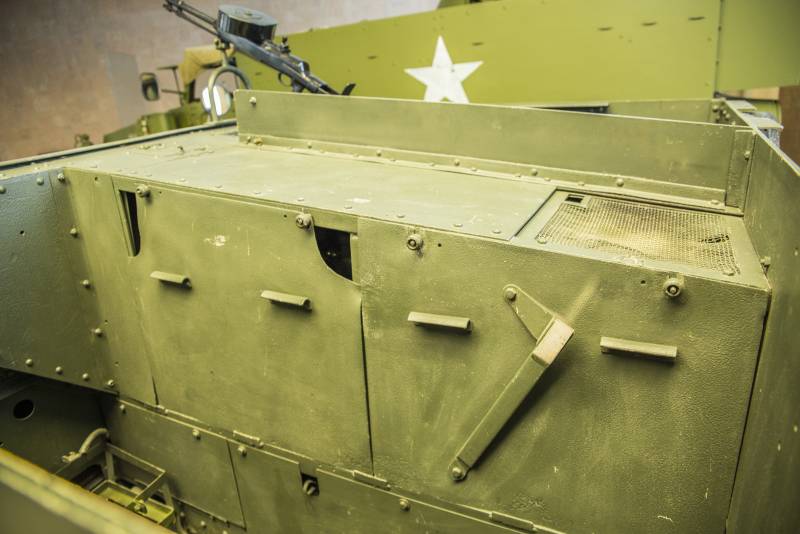 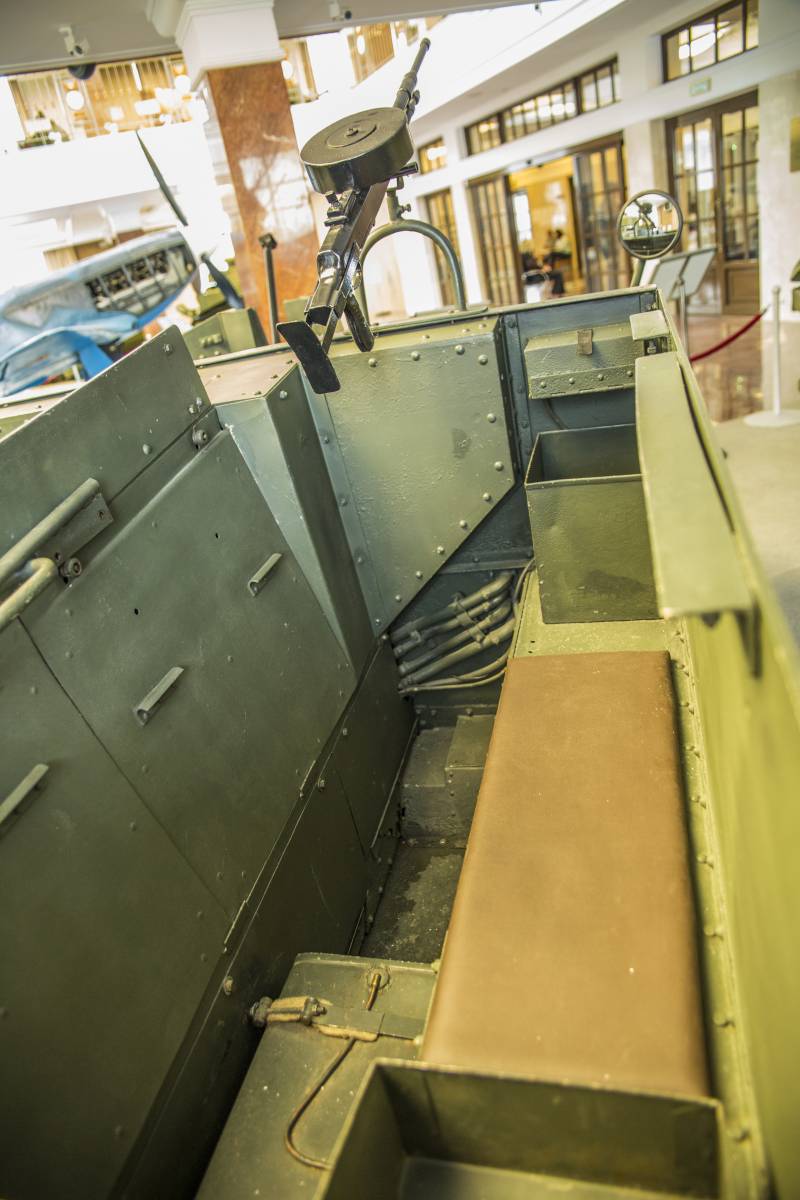 The low ground pressure (of the order of 0,45 kg / sq. Cm) and the presence of a powerful engine enabled the designers to combine in the machine two often mutually exclusive qualities — high throughput and speed.

Once in childhood, the friend of the father of one of the authors of this material, the one-armed tank scout, told about the American on whom he fought. Then the story sounded like a legend. And only after the passage of time, it became clear that the talk in this story was about the "Universal". 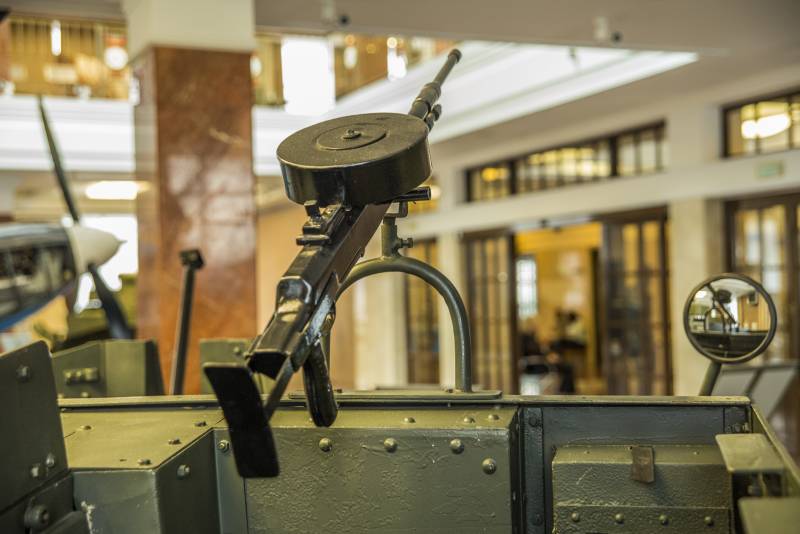 Soviet scouts treated this armored vehicle ambiguously. On the one hand, the car is simple and speedy enough. And for a soldier it is always better to go badly than to go well. On the other hand, the car "mocked" scouts in full.

The fact is that intelligence was recruited by people of fairly powerful build. And the soldiers' uniform was not from modern materials. Especially in winter. Padded jackets, overcoats, wadded pants. And in the design of the "Universal" was one chip that made the life of the landing (in summer), then the group commander and driver (in winter) simply unbearable. 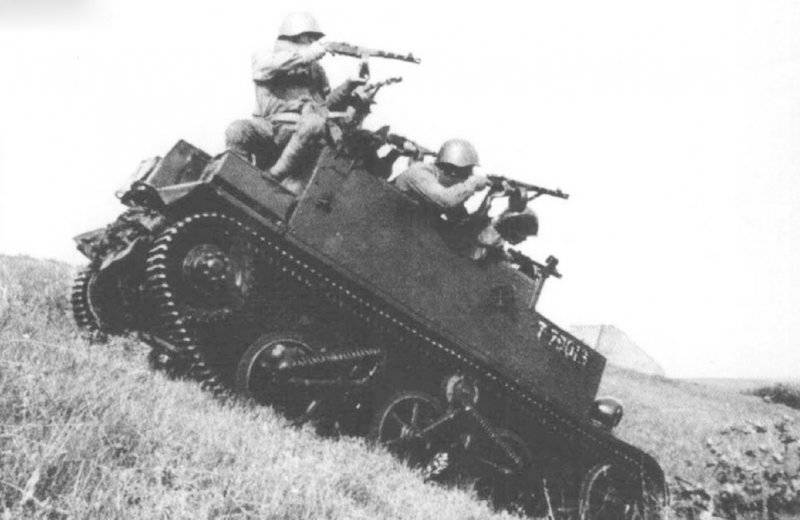 The location of the engine in the stern forced the designers to position the engine hood in the troop compartment. A sort of "table" in the middle. And the scouts were sitting with their backs to the sides, knees resting on this table! Moreover, given the size of the soldiers and the dimensions of the car, it was also problematic to move the knees away from the hood. Now imagine a summer somewhere in the south of Russia. And the hot engine hood, in which you rest your knees.

True, the commander and driver in the department of management in this version only laughed. They did not come into contact with hot metal. On the contrary, the breeze blew. Not riding, but a resort.

But in winter, the commander and the driver, at any stop, moved "to sit on the table" in the troop compartment. The breeze made a ride in the torture department in the winter. It was then that scouts were already laughing ...

Under the Lend-Lease, the Red Army was supplied only by the Universal car Mk1. Other modifications to the Soviet soldiers were not intended. That versatility and attracted the command of our army in these machines. 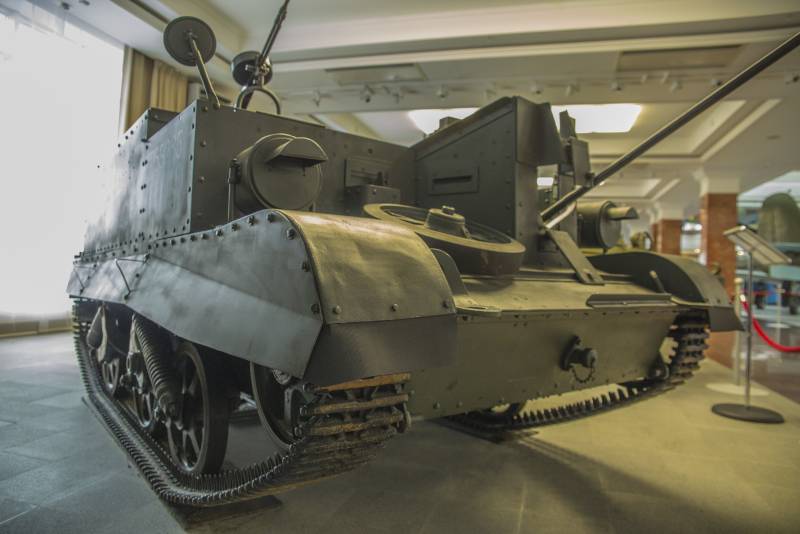 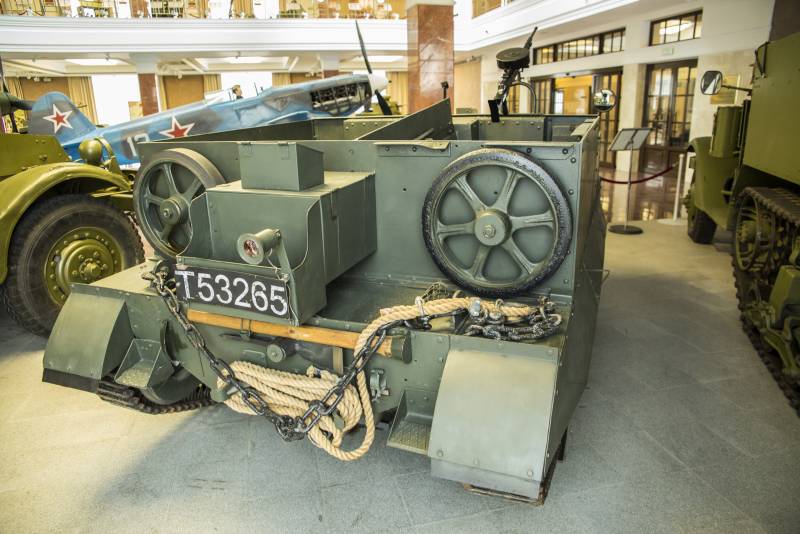 For completeness, the story about this car is to give an example of the combat use of this armored personnel carrier. The story that we publish today is not a memory, but a description of the feat in the award list of the Soviet soldier.

At the end of 1943, the Soviet troops defeated the fascists on the r. Dairy, came to Perekop. Brigades of the 19 tank corps dismembered the mountain rifle division of the Nazis. Enemy columns rushed along the steppe, hoping to break away from our troops and make their way to the Crimea.

Observation of one of these columns until the approach of our units was assigned to the reconnaissance group Lieutenant Galyamov. The group had two Universal armored personnel carriers and a motorcycle with a sidecar.

“In the Novo-Natalyivka area, one of the armored personnel carriers of our reconnaissance group fired at the enemy and stepped off the stacks of straw. Here the scouts seized the“ tongue ”- a lingering soldier from the Hitlerite column.

The prisoner turned out to be a clerk of the division headquarters. He said that the command of the column with a group of soldiers had gone ahead. The scouts rushed in the direction indicated. And indeed, in 10 km south of Novo-Natalyivka, they found a group of fascists in corn.

Having come under fire from an armored personnel carrier machine gun, the Nazis surrendered. The deputy commander of the mountain rifle division, the chief of staff and the chief of the sanitary service were taken prisoner along with the guard soldiers. "

In principle, this story can be completed. But there is one question that quite often sounds after the story about this car. Steering wheel! The Universal was driven not by levers, like a tank or tractor, but by an automobile steering wheel. In the first half of the 20 century, a tracked vehicle with a "car" control. 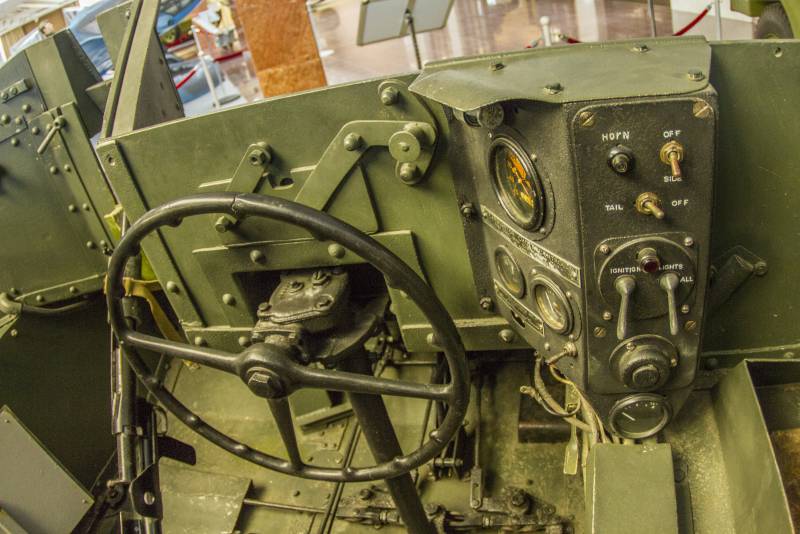 The subtext of the question is clear. And if the wheel was not on the wheel version of the conveyor? What would seem to be easier to go the same way that the Americans walked. “Plant” a ready-made body on the truck chassis and get a wheeled armored vehicle or wheeled armored personnel carrier. 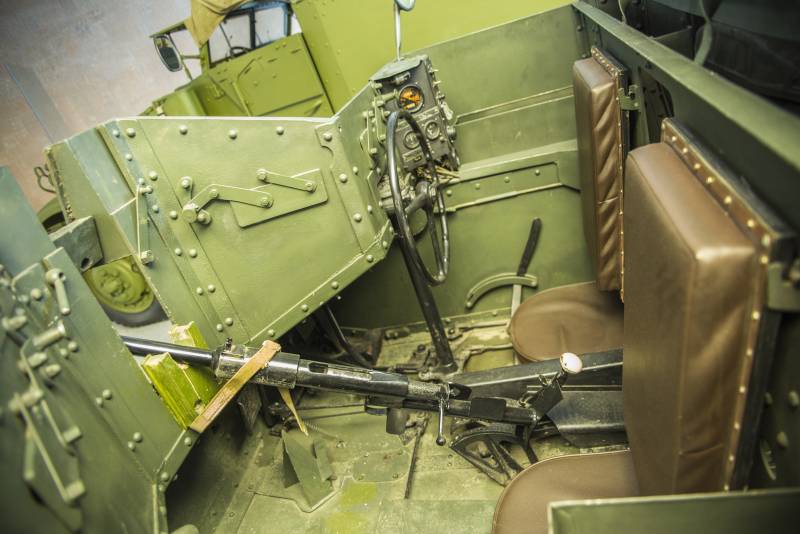 Indeed, such attempts were. The British decided to go this way first. They did not even look for a new chassis. In 1940, the Universal's corps was seated on the chassis of the Guy armored car. However, such a symbiosis led only to the deterioration of the characteristics of the machine.

The next attempt to "hit around" "Universal" was made by Canadians in 1944 year. The designers tried to place the body on the chassis of the Canadian Ford truck 4х4. The result was about the same as the British. Both options wheel "Universal" and remained experienced. 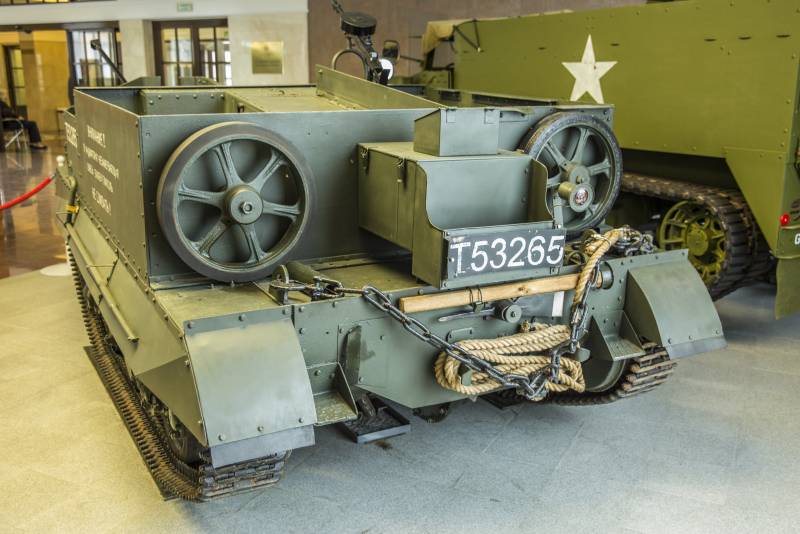 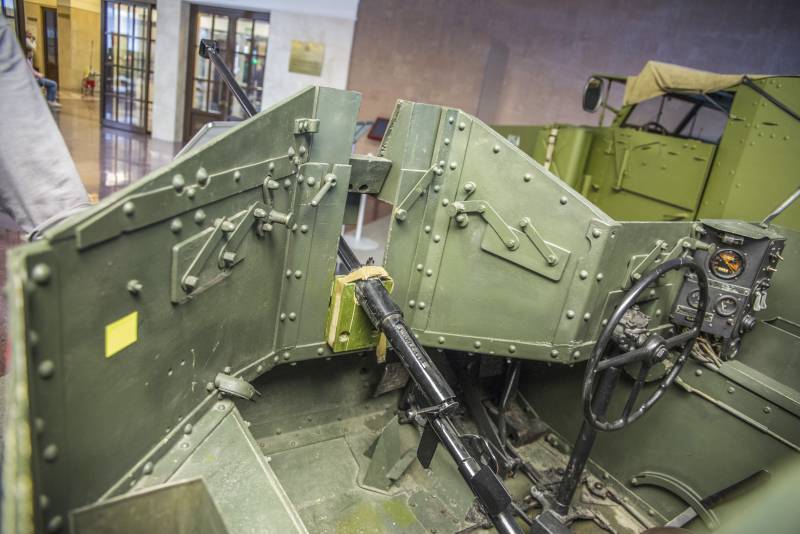 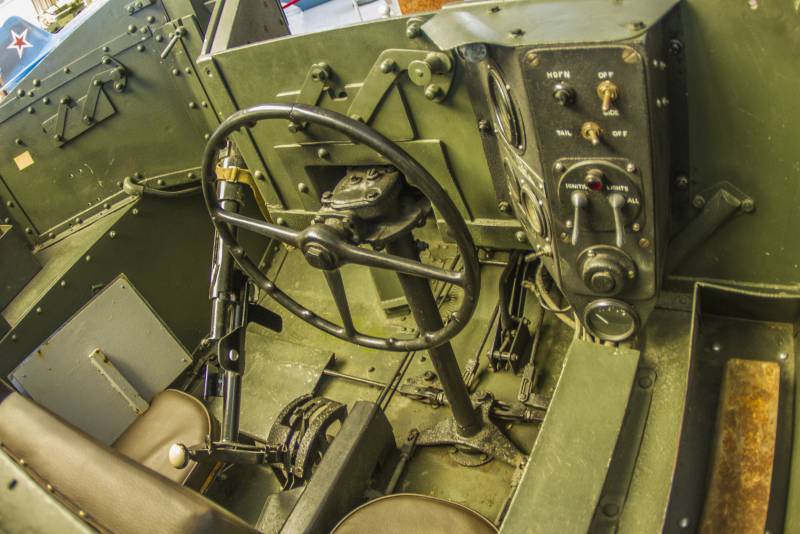 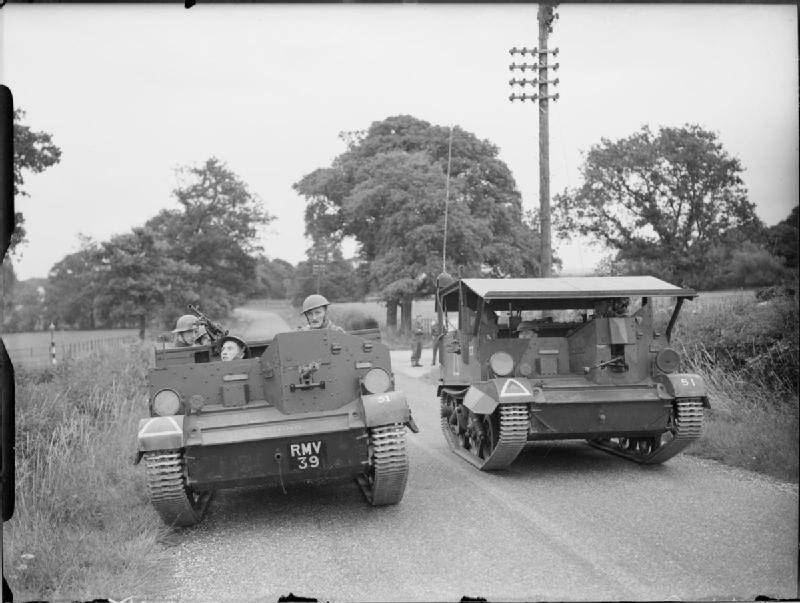 We are in Yandex Zen
Anti-aircraft missile system C-400 Triumph against the Patriot
45 comments
Information
Dear reader, to leave comments on the publication, you must to register.