January 6 2019
47
Well, we waited: after the Russian and Israeli experts, and in America, they started talking about the withdrawal of American troops as a “cunning move” aimed at confusing Russia with its allies in the region. And there are, of course, two key allies: Iran and Turkey. Retired US colonel Douglas Macgregor in an interview with Fox News said: “We must leave Northern Syria as soon as possible, because there are tens of thousands of Turkish soldiers who are ready to attack the Kurds - the terrorists who attacked Turkey in this area. We forced the Syrian government to enter the area, while we ourselves are leaving ... Putin will have to make a choice». 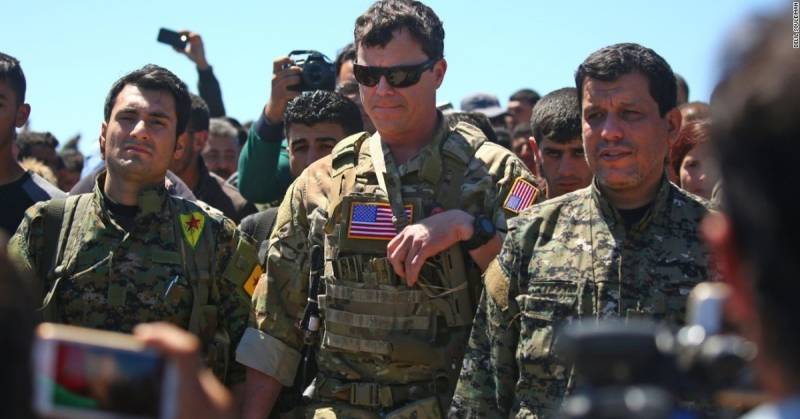 Such a touching unanimity of the expert community in this case does not seem to be stupid or stupid - an analysis of the situation shows that Russia still has cause for concern, and its behavior in the region should now become especially verified and far-sighted. There are hopes for this, in general: the Kremlin is conducting the Syrian “party” especially carefully and intelligently, but still it would not hurt us to understand what Moscow should do now and how it should try to avoid traps.

First of all, let us make one important clarification: of course, we are talking only about the possible deterioration of relations with Turkey. Cooperation with Iran is beyond threats and suspicions: there are many points of contact, few irritants and contradictions, some dependence of Iran under US sanctions. All this rather cements the relationship between the two countries, and the withdrawal of US units from Syria can only have a positive effect on them.

But with Turkey, the situation is quite different. And that is the goal of this geopolitical etude of the Americans.

First of all, we do not forget that Turkey is the most important, one of the key US allies in NATO. The strategic position of the country, which closes the entire Mediterranean direction for Russia, convenient control of key (for the Russian Federation) sea straits, a rather powerful army, armed according to NATO standards, a convenient location relative to such "sore points" of world geopolitics as the Middle East, Transcaucasia (and the entire Caucasus as such), the Caspian Sea basin, which is very rich in hydrocarbons — all of these factors, even without connecting with each other, allow Turkey to be considered one of the key footholds for the United States in Eurasia. Collectively, this makes Ankara a valuable ally for Washington, like the United Kingdom or Germany.

At the same time, the United States made a number of strategic miscalculations that nearly brought Turkey out of their undoubted influence. First of all, this is a bet on the Kurds in the Syrian conflict - Turkey hates and does not accept any, even the slightest, hint of independence or even autonomy of the Kurds. The fact is that the territory of Turkey largely consists of provinces inhabited by ethnic Kurds. The ethnic composition of Turkey for about 20% consists of Kurds, and more recently they are active, with weapons in the hands, fought for their independence. In general, the problem of the Kurds for Turkey is not at all an empty sound, and the recent bet on them overseas allies was rightly perceived in Ankara as a betrayal.

Do not forget about the attempted coup d'état in Turkey, the organizers of which, according to Ankara, are still hiding in the United States, and the process itself has not been without American special services. This, too, without any exaggeration, betrayal. Moreover, the one against whom the conspiracy was directed still leads Turkey and is unlikely to forget the incident so easily.

The events of recent years, when Turkey suddenly became closer to Russia, clearly showed the United States that they could lose this key ally. And the best way to do this is to continue to persist in its support of the Kurds, who have large armed formations almost at the border with Turkey. Probably, American analysts long ago pointed out to their leadership the destructiveness of such behavior, and then, finally, they were heard - the Americans, at least in words, "threw" the Kurds and untied their hands to improve their spoiled relations with Ankara.

Now, Russia faces a rather difficult choice: to take control of the Kurdish territories in northeastern Syria, at the risk of quarreling with Turkey, or leaving them there to fend for themselves. In the second case, unfortunately, under the likely Turkish control will be the main oil fields of Syria, and the most fertile land in the floodplain of the Euphrates River, as well as some large reservoirs on this river, which are able to somehow solve the already very acute water supply problem. of the republic. The cities of Membij (Manbij) and Raqqa (the recent “capital” of ISIL banned in Russia) are key to controlling the northeast of the country, and giving them away, Russia and its allies in Syria will lose the most significant chance of successfully rebuilding a state destroyed by civil war.

In part, we see that the process of occupying territories by Syrian troops has already begun - according to reports from Syria, units of the Syrian army have already occupied the city of Membij. And this was done at the call of the Syrian Kurds, who previously controlled this city. Unfortunately, there is no reliable information about the forces engaged in this regional center. But it seems that the Kurds have already secured a kind of buffer in the most threatened direction.

Incidentally, the head of Turkey, Recep Tayyip Erdogan, said that the Turkish army could launch a military operation in the area of ​​Membij, if the units of the Kurds did not leave it. And their readiness to “hand over” the city to government departments is quite understandable: the Kurds are seriously counting on much greater loyalty to Damascus and, perhaps, even on granting autonomy within Syria. But it must be remembered that the withdrawal of US units from Syria has just begun, the United States is still quite able to control Kurdish territories, and how easily the transfer process of Membijah went through, fits into the scenario of a possible political trap for the Russian Federation.

Nevertheless, common sense suggests that the probability of domestication of the "Turkish Crane" is vanishingly small, and Moscow is probably better to focus on the "tit in the hand" that it receives. This is evident already now, when the USA and Turkey still seem to find some compromise on the supply to Ankara of the Patriot air defense system, as well as on the fulfillment of the contract for the delivery of F-35 fighter-bombers to Turkey. Yes, there’s a lot of examples to go: even our traditional “ally” Belarus is increasingly looking towards Europe, in every possible way emphasizing its independence from Moscow. Minsk did not support us even in such key issues as the return of the Crimea to the Russian Federation or the recognition of the independence of South Ossetia and Abkhazia. Is it worth hoping that an order of magnitude stronger and more authoritative Turkey will become an active conductor of Russian interests in the region?

It is clear that even the best relations with Turkey will not lead to the fact that it will firmly integrate into the wake of Moscow. Ankara is actively pursuing its sovereign policy, claiming rather the role of a regional superpower, rather than the status of a Russian ally.

And if so, we obviously do not have to make sacrifices in Syria for the illusion of a hypothetical Russian-Turkish alliance. Probably the best that Moscow can do is help Damascus in regaining control over the northeastern provinces and gradually bring Syria to the level of a more or less full-fledged and capable ally.

As for relations with Turkey, then, of course, it is not worth breaking them off. And ideally, it will be possible to regain control of the Kurdish lands without direct clashes with Turkish troops, even if they are clashes between the Syrian army or the Kurds themselves.

To this end, Moscow will have to show the real highest political pilotage, acting at the same time, quickly and accurately. And the military steps of Damascus should go hand in hand with the efforts of our diplomats and special services aimed at the soonest possible establishment of a political dialogue between the Kurds and Damascus.

That is, if to simplify, we need to act as quickly as possible, so that the Turks simply do not have time to strongly strengthen themselves in the Kurdish lands of northeastern Syria. And if this works out, the American plan will start working for Moscow - by controlling the Kurds, the Kremlin will receive an additional lever of pressure on Ankara.

But if Turkey gets everything that it wants, Russia in Syria will simply not be needed ...

Of course, we must not lose sight of the fact that the withdrawal of American units from Syria has not yet taken place. Alas, it can be suspended at any time, or even completely terminated. But now this may be another trump's internal political problem - the Democrats will not miss a chance to remind voters that it was they who opposed such a decision, and they would surely be able to beat the indecision of their sworn enemy in the media. Therefore, the study, conceived by Trump and his administration, with a not too good game, may turn out to be a trap into which the American strategists have driven themselves.

On the other hand, if Moscow and Ankara manage to quarrel quickly enough, and then leave the American troops in Syria (and the reason for this can always be found, especially against the background of aggravation of relations between the former partners of the anti-American coalition), we can state that The White House was completely successful, and the retreat was drawn by the Americans almost flawlessly.