Alexander Bestuzhev-Marlinsky. Decembrist, who fell to the glory of the empire. Part of 3

January 3 2019
6
Since 1834, Alexander lived in a state of constant march, which began with the expedition Velyaminova. Only Bestuzhev had to winter in Stavropol or Ekaterinodar. Spring, summer and almost all of the autumn the exiled ex-officer was in the expedition detachments operating in Zakubanie, up to Sukhum. Especially heavy were expeditions to the Black Sea coastline.


Trekking and tent life were not sugar in themselves, and the local Circassian tribes made any ascent to the mountain range a real assault. Thus, the whole sunny day, the detachment waddled through the mountain thickets and forced the rivers, and at night the fighters managed to sleep only a couple of hours. But the dream was nervous and painfully sensitive, with every minute waiting for the next attack or attempt to drag someone into captivity for ransom or sale into slavery. The dexterity of local tribes in the conduct of such a guerrilla war was at a high level. 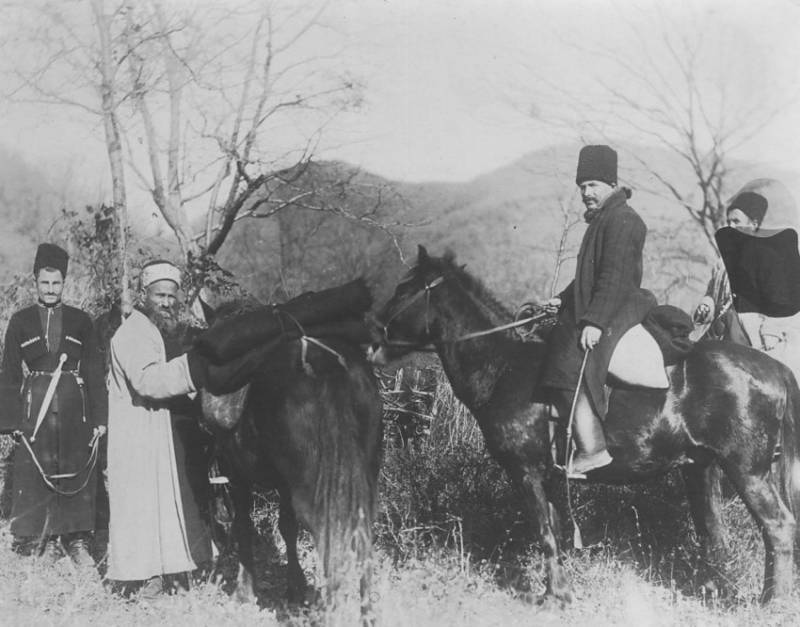 Shapsugs living southeast of Tuapse, photo of the second half of the 19 century

Even experienced in the Caucasian wars, Bestuzhev, who fought with the Turks, and Lezgins, and the Avars, recalled the local Circassians with the following words:
“I saw a lot of mountaineers, but, to admit, I didn’t see a Shapsug better (a tribe living in coastal and mountainous areas from present-day Novorossiysk to Sochi); they have comprehended the highest degree of harming us as much as possible, being as much as possible harmful. ”

Here also the nature of the conduct of hostilities was influenced by a number of specific preferences of the Shapsugs in battle. So, Shapsugs loved to rush into saber attacks, first coming close to our fighters and unnoticed. Vasily Nemirovich-Danchenko, born in Tiflis and better known for his kinship with the great playwright Vladimir, traveled all over the Caucasus and later wrote about shapsugs: “They said about them: shapsug doesn’t like to burn a lot of gunpowder, shabsug shabak, like Abadzikh shooters”.

But even in a difficult situation, Bestuzhev remained Bestuzhev. Therefore, being in difficult marching conditions, Alexander was open to the most dangerous adventures, especially if they lay down in the fabric of his romantic works and their heroes. Thus, in one of the velinamin trips, Bestuzhev found out about a local robber named Mulla-Nur, who hunted in the area of ​​the modern Tenginsky gorge (now better known for its beautiful waterfalls). But not the unpretentious "business" of a gangster from a large road attracted Alexander's attention.

Local residents told Bestuzhev that Mulla-Nur is not just a gangster, but a real mountain Robin Hood. The robber either imposed a kind of "tax" on any passing rich man, or completely stripped him completely, but the expropriated things, whether grain or gold, gave to the poor peasants, for which the latter respected and loved the Tengin robber. Naturally, Alexander, who was flaming with ideas of equality, could not pass by a rather unusual robber, who against the background of the war led his “battle” with social inequality. Bestuzhev, armed with pistols and a familiar dagger, was able to obtain permission to go to the mountains in search of Mulla-Nur. Of course, many fellow soldiers accompanied him as if on the last journey. 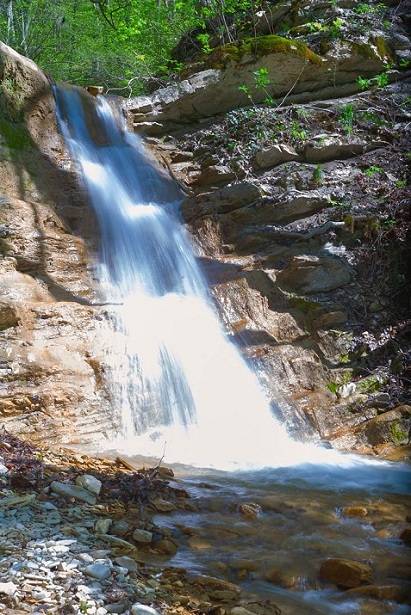 But Alexander not only returned alive and unharmed, which seemed unthinkable, but also made friends with the robber and became his kunak. Despite the suspicious acquaintance, the authorities in the face of Velyaminov looked at this strange priesthood through their fingers, since Mulla-Nur officially did not take part in the war against the Russian troops. In 1835-36, Bestuzhev will complete a work entitled “Mullah-Nur,” written in his romantic, sublime manner.

We should also mention the artistic and partly documentary works of Alexander Alexandrovich. Let us leave behind brackets their artistic value and grace by the possession of the word, because for the modern man his prose will seem ponderous, pretentious, and sometimes simply lexically incomprehensible. And more than once the reader will have to open the Dahl dictionary, and, perhaps, the Brockhaus and Efron encyclopedic dictionary. But it is extremely difficult to argue with one thing - he made a good contribution to the description of the customs and customs of the Caucasus (both noble and the most anti-human), architectural and fortifications of the region, as well as history Caucasian war.

In 1834, Bestuzhev’s once-strong health suddenly began to falter. Years of stale, and sometimes simply rotten, food, cold, interspersed with heat, and desert dryness, replaced by tropical moisture, and, of course, endless kilometers of Caucasus roads made themselves felt. When the expedition reached Gelendzhik, Alexander ached so much that the commandant of the fortress, Colonel Tchaikovsky, who lived in the only real house with glazed windows (extraordinary luxury in a virtually earthen town), sheltered him for some time in order to improve the health of the famous writer. In this case, his fame, which reached even to these outposts of the empire, temporarily helped him out. 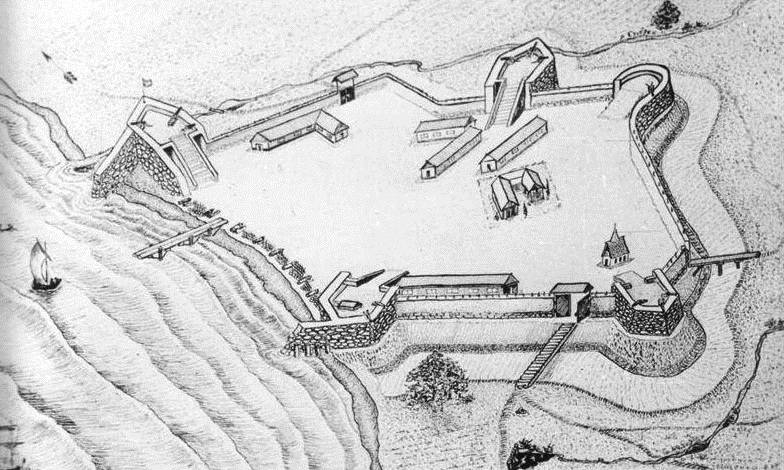 Wintering was held in the Stavropol region. And then the consequences of the Caucasus climate Bestuzhev finally knocked down. Alexander had more and more seizures, a migraine prevented him from falling asleep, and insomnia was replaced by unconsciousness. Sometimes he began to rush around the room in the middle of the night, unable to either sleep or to relieve the pain. In January, Bestuzhev’s 1835, judging by the descriptions of his contemporaries, had a severe seizure similar to a heart attack:

“He lay down at eleven o'clock with a headache, fell asleep and suddenly jumped up, as if struck by lightning. His head was spinning, his heart was beating, as if it were ready to burst, the blood hit his head. He cried out in horror and began to choke, rushed into the hall to capture fresh air, but everything was in vain: the pulse disappeared, the heart fell silent, and only the head was still clear. He experienced four such attacks in one night, but by morning it became easier for him. ”

In the summer of 1835, officers familiar with Bestuzhev saw all the decline of his forces, despite the omnipresent bravado of Alexander, who sometimes continued to live the role of heroes of his works. Therefore, acquaintances (some sources believe that the Veliyaminov’s protection helped in this case) attached a writer to Pyatigorsk with the goal of improving his health. And, it would seem, everything was going well. That summer, Bestuzhev was given the rank of non-commissioned officer. And, finally, the hope of an ambulance liberty faintly shone. Alexander contented himself with the thought that assigning him the next rank suggests that they no longer see the enemy in him and are treated with confidence. But these were vain dreams.

As soon as the court learned that they didn’t ignore Bestuzhev’s merits in the Caucasus and assigned a new rank, they immediately ordered to “test” the exiled noncommissioned officer. For example, Count Alexander Benkendorf (founder and head of 3-his department of His Own Imperial Majesty's office) wrote to General Grigory Rosen that the emperor ordered "suddenly to inspect all the things and papers of Bestuzhev and about the subsequent report to His Majesty." 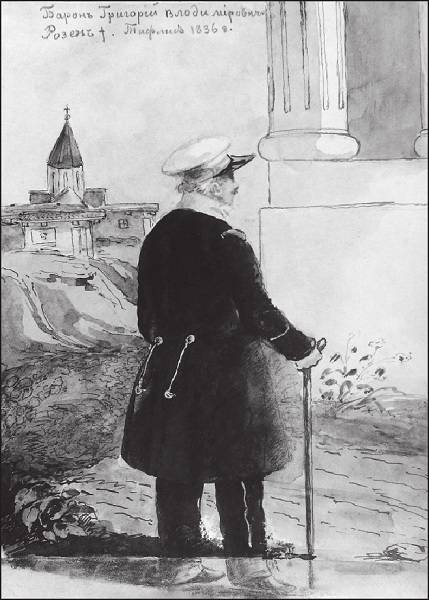 The gendarmes broke into the house where Bestuzhev lived at 5 in the morning. Despite the fact that the gendarmes turned the house upside down, nothing forbidden or reprehensible could be found. With Alexander, in the end, they took a subscription to not disclose an unexpected visit. However, it is worth noting that Baron Rosen himself, along with the answer about the search, also wrote down in all details about Alexander Alexandrovich’s serious illness, burdened by sorrowful wounds, i.e. scurvy.

Despite this, by the end of summer - the beginning of autumn, he returned to the Tengin regiment, and another expedition followed, after which Bestuzhev wrote to his brother:
“I'm tired from the last expedition to the most impossible. My God, what the weather! Imagine that within two weeks we had not two hours dry! Rain, rain, hail ... I was so dried up by fever that I could be inserted into a lantern instead of glass. ” 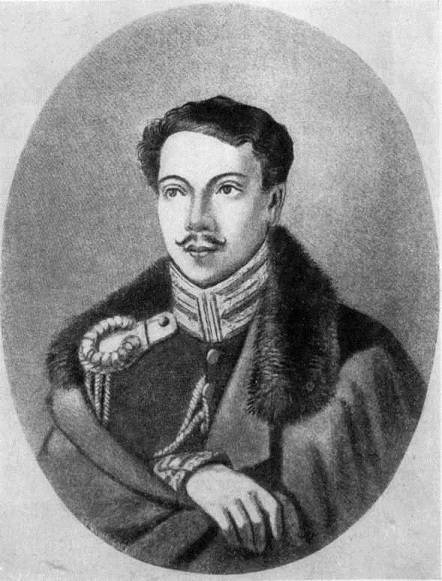 Alexandra also thought that he was now an eternal non-commissioned officer, and the rank itself was an evil mockery of his hopes. He took the search in Pyatigorsk very close to his heart, and soon rumors began to reach him that the imperial court did not want to see him as a writer and categorically forbade Bestuzhev to be transferred anywhere except to another Caucasian foot battalion. Alexander Alexandrovich increasingly broke into open paranoia, in which he was difficult to blame. After all, more than one idea to awarding Bestuzhev with the Cross of St. George fell under the cloth.