Russia is going to take away the right to the Arctic 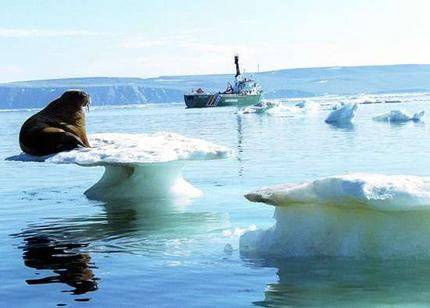 The great European tour of US Secretary of State Hillary Clinton brought her, including to Norway. Here, she decided to visit in addition to the capital of this northern European state also the small 70-thousandth town of Tromsø, whose name immediately sounded in various world media. Not only did the whole world know that the Arctic, it turns out, has its own capital (the very Norwegian Tromsø), so also once again everyone heard from the mouth of the US Secretary of State that the Arctic belongs to all mankind, and it’s time for all countries to start and here, “sow the world” and implement the fundamental agreements on environmental protection. By the way, many of these agreements were not ratified by the Americans themselves (for example, the Kyoto Protocol), but for Hillary Clinton this was no longer important.


Such words could well go unnoticed, you never know what this American state lady says, if it were not for several "but". First, it seems to be the Arctic Council, which was formed in 1996 year, and represents the interests of seven member states: Russia, Canada, Norway, USA, Denmark, Iceland, Sweden and Finland, which are already quite active in fighting for the Arctic . Secondly, if the Arctic is assigned the status of a territory that is common to all world states, then the number of people willing to “surf” in search of rich deposits will obviously increase, and here it is unlikely that anyone will pay attention to environmental safety issues. Why should China care about the cleanliness of the Arctic, if China itself is far from it, and the resources do not smell ecology ...

Although at the same time, Mrs. Clinton’s words about what she actually considers the Arctic to be a global treasure can be considered nothing more than slyness. It's just that in the United States it is clearly understood that today Russia is representing too much force in the Arctic. The active development of the shelf by the Russian Federation is clearly not part of the plans of the West, so the United States decided to play its new card. This map looks exactly the same as giving the Arctic a seemingly innocuous status of "global space." In fact, Washington is absolutely not ready to go to the fact that companies from countries that are not geographically affected by any of the Arctic began to work actively here. Initially, of course, in the Arctic, for example, German or French companies may be admitted for external demonstration of good goals, but the final idea is to knock the soil out from under Russia’s feet in the Arctic territory. In other words, Hillary Clinton’s tirade about the Arctic as a global treasure reveals a completely different meaning: “The Arctic must remain a territory of US interests and escape more and more from Russia’s hands.”

And, we must pay tribute to the Americans, they strive to fulfill their plans on schedule. That only costs an increase in the number of US military contingent in Alaska. In addition to the largest US missile defense positional area, there are motorized infantry and airmobile brigades, five fighter squadrons, a number of coast guard ships, and in the early spring of 2012, deliveries of the upgraded F-22 Raptor fighters for the Elmendorf-Richardson base began here. At the same time, with the active support of the UK, which itself is only an observer of the Arctic Council, Canada is militarizing, with which the NATO countries are making a big bet in the Arctic region. According to statements by Canadian Prime Minister Stephen Harper, in the near future new military training centers for conducting military special operations in the Arctic will appear in the Arctic territories of Canada. In Baffin Land, Canada plans to build a new military base, which will be the main control point for incoming ships in the Arctic Ocean and going back. But that's not all. Canada, with active "sponsorship" assistance from NATO comrades, is planning to build a group of nine ships to patrol the Arctic zone. It is planned that all nine patrol vessels will begin their arctic activities as early as next year.

However, despite all the proposals that Canada makes from Britain and the United States regarding the social status of the Arctic, Ottawa has its own opinion on this subject, which, to put it mildly, does not quite coincide. Canada, by the way, and the Russian Federation, believes that the Arctic should be divided on a sectoral basis. It would seem quite sensible thought. Only here, with these sectors, Canada is somewhat one-sided. One example of Canadian "sectorality" says that even the North Pole has a master, and, as you might guess, since we are talking about the Canadian interpretation, then this master is Canada in person. That is, Ottawa’s position is very, very specific: to take part in NATO exercises, to receive financial and moral assistance from the United States and Great Britain, but at the same time try to stick a flag with a maple leaf into that very North Pole bases, to control the movement of each seal (not to mention the polar bear) ... But would the American brothers give the "maple leaves" such a chance to roam the endless expanses of the Arctic? Certainly not. Just today, the Americans need Canada as an obvious springboard for their expansion into the Arctic, since with Alaska alone, to keep such vast territories even if there are special objects (missile defense) there obviously will not work.

That is why Mrs. Clinton had to implicitly hint to Mr. Harper that American support in this case (as, indeed, in any other) is not at all gratuitous.

Now it is worth a little closer look at the issue of NATO exercises in the Arctic region. This is especially important in light of the fact that the Arctic, it seems, has been declared demilitarized by the region. Only if such a status today someone on the other side of the ocean can confuse. That is why the exercises, which were held by joint NATO forces in the north of Norway in March of this year, collected more than 16000 troops. The name of the “Cold Answer 2012” exercise and the direction “Testing the actions of NATO troops in winter conditions” clearly made it clear who this kind of maneuvers could be directed against. Well, not against Iran or North Korea, in the end ... Korea, although it is North, but somehow it will be far from Norway ...

It turns out that the words of Hillary Clinton that it is time to start “sowing the world” in the Arctic quite clearly determine for what purpose all such large-scale exercises are held. But the goals are the same - to show Russia that it may have to reconsider its plans for the development of the Arctic shelf. By the way, it should be recalled that the West became so actively interested in the “commonality” of the Arctic after Russian scientists, using deep-sea vehicles, outlined the borders of the continental shelf belonging to Russia and installed the Russian flag at the bottom of the Arctic Ocean, stressing that our country does not support opinion on the right of any state of the world to the Arctic wealth.

Well, after all, in fact: if the United States is trying to declare the Arctic a supra-state entity, the right to exploit the subsoil of any country in the world, then why shouldn't Washington start by giving this status, for example, to the Gulf of Mexico or Alaska ... Give the demilitarized zone from Florida to Yucatan, with the right, for example, of Russia and China to develop local resources! .. Yes, and the capital for this "universal" zone can be determined: why is Caracas not suitable?

In general, despite all the statements of the US Secretary of State, Russia should not retreat a step from its Arctic strategy, worked out before the 2020 year. And here, among other points, includes such a provision as “upholding national interests and strategic priorities (in the Arctic) in strict accordance with the legislation of the Russian Federation”.

Ctrl Enter
Noticed oshЫbku Highlight text and press. Ctrl + Enter
We are
Results of the week. “In our cooperative, the board is always agreed”Memo to mercenaries in Africa
Military Reviewin Yandex News
Military Reviewin Google News
171 comment
Information
Dear reader, to leave comments on the publication, you must to register.