January 9 2019
8
Some modifications of the Luger / Parabellum self-loading pistol were completed with a wooden holster-butt with which it was possible to improve the accuracy and accuracy of fire. However, this device was distinguished by its large size and weight, which to some extent made it difficult to operate. weapons. A curious way to solve ergonomic problems in the early twenties was developed by German gunsmiths Friedrich Goman and Wilhelm Grunov. They suggested using a lightweight butt with a pistol.


Most of the holster-butts for the "Luger" had a similar appearance and differed little from each other in terms of design. In addition, they had common problems with ease of use. From time to time, various solutions were proposed for solving such problems, including the most interesting ones. In particular, one of the projects proposed to abandon universality and make a compact device that solves only one problem, but with maximum efficiency.

A new version of the butt for the Parabellum pistol was developed by German gunsmiths Friedrich Goman and Wilhelm Grunov from Berlin. Apparently, the work on the creation of an accessory for weapons started at the very beginning of the twenties. In April, 1924, the designers applied for a patent, and soon their priority in the invention was documented. The subject of the patent was designated as “Ansetzkolben für Pistolen” - “Removable butt for pistols”. In the future, this development is known under the name derived from the names of its creators - Gomann-Grunow.

It can be assumed that the development of a new butt was preceded by a search for optimal ideas and solutions. Further improvement of the wooden holster-butt did not make sense, because such a device, by definition, could not be different compactness. At the same time, the accessory's ergonomics could be improved by rejecting universality. A simple removable butt could have a small size and weight, but at the same time fully solve all their problems.

A characteristic problem of the existing holsters was the large size that made them difficult to carry. In the case of a simple butt, you could use certain resizing tools. In addition, the designers found the opportunity to use ready-made devices borrowed from existing projects. However, this approach had some drawbacks. So, for carrying the butt could require a separate pouch or other device in addition to the holster for the gun.

Butt Goman-Grunova had to have a telescopic structure, composed of metal parts of a simple structure. The principles of mounting the butt on the weapon was proposed to borrow from serial products. Due to this, the butt turned out to be compatible with pistols having corresponding slots on the handle. Thus, unlike some other removable buttstocks of the original structures, the telescopic model did not require any modifications to the pistol with which it was planned to be used.

The main element of the Goman-Grunov butt, combining all the other parts, was a telescopic system of two tubes. Elliptical tubes were used; they were oriented so that the major axis of the ellipse was located vertically. External and internal dimensions of the tubes were selected in a special way. The smaller front tube was free, but without large gaps it entered the second one. On the basis of the tubes, it was proposed to assemble two units that were connected to each other.

The first unit included a tube of a larger section, on one of the ends of which, with the help of a triangular insert, the butt plate was fixed. The latter was a curved metal plate of small size. The height and width of the butt plate was determined on the basis of the requirements of reducing the dimensions of the butt and at the same time ensuring the convenience of handling weapons. In the front and back of the tube, two pairs of round holes were used, which were used by the lock. From the bottom of the outer tube there was a long groove for the stop, which did not allow the inner one to excessively move forward and fall out. 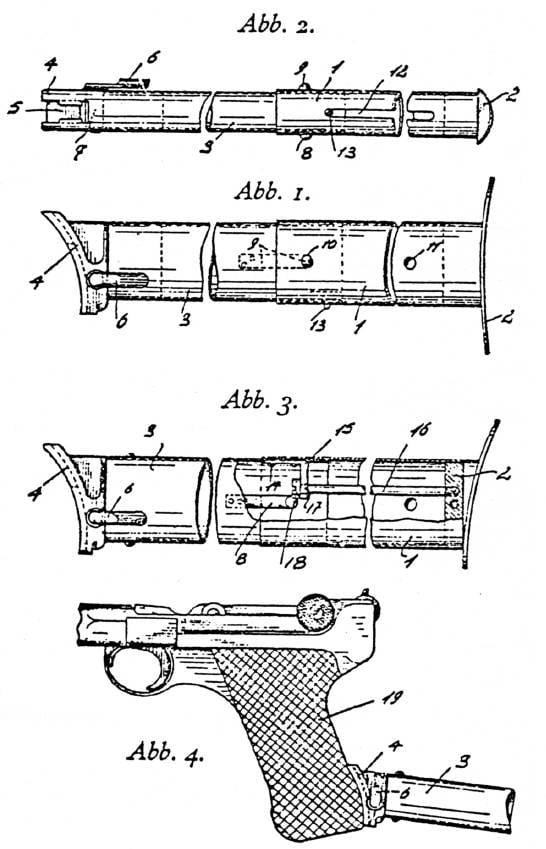 The inner tube of the telescopic butt had a different diameter and tightly entered the outer. At its front end, it was proposed to mount the lock for installation on the Luger pistol. Near the rear end there were two holes on the side walls. Under these holes, inside the tube, there was a pair of leaf springs with hemispherical protrusions at the ends. The latter passed through the holes of the tube and were responsible for fixing it in one of the required positions. Below the tube there was a protrusion-limiter, holding it inside the outer "casing".

The lock for mounting the butt on the gun was designed specifically for the new product, but it was based on already known ideas and solutions. To a certain extent, it resembled the devices of serial holster-butts of existing models. Due to this, the butt could be installed on any pistol having a regular holster-butt without modifying its design or without installing additional devices.

The main part of the lock was the case with a curved front part that had the desired profile. In the groove between the L-shaped side parts of the lock with a little tightness included a standard mount gun. Below in the castle there was a transverse channel in which there was a latch. The latter was controlled by a turning lever. Turning the lever forward opened the lock, and translation into a horizontal position fixed the butt on the gun. The lock case had a cylindrical shank. He entered the inner tube of the stock and was fixed with a screw.

The original product Ansetzkolben für Pistolen could be transported in different ways: in different pouches, in the compartments of another holster, etc. In addition, the project included a suspension of the butt on the belt. For its fastening on the butt plate, in the front below, a small U-shaped bracket was placed. Such an attachment of the belt provided acceptable ease of transport, but did not prevent its use.

In the transport position, with the telescopic tubes moved, the Gomann-Grunow butt had a length on the order of 210 mm. At the same time, a significant part of the length fell on the butt pad and the lock: the own length of each of the two tubes did not exceed 160-170 mm. After moving to the working position, the butt length was increased to 330 mm. Such its dimensions provided an acceptable convenience of working with a gun. The height and width of the product were determined by the dimensions of the plate butt plate and did not exceed a few centimeters. 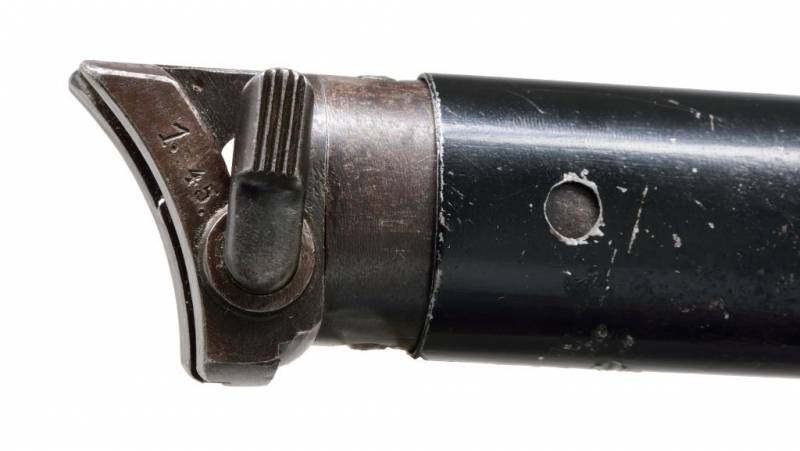 The lock for installation on the gun. Photo Poulinantiques.hibid.com

The original butt was proposed to be transported, removed from the pistol and folded due to its telescopic design. At the same time, the inner tube was fully inserted into the outer one. A pair of protrusions on the springs of the inner tube passed through the holes in the latter, and then fell into the rear holes on the outer tube. The springs did not allow the parts of the stock to move along the longitudinal axis of the product.

Before shooting, the butt should be installed on the gun. With the lock open, it should be pushed onto the corresponding protrusions of the pistol grip. Then the lever rotated around its axis, which led to the fixation of the stock. Butt in the folded state had not too great length, which did not provide great convenience of shooting. Therefore, after installing it on the gun, it had to be decomposed.

For the layout of the Goman-Grunov butt it was proposed to push protruding spring heads into the outer tube. After that, it was possible to push the inner tube forward. The course of the tube was limited to its own protrusion. With its extreme forward position, the spring heads could fall into the second set of holes in the outer tube. After that, the butt was fixed in the extended position and provided an acceptable ease of shooting. From the point of view of use in shooting and ergonomic features, the Ansetzkolben für Pistolen product was no different from other pistol butts. 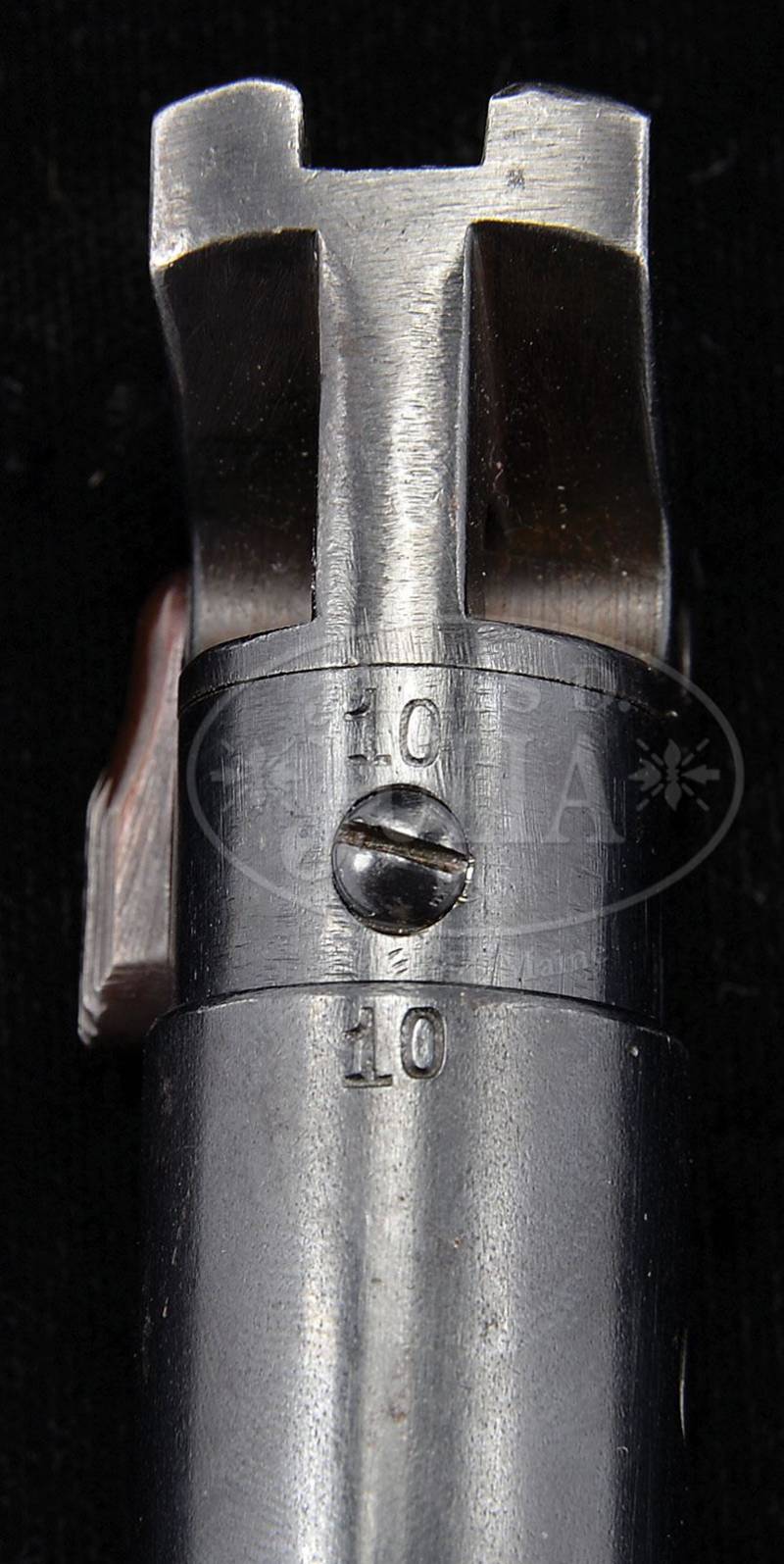 Castle, view from above. Photo of Morphyauctions.com

In 1924-25, F. Goman and V. Grunov organized the production of new accessories for common weapons. However, apparently, the release of butts did not last too long, and they did not have commercial success. As a result, most of the information of a production nature, as well as sales data is missing. Nevertheless, the available information, which is fragmentary, shows that the original development could not become a real replacement for the existing holster-butts.

Whether new butts were offered to the Reichswehr is unknown. However, even if the German military received such an offer, they did not approve it and order original equipment for pistols. You can understand why the butts of Goman-Grunov did not have a chance to go into service. The project of two gunsmith enthusiasts proposed to abandon the universal device in service, which solves two problems at once, and this drastically reduced its prospects in the context of the army. In addition, in the mid-twenties, the German armed forces had constant problems with financing, which excluded mass purchases of not the most necessary devices. 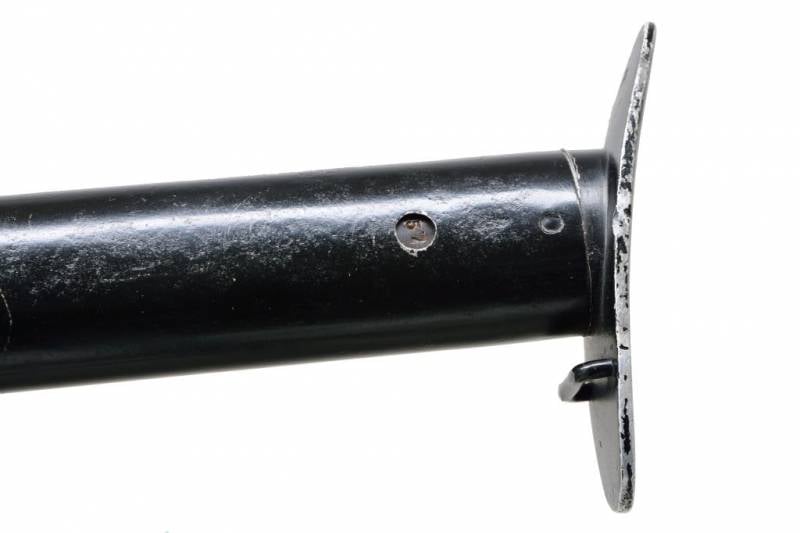 The back of the telescopic system and the back plate. Photo Poulinantiques.hibid.com

According to some sources, the Goman-Grunov stock was offered to amateur shooters. Such an audience might be interested in a new development, but also did not meet expectations. The economic situation in the country at that time did not contribute to the commercial success of small arms companies. In addition, in the civilian market, the butt of a new design would have to compete with existing serial products.

As a result, the company of F. Goman and V. Grunov produced only one batch of telescopic butts, not distinguished by a large number. Some sources claim that no more than ten such devices were manufactured. In other literature, it is suggested that several dozens of products. The second version is indirectly confirmed by the fact that the remaining butts have two-digit serial numbers, which, moreover, do not go in order. 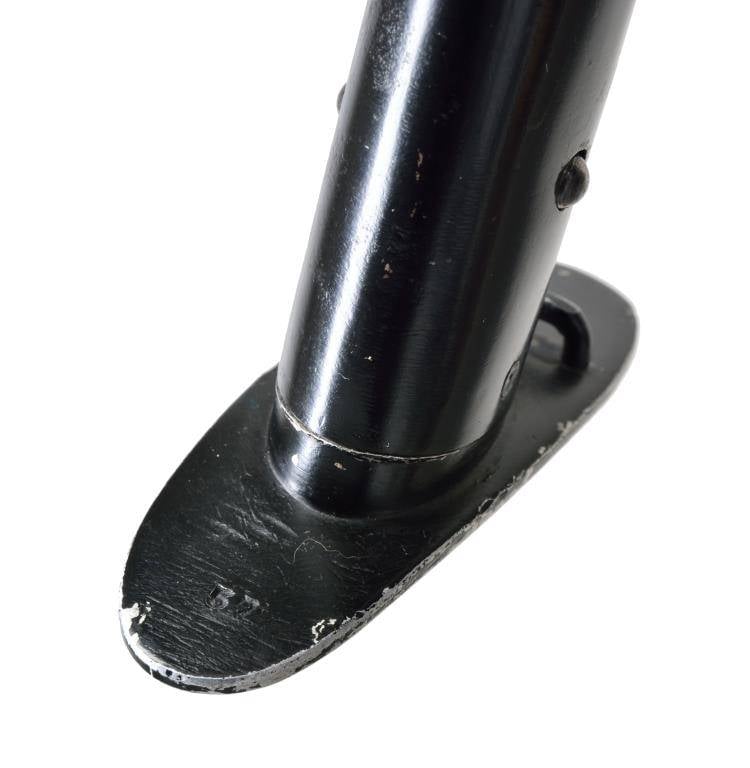 The fate of the majority of butts from a single party is unknown. Apparently, they still found their customers and were used together with compatible pistols. As they exploited, they could break down and go to scrap. As a result, up to our time no more than 4-5 Gomann-Grunow butts survived. All of them are stored in private collections, but from time to time appear at auctions. A rare and unique accessory for weapons attracts the attention of collectors, as a result of which the total cost can go up to 4-5 thousand US dollars.

A number of modifications of the Parabellum / Luger self-loading pistol were completed with a removable butt, made on the basis of a holster. Such devices improved the accuracy and accuracy of fire, but did not fully suit the users. As a result, various new designs appeared to replace uncomfortable wooden holsters-butts. Some of these devices - for example, the construction of Friedrich Goman and Wilhelm Grounov - were simple and elegant, and could effectively solve their problems. However, the fate of the project of German inventors ultimately affected a number of factors. Buttress Gomann-Grunow did not achieve the desired success and eventually moved into the category of valuable collection rarities.