December 28 2018
30
As noted earlier, the dates of Christian holidays, and especially of the Nativity of Christ (even in Western terms), for some reason do not allow various terrorists to sleep, from Islamist jihadists to anarchist atheists. And yesterday, December 27 2018, the day of St. Apostle John on the Catholic calendar, on the eve of a very important day in Catholicism to commemorate the babies killed by King Herod, when the souls of all the dead babies are commemorated, in the Austrian capital Vienna unknown people staged an attack on the church.


Как transmit Western media, "a group of people of eastern appearance, armed with knives and gunshot weaponsacting as brutally as possible, around 17: 00 attacked the Catholic Church of the Immaculate Virgin Mary ”, located in the Floridsdorf district, in the northern part of the city.

According to information published in the media, during the attack suffered from 6 to 15 people from among the parishioners gathered for religious service, and the monks who tried to protect sacred objects. Several Catholic priests and monks were taken hostage by the criminals, they were only able to free them from the police officers who arrived.

Despite the fact that the preliminary police in Vienna considers what happened to be a criminal attack to rob people gathered in the temple and steal church property, it confirms that the attack was apparently made by Islamic radicals from among immigrants for whom the Christian church is not a sacred territory.

According to some reports, the criminals who attacked the temple were prevented by a fairly rapid reaction of the Vienna police. She unexpectedly quickly arrived at the scene of the crime, causing panic attacks on the attackers. 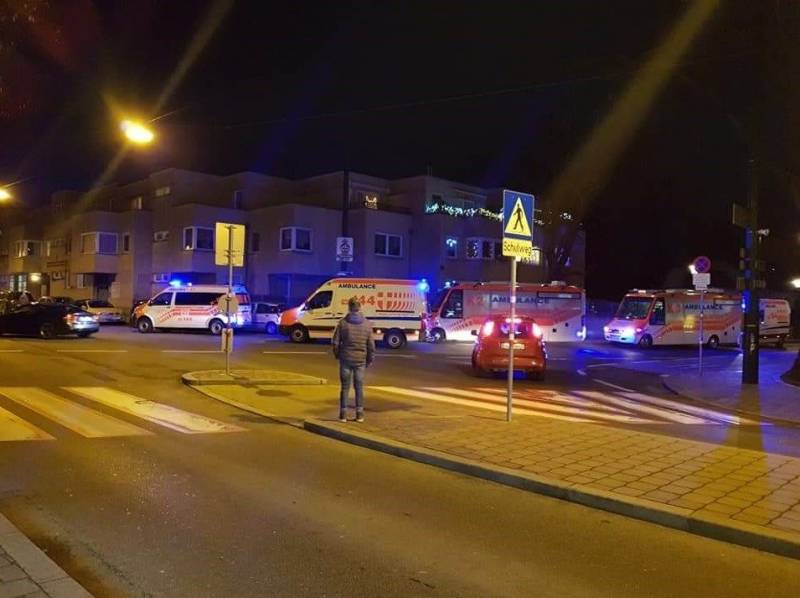 Police and ambulances near the site of the attack on the church in Vienna. Photo source: www.oe24.at

However, the attackers managed to escape. At present, a plan of interception operates in Vienna, and in favor of the fact that the version of the terrorist nature of the attack is not excluded, the fact of participation in the search operations for criminals of such Austrian anti-terrorist units as Cobra and Wega testifies.

Perhaps the attack on the Catholic Church in Austria is linked to the recent arrest of a group of Islamic radicals in Sweden who were preparing a major terrorist attack.

In addition, yesterday, December 27, in Europe there was a second attack on the Christian church, this time on the Orthodox. how transmits “Euronews” TV channel, in the capital of Greece, Athens, at the entrance to the temple of St. Dionysius, near 07: 00 in the morning of last Thursday, an explosive device went off.

Apparently, the bomb was with a timer, set specifically for the time when, before the beginning of the liturgy, believers gather in the temple, passing just through the main gate. Mass victims were avoided only because of the vigilance of the church watchman: he noticed a suspicious object in a metal box at the entrance to the church, warned parishioners about a possible threat and called the police.

The explosion occurred at a time when the police outfit arrived at the church and one of the law enforcement officers began to approach an incomprehensible subject. As a result, thanks to the timely detection of an explosive device and the cordoning off of the territory, only two were injured - a policeman and a church watchman, who, without waiting for the sappers, went to inspect an incomprehensible object, but, fortunately, they still did not have time to approach him at close range.

According to Fr. George, rector of the church of sv. Dionysius, no threats or warnings about a possible terrorist act he did not receive. While responsibility for the explosion, clearly qualified by the Greek police as a terrorist attack, none of the extremist groups have taken it upon themselves.

Kolonaki’s Athens area, where the above church is located, is quite rich, but the Exarchia area, marked by opposition from anarchists and the police, is next to it, and therefore unofficially, the Greek security forces are talking about possible involvement in the explosion of not only Islamic radicals, but also local anarchist atheists from extremist groups.