When people think with their head. An example of a correct ocean patrol ship

December 28 2018
294
The joke about something in a healthy person and the same in a smoker becomes a surprisingly metaphor when it comes to patrol ships. About how it looks "Smoker patrol boat"has been said before. Now, as part of a detailed study of someone else's experience, it makes sense to look closely at the “patrol ship of a healthy person.” For comparison. 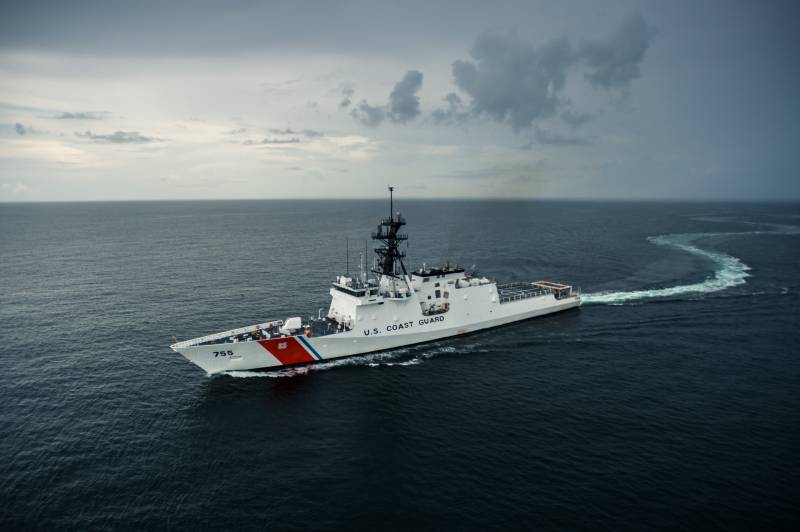 Speech in this case will go about the ship of the US Coast Guard class «Legend». This is the class of the largest ships in the service of this structure.

History These patrol ships began in the 90-ies, when the command of the Coast Guard came to the conclusion that the naval and aviation fleet in service is hopeless. It must be said that the victory in the Cold War was not easy for the Americans, including at sea. Until the Soviet Union collapsed, the Coast Guard had to be content with very miserable compared with the Navy financing. According to the assessment made in 1993, the 207 of the aircraft and the 93 of the ship did not correspond to the changed threats, were physically worn out, had a high operating cost due to permanent breakdowns and, as a result, had to be replaced. By 1998, the Coast Guard finally decided on their needs, and sent out a request for quotations concerning the new technology to interested companies.

We will not go into details, but in 2002, the consortium Integrated Coast Guard Systems LLC (Coast Guard Integrated Systems LLC), the creature Northrop Grumman and Lockheed Martin, signed a contract for 20 years, worth 17 billions of dollars. In 2005, the contract was revised, taking into account the new requirements for the Coast Guard, which stemmed from the wars launched by the United States as part of the so-called “Anti-Terrorism”, its value increased to 24 billion, and the maturity date increased to 25 years. The program eventually received the name “Integrated deepwater system program” (“Integrated systems for“ deep waters ”- this is what the US Coastal Defense Administration calls operational areas, further 50 nautical miles from the US coast), or simply“ Deepwater program ”.

The new long-range patrol ship was one of the key points of this program.

The first set of requirements for the new ship was formed in 2002, and in 2004, it was expanded and finally frozen. A year later, the first ship, the Bertholf (Bertolf), was laid down at the shipyard of Ingalls Shipbiuilding (Ingalls Shipbuilding), in the state of Mississippi.

Ships were built quickly. The Bertolf was launched a year and a half after the launch, and 2008 was commissioned in the summer. The remaining ships of the series were built approximately as quickly. The time from laying to launching never exceeded two years, and the full period of construction and delivery from laying to launch did not reach four years, usually remaining within three years and several months.

In the construction of two more - "Midgett" ("Midgett) and" Stone "(" Stone "). And a couple more ships that do not have names in the order. In this case, the series may increase.

The ships initially had problems. So, on the first three ships of the series, then it was necessary to strengthen the hull, and the Stratton also had problems with corrosion and leakage, which also had to be fixed. In addition, in 2018, Lockheed became involved in the lawsuit for concealing the fact that some of the communications equipment supplied to the Customer was not working as part of the program - the equipment could not send and receive signals simultaneously at different frequencies, although this was stipulated by the contract. Lockheed fixed and paid 2,2 a billion dollar fine. Amusingly, the loss of the corporation for the repair of connected equipment and the amount of the fine were the same.

According to public information, all technical problems on ships are now fixed.

The ship was originally conceived of dual use, and that was how it was created. The design, measures to ensure survivability, hull strength and redundancy of the systems on the ship basically meet the standards of the US Navy, that is, the ship’s warship almost completely complies with the strength and survivability. Only steel is used as superstructure and hull materials. Measures have been taken to reduce the effective scattering area and ship visibility in the radar range.

Initially, it was planned that in conditions of low risk (the enemy is poorly armed and trained, has a small number of coastal patrol ships, and very few anti-ship missiles), the ship will be able to carry out most of the typical US Coast Guard operations and successfully repel attacks against themselves. Operations in conditions of low risk include: self-defense and protection of the entrusted water areas, objects and territories in the theater of operations, escorting ships, protecting ports, intercepting ships at sea. In conditions of medium risk (the enemy is armed with anti-ship missiles, a number of aircraft and submarines, has a network of radar stations and controls the coastal zone), the ship is charged to be able to carry out actions for self-defense, fire at the coast and evacuate non-combatants. In conditions of high risk, where there are chances to be attacked by an enemy with developed and combat-ready armed forces, the ship cannot and should not act in the base case. In this case, in the event of an "emergency", the ship must be able to work together with the ships of the US Navy using the Link-11 tactical data transmission system, which it is equipped with.

The ship has data transmission systems that are fully compatible with those of the US Navy and can operate with them in a single automated control system.

The ship is equipped with:

Initially it was planned that the ships would be able to install anti-sabotage and anti-mine GAS sometime in the future, in case of war, however, the growth of the terrorist threat forced the US to start a ship modernization program, code-named RESCUE 21 (“21 Rescue”). According to this program, ships will receive data transmission systems that allow tactical information to be exchanged with chiefs of seaports, a GUS capable of searching for mines and combat swimmers will be installed on each ship, all machine guns will be replaced with remote-controlled ones, and their sighting systems will be integrated into the shipboard CES , and the shooting of machine guns will be able to be made by targeting both the radar and the optical-electronic systems of the ship. According to the authors of the modernization program, the presence of GUS will help fight the terrorist threat in the ports, and the automation of machine gun targeting will shoot the boats with suicide bombers going to the ship, including from different directions simultaneously. Some ships have already been upgraded.

In the basic version of the weapon of the ship are: 57-mm automatic gun Bofors Mk.110, with a rate of fire to 220 rounds per minute. The gun has ammunition in the ammunition with a programmable detonation, and can be used against air, surface and limited ground targets. Also, the ship is armed with 20-mm anti-aircraft artillery complex "Falanx", the artillery installation of which is installed on the roof of the helicopter hangar. In addition, the ship is armed with four 0,50 caliber machine guns (12,7 mm) and a pair of 7,62 mm machine guns.

However, it is a peacetime weapon. In the event of participation in hostilities in conjunction with the US Navy, a constructive provision is made for the rapid replacement of the Phalanx installation with RIM-116 launchers Also, the ship can be very quickly equipped with PU anti-ship missiles (astern above the slip), and, according to open sources, “mine warfare”. It is indicated that for this purpose the ship provides for both the appropriate places and the necessary power supply.

Aviation armament of the ship in a typical embodiment is a single multi-purpose helicopter. However, there are two hangars on the ship, and when carrying out anti-terrorist operations, it is envisaged that there are two helicopters on board. 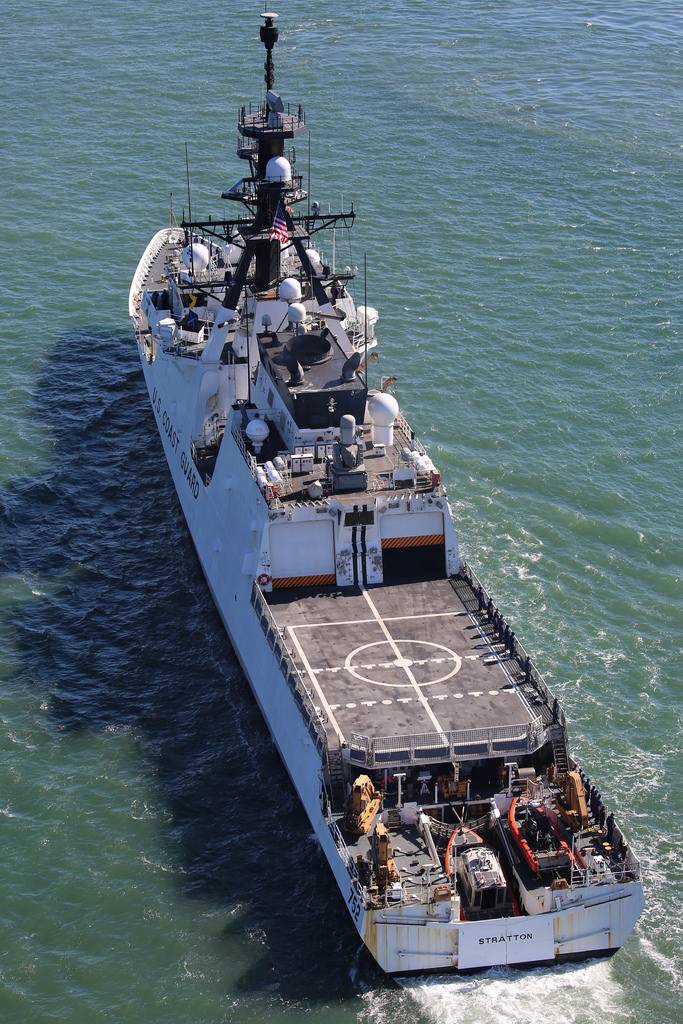 There is enough space on the ship to accommodate the special forces detachment and various additional personnel, as well as the rescued hostages.

In the near future, a typical helicopter armament will be one helicopter and two vertical UAVs.

Behind the landing area, the ship is equipped with a launching-receiving area of ​​boats, consisting of a deck on which cranes and a short-range boat (optionally two) are located, and a slip in the center of the deck from which the long-range boat is launched . The launch of the boat from the slip and its return is allowed on the move. 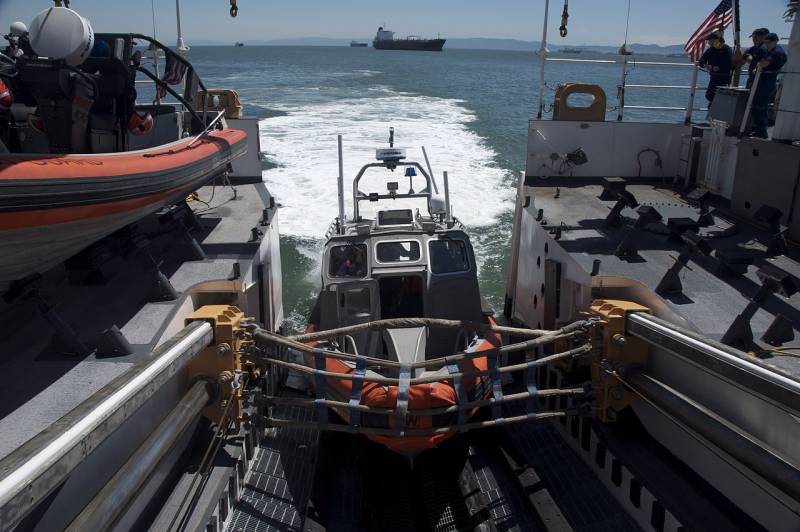 Another small boat is on the launch-lift device on the right along the board near the gas turbine ducts.

The US Coast Guard operates without bases around the world, autonomously, and therefore the ship can be at sea for a long time. A normal supply of food on the ship provides autonomy for up to sixty days, and in the transshipment variant up to ninety. Cruising at economic speeds is 12000 nautical miles. The full displacement of the ship in the "military" version - 4600 tons. Maximum speed - 28 nodes.

The economic move of the ship is provided by two MTU 20V 1163 diesel engines, horsepower 9 900. each and the afterburner is a gas-turbine unit with a GTE General Electric LM2500, power 30 000 hp similar to the base turbine on US Navy ships.

Ships are actively used to tackle drug trafficking in the Caribbean, smuggling, guarding US maritime borders, suppress maritime poaching and flag display in potential hot spots, such as the South China Sea, near the border between the territorial waters of South Korea and the DPRK in the Sea of ​​Japan. The Americans do not forget about our country either - at least one ship is regularly on combat patrols in the Bering Sea, and periodically, when the ice situation permits, it makes calls in the Arctic. 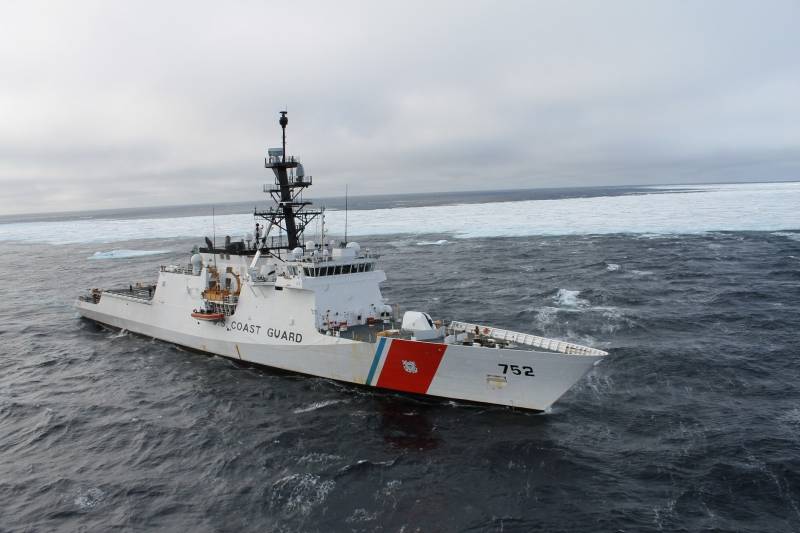 Also, the crews regularly participate in joint combat exercises with the US Navy, which work out full-fledged combat missions that can be faced by the ship during a real war, including firing on surface, air and coastal targets, guarding convoys, disembarking special forces, defense naval bases and ports from saboteurs, fighting mines.

By all indications, the combat readiness of the Coast Guard crews in the worst case for them is not lower than that of the crews of the US Navy, but most likely (especially recently) is higher.

Of course, America is a rich country, and in principle everything can afford. However, it must be admitted that similar, and even heavier armed (although, apparently, inferior in electronic and electronic weapons, and significantly in terms of displacement) are ships, for example, in Venezuela, which could never be attributed to the rich countries.

On the part of the Russian Navy, the construction of patrol ships of the 22160 project has been and remains stupid of unprecedented proportions, moreover, due to the material interest of individual participants in this scam. But if it really was necessary to build them, then it would be worth taking an example from the Americans. Well, if someone learn something, then good. Russia has almost all the technologies needed to build such ships, albeit at a slightly lower technological level.

Nevertheless, the black bands are not everlasting, and learning from professionals is something good is already right now. 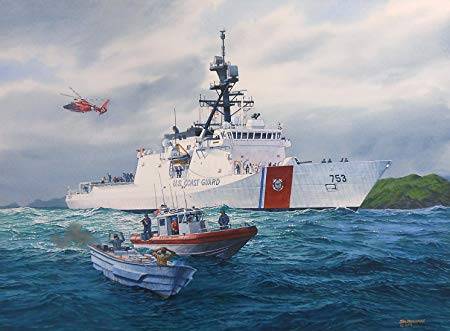