Encryption equipment of the Soviet Union. Russian "Enigma". Part of 5

December 27 2018
21
Paradoxically, in the USSR, speech coders appeared before the technology for classifying text telegraph messages. The pioneers in this field were also the engineers from Ostechbureau, who were the first to create a mock disk encoder. The first copies of existing encryption machines, in many respects different from foreign models, were proposed by Russian engineer Ivan Pavlovich Volosky in 1932 year. 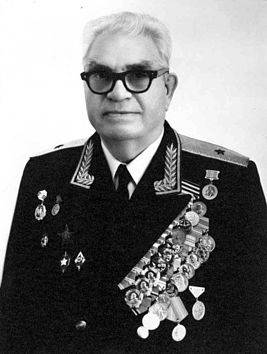 Ivan Pavlovich Volosok. Head of the 2 Division of the 8 Division of the Red Army Headquarters, Chief Designer of the First Domestic Serial Encryption Equipment B-4 in 1935 – 1938, Stalin Prize Laureate

One of them was a cumbersome and not very reliable equipment, which received the sonorous name ShMV-1 (1 Hair encryption machine). At the heart of her work was the principle of imposing a gamma (random sequence of characters) on a combination of plaintext characters, which ultimately created an illegible cryptogram, which was almost impossible to crack at that time. On a punched tape, the signs of a random scale, which was made on a special device under the code "X", were marked. All work on this topic was carried out in the 8 department of the General Staff of the Red Army, which was organized in 1931. To replace ShMV-1, on which most of the new solutions were tested, in the 1934 came the cipher machine B-4. After four years of improvements and trial operation at the plant number XXUMX them. A.A. Kulakov (a carpenter of the plant who died as a hero in clashes with the White Guards on the Don) collected the first serial copies. In this regard, I. P. Volosok wrote: “The complexity of the task ahead was that, since previously there was no cryptographic technology in the country at all, it was necessary only to orient oneself.” Production was launched, but already in 209, engineer Nikolai Mikhailovich Sharygin conducted a major modernization of the hair of Volosk. The new device received the name M-1939 "Spectrum" and from the year 100 produced in parallel with the prototype. The M-1940, in its entirety, weighed an impressive 100 kg and consisted of three key components: a keyboard with a contact group, a belt-pulling mechanism with a transmitter, and a special keyboard attachment. The level of energy consumption of all this mechanics is very clearly displayed by the mass of batteries - 141 kg. Despite such gigantic mass-dimensional parameters, the Spectrum was quite tolerably used in real combat operations: in Spain, 32, on Lake Hassan, in 1939, on Khalkin Gol, in 1938, and during the Soviet-Finnish war. The awareness of contemporaries about the national school of encryption is evidenced by the fact that the combat use of M-1939 and B-100 is still not fully declassified. In this regard, there is an assumption that the Soviet cryptographic equipment experienced its first use on the battlefield only in the 4 year. Of course, such “monsters” saw the battlefield very conditionally - an encrypted communication was made between the General Staff and army headquarters. The experience of use in the troops was comprehended (Volosok personally supervised the operation) and it was decided to increase the mobility of the cipher units at the front. In 1939, in the USA, 1939 Studebaker buses were purchased immediately, which later became mobile special hardware of the cryptographic service. Receipt and reception of telegrams in such “volunteers” became possible even during the march of subunits. 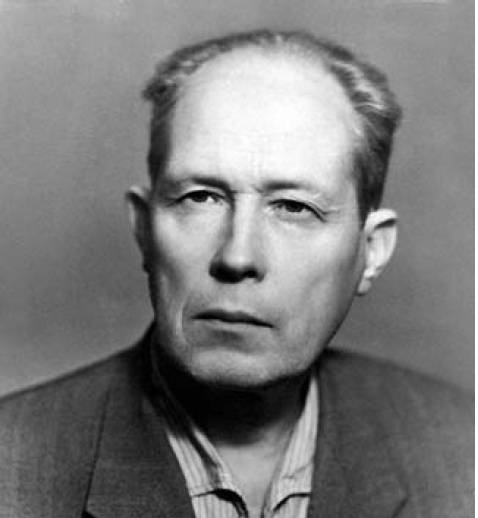 Rytov Valentin Nikolaevich. Chief designer of nine encryption-coding machines and equipment with disk encoders in the period from 1938 to 1967. Winner of the Stalin Prize

Plant number XXUMX also became the ancestor of the new direction of the domestic encryption technology - the production of disk encryptors. Engineer Valentin Nikolaevich Rytov worked in this connection on the problem of replacing hand-held ciphers in the army-corps-division operational unit. It was possible to create a compact device with a mass of 209 kg, working on multi-alphabetic encryption. The name of the novelty was given to K-19 "Crystal" and launched into a series in 37 year with a plan for the release of 1939 pieces per year. They produced a typewriter in Leningrad, then they evacuated to Sverdlovsk (plant number XXUMX), and 100 was removed from production in the year. 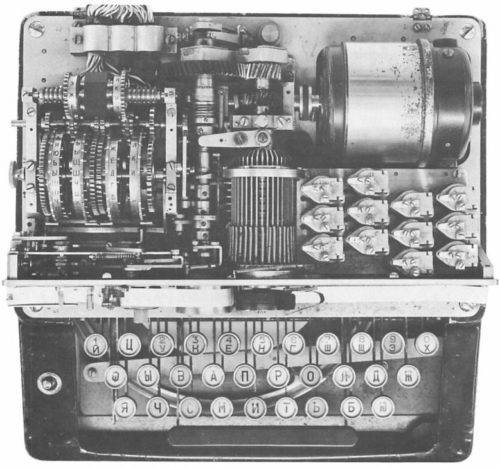 The total number of text-based encryption machines before the war in the USSR was on the order of 246 copies, of which 150 were K-37 type, the rest M-100. The 1857 man of the cryptographic service worked with this technique. On average, the speed of transmission and processing of coded information on the fronts of the war increased 5-6 times, and there are no documented facts of hacking by this technique by the Germans.

In this история text encoders does not end, as in 1939, in the depths of the aforementioned plant No. 209, prototypes of technology for coding telegraph messages were developed. It was C-308 (the most popular afterwards) for the Bodo apparatus and C-309 for the Soviet telegraph CT-35, the production of which during the war was transferred to Sverdlovsk to the mentioned factory No. 707. C-307 was also developed as a field encryption set-top box for a telegraph device with battery power and a C-306 for connection to the classic Morse device (mains supply). The whole story was a consequence of the technical task, which came to the plant in December 1938 from the Research Institute of Communications and the special equipment of the Red Army to them. KE Voroshilov. Also, just before the beginning of the Great Patriotic War, in the 1940 year, the design engineer group P. A. Sudakova developed a military direct-printing start-stop telegraph with a removable NT-20 encryption unit. 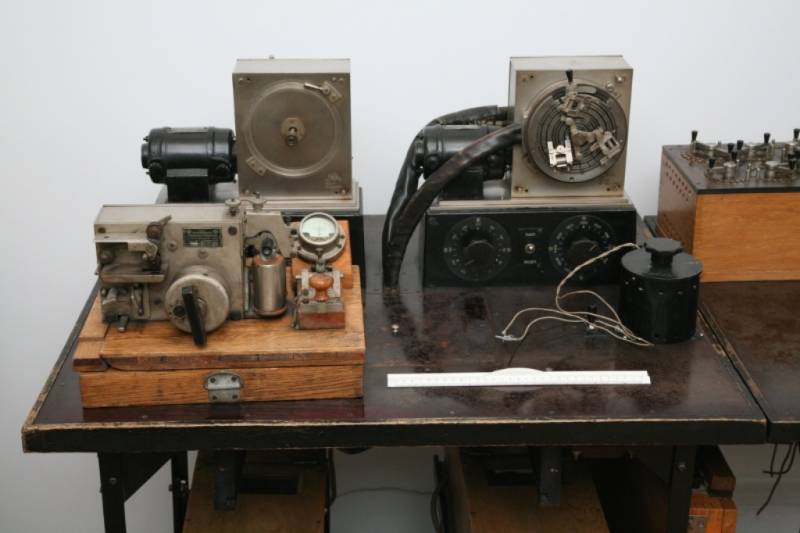 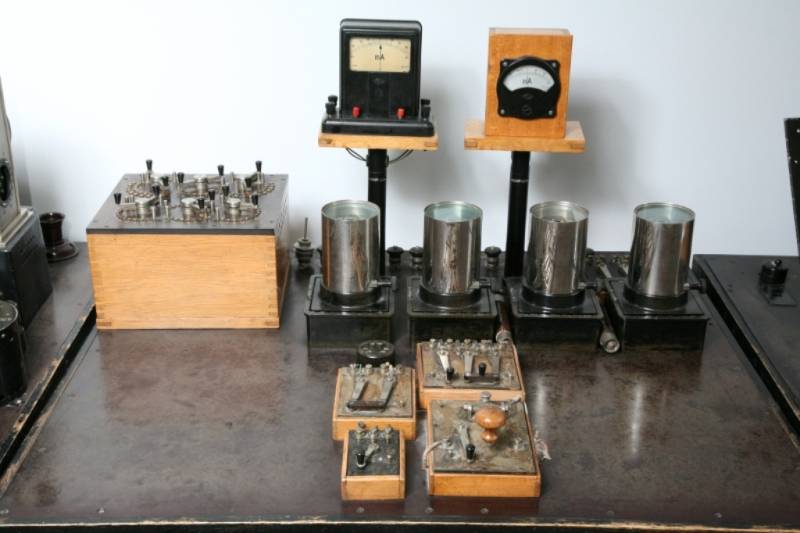 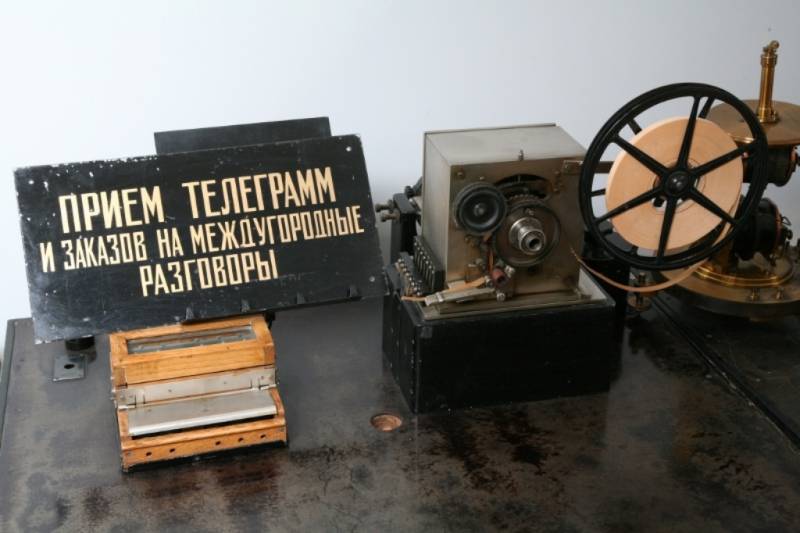 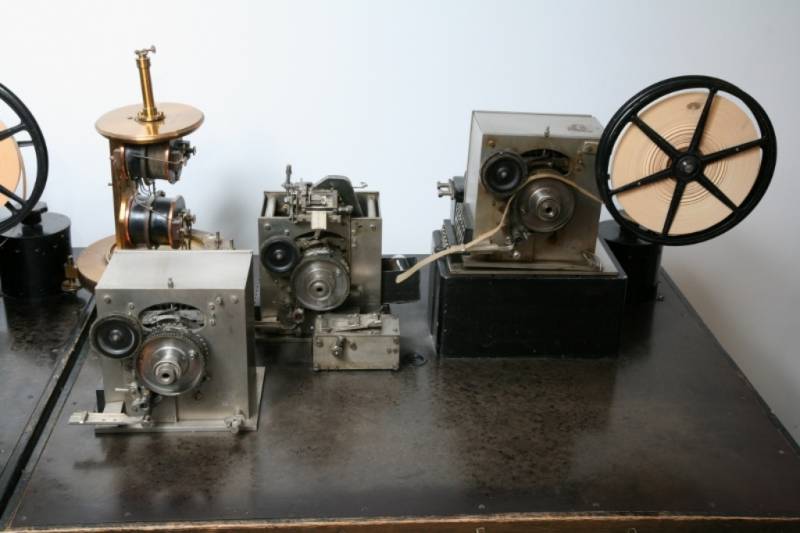 It was used in accordance with the order of NCO No. XXUMX, which directly prohibited the transmission of plaintext on the Bodo apparatus. The device under the code “Sova”, developed at the Institute №0095 of the People’s Commissariat of the Electric Industry in 56, was particularly difficult. The scheme was based on the use of special coding, which was intended to close the RF channels formed by the NFTV-1944 “Falcon” technique in the spectrum up to 42 kHz. NVCHT-10 is a field channel-forming equipment that allows you to organize communication over high frequency on copper and iron circuits, as well as on cable. This class also includes the Neva equipment, which classifies on the Moscow-Leningrad line from the summer of 42. The charm of the Neva was that it could be used on the entire network of government communications, since it interfaced with all types of channel-forming RF communications technology.

In what operating conditions did the text encryption technology work during the war years? For example: only the 8-e The Red Army Directorate has processed more than 1600 thousands of cipher telegrams and codograms in four years! The daily load on the front headquarters was considered normal within the 400 cipher, and the army headquarters was considered to be 60. The cipher service of the General Staff of the Red Army sent on fronts more than 3200 thousands of cipher suites for the entire period of the Great Patriotic War.

Specialists of the 8th Directorate of the General Staff, in addition to creating new models of equipment, were engaged in the training of cryptographers at the fronts. So, only designer M. S. Kozlov was sent to the army during the war 32 times. The designer became famous even before the war, when in 1937 he took part in the development of the encryption machine M-101 "Emerald", which compares favorably with its predecessors in its compactness and lightness. Later, in May 1945, it was Kozlov’s group that removed three wagons of special equipment from Karlhorst and Potsdam as part of the reparations, which were later used in workshops for the repair of domestic encryption and coding equipment. It is noteworthy that after the war on navy divisions of divers were created, exclusively engaged in the survey of sunken German ships with a view to searching for everything related to communication encryption. Understanding the cryptographic experience of Nazi Germany was a milestone in the national engineering school of cryptographers.

Based on:
Babash A.V., Golev Y.I., Larin D.A., Shankin G.P. Cryptologic Ideas of the 19th Century // Information Security.
Bykhovsky MA Circles of memory. Essays on the history of the development of radio communications and broadcasting in the twentieth century. "
Gareev M. A. The Everlasting Lessons of the Forty-First. Independent Military Review.
Yu. I. Golev., D. A. Larin, A. E. Trishin, G. P. Shankin. Cryptography: pages of the history of secret operations.
Larin D. А. Soviet cryptographic service in the years of the Great Patriotic War.