VKS forced to use the Tu-214P. Ukrainian "jamming" Mi-8 will wrap Donbass with EW veil

December 26 2018
66
While commentators from social networks with a fair amount of justified irony continued to comment news about the transfer of the UMS-1000 PC 12M2 project to the Mariupol Maritime Squad of the State Border Guard Service of the territorial sea, predicting to him the fate of BG-119 (project 1400M Grif), which was barred off the coast line of the Nameless patrol boat, which attempted to shell coastal fortifications DNR Armed Forces On August 31, 2018, the news about gaining operational operational readiness by the two most advanced modifications of the electronic-counter-rotor-wing systems Mi-8MTPB and Mi-8MTPS remained almost unnoticed. After restoration by forces of specialists of the state enterprise Konotop Aircraft Repair Plant Aviakon, two sides were transferred to the army aviation AFU, and in the foreseeable future, they can be transferred to one of the military airfields at the Donbass theater of operations (Berdyansk or Kramatorsk). 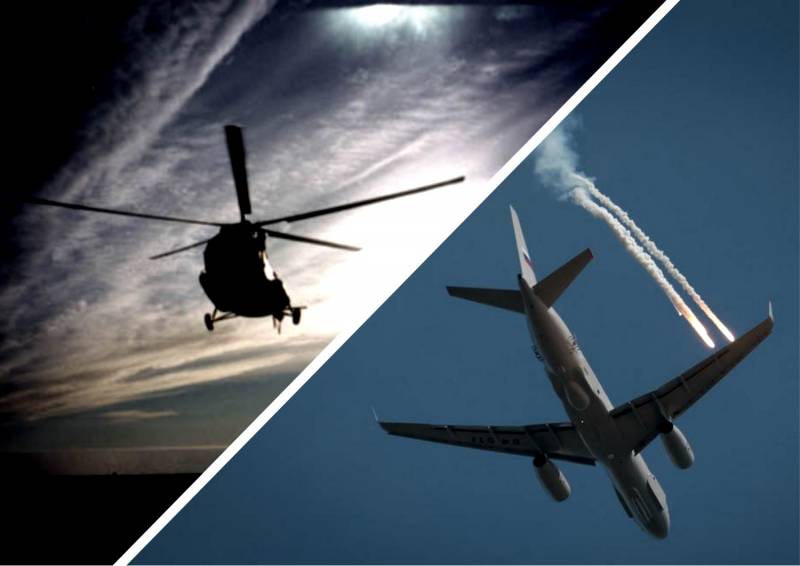 Taking into account the fact that in February 2017, in accordance with the order of the defense department "Square" No. 711, the military unit A2772 of the Special Operations Forces of the Armed Forces already received 4 EW helicopters (3 Mi-8PPA and 1 Mi-8СМВ) earlier modifications, the number of these machines at the disposal of the Ukrainian military units (in 4 modifications) reached 6 units. And this is not the best way to reflect not only on the capabilities of the 1 Army NM DPR unit’s coroning the offensive of the Armed Forces of Ukraine in the Telman’s isthmus region, but also on the capabilities of the airborne radar intelligence equipment of the Russian Aerospace Forces' subdivision 36-th, 79-th and 128-th separate brigades of the Armed Forces of Ukraine. Consequently, in order to objectively evaluate the capabilities of at least one of the 6s adapted to perform EW Mi-8 tasks on a modern network-centric TVD, as well as to develop effective methods of countering it, it is necessary to immerse yourself in studying the parameters of the radio-electronic "stuffing" of this rotary-wing machine.

The most technically advanced version in the “jamming” line of the Mi-8, inherited from Kiev from the Soviet defense industry, is the Mi-8MTPB. The machine was developed by specialists of the Kazan Helicopter Plant based on the Mi-8МТ multi-purpose helicopter, which differs from the earlier version of the Mi-8T by 16% by more powerful 1454-strong GTE Klimov TV-3-117МТ (compared to GTX TV2-117А). The more "high-torque" version of the Mi-8 was chosen as a platform for a reason. The fact is that, in accordance with the tactical and technical tasks of the Mi-8MTPB, it was equipped with a rather massive and high-energy electronic counter-response complex "Bison", whose 32-element active phased arrays needed to be placed on board the helicopter as well as an efficient liquid cooling circuit, represented by 6 airfoils, -oil radiators. The same circuit was used to cool the antenna modules of the EBS SPS-63 / 66 "Azalia" station. 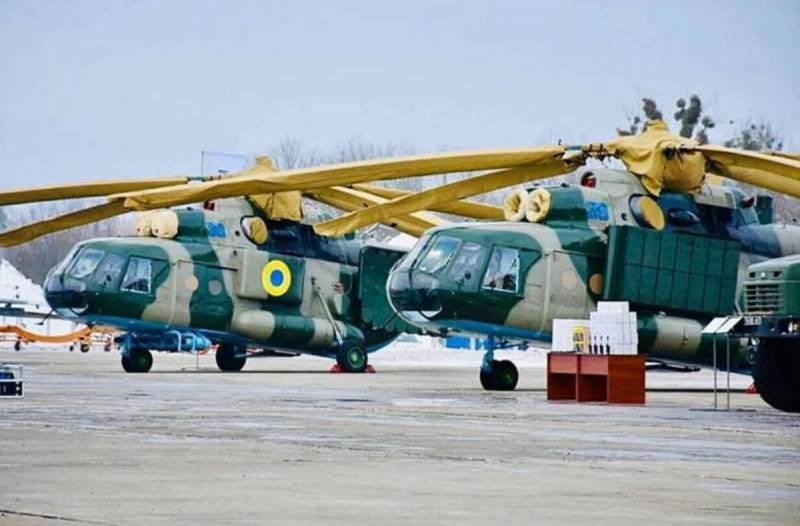 Repaired by the Konotop Aircraft Repair Plant Mi-8MTPB (in the background; visible 6 oil-air radiators under the fuselage) and Mi-8MTPS (in the middle plan)

As for the technological capabilities of the above EW systems deployed on the Mi-8MTPB, they are capable of creating a lot of problems not only to the operators of counter battery 1L219 “Zoo” counter-battery radars of the artillery reconnaissance, which are at the disposal of the Kalmius 1 AK Brigade of the 50 AK AKNNRR Artillery Brigade. the operators of the Shmel-M radar complexes of Russian airplanes ARLOU A-50 and A-63U, which regularly carry out reconnaissance flights in the airspace of Russia near Novoazovskiy and Telmanovskogo areas for I shall identify in advance the facts of the preparation of Ukrainian militants for aggressive actions (including the movement of ground equipment and the operation of tactical aviation). For example, the REP ATP-66 / 50 "Azalia" complex sets up jamming both in the S-band decimeter waves, as well as in the G / H / X-bands centimeter waves, which fit into the working ranges of both the Zoo and the aircraft radar family A-XNUMX / U.

The operators of the complexes will encounter complex frequency-modulated masking interference of the "sliding" type with pseudo-random tuning of the radiation frequency from S to X-band. At the same time, the width of the spectrum of the jamming signal will be 240 MHz, which will create enormous difficulties in the selection of real ground targets by means of the Shmel radar, as well as complicate the Zoo and Aistenok artillery reconnaissance complexes the algorithm for constructing the trajectories of Ukrainian high-explosive fragmentation and rockets for the final calculation of active artillery positions of the Armed Forces. Also, due to the high spectral density of the jamming channel, the Azalia complex is able to minimize the efficiency of centimeter coherent pulse radar detectors and guidance radars of the Osa-AK self-propelled anti-aircraft missile systems, which are in service with the LDNR army corps. As for the A-50U, due to the use of a less protected from interference (in comparison with PFAR and AFAR) radar "Bumblebee" with a waveguide-slot antenna array, the Mi-8MTPB jamming sector on the multifunctional indicators of the Mainstay operators will be flare, against the background of which units tank units of the Armed Forces will be practically indistinguishable.

An even more powerful EBC “Bizon” complex, represented by 32-element AFAR of the decimeter wave range, will add fuel to the fire with the ability to cover the actions of the Ukrainian Armed Forces aviation and Su-25 attack aircraft over the Donbass from modern Oversieve-G type radars deployed in the Kuban and in the Rostov region, as well as to suppress the control channels of territorial reconnaissance UAVs. The use of the Mi-8 MTPB helicopter complex of electronic countermeasures by the Ukrainian military units (as well as covering the meter range of Mi-8PPA equipped with an EW Bean) can only be opposed to the use of advanced radar aircraft, as well as radiotechnical and radar, as well as radiotechnical and radar, as well as radiotechnical and radio-technical airplanes of the Russian Federation. electronic reconnaissance Tu-214P, which for unknown reasons are extremely rare guests at the LDNR air borders (the last known reconnaissance flying near the Donbass was carried out in the autumn of the year 2015). The multi-frequency MRK-411 multi-frequency radar / radio-technical complexes placed on board, represented by at least 4 by side-view antenna modules and one all-view radar module of the lower hemisphere review (in the radio transparent under vent body “drop-shaped” fairing), can present the opponent with two surprises.

First of all, it is the use of active phased antenna arrays capable of forming "zero sectors" of the radiation pattern in the direction of the radiation source (in our case, Mi-8MTPB / S / PPA helicopters), which increases the noise immunity and the ability to select ground objects against the background noise. Secondly, this is the ability of the MRK-411 radars to use ultra-low operating frequencies (lower meter wavelengths), thanks to which the Tu-214Р operators can scan the target area in the subsurface radar mode, detecting not only armored vehicles, artillery and anti-aircraft weapons with radars off, but also enemy underground infrastructure in most types of soil and under the snow gauge. Neither the EF Bean stations, nor the Bizon REB complexes are able to withstand this long wavelength mode of the MRK-411. The only weighty problem is the presence of only two unique Tu-214Р in service of the Russian VKS, while a probable escalation on several strategic directions requires the adoption of about ten such boards.