December 26 2018
398
There is a mythical expression about Stalin: "He took Russia with a plow, and left it with an atomic bomb." The very fact of this statement is obvious. This is a reality that most of the current young generations already do not know. 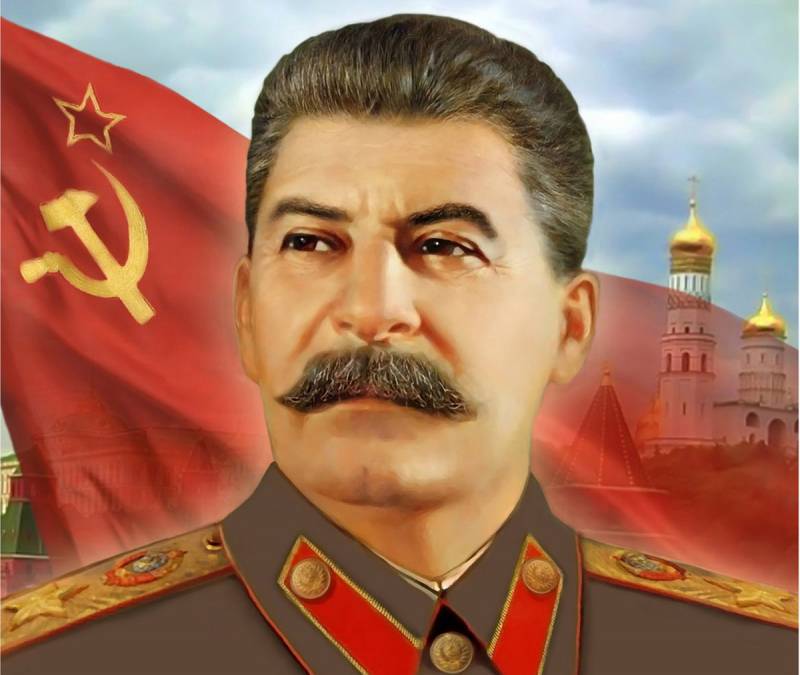 Indeed, Russia after World War I, the Civil War (distemper) and intervention survived literally by a miracle. The country was completely drained of blood. (millions of dead, wounded and refugees), wrecked, plundered (Russia was literally sucked dry), industry and transport were severely degraded, existing only as a reminder of the Russian industrialization of the late XIX - early XX (first "Russian miracle"). Not a single large plant, not a single large power plant was built, there was not a single transport project implemented. There was no financial resources and gold: the gold reserves of the Russian Empire were partially spent by the tsarist government, partially plundered by whites, foreigners and taken out by Lenin's “guard”. Huge capital, finances, valuables (gold, silver, precious stones, works of art, etc.) were taken out by the fleeing aristocracy, the big bourgeoisie, the marauders who plundered the country during the fratricidal war.

Agriculture, which in tsarist Russia did not shine with advanced agricultural technologies, was thrown back hundreds of years ago. Instead of tractors and various mechanisms used horses or people themselves worked. Agriculture after the defeat of large commodity farms, estates, which gave the bulk of the grain for sale, degraded, its marketability was reduced compared with the Russian Empire. The village returned to subsistence farming, most of the farms worked only on self-sufficiency. The city could not provide the village with the necessary industrial goods. Confrontation on the line of the city - the village. At the same time, social stratification in the village itself was preserved. The New Economic Policy (NEP) strengthened the position of wealthy farms - the kulaks. The village still lived in poverty, starved. Hunger 1921-1922 swept 35 provinces with a population of 90-million, killed hundreds of thousands of people, millions of children lost their parents and became homeless. In this case, mostly poor, poor peasants suffered. As a result, the village was on the verge of a second peasant war. The first peasant war, which began immediately after the February Revolution, was a terrible and bloody tragedy that claimed millions of lives. She was crushed with great difficulty. Now the village was ready to explode again.

Russia's economic mechanism 1920-s - a mixture of weak administrative planning and a speculative market, could not provide not only a breakthrough, but also normal development. There was a merging of the rapidly growing Soviet bureaucracy and speculators, the criminal world, which was flourishing on the ruins of the empire. There was no hope for foreign investment. Soviet Russia was in international isolation. At the same time, foreigners were happy to create a semi-colonial economic model in Russia, to gain control over existing enterprises, mines, and mineral deposits.

The weak, degraded industry could not provide the village with the necessary quantities of consumer goods, tractors and other equipment. There was no engine building in the country, aviation industry, mass automotive, electrical engineering, shipbuilding fell into decay, etc. Without developed engineering, in the industrial era, death awaited Russia. Science and industry could not give the army a modern weapontechnique. In the army parks there were only obsolete cars, Tanks and planes from the times of the First World War. And there were very few of them. Agriculture could not feed a large army, create strategic reserves in case of war, to supply troops and cities. As a result, Soviet Russia was doomed to a military catastrophe in the event of a new major war. It could be defeated not only by such advanced powers as Germany, Britain or Japan, but also Poland and Finland. A new big war was not far off. A little more and Western armies (and in the East - Japan) with mechanized divisions and air fleetsarmed with masses of modern tanks, planes, guns, they would simply crush the remaining in the past Russia. New industrial the capitalist world would just have eaten the USSRas once the Western colonialists dared the once mighty and numerous peoples and tribes of America and conquered ancient and rich, but technically backward India.

At this time, the Western powers and Japan developed rapidly. The heyday of the industrial era. At the factories of Ford launched the conveyor. The automotive industry, engine building, aircraft manufacturing, shipbuilding, chemical industry, instrument engineering and electronics industry, metallurgy, etc. experienced rapid development. The world was rapidly electrifying the industry. And Russia has stagnated, it is now lagging behind, not only from world leaders, like the Russian Empire in 1913, but also from the second-tier powers. The lag became monstrous, it was the death sentence of Russia-USSR. As Stalin honestly admitted: “We have fallen behind by 50-100 years ...” And it was necessary to make literally a miracle, a qualitative breakthrough in the future, in order to save Russia and the people.

Another serious problem of Soviet Russia was psychological disaster, cultural and psychological, moral collapse of the “old Russia”. The people were crushed, literally crushed by the disaster of 1914-1920. There was a destruction, decay, death of the former Russia, the Romanovs, the old society. Millions of people died in world and civil wars, during the peasant war and the criminal revolution, from hunger and disease. Millions of people fled abroad. The Russian Empire died in brutal agony. Russia paid a terrible price for the deadlocks of its development caused by the Romanov project, for the tragic discord between the civilizational code matrix and real life, for the betrayal of the pro-Western "elite" that abandoned the civilizational historical missions of Russian civilization and Russian superethnos.

Russia-Russia was exsanguinated, the moral and psychological structure of the Russian people, the state-founder, bearing the basic creation and preservation of the empire, cracked. Russia withstood the 1917 disaster of the year, the transition from the old world to the new - the USSR. The socialist revolution promised great men the meaning of their existence. However, the Soviet Russia 1920s were squalid. Instead of a happy, creative and new world, full of opportunities, people again saw a difficult, hungry and unfair daily life. Hope faded away. There was no future for such Russia. Thus, the people could leave the unjust old world, but did not see a happy and just new world.

And at this time, when Russia again faced the threat of total destruction, the Soviet elite frantically searched for a way out. There were three possible scenarios. The first is a return to the foundations of the old world: bourgeois capitalist, liberal-democratic. To recognize that the future of mankind is the Western matrix of development (in fact, it is the White Project, the feudalist Westerners who killed the Russian empire, the autocracy). That is, red Moscow could bargain for the honorable conditions of surrender, establishing a pseudo-communist (Marxist) regime in the country, suppressing any discontent of the people by force and terror. The party elite would quickly be reborn, become a colonial administration, the management apparatus of the owners of the West.

The second is to try to close off from the old world, create an “iron curtain”, and after it save up strength, build your own world. However, in essence, this path eventually led to the first - the rebirth, the rotting of the Soviet, party elite. In addition, having withdrawn, without advanced Western technologies, achievements of science and technology, the Soviet Union of the 1920 model, would quickly become a victim of the West's "crusade" to the East. Thus, both scenarios led to a catastrophe, it was only postponed for the future.

The third scenario was proposed by Joseph Stalin - the red emperor. He managed to literally inhuman effort to raise a dead civilization from the ashes, give it a new impulse of development, create a new reality, civilization and society of the future. Create a super-civilization of the future, which in the future buried the Western project of enslavement of the planet and gave humanity the opportunity to live humanly, happily and with dignity.

First of all, Stalin was able to give people the image of the future. - brilliant, beautiful (especially for young people), the world of the future. The society of knowledge, service and creation, where the main will be knowledge, work and creation (creativity). Society of social justice and the domination of ethics of conscience. It was a real alternative to Western society - a society of slave owners and slaves. Soviet Russia began to create a world of creation, social justice, a world where there is no exploitation, social parasites. A world where, due to labor, creativity, the disclosure of intellectual and spiritual abilities of a person and service to society, an immeasurably higher level of development of society and an individual will be achieved than in the old world.

It was a breakthrough in the future. For the first time on the planet they created a new world-civilization, a society of the future. The masters of the West (the current global mafia) are building a global slave civilization, based on the ancient slave-owning civilizations of the Ancient East. Rome and Greece. This is a caste, slave-owning society with the division of society into "elected" -the Lord and "two-legged tools." The Soviet Union offered a different world, based on justice, truth, and ethics of conscience. Supercivilization and a society where the spiritual will be higher than the material (“golden calf”), the general is above the private, justice is above the law. Where human desires will be reasonable, and collective interests will outweigh bestial egoism. A world where people realize that for a happy future, today we must endure hardships, work and if we need to fight, give our lives for great ideals.

Thus, Stalin and his associates embodied the ideals of the Russian civilization matrix code, Light (Holy) Russia. They tried to create a new reality, where justice, truth, good and honest work will prevail. And you can not say that they did not succeed. It turned out a lot, though not all. Old reality resisted, did not want to go into the past. In particular, the masters of the West organized the Second World War with the aim of destroying Russia-USSR. Due to a chronic lack of time, the most radical, tough methods had to be applied. Psychologically, a significant part of society, especially the elite, was not ready for a new reality, it was drawn into the past. And the new generations, with their mind and soul who believed in a bright future, were severely drained of blood by the Great War. Hence the pullback during the reign of Khrushchev and Brezhnev.

As a result, Stalin had nothing in the beginning but a dream, an image of the future. However, this image coincided with the civilization code of Russia. The 1917 revolution of the year created the ability to create a new reality, the world, and the red emperor used it. In order for the country and the people to survive, to preserve the Russian civilization, Stalin began to translate the civilization matrix into a national development project, in the materialization of the project of Light Russia. The new Soviet (Russian) civilization, the world-society of the future should have become the basis of the entire human civilization, determining its development for hundreds of years to come. It was a challenge to the global mafia, the "masons" who built the "new world order" - the slave-owning civilization. The last emperor of Great Russia (USSR) did literally the impossible!

What is the phenomenon of Stalin

We are in Yandex Zen
Anti-aircraft missile system C-400 Triumph against the Patriot
398 comments
Information
Dear reader, to leave comments on the publication, you must to register.