Passions on the WTO, or Who in Russia is unprofitable joining the World Trade Organization 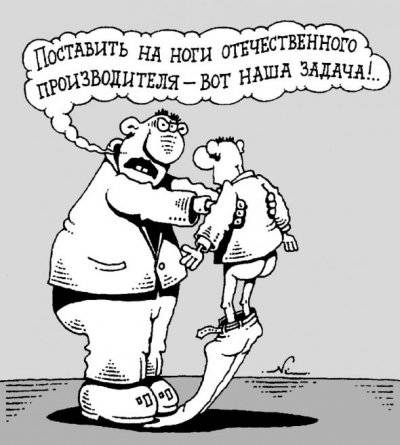 Perhaps, for the first time in the past few years, the speaker of the State Duma of the Russian Federation has quite harshly criticized the actions of the Government of Russia. Sergei Naryshkin allowed himself to speak out quite sharply about the fact that the Russian Government is too delaying in introducing the protocol on the accession of the Russian Federation to the WTO to the Duma. The decision that Russia could become the 155 member of the World Trade Organization was made at the international level even 16 December last year, but so far the deputies have not received any documents for ratification of the treaty on joining the WTO. And such a government delay in time today is due to several reasons. The first one is quite banal: a series of elections in Russia, a change of the President and the Cabinet of Ministers. But the second reason is the possible desire of certain forces from a slightly different angle to look at the possibility of joining the WTO.

Anyway, the other day, Prime Minister Medvedev really promptly reacted to Naryshkin’s concern and said that the Russian Government nevertheless approved documents that talk about joining the World Trade Organization in the second half of this summer. Now, as it has become fashionable to express itself recently, the ball rolled over to half of Sergei Naryshkin's field, and already the deputies should ratify the document received by them.

Immediately after the document appeared in the State Duma of Russia for carrying out the ratification procedure, the debate about whether the World Trade Organization is necessary for Russia with a new intensity flared up. On this occasion, between opponents, some of whom see advantages in joining the Russian Federation to the WTO, while others are only drawbacks, a wall of misunderstanding has arisen. Many of the deputies are already calling a possible decision on accession to the WTO for Russia anti-people and are ready to vote against. It is reported that, for example, the Duma faction of the “Fair Russia” party is going to vote against it, which has recently been trying to position itself as the most anti-government force of the sixth State Duma.

In order to understand why it is precisely the question of Russia's accession to the WTO that is causing the discussion, it is necessary to weigh the pros and cons of such accession.

So, our country is trying to join the World Trade Organization from the very beginning of the existence of the WTO as such (1995 of the year). Attempts to join the WTO ancestor - the organization of the General Agreement on Tariffs and Trade GATT), which came to light back in 1947, were also undertaken by the Soviet Union (from 1986). It turns out that if you take all history Attempts to join these organizations that have replaced one another, then this year’s attempts will be performed by 26 years already! This is the longest entry of any country into the designated trade union for all the years of its existence ...

And now, it would seem, Russia has achieved its goal - all obstacles for a full-fledged entry into the number of WTO member states are canceled, except for one barrier - an internal one, which, it seems, should not have appeared at all. However, it has now become clear that it is precisely the internal Russian contradictions that can once again put an end to our country's accession to the WTO.

To begin with, let’s analyze the position of those who oppose entry. These people include, as is very typical, Russian industrialists, holders of large blocks of shares of various companies: from agricultural to metallurgical. One of the points of view that can be called the word “against” is based on the fact that after entry into the WTO, Russian markets will suddenly be overwhelmed with low-quality foreign products that will be cheaper than Russian products, and therefore the state will artificially stimulate demand for products of foreign enterprises. Anxiety sounded and those who are engaged in the release of agricultural products. One of the ardent opponents of the theory and practice of Russia's accession to the WTO is the owner of the Rostselmash enterprise Konstantin Babkin and the president of the Meat Union of Russia Mushegh Mamikonyan. Both are sure that the reduction of import duties (in some cases, a reduction to 0%) on imported goods can play a cruel joke with Russian manufacturers. In their opinion, such a state of affairs can lead to a complete imbalance between the established relations between the raw material and processing industries in Russia. The same Rostselmash today supplies its harvesters to 27 countries of the world, and after joining the WTO, the plant management is confident that these markets will slam their doors before the Russian manufacturer. Words that can really scare the average Russian.

However, upon closer examination, it may well refuse that the above-listed comrades do not at all advocate for the interests of a Russian citizen, but rather try to protect their own interests. Indeed, if import duties for foreign goods are reduced, this may to some extent affect the Russian producer. However, it is not at all clear what is wrong with that. It could simply be that many Russian producers lived quite comfortably until the entry into the WTO, creating products on equipment whose wear reached 80-90%, which, as a result, increased the cost of these products by the same 80-90% (that is, almost doubled). And if the talk about joining the WTO would have remained a talk, it would only play into the hands of such manufacturers, because such a word as “modernization” of many industrialists cared little.

Well, judge for yourself who will abandon the equipment that was “inherited” from Soviet times, if, for lack of competition, this equipment gave a profit, even if it was the last thing. Naturally, the owners of enterprises that did not want to invest in the development and renewal of fixed assets are now sounding the alarm: they say they will not buy our goods, but will only buy low-quality Chinese or Turkish consumer goods. But then let us be honest with ourselves: what, if today, when Russia has not yet entered the World Trade Organization, access to foreign goods for the shelves of our stores is completely closed? .. Or Russian industrialists are sure that the same Russian meat industry today it amazes the buyer with its unsurpassed quality? .. Obviously, all these words that foreign goods will crush Russian-made goods are just a fiction, which is an excuse for those who are not used to open and uktivnoy work. It is completely incomprehensible what a domestic enterprise can fear, which produces truly high-quality products, and, moreover, realizing these products at a competitive price.

In the appendage to their arguments, opponents of Russia's accession to the WTO lead the Ukrainian version, when the share of imports in Ukraine has grown substantially in recent years, while foreign markets for Ukrainian producers have remained ghost markets. However, for some reason, none of the opponents of entry does not say that Ukraine entered the WTO without any reservations, that is, on the terms of the World Trade Organization itself. Ukraine was not granted the right to a seven-year transition period, during which it is quite possible to take a series of measures to adjust its production to generally accepted standards. More precisely, the Ukrainian authorities themselves did not say a word about any preferences when joining. Therefore, to compare Russia and Ukraine, to put it mildly, is not quite correct.
Opponents of entry lead to another argument, which acts like a bombshell on many: after joining the WTO, the Russian education and health care system will be commercialized. At the same time, many Russians are immediately confronted by certain financial tycoons who will buy up all the universities and hospitals and will teach and treat exclusively for money. However, such a view is nothing more than a common delusion. One of the bright counterexamples is China. Here, not only did no commercialization of education and health care take place, but, on the contrary, the rapidly developing business literally dragged numerous spheres of the national economy. After the entry of China into the WTO, there was a significant modernization of production, the annual growth of the economy amounted to 10 and more percent. For some reason, opponents of the entry of the Ukrainian version of the development lead, but on the Chinese version delicately silent.

But if we speak frankly, then do we have now education and health care are not subject to commercialization. Literally the other day, the website “Military Review” published materials on corruption in higher education institutions, where many teachers created a whole criminal scheme for extracting money from students. Yes, and free health care, which is no secret, remains so only on paper.

Opponents of the introduction are silent about what really bothers them. And this reason lies literally on the surface. One of the provisions for joining the World Trade Organization states that all subjects of international trade receive equal rights and all WTO members must publish transparent reports on their activities. But it is precisely equality and transparency that we most often limp. Corruption schemes often generate such trading Frankensteins, which are worse and more expensive, but they are no less actively sold on the domestic market, since there is sometimes no competition at all.

In this regard, the question of joining the WTO flows into the real plane of the fight against corruption, and this is a completely different situation. In this case, the same owners of large equity stakes in companies will increasingly talk about the anti-popular nature of the law, just not to lose “honest and unsustainable earnings,” which today, with artificially restraining competition, gets so easy.

In general, everything new, a priori, scares a person. But without renewal it is impossible to further develop the economy. If accession to the WTO is seen as a pure negative, then maybe, then, in general, to enclose a wall and go to subsistence farming - no risks ...