December 21 2018
49
Domestic industry has long been actively engaged in the subject of unmanned aerial vehicles, and large quantities of such equipment are already serving. At the same time, only light and medium-sized UAVs are still in the series, while heavier vehicles capable of conducting reconnaissance and carrying weapon, in the army yet absent. Fortunately, the situation is gradually changing and in the near future will take the desired form. A number of promising projects are already being developed, and in the near future new models will reach the army.


It is worth recalling that at present, various Russian enterprises are developing several promising medium and heavy UAVs capable of carrying both reconnaissance equipment and weapons. Despite the known problems, design work continues and leads to the desired results. Several new samples will soon be able to test, and one drone will have to complete the checks and enter the series.

The most successful domestic development in the field of medium and heavy UAVs can be considered a project called "Orion". This unit was developed by the Kronstadt Group as part of the Pacer design work. The project was created a few years ago, and in 2015, a prototype was noticed at one of the Russian airfields. In the first months of 2016, the Orion first took to the air. Later, the drone began to show at domestic military-technical exhibitions. 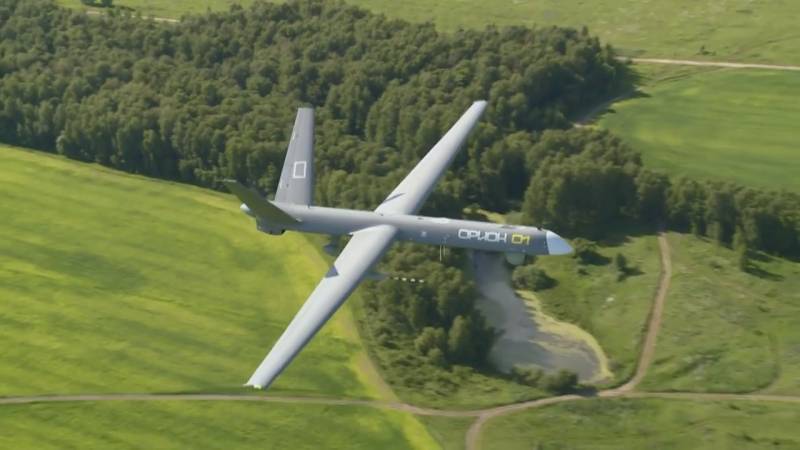 On December 19, a number of domestic media published relevant plans of the Ministry of Defense for the Orion project. With reference to the Deputy Minister of Defense Alexei Krivoruchko, it was asserted that the RAN “Pacer” was continuing, and deliveries of serial equipment could begin next year. It may need some refinement of the technology, but as early as next year the army will be able to receive the first production Orions.

If these plans are fulfilled, the Russian armed forces for the first time will receive an average-sized UAV, designed to fly at medium altitudes over a long range and capable of carrying both optical instruments and weapons. While maintaining the current situation, Orion will be able to get ahead of its competitors and become the first reconnaissance-impact UAV of its class adopted for service in our country.

Aircraft "Orion" is based on the normal aerodynamic configuration and has a mid-wing large elongation. A characteristic feature of the machine is a V-shaped tail. In the manufacture of airframes are widely used composite materials, providing an advantageous combination of mass and strength. Prototypes of UAVs are equipped with a Rotax 914 gasoline engine with an 115 horsepower. and a pushing propeller. In the future, the imported engine will be replaced with a domestic product with similar characteristics. 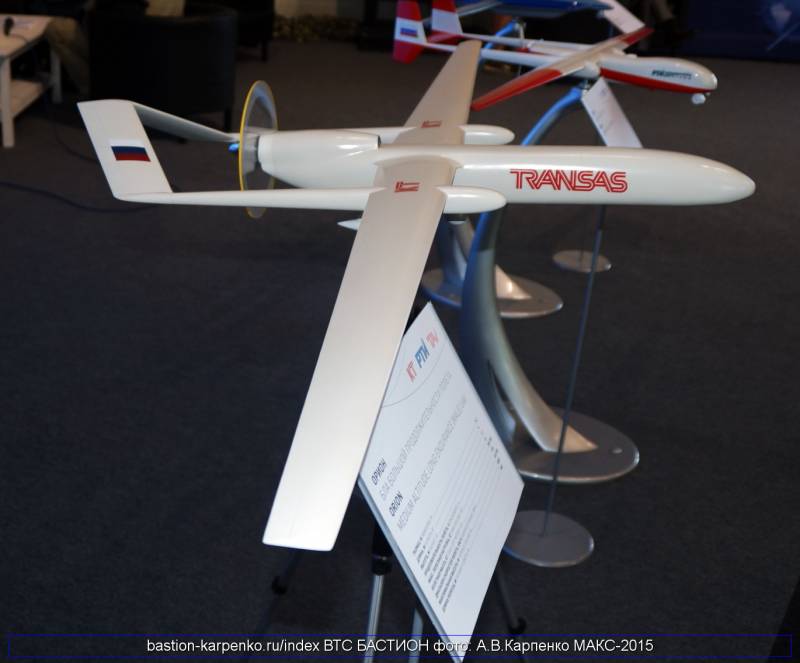 "Orion" is equipped with a survey-sighting optical-electronic system of domestic development, built on the basis of foreign components. It includes cameras for working day and night, as well as a laser rangefinder. The main surveillance and sighting system can be supplemented with a separate module with cameras or a compact domestic radar surveillance station.

With a length of 8 m and a wingspan of the 16 m, the Orion drone has a take-off weight of 1 t. The 200 kg falls on the payload of one type or another. Of greatest interest is the possibility of carrying weapons. Last year, for the first time, Aviaautomatika and Vais-Tekhnika presented the guided weapons complex for UAVs. As part of a joint project, they developed three guided bombs with a caliber of 25 and 50 kg. Such products can be dropped at a distance of tens of kilometers from the target and hit it with a deviation of no more than a few meters. It was alleged that the 25-kg bomb had already been tested on the Orion UAV.

According to recent reports, next year, Orion can go into the series and enter the army. In this case, the equipment of the unmanned complex has not yet been clarified. What devices will carry serial cars and what weapons they will use - is unknown. It is worth expecting that information on this account will appear in the very near future.

December 19 A. Krivoruchko also touched upon the topic of development work with the Altius cipher. Earlier this year there were reports of the termination of this project in connection with the problems of the organization-developer. The Deputy Minister of Defense commented on these reports. According to him, the project is not stopped, although there have been some changes. The project has changed the developer, but work continues. Already next year, the prototype for OTK "Altius" is supposed to be lifted into the air. 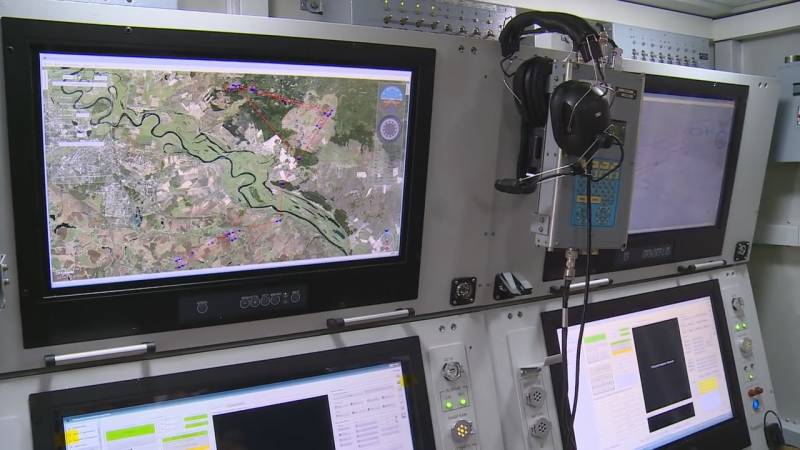 OCR "Altius" was launched in 2011 year. The contract for the development of prospective UAVs was obtained by the Falcon Design Bureau (now the Simonov Design Bureau) and Tranzas. The drone received its own name "Altair". In 2013, a mock-up of the future drone was prepared, reflecting its main features. About the construction and testing of the prototype became known in 2016 year. About a year later, the second experienced Altair was manufactured. In the spring of this year, law enforcement agencies uncovered the facts of embezzlement in the Design Bureau. Simonov, which to some extent influenced the Altius project. In early October, there were reports of the termination of this development work.

However, these reports were not true. Soon the TASS news agency reported that the project was ongoing, but the Ural Civil Plant will now be engaged in its development aviation. However, certain questions arise in connection with statements about the first flight next year: as far as is known, Altair has been flying since 2016. The Izvestia publication, citing its sources, reports that the Altair project is almost ready for the start of mass production. There is also information on the study of issues of ammunition. The ammunition range includes products of different classes and types.

UAV "Altair" / "Altius" is built according to the normal aerodynamic configuration with a high-lying straight wing. At the junctions of the center section and consoles are placed engine nacelles with a pair of engines. Like a number of other UAVs, the Altair has a V-shaped tail. The project provides for the use of two diesel engines RED A03 / V12 with 250 horsepower. with tricolor propellers. According to the technical specification, the take-off mass of the device must reach 5 t, of which 1 t is the payload. Flight range should be brought to 10 thousand km, the duration - to 48 hours. 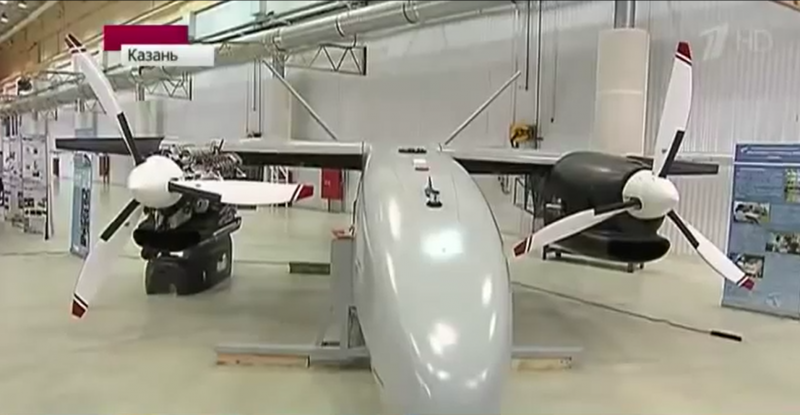 Until recently, the project "Altius" was developed by OKB. Simonov, but for several reasons, it was decided to transfer it to another organization. The following year is planned to continue the necessary work, including a new phase of flight tests. After their completion, Altair will be able to go into mass production. With such an outcome, it will become the largest and heaviest domestic UAV with the highest technical and combat characteristics.

The Future of the Hunter

The next year is scheduled to start testing another heavy-class unmanned aerial vehicle. We are talking about the product with the code "Hunter", created by the company "Sukhoi". A. Krivoruchko called the project “Hunter” a priority. Work on this topic is "at a good level" and close to entering a new stage. Already next spring, the prototype of such a heavy drone should go on flight tests.

A project called “Hunter” started in 2012; its development is the company "Sukhoi". Mention was made of the working designation of the project - C-70. The purpose of the OCD "Hunter" was the creation of a heavy attack and reconnaissance UAV with high performance, capable of attacking the targets of a technically developed enemy. All this made special demands on onboard electronics, controls, etc.

The development of the Hunter project and the subsequent construction of a prototype continued until the middle of 2018. At the end of November, ground tests started with jogging along the runway. Flight tests are scheduled for the next year, but the dates for their completion and the start of new phases have not yet been specified. Previously published information, according to which the mass production of C-70 products will begin in 2020.

"Altair" at the airport. Photo Bmpd.livejournal.com

According to known data, the Hunter UAV is built according to the “flying wing” scheme, and all its main units are placed inside a glider of a characteristic shape. This design of the machine was chosen due to the need to reduce radar visibility. A power plant based on a turbojet engine or engines is used. There are no other technical details. Earlier it was reported that the Hunter’s take-off weight would reach 20 t, and the machine could carry up to several tons of payload in the internal compartments.

In fact, we are talking about creating an unobtrusive unmanned bomber capable of breaking through the enemy’s air defense and using guided weapons against important objects. From the point of view of the design features, the necessary technologies and capabilities of the UAV, the Hunter can be considered a fundamentally new development for our industry. The prospects for such technology in the context of use in the army can not be overestimated.

Judging by the last newsNext year 2019 will be the most important period for the development of the domestic industry of unmanned aerial vehicles. Until the end of next year, the Ministry of Defense and Industry are planning to complete the testing of one of the promising samples, after which its serial construction will begin. Thus, by the 2020, the Russian armed forces will be able to start operating their first reconnaissance-strike UAV of the middle or heavy class.

At the same time, work will continue on several other projects. One of these developments, recently replaced the design organization, will enter a new phase of testing, and the other will have to make its first flight. According to the results of all the necessary tests and other measures, a decision may be made on putting the new equipment into service. As a result, at the disposal of the army will be several samples of UAVs with different characteristics and capabilities. 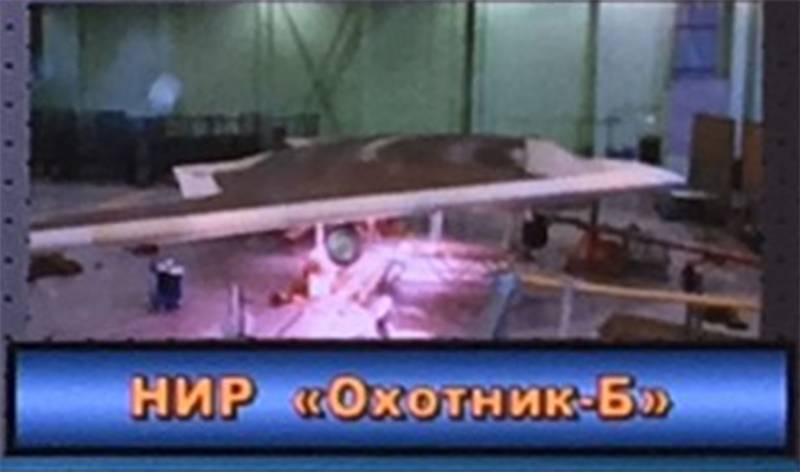 The only known image of the hunter C-70 drone. Photo Bmpd.livejournal.com

It should be noted that "Orion", "Altair" and "Hunter" are not the only promising domestic drones of the medium and heavy categories. At the same time, some other projects of similar classes with similar purpose are being developed. In addition, work continues on the development of the direction of light reconnaissance vehicles. New samples of this class will also appear in the foreseeable future.

There is information about the development of the shock modification of the existing serial reconnaissance UAV "Dozor". Also from scratch developed projects "Thunder" and "Zenica." However, the appearance of ready-made samples of this kind, apparently, should be expected only in a few years - later than the current "Orions" and "Hunters".

Currently, the Russian army is armed with many unmanned aerial vehicles of the light and middle classes. The bulk of such equipment is designed to conduct intelligence in the interests of various departments. Also, UAVs are used as part of communications and electronic warfare systems. Impact machines have not yet been put into service, which until recently was a cause for serious concern. Fortunately, now the situation is changing, and a number of projects of similar devices are approaching the desired final.

According to current plans of the Russian Ministry of Defense, the next 2019 year will be a landmark for the national program to create promising unmanned aerial vehicles. Planned tests of some samples and the supply of others. The positive effects of this are obvious. The army will receive a new material part, and with it new opportunities.