War will not write off everything. Is Ukrainian debt a headache for Russia?

December 21 2018
43
For a short time after Maidan, Ukraine managed to collect debts almost more than anyone else in the world, having paid for them with the collapse of the economy and, it seems, the complete liquidation of the financial system. Ostap Bender knowingly said that the financial abyss is the deepest of all abysses, you can fall into it all your life. I would like to believe that Ukraine, we are not a stranger (whatever it is), it will not touch. However, during the life of the current government, everything seems to continue exactly according to Bender. 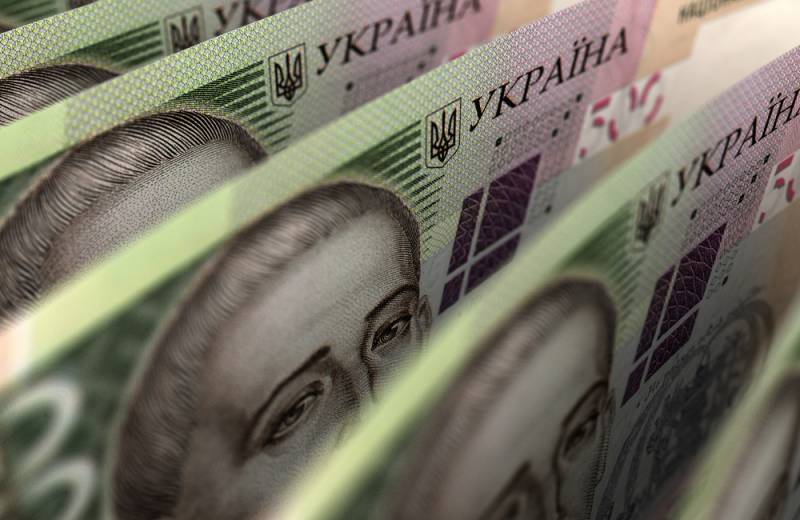 The latest data from the IMF show: Square ranked second in the list of debtors of this organization, and now only Argentina is ahead, which twenty years ago, in the year of default, they even tried to set Russia as an example. “Long-suffering” Greece remained behind Ukraine, where the average pension is 500 euros, but pensioners continue to hold rallies, and some state employees are still demonstrating in defense of the right to 13 and even 14 salaries. But their Prime Minister Tsipras promised the European Commission and the same IMF to cancel more than five years ago.

However, that there is Greece and Argentina, in Kiev, after all, they are accustomed to being equal to Europe and the United States, which no longer owe the IMF and other countries, but their own banks, companies and ... citizens. About how much and what the Maidan politicians owed to the citizens of Ukraine is not to be said. Because citizens are tolerated. They are tolerating and waiting for a new presidential election, in which the chocolate king clearly has to play the role of a completely different king - naked.

The last “chocolate” tranche of the IMF gives Ukraine, without hiding its readiness to “reset” its relationship with the Ukrainian authorities. In the IMF documents it is reported that the total can be about more than 10 billions of dollars in the new 14-month stand-by program. Poroshenko in his triumphant reports had already repeatedly reminded that he had reached an agreement with the “currency traders from the fund” as early as September, but somehow forgets to say that the previous program, which featured a more impressive amount - 17,5 billion dollars, was then curtailed.

At the same time, the conditions were much milder, although this was caused by the “pre-default state” of the country. In this case, they say about a person - “pre-infarction state”, and now the head of the Ukrainian state could be proud of it. However, "while the president" does not want. Most likely, because he himself and his prime ministers with the ministers negotiated with the IMF for each tranche in the manner of girls for extradition. Why - it is clear, I wanted not so much a commission, with the IMF with this strictly, but at least some kind of free hand. So that it was possible to conduct all sorts of conferences and receptions for foreign money, to do some consulting and analysis of investment prospects. We are in Russia more than once and not two passed, and then somehow we decided to wind down all such benches, which we think cannot be forgiven to this day.

In this respect, it is very indicative of the conditions under which Ukraine received another 750 million dollars, but already from the World Bank (WB). Quite official reports have already been received from there that the funds will be directed "to support important reforms in the banking sector, in the fight against corruption, management of agricultural land, subsidies for public utilities, health care, and pension reform."

There are details in the WB materials regarding interest rates, which are not even worth mentioning here. They are simply much lower than the interest rate in 17,5 percent currently in force in Ukraine. And this in itself provides the broadest opportunities for "creativity", of course, financial. Something similar happened again in Russia - in the very 90, when our country was in that same “pre-default state”. And the fact that the deputies are happy about the loans from the IMF and the World Bank, involuntarily makes it necessary to draw parallels with the Russian State Duma twenty years ago. There, too, rejoiced. What

However, these days Poroshenko is literally ready to jump out of his pants, more precisely, from state army riding breeches, just to show his “toughness”. For the sake of the rating you will not go! And even the charity from the IMF can be represented as one of his greatest victories. Along with those that were gained in numerous “boilers” during the ATO. The Ukrainian “for the time being president” managed to subscribe to the 3,9 billion as much, which immediately makes one ask the signatories from the other side (from the IMF): are they sure that Poroshenko’s successors will pay these debts?

Now for Ukraine 14,1 billion debt to the IMF. Of these, only the last 3,9 billion will have to be returned fairly quickly - in those same 14 months. If you don’t borrow more in a big way, then the sum is not the worst, even with a completely failed GDP of this post-country. Only under the condition that the money will not be wasted, and the last still functioning enterprises of the Ukrainian industry of the USA will not drive further and further into a dead end with their sanctions and duties.

No, nobody pushes directly to Ukraine from Washington, it just turns out that Ukrainian metallurgy was in fact a victim of the American-Chinese trade war, a few assembly plants can no longer withstand even price competition with Indian and Chinese branches flooded half the world. Ukraine has no more coal for export, and almost only grain remains from export goods from Ukraine. And it seems that the perspective shines about the Square, about which not the last Tsarist Minister of Finance of Vyshnegradsky spoke yet: “We will not finish ourselves, but we will take them out.”

In the end, for the sake of such amounts that the IMF promises, you can arrange another Maidan. Or (God forbid) to launch a new ATO, accusing Russia of aggression in all corners. In general, acting on the well-known principle "war will write off everything." Will the warnings of Minister Lavrov and the “absolutely accurate” predictions regularly replacing each other with the starting date of the APU attack near Mariupol help us in this case? There are very big doubts. Informational battles we, no matter how offensive, we lose. One after another, and only real things help. So it was with the Crimea, with the reflection of the first and second Ukrainian offensive on the “rebellious” Donbass, so something is happening now in Syria, and also in a dialogue with Italy and France.