Treason, which was not 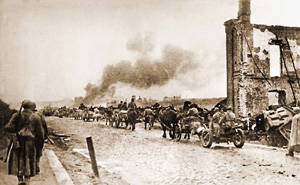 On the Internet on multiple sites placed the material under the name S.G.Pokrovskogo "Treason 1941 of the Year", and 4, 11 and 18 in August, the newspaper Krasnaya Zvezda published an article “The Mysteries of 1941 of the Year”, which is a shortened version of material posted on the Internet.

In fact, no mystery at that time does not exist. Just the author in pursuit of sensation by distortion of facts and events of the initial period of the Great Patriotic War, wanted to create a sensation, and wrote about the change of command of the Western and South-Western fronts, and some army commanders of these fronts in 1941 year, considering the circumstances in which they were the main reasons for the defeat of our troops in the initial period of the war.

The author of the material believes that some commanders deliberately and prematurely withdrew troops from areas where huge reserves were concentrated. weapons, Fuel, ammunition, food, necessary to ensure the conduct of hostilities, and thus provided them with invading fascist troops. But, as you know, the main reasons for the defeat of the Red Army in 1941 were the untimely bringing into combat readiness of the troops of the border military districts, insufficient training and poor moral and fighting qualities of personnel, poor command and control of troops. Such troops could not stop the German offensive and were forced to retreat.

But in support of his far-fetched version, the author does not cite any documents. There are no references to sources of gleaned information in the material. The events of war are distorted. Operational reasoning is primitive, erroneous and insulting to all those who fought, died in the war, and was also convicted and rehabilitated in the postwar years. The statements that our armies in the directions of the main attacks of the Germans (the 8th and 11th armies of the North-Western Front, the 4th Army of the Western Front and the 5th Army of the South-Western Front) were not defeated are also contrived and for a long time successfully fought unlike other armies. He writes that the 11th Army of the Northwest Front and its 11th Mechanized Corps, the weakest in composition, armed tanks T-26, attacked the enemy and knocked him abroad.

But, first of all, the 11 th mechanized corps was part of the 3 th army of the Western Front, and not the 11 th army of the North-Western Front. He had a 241 tank, including T-34 tanks. At that time, there were no such tanks in the German army. The 11 Army and the German 11 Mechanized Corps were not knocked out. Already by the end of the first day of the war, the 11-I army was cut into pieces and its units hurriedly retreated to Kaunas and Vilna. Command to execute the order of the striking and mastering by the end of June 24 Suwalki region, Commander of the Western and North-Western fronts attracted a small force: 48-Rifle and 12-Mechanized Corps. Only the 28 Tank Division was able to occupy the initial position. The remaining divisions of the corps entered into battle with scattered groups and fought heavy battles.

41-Mechanized Corps of the Germans, reflecting the impact, surrounded 12-Mechanized Corps, developing the offensive, on the move captured Daugavpils, crossed the Niemen and created a bridgehead for an attack on Leningrad. Front troops suffered heavy losses. Thus, only three tanks, 5 armored personnel carriers and 3 vehicles had the remnants of the defeated 11 Tank Division of the 12 th mechanized corps of the 40 th army. This division was in the strip of the neighboring Western Front.

The author also invented successful offensive actions of the 4 Army of the Western Front. In reality, the units of the three divisions located in the Brest Fortress could not even get out of it. Mozir fortified divisions of the 4 Army did not hold the month, and their remnants were transferred to the 3 Army. 4-Army from the beginning of the war waged heavy fighting. As the chief of staff of the Sandalal army wrote, from 22 to 26 June, during the five days of the war, the army units were driven back to 300 km. In July, the remnants of army units were withdrawn to the Novozybkov area and subordinated to the 21 Army. The commander of the 4 Army, Major General Korobkov, on July 8, was removed from office and the Military Collegium of the Supreme Court was sentenced to be shot for cowardice, disintegrated control and unauthorized abandonment of positions. In November, 1957 was posthumously rehabilitated.

It looks ridiculous author's allegation that 5-Army of the Southwestern Front struck 150 strokes repel the 11 German divisions, having 300 2400 km front of all people. Archival documents such actions of the army are not confirmed. Consequently, Pokrovsky’s claim that the armies of the fronts, which were in the direction of the main attacks of the German fascist army groups, were not defeated and successfully fought, do not correspond to reality.

As for the actions of the 12th Army of the Southwestern Front, the author here is also at odds with facts and reality. So, the statement that the blow aviation June 25 army at facilities in Hungary provoked the entry of Budapest into the war, is far from the truth. Long before the war, the Hungarian government signed an agreement with Hitler Germany on military cooperation, and its troops were included in the German Army Group South. The position that the 12th Army did not fight at the beginning of the war does not stand up to criticism either. Yes, sometimes the army’s withdrawal was premature, but one cannot agree that the army commander Ponedelin deliberately led her into the Uman’s cauldron and surrendered. While in German captivity, he rejected Vlasov’s offer of cooperation and spat in his face.

Pokrovsky indiscriminately accuses many commanders of deliberately failing to comply with the directives of Moscow, in particular the directive of the High Command issued in 21.10 22 in June 1941 of the year. It set tasks for the North-Western, Western and South-Western fronts to deliver powerful blows and seize the Suwalki region and Lublin by the end of June 24. To accomplish this, the North-Western Front singled out the mechanized and rifle corps, and the Western Front - the mechanized corps and the cavalry division. Some mechanized corps of the Southwestern Front were located at a distance of 300 – 400 km from Lublin, they needed 3 – 4 days to extend and concentrate.

It is not true that the troops of the 3 Army of the Western Front were located in 20 km from Suvalki and had the opportunity to fire long-range artillery (which it did not have) on the area.

The implementation of this directive was unrealistic, and this complicated the situation and the organization of repelling the enemy’s offensive.

With regard to the application of the counter-strike of the South-Western Front at the end of June 1941, in the area of ​​Brody, Lutsk, Rovno, the author considers it to be fighting in his rear. Four mechanized corps were required to make marches for a considerable distance. Only the 8 th Ryabyshev mechanized corps was able to get out of the tank line to the starting line in time, the motorized infantry fell behind. The corps attacked the enemy at different times and were unsuccessful. Only the 8 Mechanic Corps advanced 30 – 35 km and broke into Brody, creating a serious threat to the advancing German units. The author asks - did the Mechanized Corps fight? Yes, they fought, but they fought badly. The commanders of the fronts and armies used them ineptly, set unrealistic tasks for them, often changing them. As a result, they made unnecessary lengthy marches up to 400 – 500 km, leaving up to half of all the tanks on the roads. At the same time, not only as a result of enemy air raids, but also because of poor training of tank drivers and commanders, untimely provision of fuel and lubricants and the repair of damaged vehicles.

Passage of Vlasov, the passive fighting 4-Mechanized Corps in the Lviv region, and its betrayal in 1942 was no reason to link the two events, and to believe that he was a member of the great conspiracy against the Germans in 1941 year. The author's argument about the defeat at Vyazma, "Vyazemsky cauldron", that it was allegedly caused by the location of nine divisions of the national militia in the first echelon of the front in the Vyazma region, is primitive and untenable. One of the main reasons for the defeat of the Western and Reserve fronts that rate and the command of these fronts to concentrate the main forces in the area of ​​Vyazma, German Army Group "Center" has dealt a major blow to the north and south of Vyazma, surrounded the main forces of the two fronts. At the same time, the Reserve Front was located unsuccessfully - its two armies were located in the first echelon, and four armies in the second echelon on the front, up to 400 km behind the Western Front. Without a vehicle, they could not advance to breakout areas in time.

The author writes: “On the verge of collapse, the Soviet country was put not by the power of the German divisions, not by the lack of professionalism of our soldiers and officers of the 1941 of the year, but by betrayal, carefully prepared, thought out, planned. The betrayal, which was taken into account by the Germans ... The enemy was helped by Russian officers and generals ... ”Such a position regarding the most complicated problem is a deep misconception of Pokrovsky and obvious slander, discrediting the Red Army.

I would like to note a strange position regarding the material of the Pokrovsky newspaper “Krasnaya Zvezda”, on whose pages in three August issues an abridged version of the material “The Mysteries of 1941 of the Year” was published. No one takes away the right of a newspaper to publish such materials. But given the fact that the newspaper "Krasnaya Zvezda" is an organ of the Ministry of Defense of the Russian Federation, one would expect a clear and reasonable position on such articles.