December 18 2018
17
British Defense Secretary Gavin Williamson opened the project presentation on the margins of the Farnborough air show with the words:
“Let's be clear: we are entering a dangerous new era. Therefore, our focus should be on the future and how we respond to emerging threats. Today, we offer you a glimpse into tomorrow, and we will start with the layout that stands next to me. Tempest (Storm) is a promising fighter of the future with an advanced power plant and power engineering, a virtual cockpit integrated into a “swarm”, with the latest weapons, including laser weapon. Piloted or unmanned, it will be rapidly upgraded and resistant to cyber attacks. "

The Team Tempest team, which is included in the program “Technology Initiative to Create a Perspective aviation combat system "(FCAS Technology Initiative, FCASTI). It is worth mentioning separately that the British were engaged in the development of the sixth generation fighter at once, having no experience of working on the fifth generation machines. Team Tempest consists of Air Force specialists from the Rapid Capabilities Office (RCO), the Defense Science and Technology Laboratory (DSTL), and the DE&S (Defense Equipment and Support) Defense Procurement and Supply Organization. Hardware developers are: BAE Systems, responsible for the airframe and overall integration of all systems; Leonardo, developing sensors and avionics; MBDA working on fighter armament; Rolls-Royce - engines and power plants. That is, the project cannot be called exclusively British. 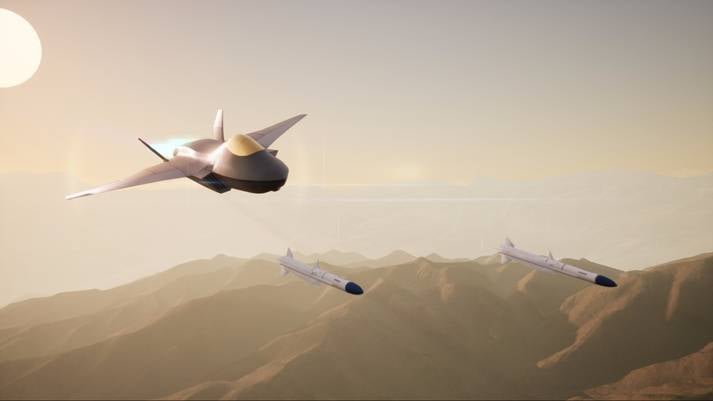 Tempest so far only flies in animation.

Interestingly, the concept of Tempest emerged from the stillborn "Report on Strategic Defense and Security" from 2015 year, whose provisions, calculated for five years, turned out to be impossible due to the abrupt change of threats to national security of Great Britain. The MDP (Modernization Defense Program) “The Defense Modernization Program”, designed to ensure more efficient use of the modest British defense budget, became the successor. The fact is that the Ministry of Defense of England does not have enough money to fully meet the needs for the purchase of new equipment. The deficit of the defense budget in the coming years in the most pessimistic scenario could be more than 20 billion pounds. In many ways, this was the fault of the notorious “brexit”, which distracted the attention of the cabinet of ministers from defense subjects. The development program of the new fighter must be approved before the end of 2020, the development money is planned to be issued by 2025, and the project itself is supposed to be withdrawn for operational readiness only by 2035. At the same time, the British are planning to get by with the development of a largely revolutionary fighter with “little blood” - just 10 billion pounds. The first contract has already been signed - BAE Systems 3 July 2018 received money for the 12 monthly fighter concept and technology development cycle.

Layout at Farnborough Show in July 2018

The Tempest layout is a classic “tailless” with a so-called “lambda-wing” of a large area and two-tail vertical plumage. As expected, the full-scale model in Farnborough was installed on the Tornado chassis. Approximate dimensions: length - 18 m, wing span - 13 m, height - 4 m. The highlight of the British aircraft of the future will be a “wearable cockpit” with elements of augmented and virtual reality, as well as a gesture control system. The last British, obviously, spied at the interface of cars BMW 7 series. Graphic information is displayed on the helmet mounted display unit of augmented reality, in the role of which Striker II acts so far. In fact, the Tempest cabin should lose almost all traditional indicators and displays. In each specific case of the combat mission, the set of the virtual dashboard will be different. 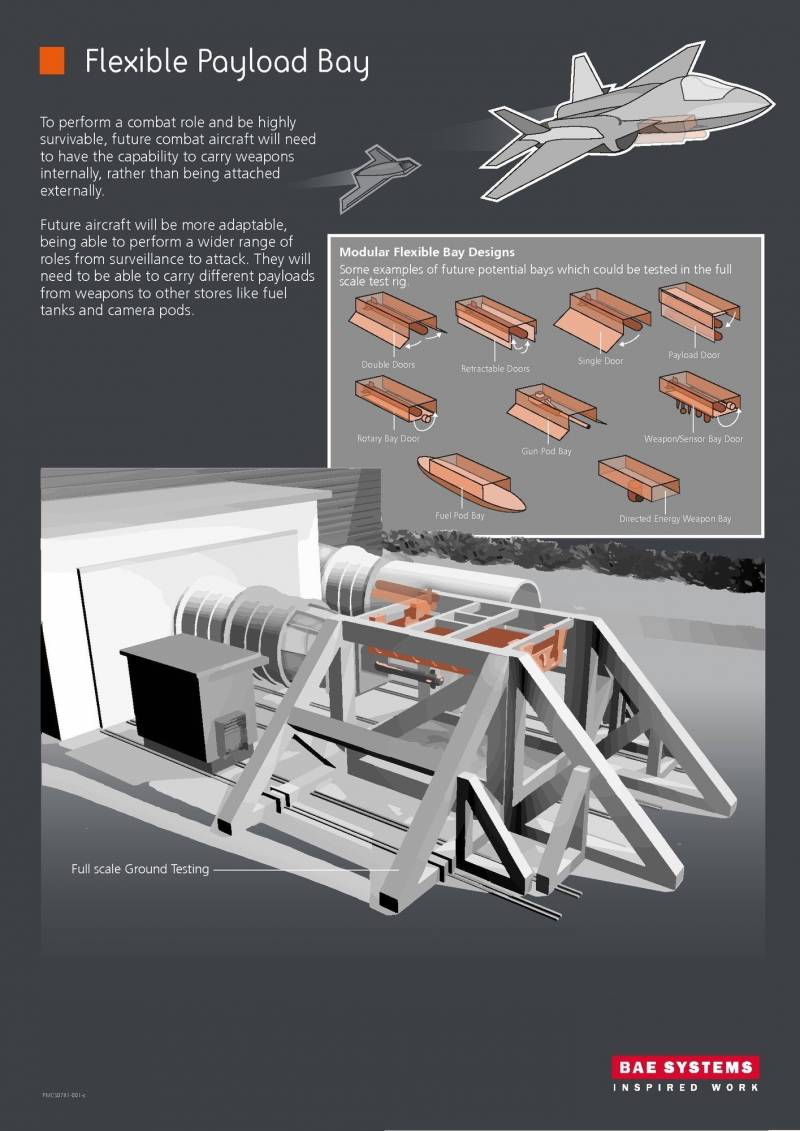 The new aircraft should have a modern multifunctional - it can be quickly reconfigured and upgraded for specific tactical tasks. A particular example of this approach is the multifunctional cargo compartment (Flexible Payload Bay), which BAE System has been working at the Wharton plant for several years. Aircraft technicians will be able to change the volume of the compartment, its configuration, the mechanism for opening the flaps and even the flaps themselves. It is assumed that cheap and compact drones developed under the secret program LANCA may be hidden inside the aircraft. 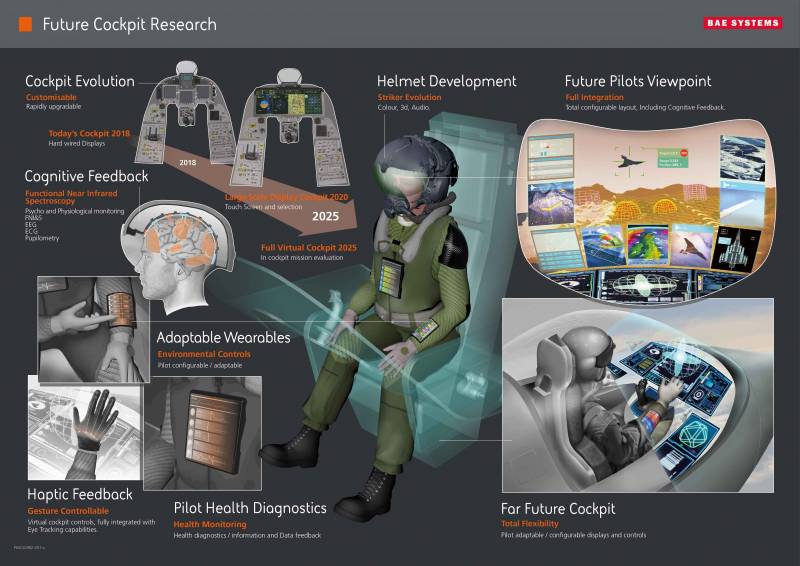 If we touch on the weapons of a promising aircraft, then Meteor air-to-air missiles and SPEAR 3 guided munitions were presented at Farnborough. Of course, the range of portable weapons will be much more - here and hypersonic missiles, and anti-ship ammunition, as well as microwave and laser weapons. If necessary, Tempest can be quickly converted from a manned version into a fully unmanned aerial vehicle controlled by artificial intelligence. On this occasion, skepticism was expressed by Chief of Staff of the Air Force of Great Britain Stephen Hillner:
“People have long realized that it is not so easy to use unmanned systems in difficult situational situations. In addition, there are still problems of a moral and ethical nature. ” 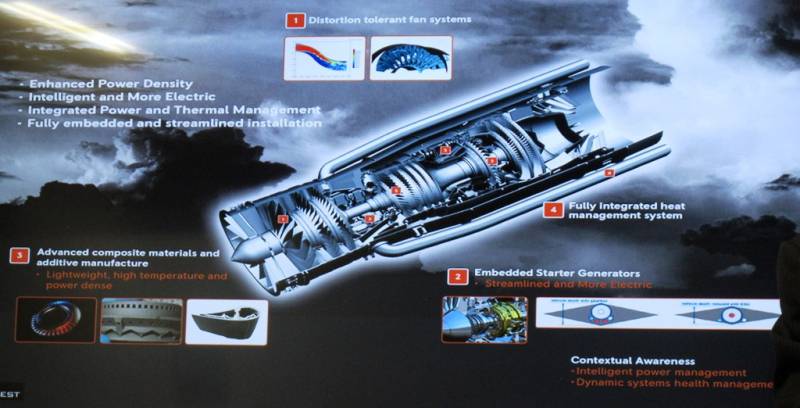 Rolls-Royce at the Farnborough Summer Air Show spoke about the concept of a new engine for a fighter. It is a variable cycle three-circuit jet engine, having a three-stage low-pressure compressor with a wide-chord fan, a five-stage high-pressure compressor, a single-stage high-pressure turbine and a two-stage low-pressure turbine. The starter-generator is integrated into the engine, which, due to its compactness, reduces the midsection of the aircraft, and also feeds a whole range of systems from on-board sensors to combat lasers. All work on the new power plant, of course, are classified and carry the Advance 1 cipher. The most interesting thing is that Tempest will not replace the F-35, but only complement its capabilities. The Department of Defense is not going to refuse further purchases of 138 American aircraft, with which Britain will live another forty years. About the prospects of the sixth generation, the Chief of Staff of the Air Force, Hillier, more bravely expressed himself when he said that in the end England would become almost a world leader in this field. For this, if you believe the chief of staff, there is everything - and engineering personnel, and invaluable experience. But BAE Systems chef Charles Woodburn is not so categorical in his judgments: “Our opinion is that the creation of the next generation aviation systems is a“ team sport ”, and using the football analogy, we need the strongest players on the field, and in our interests to make exactly". Apparently, not so extensive staff of engineers, and not so wide competence. As a result, interest in the "common cause" Tempest has already shown and Boeing, and SAAB, and even Lockheed Martin.

Competitors on the other side of the Channel from Airbus do not particularly want to see the English car in the sky and are looking for new reasons for consolidating the efforts of the pan-European project. So, the head of the aircraft company Tom Enders at Farnborough said:
“The time has come to seriously think about consolidation and uniting efforts in one direction. There is no room for three different programs to create a fighter of a new generation, there is no room even for two. If we really want the next generation to be competitive with Americans, we all need to unite. This is an imperative for industry. ”

Dassault boss Eric Trappier, on the contrary, praised the project:
"This is good news. At the start of 2000, Britain did not see the need to build its own fighter and instead ordered an F-35. I see the English are awake. ”