8 2012 June
15
The T-54 tank was developed in 1946 in Nizhny Tagil in KB under the leadership of A.A. Morozova. The basis was taken on the medium tank T-44. On development stage tank the designation "Object 137" was assigned. It was adopted by the USSR Army in 1946. Serial production was organized in Omsk, Nizhny Tagil and Kharkov. During the production of the tank, the modernization of the tank was carried out, but the brand did not change. 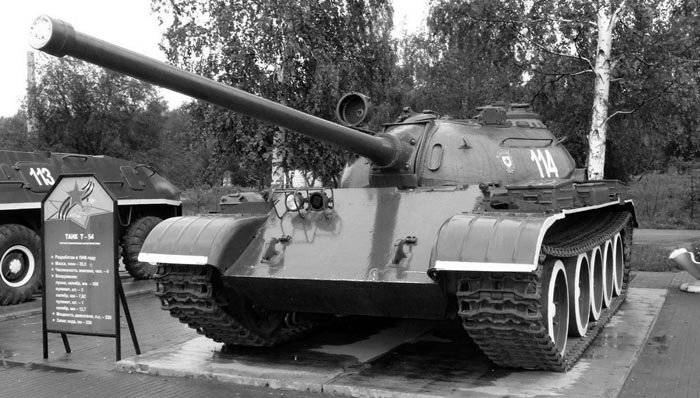 In the tank was implemented a classic layout and traditional placement of the crew in the tower: the commander and gunner were to the left of the gun, loader - to the right. The engine was located transversely in the aft part, which, by reducing the size of the engine compartment, increased the crew compartment and installed an 100-mm cannon on the medium tank.

Unlike all previous tanks when installing the gun, it was wound into the embrasure of the turret with a muzzle cut forward. The embrasure of the tower is inclined towards the bow of the hull, so it had a small width equal to 400 millimeters. Thus, the security of the frontal part of the turret was improved, but at the same time the replacement of the gun in the “field” conditions was complicated.

Thanks to the general layout of the tank, the turret was shifted towards the stern and the driver’s hatch was located on the turret of the hull. This made it possible to significantly enhance the counterhard resistance of the nose section of the hull due to the absence of a manhole in the upper front sheet, its thickness increased to 120 millimeters, and the angle of inclination was 60 degrees. In this case, the shift to the left of the longitudinal axis of the body of the hatch of the mechanic-driver required the driver to have certain driving skills while overcoming limited passes. 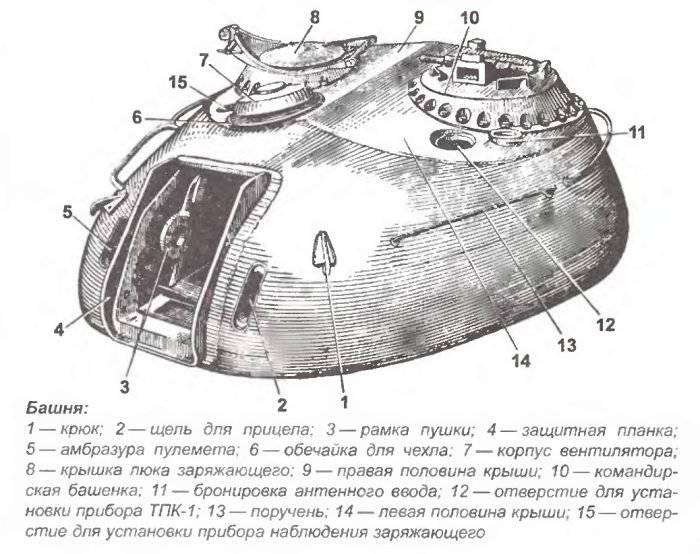 The hemispherical cast tower originally had a zaman (reverse bevel) around the perimeter at the bottom. The reverse bevel was a weakened zone of armor protection, so it was eliminated on subsequent releases of tanks during the modernization. Increased security of the tank with the condition of limited mass in 36 t. Was achieved and a dense layout of systems and assemblies.

The tank's armament consisted of twin 100-millimeter rifled gun D-10T and machine gun SG-43, 7,62-millimeter couple coursework guns SG-43, nadgusenichnyh placed on shelves in armored boxes and 12,7-millimeter anti-aircraft gun DSK. The gun ammunition included 34 shot with armor-piercing and fragmentation shells. An armor-piercing projectile at a distance of 2 with a thousand meters penetrated vertically positioned armor with a thickness of 155 millimeters. The design of the gun was so successful that its more than 40 years without any changes installed on serial modifications of the T-54 and T-55. 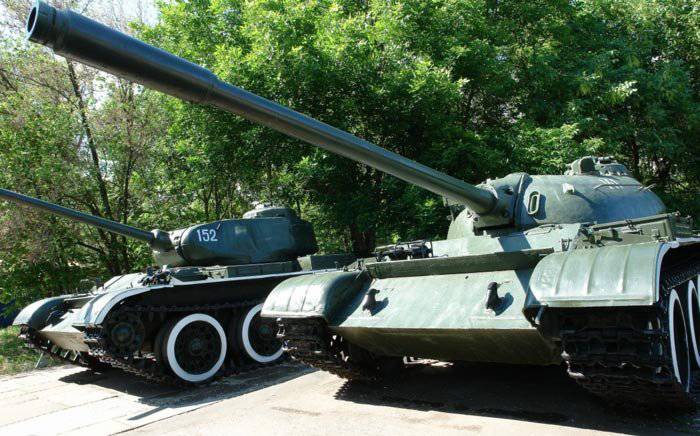 The B-54 engine was the development of the B-2 type diesel engine design. The cruising range of the tank was equal to 330 kilometers with a fuel reserve of 730 liters.

Tanks of the first editions were equipped with a mechanical transmission consisting of an input gearbox with a steel crankcase and forced lubrication, a dry multi-disk main friction clutch, a five-speed gearbox with two inertial synchronizers, simple single-row final drives and a steering mechanism. As a turning mechanism, two-stage planetary mechanisms were used, which provide two calculated turning radii and the possibility of increasing the thrust force (short-term) in straight-line motion due to simultaneous transfer to the first position of the control levers without gear changes. 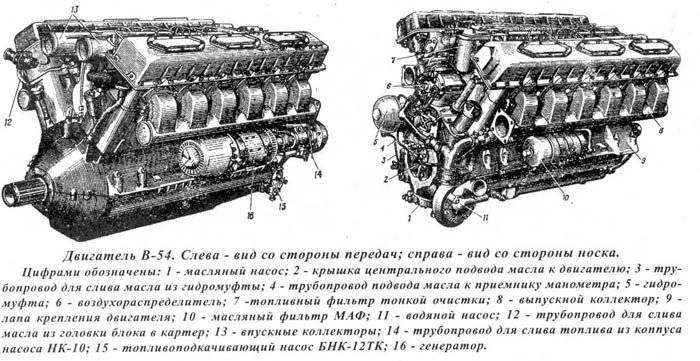 Torsional individual suspension of the tank with blade hydraulic shock absorbers on the rear and front nodes. The fine-grained 90 truck track with an open metal hinge had developed lugs and pinching engagement with the drive wheel. Initially, the caterpillar width was 500 millimeters.

The tank used semi-automatic carbon dioxide fire-fighting equipment. Outside the stern of the hull were installed two smoke bombs MDHS. The communication means was the radio station 10-РТ-26, for the internal communication the tank intercom system TPU-47 was used. Medium tank T-54 developed without taking into account the possibility of movement under water.

During the modernization of the medium tank T-54, a new turret was installed on it, which did not have reverse bevels along the lower perimeter, and was equipped with a single course gun in the control compartment instead of a pair of machine guns that were placed on the nadgussenichny regiments. The TS-20 telescopic sight was replaced with a TSH2-22 sight with 3, 5 and 7 multiple magnification. In addition, a tank nozzle heater, an air cleaner having an ejection suction of dust, caterpillars millimeters 51 wide and a modified guitar design were introduced from 580. To preserve the specified mass of the medium tank, the thickness of the upper front hull sheet was reduced to 100 with 120 millimeters. The maximum thickness of the frontal part of the turret (200 millimeters) and the hull side plates (80 millimeters) were not changed. 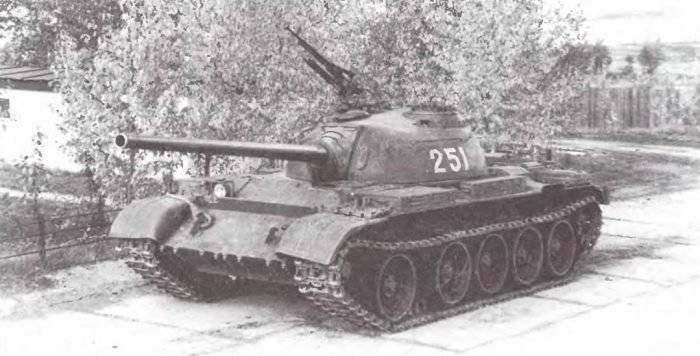 On the basis of the T-54 created a flamethrower tank TO-54 and a commander tank T-54K. The commander tank was developed in the 54 year and adopted by the 58 year. It differed from the linear tank by the presence of a short-wave radio station P-112 and also a benzoelectric charging unit that was used to power consumers in the event of long-term work in the parking lot. The machine gun SGMT was saved.

With the use of units and units of the T-54 tank, ZSU-57-2 and SU-122 were developed and mass-produced, MTU bridge laying machine, SPK-12G self-propelled crane and BTS-2 armored vehicle. A part of the tanks was adapted for attaching the PT-54 roller mine sweep, the STU snowplow, the BTU tank bulldozer and the PST-54 individual watercraft. 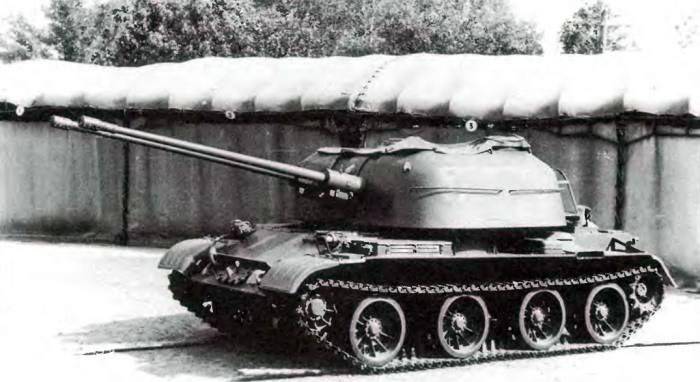 It was created two modifications of the tank T-54 - T-54A and T-54B. The T-54 tank and its modifications were exported to 39 countries.

In Nizhny Tagil KB under the leadership of L.N. Kartseva developed the medium tank T-54А, which was adopted in 1955 year. Serial production was conducted from 55-th to 57-th years in Nizhny Tagil, Kharkov and Omsk. 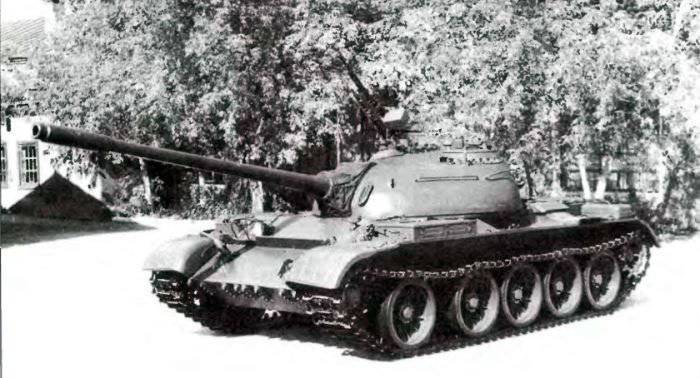 For the first time in the domestic tank building, a D-10ТG gun with a stabilizer in the vertical plane Horizon STP-1 and an ejector for barrel purging after a shot were installed on the mass-produced tank. The data of those. the solutions were the beginning of a large work of design teams in this field and at the end of the first post-war period the tanks that were in service with the Soviet Army were equipped with a two-plane gun stabilizer for aimed fire while driving and an ejector reducing the gas content of the combat compartment.

A stepped air cleaner was installed in the power plant, as well as controlled radiator shutters to maintain optimum engine performance.

An infrared night vision device TVN-1 was introduced for the driver, which was put into service in 1951. The communication means was the radio stations TPU P-120 and P-113. 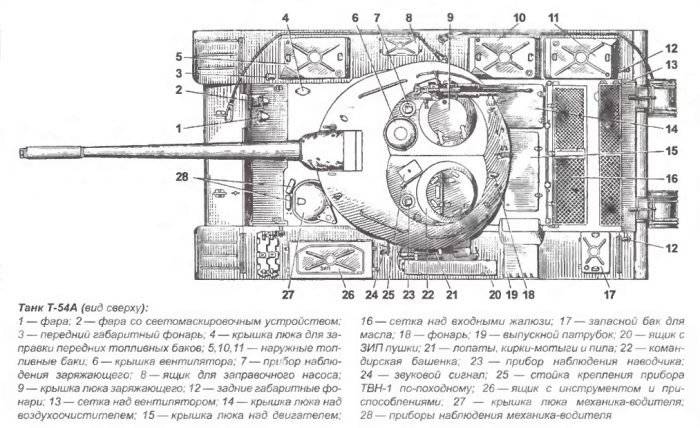 On the basis of the T-54A tank, they created a T-54AK tank commander, adopted by 1958. This tank was mass-produced and differed from the linear model by the presence of an additional machine commander. radio station P-112 and in the control unit of the charging unit. Installation course machine gun SGMT saved.

In Nizhny Tagil in the design office headed by L.N. Kartsev developed the medium tank T-54B. By order of the USSR Ministry of Defense from 11.09.1956, this tank was put into service. Serial production was organized in the period from 1957 to 1959 of the year in Nizhny Tagil, Kharkov and Omsk. 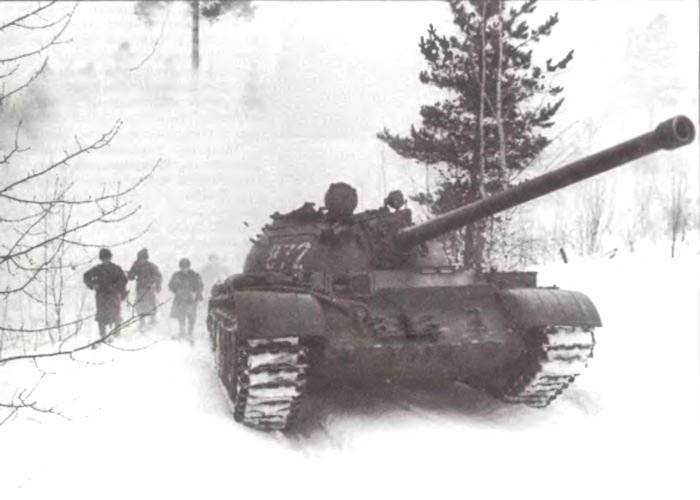 The main armament was the gun D-10Т2С having a two-plane stabilizer STP-2 "Cyclone". In the ammunition guns, high-explosive fragmentation, armor-piercing-subcaliber and armor-piercing-cumulative shells.

A third outer tank was added to the fuel system, so the stock of transportable fuel increased to 1212 liters, and the power reserve to 430 kilometers. For the first time in the domestic tank building, equipment for underwater driving (OPVT) was installed on this serial tank, which made it possible to overcome along the bottom of the obstacle, the maximum depth of which is 5 meters and 700 width of meters. Time of movement under water was limited, as there was a danger of overheating of the engine, because when installing OPVT they sealed the roof of the engine compartment. Some tanks adapted for work with the KMT-4М and -5М mine trawls. 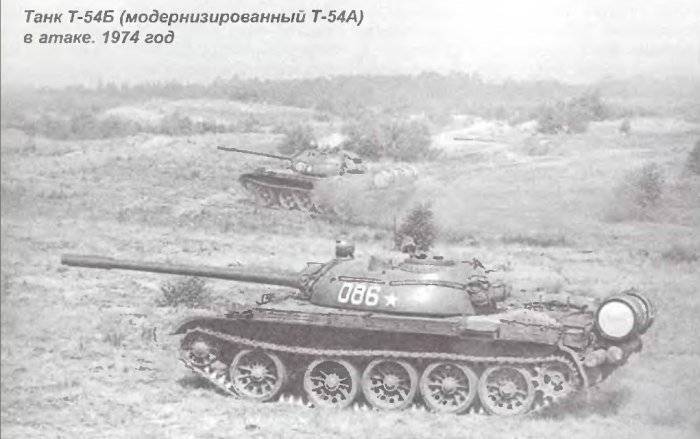 The T-54B tank served as the basis for the creation of the T-54BK commander tank, which was put into service in 58. From the linear tank different installation add. shortwave radio P-112, charging unit AB-1-P / 30 and navigation equipment. Saved the installation of the course gun SGMT.

On the basis of the T-54 and T-55 tanks, the OT-54 tank was created which had ATO-54 and ATO-200 automatic flamethrowers installed in the tank turret instead of a coaxial machine gun. The ejection of the flame-thrower mixture was made in portions of the jet, with one shot ejected about 6-8 liters of the mixture. This design made it possible to expand fire capabilities while maintaining all the characteristics of a linear tank in terms of armament, mobility and protection, without changing its appearance. 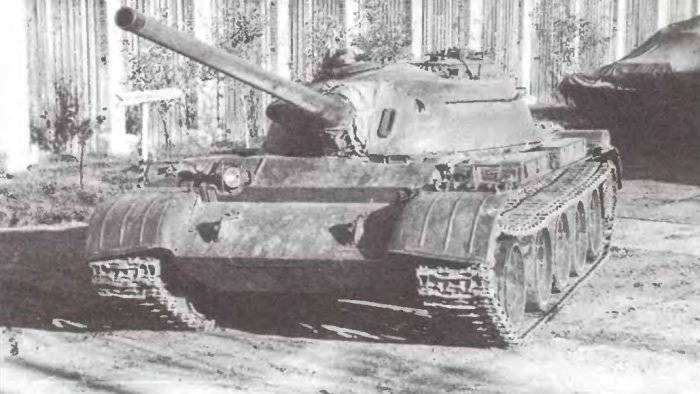 The tanks, which were equipped with these flamethrower systems, were capable of throwing fire mix to the range of 160 meters at a speed of up to twenty rounds per minute.

The upgraded version of the T-54 was the medium tank T-54M. 18.03.1977, this tank was adopted by the order of the Ministry of Defense of the USSR and was produced by the plants of the cap. repair.

The upgraded tank was distinguished by the use of units, instruments and systems developed for the T-55 to which the X-NUMX mm D-100-T10C rifled gun (ammunition 2 shot), a laser range finder KDT-43, a Cyclone weapon stabilizer, were aimed. having a stabilized aiming line, night infrared devices of the gunner and commander, two PKT machine guns (1 ammunition, 3 thousand cartridges) and DShKM anti-aircraft machine gun (5 ammunition cartridges). 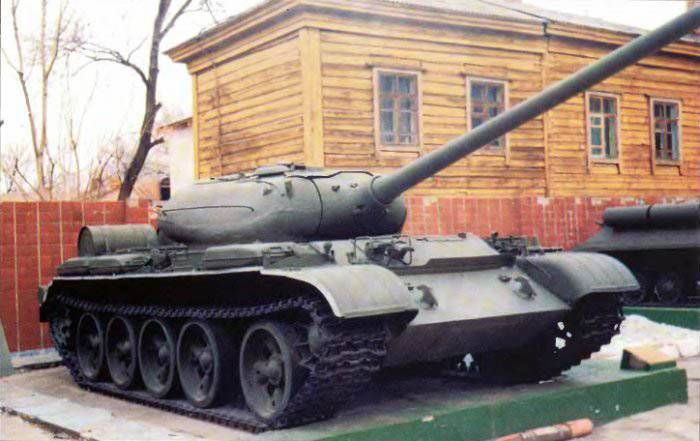 The B-55 (B-55B) engine with horsepower 580 (426 kW), as well as the TDA, PPO and PAZ systems were installed in the tank. All tanks were adapted to hang KMT-4 or -6 mine trawls. The combat weight of the upgraded machines increased to 36,5 tons.

The T-54М tank was the base for the T-54МК commander tank. Among the differences: additional shortwave radio station P-112, THA-4 and charging unit.

The T-54A tank went through a similar upgrade and was called the T-54AM.