December 17 2018
2
The radio intelligence of the German forces in the PRC successfully intercepted the radio communications of the Russian army headquarters and corps radio stations 1 and 2, which were launched in August 1914 in East Prussia. Unfortunately, this was a result of open disregard for the rule of secrecy by Russian troops: often operational orders of army commanders were aired in clear text. In many ways, this situation has developed due to the weak provision of ciphers. General Hindenburg and his 8 Army were well aware of the intentions and movement of the Russian troops. The outcome of this was the catastrophe of the East Prussian offensive operation.


The Germans left the 1-th army barrier of Pavel Karlovich Rennekampf, and the 2-th army of General Alexander Vasilyevich Samsonov was surrounded and defeated. In this regard, the German General Hoffmann wrote:
“The Russian radio station transmitted the order in an unencrypted form, and we intercepted it. It was the first of a number of countless orders, transmitted from the Russians at first with incredible levity. Such levity greatly facilitated the conduct of war in the East, sometimes it was only because of him that it was possible to conduct operations in general. ”

For the sake of fairness, it is worth mentioning that the Germans had previously behaved in a similar way: they translated the text into radio broadcasts without any preparation, which helped the French in the battle of Marne in September 1914.

In the First World War, a somewhat paradoxical situation developed: the special services preferred not to jam the enemy's radio stations, but to intercept messages with subsequent decryption. Moreover, none of the belligerents had any serious message encryption mechanisms. In fleets England and the United States were actively introducing methods of direction finding of radio transmissions of German submarines, which made it possible to direct attack ships to their deployment areas. Since 1915, on the Western Front, the British and French have adopted radio goniometric systems to determine the location of enemy headquarters radio stations. Later, a similar technique came to all countries involved in the world conflict. For example, the Russian army in the middle of 1915 had 24 radio direction-finding stations, which were subordinate to the army headquarters. The radio intelligence service of the Baltic Fleet, under the leadership of Admiral Adrian Ivanovich Nepenin, was one of the most effective units in its field. 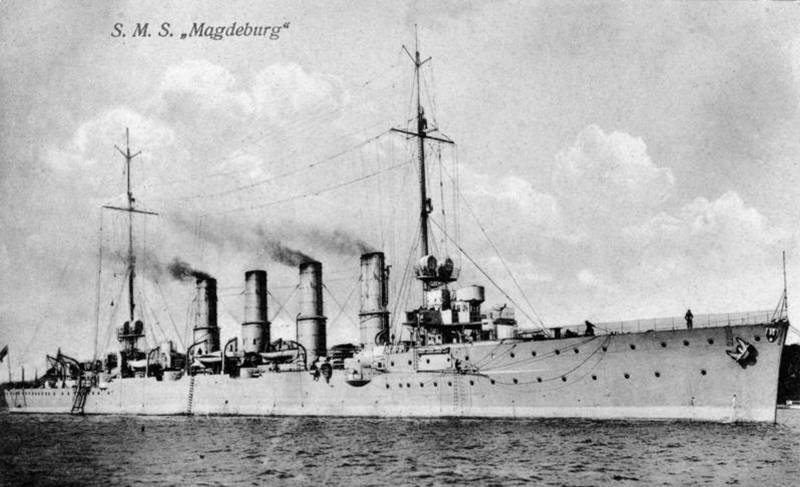 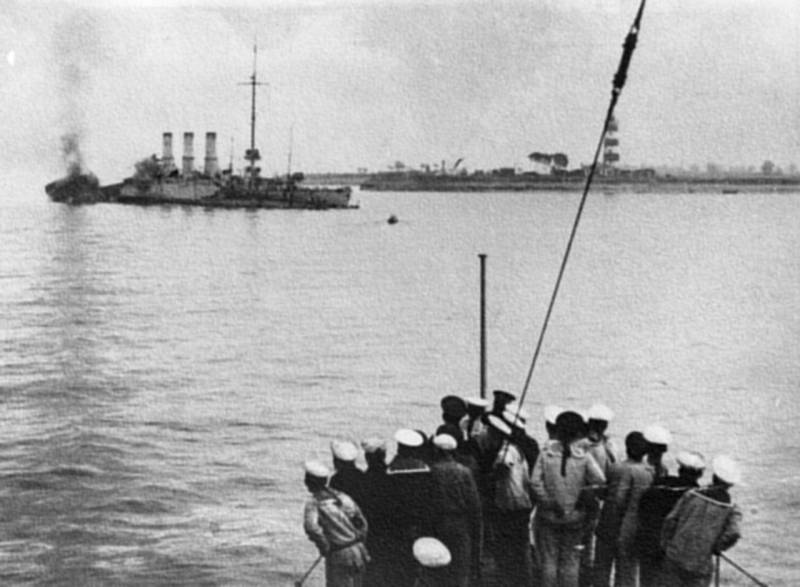 In many ways, the success of the service was ensured by the crash on the Baltic 26 August 1914, the old style of the light cruiser Magdeburg. The point is in his signal books and encryption documents, which he managed to lift from the bottom of the Russian sea divers. In addition, the intelligence work of the coalition intelligence provided invaluable assistance. The Russian fleet in 1914-1915 had a whole range of the latest ship and coast radio direction-finding stations. Eight such posts worked at once directly on the Baltic. 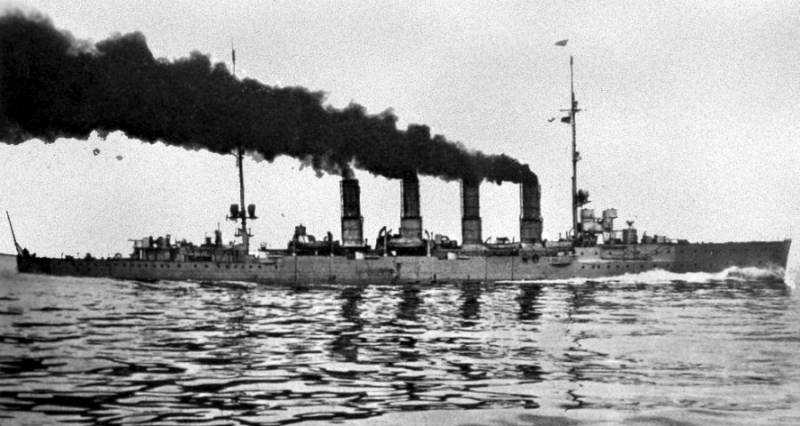 Among the few episodes of radio interference, the work of the German cruisers Goeben and Breslau on “jamming” the radio signals of British ships during the German breakthrough through the Mediterranean to Turkey in August 1914 was best known. On the side of the German fleet were powerful and modern for their time radio stations Telefunken, a signal which suppressed the outdated British technology.

There is information about the use by the Western allies of interference and spurious radio guidance signals in relation to the radio stations of German zeppelin airships that raided the UK. Thus, during a large 11 raid of “zeppelins” on England 19-20 in October 1917, the transmission of spurious radio signals by a powerful radio transmitter from the Eiffel Tower in Paris, retransmitted by another radio station, led to the disorientation of the radio “zeppelin” who used German radio signals for night navigation. The tactic turned out to be very effective - two airships, L50 and L55, were so disoriented that they crashed in bad weather and visibility. The fighters of France and Great Britain also coped well with the defensive mission and shot down three more zeppelin. 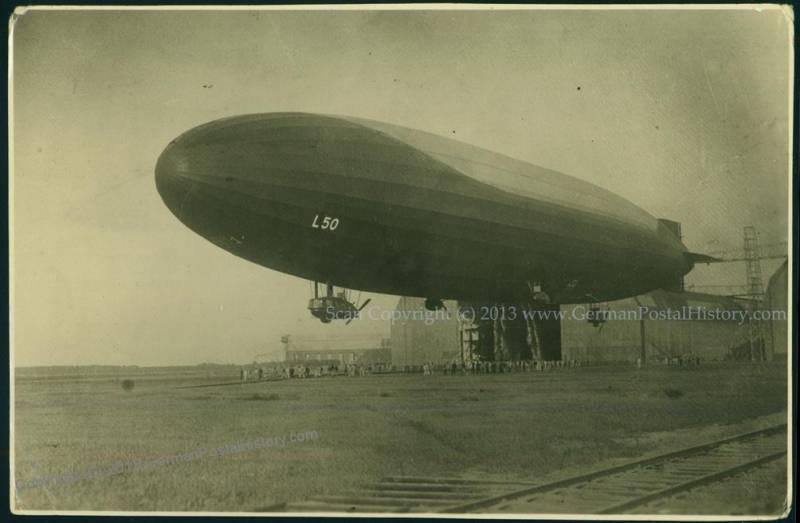 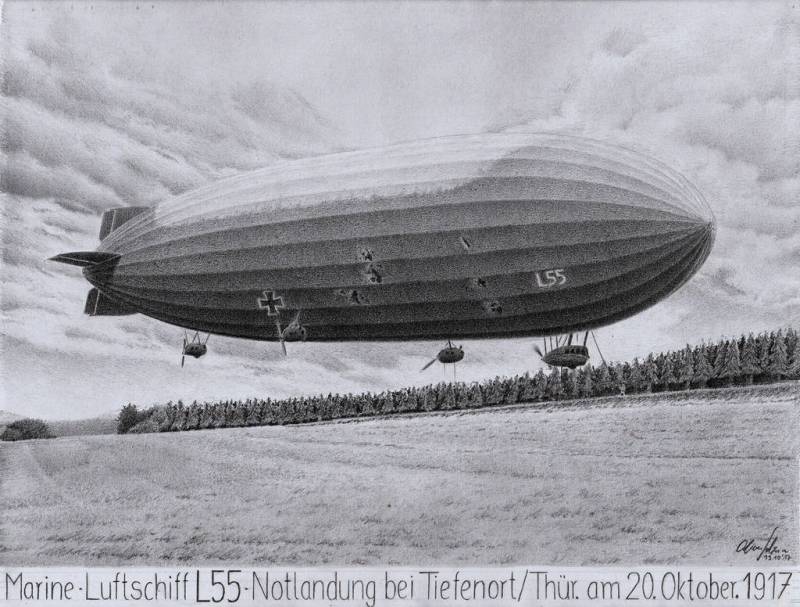 L50 and L55 - airships killed during a raid on the British Isles. They were among the first victims of electronic warfare.

In World War II, electronic warfare finally took shape as an important direction in the development of military thought and technology. The primary task that was set for EW was the counteraction of the novelty of those years - the radar station. Before the war, Germany and Britain began deploying a radar network to detect and track aviation the enemy. They put into service and ship radars that are engaged in the detection of surface, air targets, as well as participating in fire control. The Chain Home radar system along the English Channel and the east coast in the UK was created back in 1937-1938 and consisted of 20 AMES (Air Ministry Experimental Station) Type I radars operating in the range of 10-15 meters. Later, in 1939, the British skeleton radar shield was supplemented with low-altitude detectors Chain Home Low or AMES Type II with a reduced wavelength. AMES Type V became the most advanced radar generation, with a radio wavelength of only 1,5 meters and an air target detection range of over 350 km. Now we had to reckon with such a threat, and engineers in the military departments began to develop systems for both radar detection and suppression. The leaders of the pre-war time in this direction were Great Britain and Germany. 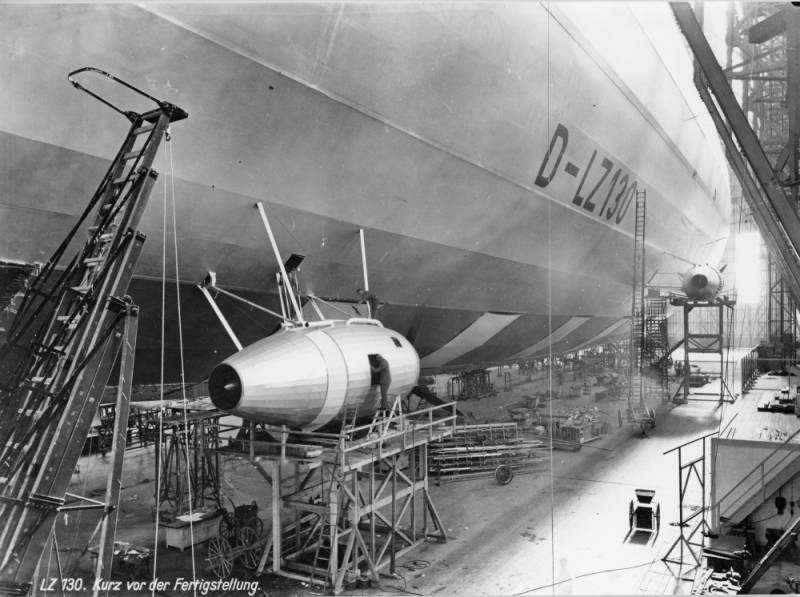 The Germans in 1939 year (May 31 and August 2-4) decided to monitor the new English system Home Chain and equipped for this the airship LZ 130 Graf Zeppelin. The flying spy was equipped with electronic intelligence equipment and had to locate all British radars. But England's air defenses turned off all the locators in advance, and the airship went home without a jerry. Until now, historians are not able to explain - the British turned off the equipment only at the sight of the airship, saw through its mission, or knew in advance about the tasks of the zeppelin from the agent's sources. It is noteworthy that the Germans still experienced additional difficulties from their own coastal navigation system Knickbein, which operated in the centimeter range and interfered with LZ 130 Graf Zeppelin reconnaissance equipment.

It was Knickbein that became a priority target for British EW specialists from the very beginning of the war - German bombers used this radionavigation during raids on the islands. The British obtained basic data on Knickebein parameters from intelligence sources in 1940, and immediately began to work out measures to suppress it. Avro Anson aircraft equipped with a set of American radio Halicrafters S-27, operating in the range 30-33 MHz, which allowed to determine the location of the German transmitter system Knickebein. As soon as the location map of the German radio navigation equipment was installed, a network of weak radiators appeared on the British coast, which interfered with the Knickebein operating range. The result was a partial and even complete disorientation of the German bomber aircraft. The literature even describes cases when the Germans mistakenly landed their planes on British airfields. Naturally, after a night bombing. 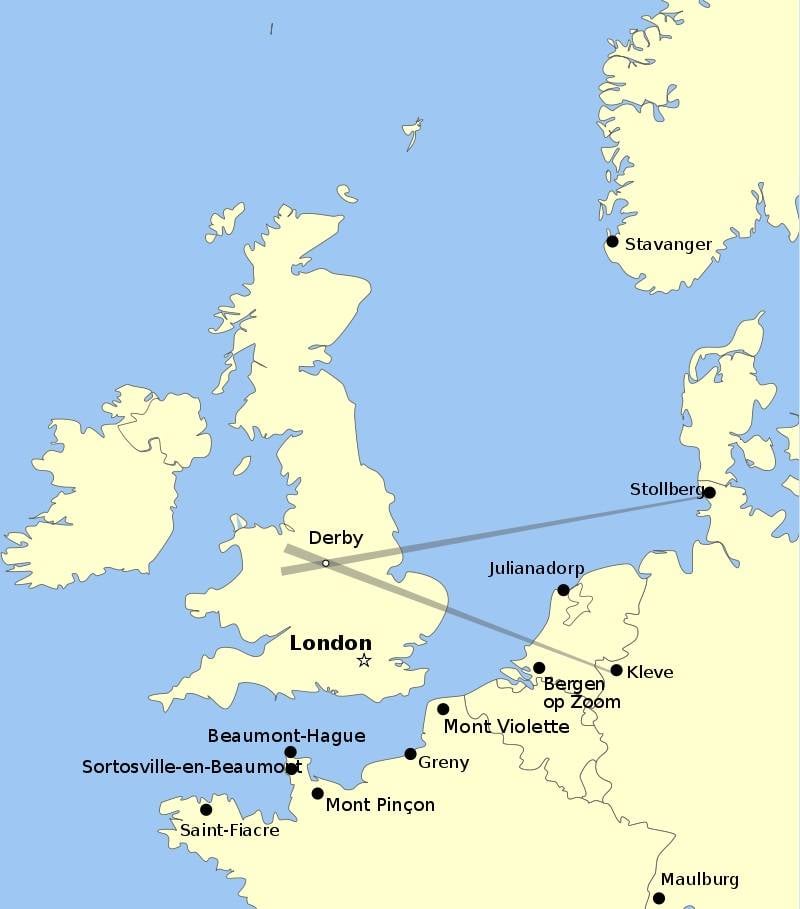 Map with the location of the Knickebein system transmitters. An example of a two-beam bomber aircraft targeting the British Derby

The Luftwaffe management was aware that Knickebein is imperfect and has low noise immunity. Back in the prewar period, a group of German engineer Josef Pendl developed the X-Gerate radio navigation system (Wotan I). The principle of operation of the novelty was based on a narrow-beam radio backlighting (60-70 MHz range) from special ground stations.

A diagram illustrating the technique of "blind" landing of an aircraft on an airfield. Developed by the Berlin office of C. Lorenz AG in the early 30-s. In a similar way, the British put German bombers on their airfields at night, getting lost

The first successful application was the work of radio navigation during the famous German air raid on Coventry in November 1940. The British at the beginning of X-Gerate panicked a little, because of the incorrect determination of the modulation frequency could not deliver effective interference. And only the Heinckel He 6 bomber shot down on 1940 in November 111 of the year allowed us to finally deal with the intricacies of German navigation. And on November 19, the British successfully placed X-Gerate interference during a raid of Luftwaffe bombers on Birmingham. The British even built a station of false narrow-beam radio backlighting, which were supposed to mislead the navigators of the German bombers. But the effectiveness of such measures was often low due to the fact that the inclusion of English doublers had to be synchronized with X-Gerate, and this was difficult.

Based on:
N. A. Kolesov, I. G. Nosenkov. Electronic warfare. From past experiments to the decisive front of the future. M .: Center for Analysis of Strategies and Technologies, 2015.