The flight of the UAV on liquid hydrogen

7 2012 June
13
The new unmanned aerial vehicle of the Boeing company, called the Phantom Eye, made the first flight, which ended, in general, successfully, despite the fact that there was a rather hard landing and the landing gear was broken. 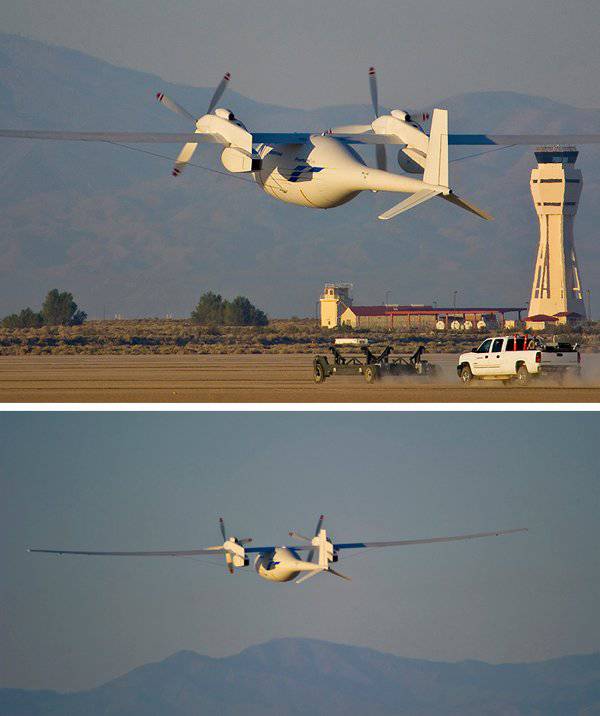 The drone started last Friday at 6:22 a.m. aviation NASA "Edwards", located in the state of California (USA). Despite the fact that the Phantom Eye flight could theoretically last for four days without refueling, this time the flight lasted only twenty eight minutes, and took place at altitudes that do not exceed 1200 meters, and at a limited speed of 115 km / h.

Unlike the American company Lockheed Martin, which succeeded in developing and building a large unmanned aerial vehicle with a fixed wing, but then rejected by the Air Force and the United States Army, representatives of Boeing believe that they will succeed. Indeed, the use of liquid hydrogen (it is twice as large as oil products by specific energy intensity) as a fuel enables the scout to be in the air for up to ninety-six hours, compared to thirty-six for Lockheed Martin's RQ-4 Global Hawk. At the same time, the dimensions of the structure are titanic, as evidenced by the wingspan of the Phantom Eye, which is 76,25 meters, as well as the payload in 203 kilograms. The ceiling of this giant reaches twenty kilometers, and cruising speed reaches 278 km / h.

An empty drone weighs 3390 kilograms, which is also a record for a device that has such dimensions. This was possible due to the fact that carbon fiber was used in the construction, as well as due to the absence of a heavy chassis. This drone does not have a conventional chassis, but there is a special launch system consisting of a four-wheel trolley that accelerates the aircraft to 55 km / h. Such a system eliminates the unmanned aerial vehicle from the need to carry extra load in the form of a powerful chassis. Landing is carried out on the side supports and lightweight front wheel.

However, it was this trigger system that caused one of the aircraft racks to dive into the bottom of the lake when landing, which served as the runway. When landing on concrete, of course, this would not have happened. However, now the possibility of landing and taking off from unpaved airfields, which was previously announced by the developers, is somewhat doubtful. Yes, and it is unlikely that what happened was the only hitch in the autonomous first flight, since it was supposed to last from 2's to 4's hours, and it ended in less than thirty minutes, although Boeing did not report the reasons for the “short program.” 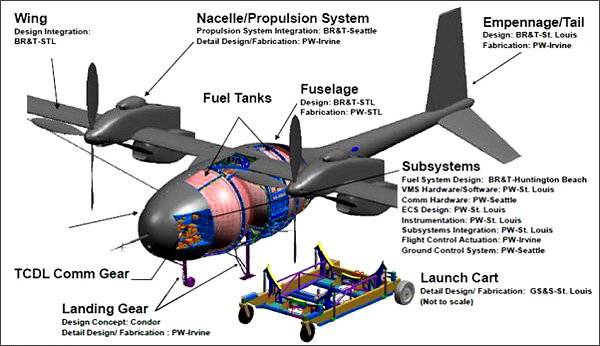 In fact, future prospects associated with the development of an aircraft-type reconnaissance drone are also overshadowed by competitors. The British airship LEMV, which one of these days will begin to pass tests, is capable of burying the project, since this aircraft can be in the air for twenty one days. Since neither LEMV, nor the Phantom Eye can be used against a well-armed country, the Phantom Eye's large ceiling most likely will not help it defeat the aeronautical competitor. In addition, diesel fuel used by airship engines is much cheaper than liquid hydrogen consumed by the Phantom Eye.

However, not only new aircraft are insured against breakdowns. Therefore, it is worth waiting for the completion of tests of a competing airship.