Ukraine is the battlefield of two civilizations

December 13 2018
31
The catastrophic state of Ukraine, which had excellent starting opportunities after the collapse of the Union and was torn apart by contradictions today, was affected by many factors. One of the determining factors was the striving of the West and the elites of Ukraine to change its civilizational identity. 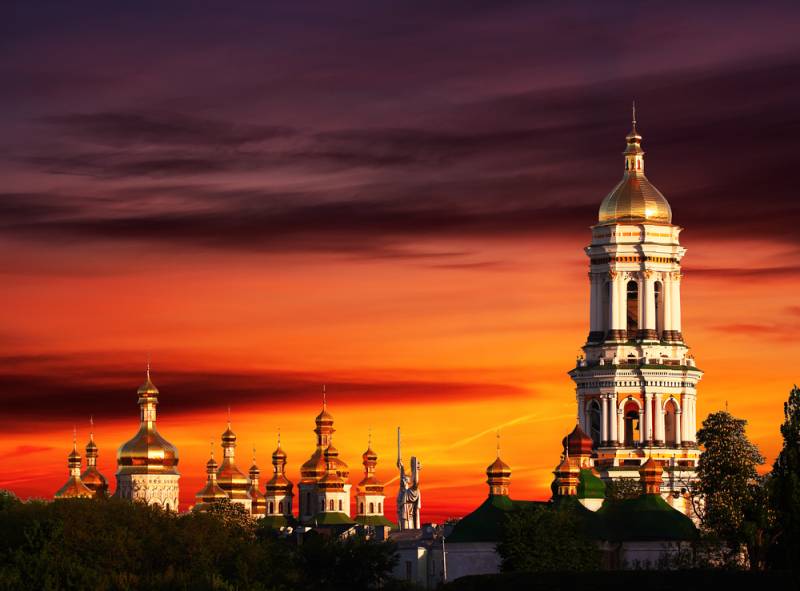 Ukraine is a limitrophe state located at the junction of two civilizations: Western (Catholic) and Russian (Orthodox). Its condition is aggravated by the fact that the border of civilizations does not pass along the borders of Ukraine, but through its territory.

This is due historical features of the formation of Ukraine: it united territories and peoples, part of which at certain historical stages was part of Russian civilization, and part of the western. Accordingly, in the west and east of Ukraine two groups of the population have formed with different worldviews and diametrically opposed civilizational aspirations.

The population of Ukraine has always been multi-ethnic and diverse in composition. An insignificant part of the population in western Ukraine, historical Galicia, was cut off from Ukraine for almost seven hundred years and was located within the framework of Western civilization. Galicia is the Ukrainian Vendée, mainly with a rural population with a primitive "farm" mentality, for which Bandera is the indisputable authority and symbol of the Galician nation. Mentally, it is on the side of the West, and Russian civilization is regarded as alien and hostile.

The overwhelming majority of the population of Ukraine was part of the Russian civilization and, of course, mentally together with Russia, it is concentrated mainly in the cities of the industrial Southeast. So the confrontation of pro-Russian and pro-Western views in Ukraine is a war between the city and the village, in which the villagers are trying to impose their “farm” mentality on an intellectual city. Thus, Ukraine is not only at the crossroads of civilizations, it is also torn apart from within, which provokes confrontation in society.

According to the theory of the conflict of civilizations of Huntington, civilizations never mix, they resist to complete destruction, absorption and assimilation of one another. Hence the answer to the question of why the West has always opposed Russia, regardless of the form of its statehood. Russia was an alternative to the West and offered a different path of social development, different from the west.

Historically, the confrontation of such powerful civilizations as the Roman, Byzantine, Muslim, Western, Russian, lasted for centuries, and each side sought to improve its position at the expense of the other. In the confrontation of Western and Russian civilizations with the collapse of the Union, an offensive against Russian civilization began on all fronts, including by reformatting its western suburbs and forming from them hostile states. This also affected Ukraine.

The aspirations of the West in Ukraine were facilitated by the historical and mental factors in the formation of the state and the population, the internal disunity of Ukrainian society and the willingness of elites to draw Ukraine into Western civilization.

The choice of the vector of development of Ukraine after independence was determined not by the population, but by the post-Soviet elite, and to justify the legitimacy of its power and create an independent state from Russia as the state ideology of Ukraine, it adopted the ideology of Galician nationalism, built on the denial of Russian roots, Russophobia and the desire to integrate into Western civilization.

Initially, Ukraine began to build a state "sharpened" against Russia. All Ukrainian elites to one degree or another pursued a policy that boiled down to one — as far as possible from Russia and closer to the West. The opinion and interests of the population of Ukraine did not interest them.

To solve this problem, it was necessary to assimilate the Russian population of Ukraine and deprive it of Russian identity, instill in it Galician nationalism and Russophobia. Throughout the years of independence, this program was gradually implemented according to the patterns developed in the West, the information space was changing, history was rewritten, textbooks in schools were changed, monuments were destroyed, cities and streets were renamed, the use of the Russian language was limited, the image of the enemy and occupier was molded from Russia.

Emphasis was placed on young people, it was zombied, formed adherents of Western civilization. The split in Ukrainian society was used to purposefully impose the mentality, Russophobia and heroes of Galicia on the whole population of Ukraine, the information space of Ukraine eventually became completely anti-Russian.

The West, in order to realize its goals in a civilizational confrontation with Russia, made serious organizational and financial efforts to form anti-Russian elites and pro-Western sentiments in Ukraine in Ukrainian society, in the end he put the Ukrainian elites under full control.

Attempts by a part of the Ukrainian elites to pursue a multi-vector policy with respect to two civilizations were doomed, since Ukraine, being between the two poles of power, inevitably had to be absorbed by one of them. It all depended on which pole would be stronger.

All this together contributed to the creation of an anti-Russian bridgehead from Ukraine, which became the outpost of the West in a civilizational confrontation with Russia. These actions were aimed at reformatting government structures according to Western patterns, changing the population’s self-awareness and forming anti-Russia from Ukraine. The interests of the Ukrainian state and the more so of society were not interested in any of the parties. Ukraine lost its subjectivity and became a puppet in the hands of the West with a pathetic role of scarecrow for Russia.

Attempts by Ukrainian elites to detach Ukraine from Russian civilization and integrate it into Western, as well as protectionist measures of the West, aimed at turning Ukraine into a raw materials appendage and the market for their products contributed to the breakdown of relations with Russia, deprivation of Russian markets and cheap energy resources. All this led to the destruction of industry, the destruction of infrastructure and a catastrophic fall in the living standards of the population. The elites, under the leadership of the western "partners," destroyed the once powerful economy and industry with their own hands and brought the Ukrainian state and society to an extreme degree of degradation and civil war.

Ukraine practically left the Russian civilization, but was not accepted on an equal footing to the west; it remained with her in the waiting room as a beggar with an outstretched hand. She remained in a state of limitrophe between two civilizations, and they will decide its future fate.

The drift of Ukraine towards the West is not over yet. As a result of popular protests and half measures of the Russian leadership in 2014, the Donbass got out of Kiev’s control, the process of rapprochement with the West and confrontation with Russia of the rest of Ukraine intensified. The unleashed civil war in the Donbas restrains Ukraine from full integration into the structures of the West, moreover, as an equal member, it is not expected there.

In the confrontation of civilizations, the battle for Ukraine has not yet been lost, only the battle was lost, all the battles ahead. The population of Ukraine is resisting forced assimilation, and the potential for returning to the Russian civilizational field has not yet been lost, but it is decapitated, there is no elite in Ukraine yet who are ready to defend the interests of the population and fight for Russian unity. From how quickly they will be formed and how effectively they will act, will depend on the civilizational identity of Ukraine.