December 11 2018
20
On Friday, December 7, at the Congress of the Christian Democratic Union (CDU) of Germany in Hamburg, Annegret Kramp-Karrenbauer was elected the new party chairman. In the second ballot, she beat the candidate from the CDU wing, Friedrich Merz, on 35 votes (517 vs. 482). 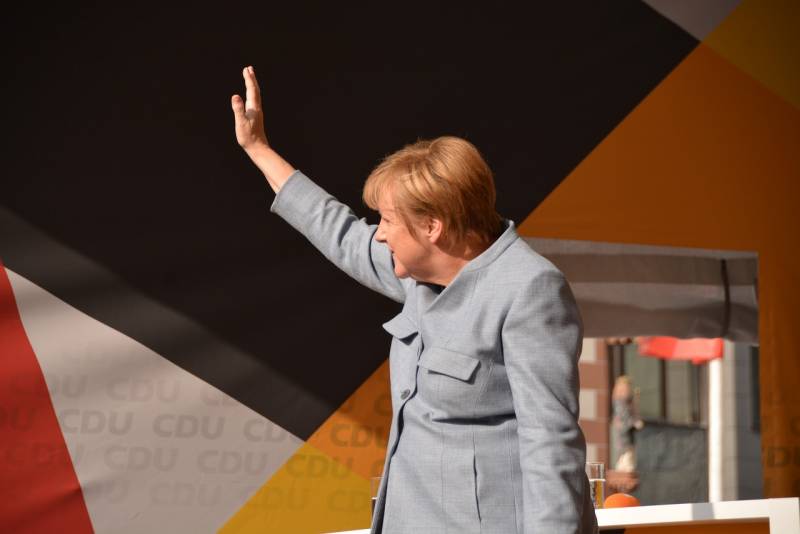 As soon as the results of the election of the chairman of the CDU were announced, the experts unanimously spoke that Angela Merkel had succeeded in Operation “Successor”. The possible castling of these two ladies as leader of the influential CDU in Germany was predicted immediately after Merkel’s sensational statement that she would not run for the head of the CDU at the December congress, but would remain Chancellor until the next parliamentary election of 2021.

Angela Merkel made that statement immediately after the failures for the Christian Democrats of the elections to the Hessen land parliament. The CDU received there only 27,2% votes against 38,3% five years earlier. The failure in Hesse was somehow immediately tied up with the person of the party leader, losing support in society and the party environment due to dissatisfaction with the work of the ruling coalition.

Under Merkel, the chancellor’s chair reeled, but she chose to sacrifice the post of head of the ruling party. This move was so weak in its consequences that only a reliable ally at the head of the CDU could provide at least some positive result with the support of the Chancellor.

In this regard, in the media immediately flashed the name of the Secretary-General of the CDU, Annegret Kramp-Carrenbauer, which, for ease of reference, was simply referred to as ACC. In the big politics, Kramp-Karrenbauer is a new man. She moved to Berlin only this spring, when she occupied the second most important position in the CDU.

Prior to that, ACC had been quite successfully moving up the career ladder in the Saar native land (the smallest in Germany). She has consistently held the posts of the Minister of the Interior, Family, Women's Rights and Sport in the state government. Since 2011, Saar has become Prime Minister.

With Angela Merkel, Annegret Kramp-Karrenbauer established a trusting relationship. ACC supported the Chancellor during the difficult moments of her career. For example, in the autumn of 2015, when, due to the mercy of Merkel, a migration crisis broke out in Germany, and this caused a serious rift among the Christian Democrats, the ACC was on the side of the chancellor.

A similar situation arose at the beginning of this year. Then, after the failed autumn elections to the Bundestag, Merkel tried to retain the post of chancellor, collecting at least some majority coalition with the participation of the CDU. The coalition agreement and candidates for ministerial posts in the government approved the congress of Christian Democrats.

It also reviewed and personnel changes within the party. At the suggestion of Angela Merkel, the Prime Minister of the Government of the Land of Saar Annegret Kramp-Karrenbauer was elected Secretary General of the CDU. She was at once "recorded" as successor to the Chancellor, remembering that Merkel herself had risen to the highest positions in the German bureaucratic hierarchy and the ruling party of the CDU general secretaries. Now the operation "Successor" got its logical continuation. Kramp-Karrenbauer replaced Merkel in the chair of the party already.

American shadow over the political horizon of Germany

It was not easy. Recently, Merkel had a serious opposition not only in society, but also in the party. Friedrich Mertz became its banner. About him it is necessary to say special. This man is a professional lawyer, but made a political career. He was a deputy of the European Parliament. Then he was elected to the Bundestag, where he soon enough took leading positions in the CDU / CSU faction, which he eventually led.

In the 2009 year, Friedrich Mertz left politics - some experts say. There is another point of view. Mertz did not leave politics, but, on the contrary, rose to its higher level, which was hardly noticeable to the simple eye. Having worked as a lawyer for large corporations, Friedrich Mertz grew to the chairman of the German supervisory board of the American investment giant BlackRock (according to the assessment of former Federal Reserve Chairman Paul Walker, the most powerful financial corporation in the world).

As Dmitry Sedov, an expert of the Foundation for Strategic Culture, noted, BlackRock brought Merz not only financial well-being and a multi-million dollar state, but also such important posts as the chairman of the Atlantic Bridge and a member of the Trilateral Commission. The International Commission on Peace and Prosperity (now called the Trilateral because of the participation of representatives from North America, Western Europe and Asia) 45 years ago was created at the suggestion of the famous American banker David Rockefeller.

Rockefeller and headed it, formulating the official task of the new organization - the discussion and the search for solutions to world problems. Since then, the composition of the commission, which has an obvious political bias, has changed several times. Only selection of its participants remains unchanged. This is about 400 of the largest bankers, leaders of transnational corporations, prominent politicians. In such a solid company, there was a place for Frederick Merz.

Unlike the Trilateral Commission, which has a wide international format, the Atlantic Bridge is a purely American idea. It was created after the Second World War in the interests of the US occupation authorities in West Germany. The “Most” stated the most good goals: “educational, scientific, cultural and charitable, as well as the development of mutual understanding between nations.”

Knowledgeable people claim that the “Atlantic Bridge” is actually engaged in “creating a network of leading cadres that influence the formation of public opinion in the spirit of supporting the actions of NATO and the United States.” As an example, they cite annual reports on the employees of Most, where there is information about almost a hundred of the largest German journalists “associated” with this American organization. Friedrich Mertz, already familiar to us, presides in it.

When Mertz advanced to the post of CDU leader, former speaker of the parliamentary CDU faction on military-political issues, Willy Wimmer noted: “The candidature of Friedrich Mertz for the post of party chairman was prepared with a“ long hand ”and now swam to the final stage.

The validity of this conclusion during the pre-election meetings was indirectly confirmed by Merz himself. Formally representing the German business community, he essentially promoted the American political agenda. First of all, this was reflected in his active support of anti-Russian economic sanctions and the requirement to abandon the Nord Stream-2 gas project.

However, at this stage of the struggle for a place on the political Olympus of Germany, Friedrich Mertz lost. Analysts were quick to conclude that Angela Merkel will now (with the support of party functionaries Annegret Kramp-Carrenbauer) complete the job as chancellor to 2021.

But there is one nuance. Kramp-Karrenbauer has already managed to be noted for its political plasticity. On the proposal of the ACC, the like-minded Merz of 33-year-old Paul Tsimiak, who previously headed the youth organization of Christian Democrats, was elected at the congress as Secretary General of the CDU.

German media positively evaluated this move by the new CDU leader. Observers agreed that Kramp-Karrenbauer wants to be not only the "confidant of Chancellor Merkel", but also strengthen the unity of the party, which split at the congress almost in half.

Only now no one answers the question: will provincial Annegret Kramp-Carrenbauer withstand the pressure of politically experienced party members focused on the Atlantic agenda and support from overseas? For ACC, this will be a more serious task than the elections that have ended.