On the upcoming triumph of "democracy" in Damascus 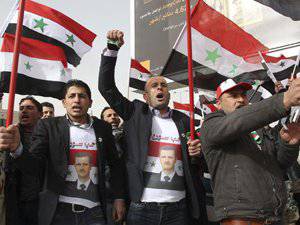 5 June, Syrian TV channels reported that Syria expelled ambassadors from the country of the United States, Britain, France, Switzerland, Spain, Italy, as well as attorneys in affairs of Belgium, Bulgaria and Canada. In late May, a number of countries included in the so-called “Group Friends of Syria, ”announced the decision to expel the ambassadors of Syria, and in some cases other Syrian diplomats in connection with reports of the alleged involvement of Damascus in the tragedy in the village of Hula, where more than 100 civilians died. As you can see, the noose around Bashar Assad’s neck is compressed, he has practically nothing to breathe.

The concept of "controlled chaos" from the Maghreb to Indonesia, elevated to the rank of the global foreign policy doctrine of the United States, is successfully implemented in life, without encountering any resistance on its way. By the way, among those who resist it is necessary to name Russia and China, who sometimes veto NATO resolutions in the UN Security Council. However, the veto of these two great powers practically have no meaning: if the invasion of the territory of a sovereign state is recognized as the highest priority (with the motivation of protecting supposedly civilians from their own barbaric government), then it can be implemented under the auspices of NATO, and providing political will to the sacrificial countries air defense systems - over the past 20 years, neither China nor Russia has had enough.

So Yugoslavia was betrayed (in 1999 it was said that several C-300 installations were enough to prevent NATO bombardment: it is indisputable that the Western allies would not allow themselves to lose planes worth $ 100 million every second). With the tacit consent (or inaction) of China and Russia, NATO managed to introduce perpetual chaos in Libya, before that - in Iraq. Today is Syria.

Will the Assad regime withstand the Western threat? No doubt not. The question of its displacement and the introduction of chaos in peaceful Syria is a matter of time. Bashar Asad fights with rebels armed with Western money and weapons, alone: ​​neither Russia nor China does not give him any meaningful support. And significant support in this situation means three things: air defense weapons, assistance in organizing the country's defense against western invasion, and neutralizing Western aid to the rebels. For this, Russia and China have all the possibilities, and the matter remains for the small one - by political will.

There are no prerequisites for the hope that Russia and China will save Alawi Syria and prevent another hotbed of tension and chaos in the Middle East, at the moment there is no. The two great powers confine themselves exclusively to diplomatic methods, however, as practice shows, diplomacy will not go far, and Russia's geopolitical interests have been repeatedly infringed by adhering to the norms of international law.

White House spokesman Jay Carney said at a briefing yesterday that the US hopes for Russia's help in dislodging Bashar Assad, explaining that only Assad’s resignation will help prevent bloodshed in Syria and the region.

Waiting for the outcome of the Syrian drama is not long. Of course, it would be sad for us to observe the tragic picture of the public mob on Bashar Assad (by analogy with Gaddafi or worse), however, we will be comforted by the fact that Hillary Clinton will bring unprecedented pleasure to this spectacle. Still, it is more important than all the others, since it is her interpretation of reality and feelings that will be recognized as "democratic", "liberal", "humane" and "fair."