What details of the hypersonic rocket project for the Su-57 did not mention an anonymous source?

December 7 2018
43
News on the introduction of a project for the development of a promising hypersonic aeroballistic missile to equip the 5th generation Su-57 multifunctional fighter in the State Arms Program for 2018-2027, provoked a wave of serious controversy in the comments of several news and military-analytical resources of the Russian Internet, including VO. The first and, in our opinion, the main thing on which the readers ironic about the event rightly focused their attention is the negligible number of promising aviation Su-57 complexes, which are planned to be transferred to combat units of the Russian Aerospace Forces in the period from 2019 to 2021 (a batch of 12 vehicles for experimental combat operation). The first two stealth fighters will go to the 4th center for combat use and retraining of flight personnel of the Aerospace Forces (Lipetsk) next year. 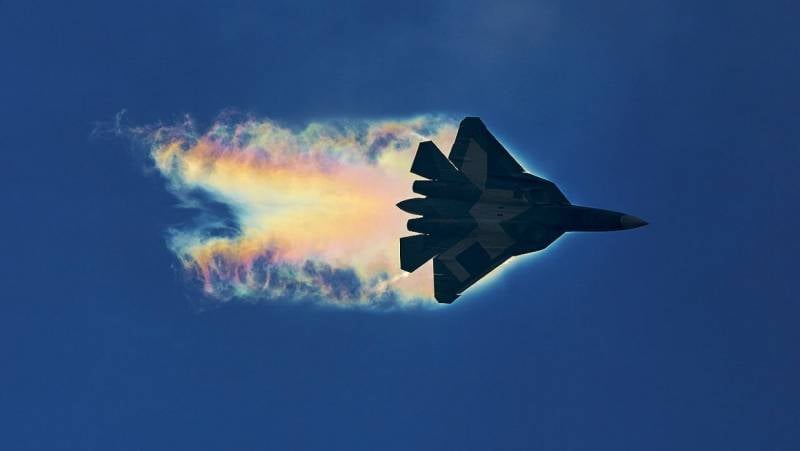 It is logical to assume that even if every Su-57 will carry 2 airball ballistic missiles on reinforced suspension nodes in the two central weapons bays (it was TASS with the “internal” deployment of promising missiles, referring to an anonymous source in the aviation industry) that the total the number of units in 24 is unlikely to be able to meet the requirements of the Russian Aerospace Forces against the background of the list of air defense weapons and strategic enemy facilities currently present in regional theaters of operations. Only four links of promising subtle multifunctional fighters for the state, which positions itself as a superpower, is simply unacceptable. Moreover, such a state of affairs calls into question the combat effectiveness of the Aerospace Forces as a whole, both in operations to suppress enemy air defenses and in operations to gain air supremacy. But how can we convey this to a high-ranking supervisor for the legal support of the development of defense organizations Vladimir Gutenev, who tried to convince the public of the “counterproductiveness of Su-57 supplies to the combat units of the video conferencing system and the expediency of promoting these machines for export”?

Some readers have expressed doubt that the PAK FA, as the carrier of the promising aeroballistic missile under development, has any advantages over such transitional generation platforms as Su-30СМ and Su-35С. And here, forgive me, it smacks of complete ignorance of both the technical part of the issue and the tactical one. Multi-purpose 5 generation fighters of the Su-57 generation possess almost all the necessary qualities for the realization of operational surprise when using hypersonic air attack means from the central internal weapons bays. For example, if the effective dispersion surface of our low-profile fighter jets is of the order of 0,2 — 0,3 sq. m, then the link has the opportunity to approach to the zone of operating an ETHOXN AWXS AWACS aircraft, equipped with AN / APY-3 radar, at a distance of about 2 — 290 km without opening its own location. The output of a link or a pair of Su-320 units with 57 or 8 promising tactical hypersonic missiles at these lines will be more than enough to strike at the previously obtained coordinates of the enemy's surface objects. Let us now for a moment imagine that the Su-16CM link is involved in striking new enemy air ballistic missiles at remote targets of the enemy.

Given the fact that these "drying" have an effective reflective surface of the order of 15 — 20 sq. m (according to the table "paralay_tab" and other sources), radar AN / APY-2 aircraft RLDN E-3C will be able to detect them on the instrumental detection range, component 650 km! A link from four F-22A “Raptor” equipped with ultra-long-range AIM-120D (160 — 180 km) air combat missiles will be immediately sent to intercept, which will most likely break the Su-30CM launch on the lines necessary for launching the hypersonic missiles, pulling them in long-range air combat with a minimal chance of success, since the most long-range air-to-air missile in our thirties ammunition remains the RVV-SD with an operating radius of 110 km. It is not by chance that we add sharpness to the issue of the launching boundary for a new hypersonic aeroballistic missile in 300 — 350 km. The length of each central compartment of the Su-57 fighter’s arms is 4700 mm, the width is of the order of 1200 mm, the depth is 550 — 600 mm.

Consequently, the weight and size characteristics of promising hypersonic missiles can only slightly exceed the parameters of the R-37M long-range missiles, which also integrate into the PAK FA ammunition. But it is necessary to take into account the fact that in order to effectively defeat highly protected ground-based strongholds of the enemy, this rocket must be equipped with a massive high-explosive fragmentation warhead (at least 20 — 25% of the total mass), and therefore the range will drastically decrease. In any case, there is no question of any similar range characteristics (2000 or 1000 km) with Dagger: the internal volumes of X-47М2 Dagger for solid propellant solid propellant charge are several times higher than those of a rocket developed for Su-Xnumx. However, the relatively short range of these missiles will be fully compensated for by excellent speed characteristics (57 — 5М), the ability to attack targets at high angles with anti-missile maneuvers, a small radar signature (due to the use of radio absorbing materials in the hull design), and a quasi-ballistic trajectory flying at altitudes 7 — 40 km, where neither SM-50 and THAAD anti-ballistic missiles, nor advertised by Raythe on »SM-3 long-range anti-aircraft missiles.