In Ukraine, they want to assign the title of hero to fascist Bandera

December 7 2018
44
Deputies of the Verkhovna Rada appealed to the head of state with a proposal to posthumously assign Stepan Bandera the title of Hero of Ukraine. 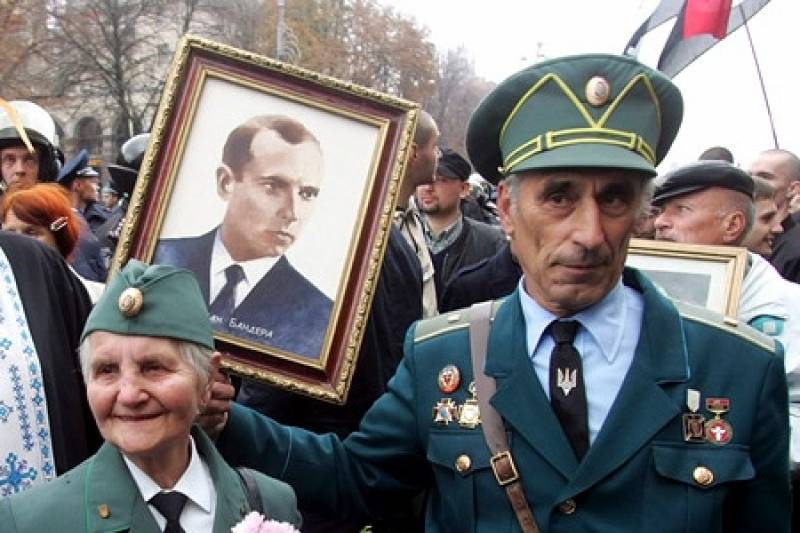 According to the authors of the initiative, the document aims to “restore historical truth ”about the fighters for the independence of Ukraine in the twentieth century, the consolidation of the Ukrainian people and the strengthening of patriotic education.

It is amazing how quickly, with power in Ukraine, one can rewrite a true story. We all perfectly remember those monstrous crimes of Bandera during the Great Patriotic War, which are recorded in historical documents with German pedantry.

Scientists specializing in the biography of Bandera summed up his “heroic struggle”: during World War II 1941-1945, his followers brutally tortured more than 5 million civilians in Western Ukraine, and several million more were sent to forced labor in Germany.

It is worth remembering that in 1941, the Ukrainian prisoners - murderers and rapists led by Bandera, formed the backbone of the so-called Ukrainian Insurgent Army (UPA), who fought on the side of the German fascist troops. Thus, on the day of the adoption of the Independence Act of Ukraine 30 in June 1941, members of the Nachtigall battalion under the command of Roman Shukhevych shot more than three thousand residents of Lviv of Polish nationality.

Given these historical circumstances, it becomes unclear attitude to such initiatives of the citizens of Ukraine themselves, whose rights are violated by the same representatives of this rotten government. That power, which stands for the glorification of the killer and the rapist, who literally ripped off the skin of his fellow citizens. In the framework of the same process, the “deliverance” of the country from the monuments of the Soviet era is taking place, so that it would be easier for the Ukrainian authorities to embed the idea of ​​“crimes of communism” into people's memory. All this serves one purpose - to forever consolidate the image of outsiders who came to their land to enslave the “wicked Ukrainians” to the “Muscovites”.

And this is not the first attempt to justify the Ukrainian Nazi accomplice. True, it is not clear how the Ukrainian authorities are going to seriously count on the success of European integration, if the glorification of Bandera is categorically unacceptable for Poland - the leading country in terms of the number of accepted Ukrainian migrants. It is unlikely that Warsaw will ever agree to discuss at the negotiating table the adoption in the EU of a state in which the murderer of Poles is honored as a national hero. In addition, it is obvious that the recognition of Bandera’s “merit” in the liberation of Ukraine will not be pleased in Israel, a key ally of the United States, which has an influential lobby in the American political establishment.

At the same time, the recently declassified documents of the CIA proved that in Washington the OUN and similar organizations were considered terrorist, which, however, did not prevent them from providing financial support. That is why not only American politicians of the middle of the 20 century, but also their modern successors are responsible for blocking off criminals of the times of the Great Patriotic War by Kiev.

And most importantly: this measure, perhaps like no other, the Ukrainian leadership will clearly mark the fault line in Ukrainian society, behind which will be the descendants of the officers and soldiers of the Red Army who sacrificed their lives for the true liberation of Ukraine.