December 23 2018
18
The fighters of the special units of the Office of Strategic Services of the United States (Office of Strategic Services - OSS) had to perform special tasks in the rear of the enemy, for which they needed a variety of weapons. In particular, in the arsenals of the Office there were various blades, batons and garrots. At some point, the OSS designers decided to combine the functions of several types available. weapons in one product. Due to this, soon a multi-functional melee weapon called McLaglen Peskett Close Combat Weapon was put into service.


According to available data, during World War II, the OSS special forces consisted of half a dozen different combat knives and daggers. All these products differed in shape and size of the blade, as well as combat capabilities. Also, there were several varieties of batons, including folding, and udavok-garrot. This meant that for a close combat or for silently neutralizing the watch fighter could use any available means. On the other hand, a wide selection of products for various purposes forced the soldiers to carry several samples with them at once and weighed down their equipment.

One of the few surviving CCW products. Blade put into position

Approximately, in the 1943-44 years, the advanced weapons development department from the OSS proposed to create a completely new model of melee weapons that would combine several separate samples at once and, accordingly, could solve several problems of various kinds. Soon the proposal was implemented, and in the Office of the received serial products.

According to known data, the designers of McLaglen and Peskett were engaged in the development of the new model. The full name of the weapon reflected the names of both engineers. Without focusing on individual functions, their development was designated as a “melee weapon”. Thus, a product called McLaglen Peskett Close Combat Weapon was offered for adoption. Also in some sources, including the official OSS publications, the name is given without mentioning Mr. McLaglen.

The aim of the CCW project was to abandon the individual combat knife, garrote and batons in favor of a universal device that has all the necessary functions. This design problem was solved in a very original way. The finished "melee weapon" had only a limited outward resemblance to some other models in service. At the same time it exceeded them in some performance characteristics.

The main and largest part of the CCW McLaglen-Peskett was a cylindrical body. It was made in the form of a tube length of 5,625 inch (143 mm) with a maximum diameter of 7 / 8 inch (22 mm). The tube had a variable diameter. Near its upper part, it slightly decreased, providing convenience of retention. Most of the outer surface of the case had annular grooves, which also improved the fit of the weapon in the hand. Near the upper end of the case there were holes for the installation of some additional devices. Bottom side placed a large button to control the blade. Opposite it was provided for mounting ring with a strap.

At the top end of the main body, the designers placed a cast metal ball with a diameter of 1 3 / 8 inch (35 mm). At the bottom of the ball was provided a cylindrical protrusion that went into the body and was fixed with a screw. On some CCW products, the ball had an annular protrusion at the "equator". At the same time, samples with a completely smooth ball are known. At the expense of a massive ball at one of the ends, the Maklaglen-Peskett weapon turned into a compact mace. The ball served as a shock-topping part and increased the impact force.

In the upper part of the tubular body there was a hole through which thin wire about 2 feet in length (of the order of 600 mm) was pulled out. One end of the wire was fixed inside the body, and the other was equipped with a ring or spherical tip. According to some reports, the McLaglen Peskett Close Combat Weapon product had the means to wind and store the wire in the transport position, but their device is unknown. Perhaps the wire was stored on a coil, the axis of which was connected to the ball. Rotating the latter, it was possible to wind the wire to carry the weapon further.

The purpose of the wire was simple and straightforward. She served as garrot. With its help, OSS commandos were invited to silently attack enemy sentries and strangle them. In this case, the body and the ring performed the functions of the handles, providing an acceptable convenience.

Inside the case was placed a thin blade, which gave the CCW product some possibilities of a combat knife. The blade's shank, which occupied most of its length, had a circular cross-section. In its back there were grooves for interacting with the lock. The blade itself was made flat and narrow. He had a double-sided sharpening with a pointed warhead. Depending on the direction and method of the strike, such a blade could be used as a piercing or cutting weapon. The length of the protruding part of the blade - 5,25 inch (133 mm). 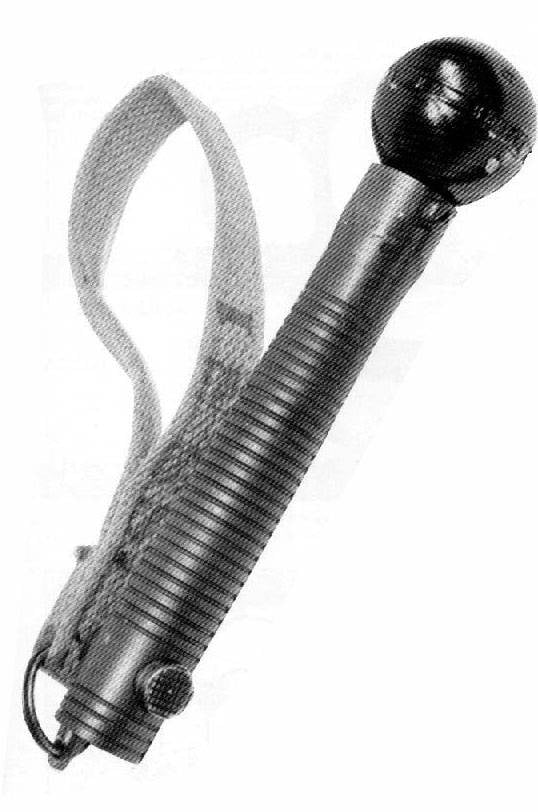 CCW in transport position - or in mace configuration

The long part that combined the blade and the shank moved freely inside the tubular body. In the transport position, the blade was in the tube. A spring-loaded button with a stopper prevented him from falling through its lower end. When pressing this button, the blade under its own weight fell down and stopped in the working position due to the stopper and the button.

For ease of carrying and use in solving all major problems, the McLaglen Peskett Close Combat Weapon received a belt loop. In the lower part of the case there was a protruding pin, on which a metal ring was fixed. It was installed fabric strap, which could be put on the hand. It is curious that the carrying strap was no less than the weapon itself. A special case was also created for transporting weapons on a belt or other regular equipment of a fighter.

The total length of the "melee weapons" from McLaughlan and Peskett was only 7 inches (178 mm). The maximum transverse dimension was determined by the top in the form of a ball with a diameter of 35 mm. The use of the shock of other sizes and shapes could affect the overall dimensions of the weapon. With the blade extended to the working position, the total length of the product was increased to 12,25 inches (311 mm). The mass of such weapons did not exceed 500-600 g. Together with their small size, this provided an advantageous combination of ease of carrying and efficient use.

Designers Maklaglen and Peskett created a device that could solve three problems at once, characteristic of sabotage operations in the rear of the enemy. At the same time, the multifunctional weapon favorably differed from three separate samples, both in terms of dimensions and in terms of ease of use. However, in some situations the universal system could noticeably lose to the specialized weapon.

The product McLaglen Peskett Close Combat Weapon, above all, was designed to silently neutralize the enemy's watch or solve similar problems. Naturally, the use of such weapons in hand-to-hand combat with the enemy was not ruled out, but in such situations other products, including firearms, could be more useful.

A CCW fighter from McLaughlan-Peskett could use his weapon as a baton. For such a use of its training is not required. It was necessary only to properly perform the swing and hit the enemy. The wire that was pulled out allowed strangling the sentry, although this might require preparation. Due to its shape, the retractable blade could show itself in the best way with stabbing blows, which was also useful for covertly neutralizing enemy fighters.

The need to combine different functions affected the design of individual elements of the new weapon, which hit its real capabilities. In some cases, CCW was less effective than the samples for which it was created to replace. Thus, a thin and long blade with specific attachments could not show the desired effectiveness of cutting blows. In addition, there was a risk of backlash, because of which he could begin to swing in his place, interfering with the proper striking.

Small length and weight could not provide high efficiency CCW as a mace. A relatively short weapon did not protrude sufficiently beyond the bounds of the middle fighter's hand. As a result, in practice it was not a mace or club, but a kind of simple lead clamped in a hand. For more effective use of weapons in such a role, certain skills were required. 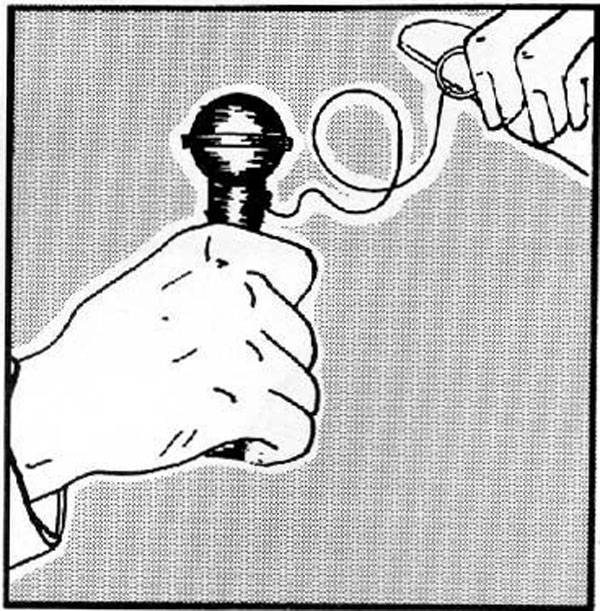 Preparation for use as garrote

There could also be complaints about the built-in garrote. When using it, the fighter had to stretch the wire with the help of a body-handle and a ring or a spherical tip. For comparison, the standard OSS garrot was equipped with a pair of wooden or metal handles of 2,5 inch length (63,5 mm), providing greater convenience of use. In addition, it should be borne in mind that garrote is not the easiest to learn and use weapons, although this factor was not significant for OSS due to the special training of fighters.

The original universal "melee weapon" designed by McLaglen and Peskett could solve several problems at once, showing quite acceptable results, although it was not without certain flaws. The management of the Office of Strategic Services evaluated this model and recommended it for adoption and use. No later than 1944, OSS signed a contract for the serial production of such weapons. What kind of commercial organization engaged in production - is unknown.

There is no detailed information about mass production of McLaglen Peskett Close Combat Weapon products for OSS. How long their release lasted, and how many copies were transferred to the special service - is unknown. In addition, as is the case with a number of other special systems for a secret organization, there is no information about the combat use of CCW in real operations. There is every reason to believe that the OSS fighters repeatedly used such weapons to covertly penetrate enemy targets or to solve other tasks, but unfortunately there are no confirmations of this.

The CCW product was created during the Second World War, taking into account current needs and requirements. After the end of the war, the Office of Strategic Services, later reformed into the Central Intelligence Agency, abandoned a number of special systems in favor of more advanced and successful designs. It is possible that, together with other samples, the development of Maklaglen-Peskett fell under the write-off.

Information about the post-war use of such weapons is missing. In addition, only a few surviving samples are known, and most of the information about the project is available only in old written sources. All this may indicate that shortly after World War II, the “melee weapon” was removed from service, probably due to extremely low efficiency.

For solving various combat missions, both specialized samples and universal multifunctional systems can be used. The OSS McLaglen Peskett Close Combat Weapon project provided for combining the functions of three separate types of weapons in one sample. In general, the desired goals were achieved, although the resulting system could lose specialized counterparts. Nevertheless, a curious solution for the original problem is of interest, at least from the point of view stories and technology.