Washington Post: If you did not know this - the USSR defeated Nazi Germany

December 6 2018
102
The American newspaper writes about the anniversary of the beginning of the Soviet offensive 1941 of the year in the Battle of Moscow [material from December 5] - the battle that ended with the first major defeat of Nazi Germany. The Washington Post adds that this battle may have been the most important (turning point) of World War II in Europe.


"This is a day to remember the enormous losses that the Russian and other peoples under Soviet rule suffered in the war, and to recognize their central role in the victory of the Allies".

This opinion was expressed by Matthew Leno in his article posted by the above-mentioned American edition. Her translation is presented below. Some passages in WP are at least surprising. 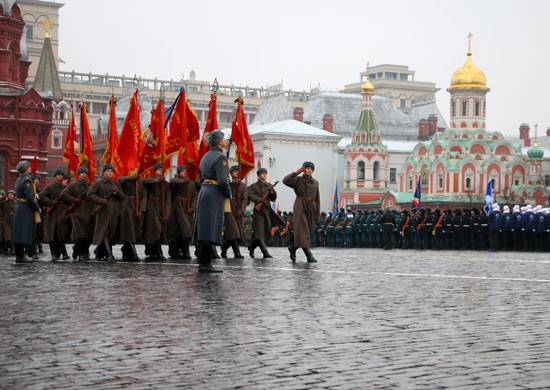 In the two years preceding the battle of Moscow, German troops won rapid victories in Poland, Norway, France and the Balkans, giving Adolf Hitler power over Europe. Joseph Stalin, fearing Germany and hoping to avoid war, signed a non-aggression pact with the Nazi leader in 1939 and helped him crush Poland. But Hitler's ultimate goal was the USSR, which he considered to be the center of the “Jewish-Bolshevik conspiracy,” who intended to rule the world. 22 June 1941, Germany attacked the Soviet Union.

In the first five months of the invasion, German troops constantly inflicted disastrous defeats on the Red Army. Soviet military power was listed only on paper, most of its equipment was outdated, training was often conducted very poorly, there were not enough critical means — radio, optics, and even maps of their own territory. By early December, total losses in the USSR were approaching 3 to millions, American and British intelligence feared that the Soviet Union might collapse in a few weeks.

That was the moment when Soviet General George Zhukov decided to strike back. In one month of the desperate battle near Moscow, the Germans were thrown 100 miles from the capital. She demonstrated the absolute limits of human endurance. Soldiers on both sides often survived, feeding on the flesh of dead horses and frozen potatoes found in the fields. One of the Red Army men, arrested by the "secret police," as a "defeatist," wrote:

We fight for villages and forests ... [our officers] lead us like cattle ... winter struck us, cold, hunger and typhoid.

16 December A German soldier who escaped from Soviet captivity told his intelligence officer that a drunken Red Army group lost in the snowy expanses and left without a commander killed the prisoners of war and ate their liver and lungs.

But the battle for Moscow also reminds us of the truth that many Americans do not know: it was the Soviet Union that made the biggest contribution to the defeat of Nazi Germany. The USSR suffered the greatest losses than any other ally: 11 millions of military dead and 16 millions more civilians. Between the years of 1941 and 1945, it was the Soviets that fought with most of the German armed forces and caused them maximum losses. The defeat of Nazi Germany - the merit of the USSR

The high price of war has changed Soviet strategic thinking and continues to influence Russian international politics. The USSR dominated Eastern Europe for 40 years, partly in order to have a buffer zone covering up from a possible attack from the West. The current Russian concerns about a possible expansion of NATO at the expense of Ukraine have similar roots, although Putin’s aggression in the region is clearly unfounded.

For Americans, it is important to recognize and take into account these realities. Russians are keenly aware that the scale of their victims is not understood in the United States. Indeed, Vladimir Putin’s regime gained popularity in part because of the resentment of the Russians that their country was not respected in the world, and their история remains misunderstood. Therefore, in order to improve Russian-American relations, it is necessary to pay tribute to the overwhelming contribution of Soviet citizens to victory in World War II, which will help to calm this feeling of bitterness.