Konstantin Danzas. The tragedy of the Caucasian officer and second Pushkin. Part of 1

December 4 2018
10
The figure of the personnel officer Konstantin Danzas, in the modest opinion of the author, is tainted and partly cast into oblivion absolutely unfairly. Virtually his entire adult life, Constantine served the state faithfully and faithfully. Alexander Sergeevich Pushkin called him brother. Their friendship was not denied even by some opponents of Danzas. But the tragedy on the Black River first broke the heart of Constantine, who was with Pushkin to the last, later almost erased all his previous life (by that time he was already a military officer with an enviable list of imperial awards) and finally drove Danzas into poverty and loneliness.


About the past of Danzas, despite the proximity with Pushkin, relatively little is known. Even the date of his birth is controversial. According to some data, Konstantin Kirillovich was born on 1798, others indicate the date of 1800, and still others consider 1801 the year of birth of Danzas. One way or another, but Constantine, both on the maternal and paternal lines, came from noble noble families. 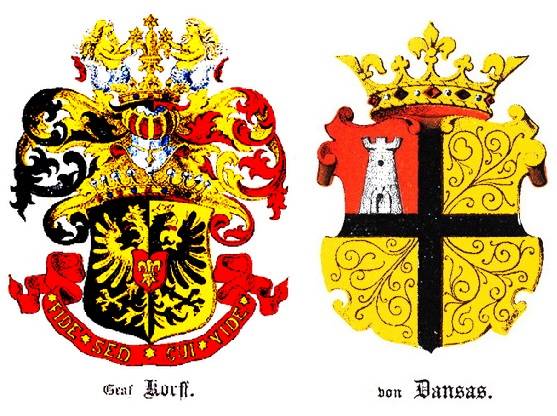 Coats of arms of the Korf and Danzas families

Mother Danzas was Baroness Korf. This noble German family had the Livonia and Courland branches, whose representatives went to the service of the Russian Empire. Constantine's father, Karl Danzas, came from an Alsatian noble family, part of which left France during the Great French Revolution and, like Corfe, entered the service of Russia. By 1800 year, Karl Danzas had already become a major general, so the future of the descendants looked quite encouraging.

Primary education in literature, calligraphy, foreign languages ​​and other young Konstantin received while being in a boarding school in Moscow. After he was accepted to the Tsarskoye Selo Lyceum. However, despite the fact that Danzas himself passed the exams for "excellent", it was not without patronage. Danzas' father Karl was a longtime acquaintance of Countess Sofia Stroganova, and therefore the Countess's intercession determined to a greater degree the fate of the future officer.

In the Lyceum Danzas stars from the sky is not enough. The teachers did not inspire enthusiasm and was considered lazy. Often he was just somewhat detached from everything and immersed in his own thoughts. Being clumsy, red-haired, too large for his age and wide at the shoulders, which is why he constantly clung to the corners, almost tearing them apart, Constantine quickly gained the nickname Bear. As it later turns out, being immersed in the “real deal,” Bear showed himself from the most unexpected side. However, even then few people decided to unleash Danzas. Peacefully dormant in his dreams, the Bear for an insulting tirade in his address not only vividly answered with sharpness or reciprocal taunts, but easily put his fists in motion. And no one wanted to please under the bear fist. 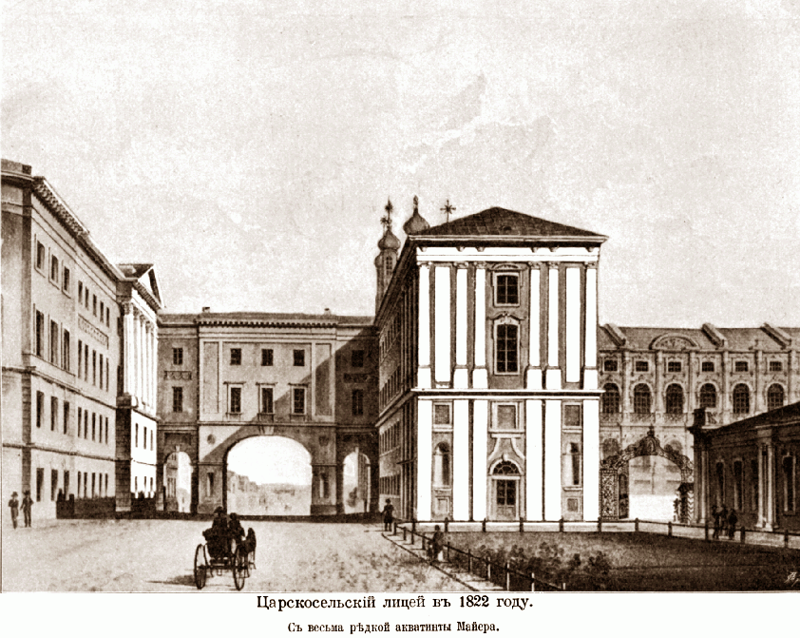 Tsarskoye Selo Lyceum from the time of Danzas and Pushkin

Despite the fact that Danzas closed the list of high school students in terms of academic performance, everyone emphasized his desire for art. He was even listed in the editorial office of the Lyceum Sage magazine. Constantine himself did not write, but spent, as they would say now, active work among his comrades, famous for his talent. Danzas collected and rewrote manuscripts with an elegant calligraphic handwriting and published them, almost single-handedly taking over the care of the magazine.

At the same time, Konstantin was a loyal friend, he loved to joke and always stood up for his comrades in any fight. Therefore, he won the love and respect in the Lyceum. In the poem “October 19”, which has undergone several revisions, Alexander Pushkin will write:

Finally, in 1817, Danzas graduated from the Tsarskoye Selo Lyceum, but on graduation he received the most mediocre marks and reviews. Therefore he became an officer in the army. At the same time, not to the Guard, famous for its frivolous life, but to the army in the field. However, Danzas did not feel any discouragement at all. He was just as playful, slightly absorbed in himself, and continued to look for "real business."

The service began with the rank of ensign of the Corps of Engineers in the pioneer battalions (later they would be renamed the sapper). The service was not from the lungs, especially for straight, sharp on the language of the Bear. Danzas' constant quarrels with his superiors harassed the commanders, but the favor of the lower ranks for him and the respect from the soldiers, as well as the ability to encourage in difficult moments a little joke, softened his anger. 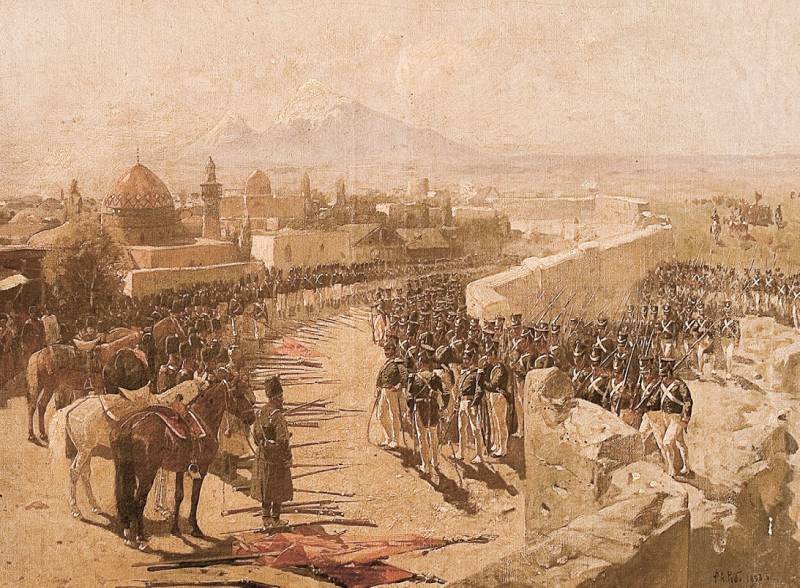 In 1826, the Russo-Persian war broke out in view of the keen desire of the Shah of Iran Feth Ali-Shana, incited by the British and hoping for turmoil after the “Decembrists” uprising, to throw Russia out of the Transcaucasus and the Caspian coast. Danzas was sent, it is possible that at his own insistence, in a separate Caucasian corps. When taking the fortresses of the Persian "governors", including Erivan (1827 year), where, traditionally, the head of the Erivan khanate was seated, Danzas showed exceptional courage.

In 1827, Konstantin Karlovich was already the captain of the Separate Caucasian Corps. And at the beginning of the same year a peace treaty was concluded, under which the Erivan and Nakhchivan khanates were transferred to Russia. However, this did not affect the military life of Danzas directly.

In 1828, another Russian-Turkish war broke out, thoroughly provoked by Porto and, of course, by European “allies” who were afraid of Russia's gain. Formed two theaters of war - one in Europe in the Balkans, and the other in the Transcaucasus and the Black Sea. Konstantin Karlovich went all the way of the war in the Balkans. He fought at Falchi in Romania, under Shumla in Bulgaria, near Kulevcha again in Bulgaria, stormed Slivno and Adrianople, where eventually the Peace of Adrianople was signed, which legitimately approved the Russians in the North Caucasus. 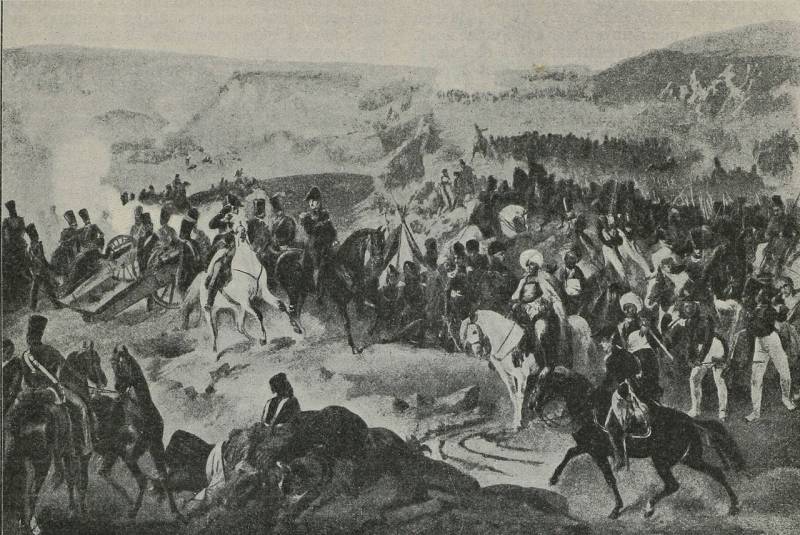 A special moment of that war for Danzas was the battle under the walls of the fortress Brailov. The fortress was given to our troops is not easy. First followed by a massive artillery preparation, then a series of unsuccessful assault attempts. And again a long shelling. During one of the storms, Constantine, who was always recklessly “addicted” to the battle, was one of the first to rush on the fortress walls. The enemy bullet landed a brave officer in his left shoulder above the collarbone. And that was not a problem if the crushing of the bone were not. This wound will remind Danzas of itself until the end of life, and sometimes even in the heat of battle Konstantin will tie up his left hand due to the breakdown of strength to keep her in tension and bouts of pain. As if this was not enough, Danzas hurt his leg so badly that the healers of that time diagnosed this injury as a "leg contusion."

For desperate bravery and faithful service, Danzas received the rank of captain. But what is extraordinarily honorable and extremely rare for such a young officer is that he was awarded the gold semi-saber "For Bravery" for the war with Turkey in 1829. The presentation of such an award is an exceptional case, and more often than not the emperor himself had to be informed of such an honor, as well as of the feat and impeccable service of the person being awarded. Later they preferred not to recall this fact, since the name of the convict looked awkward with such an award. Especially since later, in the 1835 year, Danzas was awarded a diamond ring, which could well have come from the emperor himself. 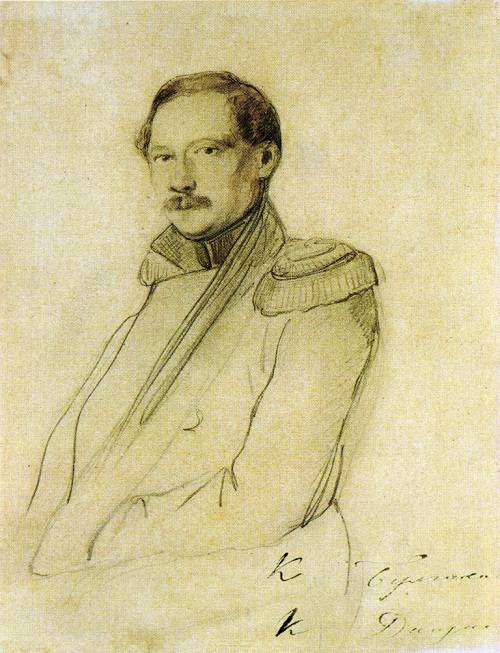 Konstantin Karlovich was truly a restless officer. He was constantly recommended either to resign, or to take some kind of grain sedentary staff position and quietly play the role of a "wedding general." But Danzas rejected such proposals categorically, despite a number of painful wounds. First, contrary to the German-French roots, he magically inherited purely Russian features. Instead of German's meticulous pedantry, Danzas was unsociable and quick-tempered to the extreme. Instead of the advertised French lightness, he had a purely Russian exacerbated thirst for justice. Secondly, Konstantin Karlovich quite realistically perceived himself and his human traits with their pluses and minuses and decided that life on suitcases in search of “the real business” was his fate. Those. in the troops, and not at headquarters, he will be much more useful for the motherland, especially since getting along with his superiors does not shine in principle.

Danzas, occasionally being a raid in St. Petersburg, of course, maintained close friendly relations with old lyceum friends, despite all the employment in the service of the sovereign. He often came to the celebration of Lyceum anniversaries. The last time, then Lieutenant Colonel of the Battalion of the Battalion Konstantin Karlovich, while in St. Petersburg in anticipation of a new appointment, came to see Lyceum comrades for the anniversary of October 1836 of the year. Pushkin was also present at the celebration.

Before the tragic shot of Dantes, who pierced not only the body of the great Alexander Sergeyevich, but also the whole life of Konstantin Danzas, remained about three months.