December 3 2018
15
The protection of mine launchers of intercontinental ballistic missiles is receiving increased attention. In this case, it is possible to combine both passive (means of fortification protection) and active means of protection (for example, air defense and missile defense systems). In the last years of the Soviet Union’s existence, the complex of active defense of silo launchers for intercontinental ballistic missiles (ICBM) under the code designation “Mazyr” was tested in the country. It should be noted here that in many respects all information about the development work on this topic is still unconfirmed and probabilistic-presumptive.


Historically, there were two main methods used to protect the ICBM silos launchers. The first was a means of countering the technical reconnaissance of the enemy (a special case is the classical disguise of objects), the second was the means of fortification protection - no less than classical reinforced concrete and armor. In connection with the development of science and technology and, as a consequence, the widespread use of space reconnaissance satellites, the first method became ineffective by the end of 1970, when it was considered that all the locations of ICBMs were already known to the enemy. The most important factor - the exact coordinates of mine launchers could not be hidden. However, it was still possible to solve some particular tasks, for example, to distort or conceal some object characteristics and characteristics from the enemy: the degree of mine’s protection from various means of destruction, the type of missiles deployed.

The fortification method made it possible to protect an ICBM from a nuclear strike even when the enemy detected targets, but only in the initial period of development of the Strategic Missile Forces. The first missiles did not differ in high accuracy and miss allowed to protect the mine from the effects and damaging factors even fairly close nuclear explosions. However, the equipment does not stand still, the accuracy of targeting warheads to the target is constantly growing, which caused a reciprocal strengthening of the fortification protection of the missile shaft - the shaft of the mine strengthened, especially the tip was protected (the upper part of the shaft, which goes to the earth's surface) there is a reinforced concrete slab to it (according to fortification terminology “mattress”). 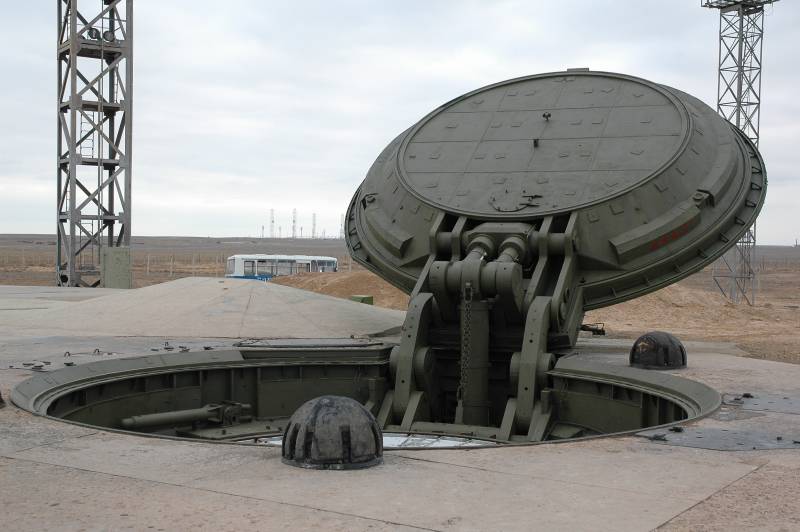 However, any protection cannot grow infinitely, everything has a limit. Such a limit comes at a time when the protective structure is located within the funnel of a nuclear explosion. In this case, whatever strength the mine has had, even if it is not destroyed, it can be thrown by an explosion to the surface along with the ground. At the same time, at the end of the 1970-ies, the silo school had a new enemy - a rapidly developing high-precision weapon. Here we are not talking about blunders in the hundreds and tens of meters, but about slips in meters and even in centimeters. With the development of military technology, it became apparent that ICBM mines are vulnerable to high-precision weapons in conventional combat gear. Adjustable bombs and rockets appeared, equipped with precision-guided systems that can effectively hit individual even small objects on the ground.

One way to protect the silo launchers was to become an active defense complex against the attack of combat units of ballistic missiles (including an ICBM), which was developed in the machine-building design bureau in Kolomna under the general guidance of the enterprise's general designer S. P. Invincible from the middle of 70 years of the last century. According to the online resource militaryrussia.ruThe chief designer of the KAZ was N.I. Gushchin. The creation of such a complex was directly supervised by the Minister of Defense of the Soviet Union, D. F. Ustinov. It is believed that KAZ was created to protect the silos of the new intercontinental ballistic missiles P-36М2 "Voivode". This material, which appeared on the resource militaryrussia, was also noted by the specialized military blog bmpd in LiveJournal. Field tests of the prototype of the active protection complex of the ICBM launch launchers developed under the Mozyr design and development work were allegedly carried out at the Kura test site in Kamchatka in 1989 (possibly also at the beginning of the 1990s).

It is believed that the creation of the necessary infrastructure for conducting a complex of tests was begun in 1980-1981, but the resolution of the USSR Council of Ministers on the development and testing of an experimental KAZ in actual conditions at the test site appeared only in 1984. As part of the implementation of the ROC "Mozyr", 250 of various enterprises representing the 22 Ministry were involved. For testing at the test site in Kamchatka, an imitation of an ICBM silo launcher was built, around which elements of a prototype of the active protection complex were located. During the tests at the end of 1980-ies at low altitude, for the first time a successful interception of an ICBM combat unit simulator was carried out, the missile was launched from the Plesetsk range, according to other sources it could be a launch from Baikonur. According to some sources, there could be several such interceptions of warhead simulators. Financing of works within the framework of the OCD implementation on the Mozyr topic was discontinued in August 1991. It is believed that the reason for the cessation of work was the lack of necessary financial resources and the general unfavorable situation in the country, the collapse of the Soviet Union and the general reduction of tension in the world. The decision to stop work could have been a purely political move. 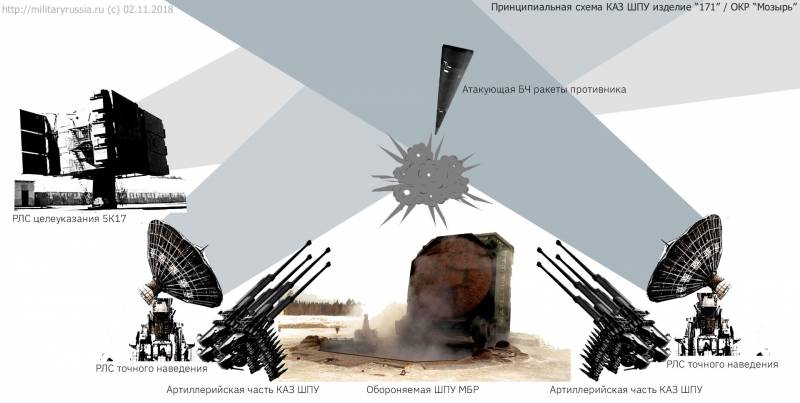 The schematic diagram of the complex of the active protection of the silos of the MBU, photo: militaryrussia.ru

The location of the tests KAZ "Mozyr" is not exactly established. There is a possibility that this could be the DIP-1 (Additional Measuring Point) facility located at the Kura strategic missile test site on the Kamchatka Peninsula. Presumably it was here that multi-staged automated systems were deployed, designed to destroy the head parts of ICBMs. After carrying out the first successful experiment with the defeat of the head of the intercontinental ballistic missile on the descending part of the trajectory, several more tests could be carried out. As academician Yu. B. Kharitonov noted, the defeat of the nuclear divided head part of the ICBM by the core elements of the KAZ should have a high degree of probability to prevent the initiation of a nuclear charge.

The principal arrangement of the active protection complex of mine launchers could be as follows: several hundred barrels with various propelling charges made of high-strength steel alloys. The speed of the encounter of the ICBM warhead with a multitude of flying missiles towards the projectiles reached about 6 km / s. Destruction of the warhead was mechanical. Synchronized by the automatics of the complex, the salvo ejected charges towards the target with a volume cloud of a certain density. The system was equipped with an electronic target detection, guidance and salvo system. At the same time, the control system of the KAZ created in the framework of the design and development work on the Mozyr theme was fully automatic and, most likely, could operate without operator participation.

Information about this project of the late Soviet weapons system practically did not appear in open sources of information, until at the end of 2012 this project was mentioned in the Izvestia newspaper and other Russian media, which reported on the possible resumption of work on the creation of KAZ silo ICBM launchers. This was reported by Izvestia with reference to a high-ranking source in the Russian military department. 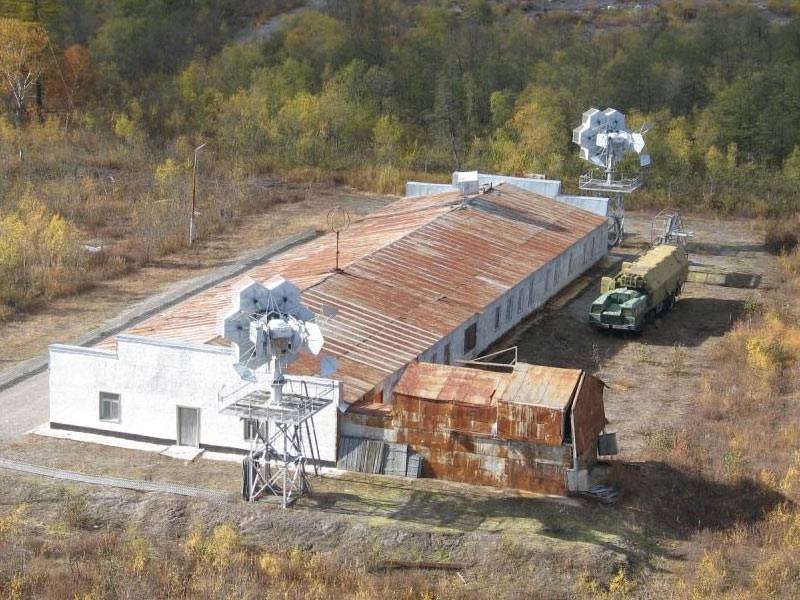 Facilities at the site DIP-1 in Kamchatka, where, possibly, they were tested in the framework of the design and development work "Mozyr", photo: militaryrussia.ru

The article also cited some features of KAZ. In particular, it was stated that the defeat of various air objects occurs with metal projectiles in the form of arrow-darts and balls with a diameter up to 30 mm at an altitude up to 6 kilometers. These missiles are fired towards the target with an initial speed of 1,8 km / s, which is comparable to the speed of the shells of the most long-range modern guns. Projectiles released to the target form a real “iron cloud”, while in one volley there can be up to 40 thousands of various destructive elements.

According to Izvestia journalists, KAZ is intended to cover point objects from air strikes, which, in addition to ICBM launchers, also include communications centers and command posts. The Russian military expects that the complex will effectively be able to destroy not only the combat units of ballistic missiles, but also other types of aerial targets, first of all, samples of modern high-precision weapons, including GPS-corrected bombs and cruise missiles of a potential enemy. A newspaper source noted that cruise missiles and precision bombs are more difficult to detect, as they actively maneuver and can hide in the folds of a terrain. With intercontinental ballistic missiles, everything is easier, they are easier to detect and calculate the trajectory, despite the significantly higher speed of flight.

A representative of the Russian military-industrial complex familiar with similar projects told the newspaper that the first complexes, which were tested at the beginning of 1990, could not hit different types of air targets with the same efficiency. However, the current level of development of radio electronics and computing technology makes defeat a complex of cruise missiles and adjustable bombs achievable. He explained that the KAZ “Mozyr” tested in Kamchatka could already hit the head parts of ballistic missiles, the project was once abandoned for technical reasons. 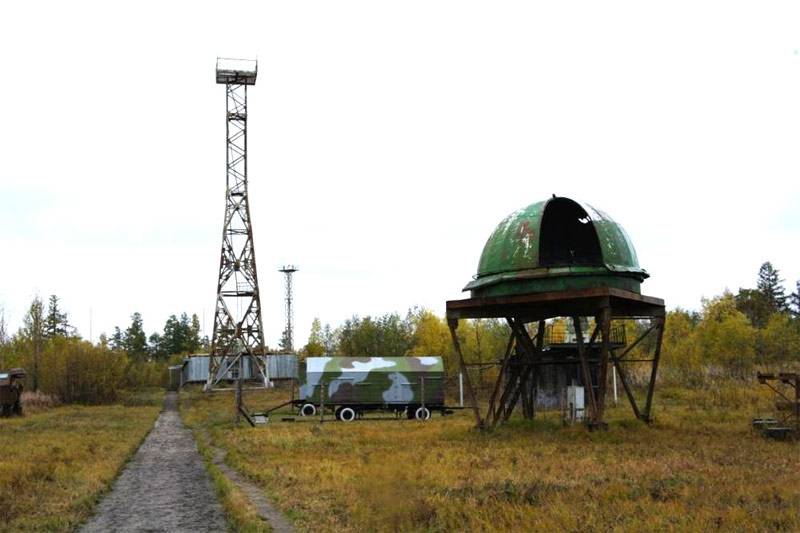 Facilities at the site DIP-1 in Kamchatka, where, possibly, they were tested in the framework of the design and development work "Mozyr", photo: militaryrussia.ru

Explaining the form of damaging elements that can be used in KAZ, a representative of the Russian defense industry, explained that at lower altitudes balls are more effective, at large heights - arrows. “The arrows fly higher, and the balls in the form of balls have a denser volley. Due to the very large counter-velocities, there is a possibility that the air target can simply be riddled, and it is necessary to destroy it or provoke detonation. Therefore, the combined types of elements increase the damaging abilities of the complex, ”the specialist noted. The current state of the project and some work in the field of creating a KAZ to protect the silos for intercontinental ballistic missiles in the Russian press have not been mentioned recently.