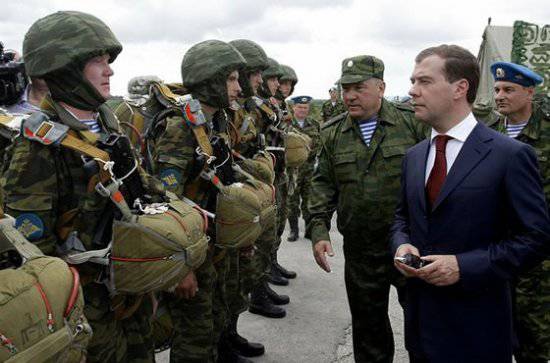 The structural transformations of the Armed Forces of the Russian Federation, which envisage the creation of four joint strategic commands and a unified system of material and technical support, are aimed primarily at improving the management structure of the Armed Forces.

The number of command and control units in the Armed Forces of the Russian Federation is reduced to three - the Joint Strategic Command, operational command, brigade. This is a positive factor, since the success of any operation depends on the effective command and control of troops in the theater.

The main headquarters of the branches of the Armed Forces - the Air Force, Navy and Ground Forces - will remain in the new structure of the Russian army, however, some of their previous functions, as well as the corresponding forces and assets, are transferred to the operational subordination to the Joint Strategic Command. This is also in line with the new realities, since in the projected large-scale military conflicts all means of attack will be used, including land, sea and aviation component. It is necessary to answer these challenges in the theater of operations with adequate means on land, at sea and in the air as soon as possible. Moreover, it is possible that the military operations will have to be conducted simultaneously on several theater of operations. In this case, the creation of the United Strategic Command is all the more justified.

The second most important issue to be resolved in order to match the Russian army with the new challenges and threats of the 21st century is its equipment with modern armament and military equipment.

Currently, the state weapons program for the period 2011-2020 has reached the final stage of coordination. Initially, the amount of funding for the state program was discussed within the amount allocated by the Ministry of Finance in 13 trillion rubles. According to reports, the current decision has been made to allocate 2011-2020 for LG. a half times the amount, that is, 19-20 trillion rubles.

In accordance with the HPV 2011-2020. For the Russian Armed Forces, over 10 years more than 500 new aircraft of various types, 1000 helicopters and around 200 new air defense systems should be delivered. In the field of air defense in the future it is necessary to create a unified system of aerospace defense, combining the capabilities of air defense and missile defense. In the field of military aviation, in addition to work on the fifth generation fighter (PAK FA), work should begin on a promising long-range aviation complex (PAK DA). Work will continue on the prospective DRLOI complex.

The bulk of military products for the Russian army will be purchased from domestic manufacturers. For those types of military hardware, where the Russian defense industry cannot yet offer modern competitive products, it is planned to purchase weapons from leading Western manufacturers, and this will mostly be done in the form of a joint venture in Russia with the transfer of appropriate technologies.

In terms of weapons modernization, the Ministry of Defense has to solve very large-scale tasks, since in the past 20 years the army has received only a few samples of modern weapons. In this regard, even within the maximum amount of funding HPO 2011-2020. in the amount of 19-20 trillion rubles, the funds for equivalent modernization of weapons of all types and types of troops is not enough. Therefore, priority programs should be defined for the rearmament of the Russian army before 2020.

To preserve parity, first of all, it is necessary to develop and modernize strategic nuclear deterrent forces within the limits defined by the new START treaty.

The second priority is precision weapons. It should be noted that the arsenals of precision weapons in non-nuclear equipment in the United States have reached enormous proportions and are constantly being improved.

The third priority is the automated control systems (ACS) of the troops. It is necessary to create on the basis of specific ACS a unified management system to ensure the possibility of conducting network-centric combat operations. ACS must have an open architecture, which will increase its capabilities in any direction.

The fourth priority is all types of aviation technology. This segment largely determines the military potential of each specific state. Military transport aviation should become a special development priority in the military AT segment, since, given the current strength of 1, a million military personnel of the Armed Forces of the Russian Federation cannot hold equal strength groups in all strategic areas.

It is also necessary in the shortest possible time to close the gap with the leading Western countries in the development of UAVs, individual sets of weapons for military personnel, and individual samples of naval and armored vehicles. Potential partners of the Russian Federation for these programs can be France (VMT and military equipment), Germany and Italy (VMT and armored vehicles), Israel (UAV).

An assessment of what the Russian army will be at the turn of 2020 of the year can be most clearly illustrated by the example of aviation technology.

Summarizing the data available in the open press, it can be assumed that in the LG-2011-2020 years. The following purchases of military AT will be included:

- An-70 (50 units, assessment based on requests from the Airborne Troops Command and the BTA);

- Su-35C (48 units ordered with delivery up to 2015 year, it is possible to purchase an additional batch in case of a delay in the PAK FA program);

- Su-27CM (12 units ordered for delivery in 2010-2011, the possibility of purchasing an additional batch in case of a PAK FA program is possible);

- Su-30МК2 (4 units ordered for delivery in 2010-2011, the possibility of purchasing an additional batch in case of a PAK FA program is possible);

- Su-25UBM / Su-25TM (installation batch of 10 units., An order for an additional batch is possible, estimated at least 20 machines);

- A new DRLOI aircraft (state tests are scheduled for 2014 year, the initial delivery volume of up to 2020 is predicted in 2-3 units);

In general, the above calculation (from 500 to 600 machines) will coincide with the stated plans in the framework of the HPV 2011-2020. for the supply of new aircraft for the Armed Forces.